Just when you thought Thomas Markle, Sr. had finally gotten his daughter’s message and signed onto the program, out he comes and, dear God, has he come out swinging!!! In his latest interview with The Mail On Sunday, published on August 31, 2019, Mr. Markle is his usual obtuse, amnesic, scornfully abusive, narcissistic and defiant self. And, he came to settle scores. Highlights…

Mr. Markle was not hesitant in expressing an opinion about the recent flogging his son-in-law and his daughter, the Duke and Duchess of Sussex, have received over their recent use of private jets: “[T]hey brought this on themselves”, he agreed with their critics, adding, “You can’t say one thing and do another.” Apparently, there is a parallel here to the way Mr. Markle believes he has been treated by his daughter, her husband and royal in-laws, and he is quick to elaborate upon it:

“Everyone raves about how gracious and wonderful they are, but they are not wonderful to their own family. That’s hypocritical. You can’t portray yourself as being charitable and bringing people together and then ghost your own father and your entire family. Their treatment of me has left a lot to be desired. I’ve still never met my son-in-law. Why couldn’t Prince Harry have got on a plane and flown to see me to ask for her hand? He obviously has no problem getting on private jets. If he wants to come and see me on a private jet, there’s an airport near here in Tijuana, and San Diego is just over the border. There are dozens of commercial flights from England to San Diego and Los Angeles every day.” 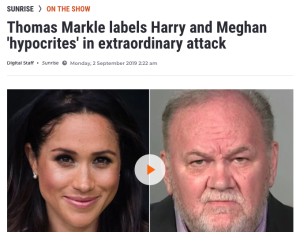 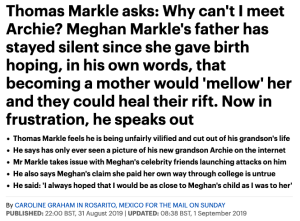 Mr. Markle claimed the Duchess of Sussex lied when she said in a speech in Fiji that she would not have been able to afford the cost of attending college at Northwestern University without financial aid. “Most upsetting” and “Not true”, said Mr. Markle, who claimed he remained silent at the time because Duchess Meghan was pregnant. [This in spite of the fact that he gave at least three interviews between the announcement of his daughter’s pregnancy in October 2018 until the child’s birth in May 2019.] “ I paid every penny of her tuition and I have the bank statements to prove it. I paid for her trips to Spain and England. I paid for her internship in Argentina. No father deserves this kind of abuse when he’s been that good to his daughter”. 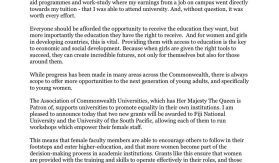 Mr. Markle is not interested in waiting for the Duke and Duchess of Sussex to forgive him. ‘I’m sick of the lies. I’m sick of being vilified and shut out of their lives. I always upheld my responsibilities as a father. Meghan’s comments about paying her way through college are offensive to me. I don’t want anything from Meghan or Harry but I’m not going to shut up until the whole truth is out there. I will continue to contradict anything said about me that isn’t true. I have to stand up for myself. I’m going to carry on speaking and I’m not going to shut up.”

Mr. Markle appears unable to grasp the very simple fact that the more he talks to the media, the less the likelihood that he will get what he is trying so hard to convince the world that he wants — i.e., reconciliation with his daughter and the opportunity to see his grandson and, perhaps, be a part of his life. Mr. Markle does not seem to understand, either, that he is fast approaching a point of no return, that point at which too much damage has been done and there is no longer a relationship to repair. But is there such a point? Or are we forever stuck with family in a no-win situation because, as the old saying goes “we can’t do with them… and we can’t do without them”.

Specifically, if you are Meghan Markle, the Duchess of Sussex and Princess of the United Kingdom, the newest member of British royalty against whom a largely racist/sexist British media has unleashed a sustained, vile and public campaign of hate, abuse and intimidation, what do you do when your white father and his white children, for the proverbial thirty pieces of silver, turn you into their meal ticket by joining forces with the racist/sexist hate mongers aligned against you?

This article is about how Duchess Meghan’s white family has tried to use her fame to make money and especially how Samantha Grant, her jealous, mean-spirited and evil half-sister, has duped their befuddled and unwitting father to join in a campaign of hate that has netted her thousands of dollars.

On May 19, 2018, approximately 1.9 billion people watched Meghan Markle walk, by herself, part way down the aisle at St. George’s Chapel, Windsor Castle, to get married to Prince Henry Charles Albert David a/k/a Prince Harry, sixth in line to the throne of the United Kingdom. Her father, Thomas Markle, Sr., had been expected to walk his daughter down the aisle. But, on the morning of Thursday, May 17, 2018, two days before the wedding, Meghan Markle issued a terse statement via Kensington Palace.

“Sadly, my father will not be attending our wedding. I have always cared for my father and hope he can be given the space he needs to focus on his health.”
“I would like to thank everyone who has offered generous message of support. Please know how much Harry and I look forward to sharing our special day with you on Saturday.” 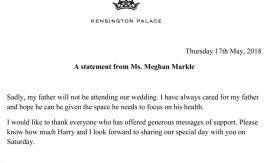 A statement from Ms Meghan Markle

As many on Twitter were quick to observe, this was not the expected heart-rending statement from a loving daughter about a father who had reportedly suffered a heart attack, literally on the eve of her wedding into the most prominent family in the world. But then, by this point in her pre-wedding preparations, there was nothing “expected” about the Markle clan. In any case, as subsequently revealed, there was not much Meghan Markle could say, having learned of her father’s claimed heart attack the same way the rest of the world did — from blazing tabloid headlines following her father’s interview published on the American celebrity news website, TMZ, which, for a time, seemed to be Mr. Markle’s preferred avenue of communicating with his daughter. Actually, as eventually disclosed, Mr. Markle was on speed-dial to Sean Mandell, a TMZ reporter with whom Mr. Markle exchanged text messages and phone calls several times daily, in blatant contravention of the advice of his daughter and soon-to-be son-in-law, Prince Harry.

The announcement was the culmination of frenzied speculation about whether or not Mr. Markle would even attend his daughter’s wedding, much less walk her down the aisle. And it all started with the embarrassing disclosure that Mr. Markle had conspired with a paparazzi photographer to pose for photographs showing him as “casually” preparing for his anticipated trip to Britain for his daughter’s wedding. The photographs were subsequently sold to British tabloids for publication as candid shots taken without Mr. Markle’s permission.

Although the photographs were reportedly sold for as high as one hundred thousand British pounds, whether and how much Mr. Markle was paid was not initially disclosed. In fact, Mr. Markle played coy about this issue and all he reportedly said during a May 14, 2018 interview with TMZ, was that “he had a reason and it was not principally about money”. Samantha Grant, Mr. Markle’s oldest daughter and Meghan Markle’s nemesis and half-sister (yes, in that order), eventually disclosed that her father was paid a mere pittance, fifteen hundred dollars ($1,500.00), for photographs that have been at the heart of a most painful and public breakdown of what was once a loving father-daughter relationship.

In that May 14, 2018 interview with TMZ, Mr. Markle announced, without any prior warning to his daughter, that he was pulling out of the wedding, citing his embarrassment over the paparazzi photographs. For several weeks leading up to the wedding, the British media had been on a “will he or won’t he” watch… Will Mr. Markle attend his daughter’s wedding? Has he been invited? If he does, will he walk his daughter down the aisle or will Doria Ragland, his ex-wife and the bride’s quiet and dignified mother who was rumored to have already met the Queen, have that honor? Predictably, as soon as Mr. Markle issued his withdrawal, the British tabloids pounced, with Pierce Morgan (yes, the very same Pierce Morgan) screeching in a tweet with a link to the full article: “Shame on you, Thomas Markle. By staging these paparazzi photos you’ll have broken Prince Harry’s trust and your little girl’s heart”. 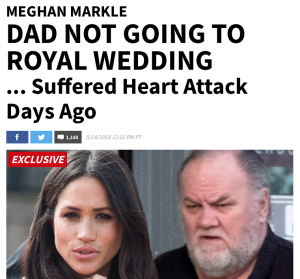 As the media frenzy gathered steam, Samantha Grant (now conveniently calling herself Samantha Markle) stepped in to claim full responsibility for the paparazzi debacle. In an interview on May 14, 2018 with ITV Monday and on Twitter (what else?), Samantha Grant claimed the photos were meant to create a “positive” image of her father and not for profit:
“The bad press over my father doing staged photos is my fault. The media was unfairly making him look bad so I suggested he do positive photos for his benefit and the benefit of the royal family. We had no idea he would be taken advantage of. It was not for money @KensingtonRoyal.” 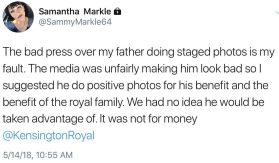 For context, Samantha is Thomas Markle’s oldest child. She was married twice and has previously gone by her married names — Rasmussen and Grant. However, once Prince Harry and Meghan Markle’s relationship became public, Samantha Grant immediately switched back to the name Markle. She has used different aliases in the past – Yvonne Hale, Yvonne Rasmussen, Samantha Rasmussen, for example, and has also used the middle name Marie.

8 comments on “Monetizing Meghan, The Duchess of Sussex Part 1”

Exclusive: We published our report on the coordinated hate campaign targeting Harry and Meghan, Duke and Duchess of Sussex. We illustrate the conspiracy, and we believe it is the most comprehensive and damning report on this topic.

You can read it here: https://botsentinel.com/newsroom/reports

Thank you, Prince Harry and Meghan, The Duke and Duchess of Sussex, for providing local Black-owned food trucks for @TheKingCenter’s King Day Community Service Project volunteers today. I’m so grateful for your graciousness in honoring my father. #MLKDay #BelovedCommunity

The real story the #Royalfamily wants to deflect attention from. #PrinceAndrew’s connection to convicted pedophile #Epstein wasn’t casual. He had multiple phone numbers to reach #PrinceAndrew . This is the stuff the head of #ChurchofEngland abides and defends. #Thequeensvalues

The moment @ranvir01 leaves voicemail for Prince Andrew after getting his number from Ghislaine Maxwell’s little black book. Having been through it myself, there are some fascinating entries in it!

From ITV’s “Ghislaine, Prince Andrew and the Paedophile”:

Beyoncé And Jay-Z Pay Tribute To The Duchess of Sussex

Betty isn't too old to be called because she's don

You remember how quickly a statement came from #bu