In Amsterdam today[September 3, 2019], The Duke of Sussex launched Travalyst,

a global initiative striving to change the impact of travel, for good. Partnering alongside key travel industry giants @Bookingcom, #Ctrip, @Skyscanner, @TripAdvisor and @Visa_US, our aim is to spark a movement to transform the future of travel, putting communities at the heart of the solution. 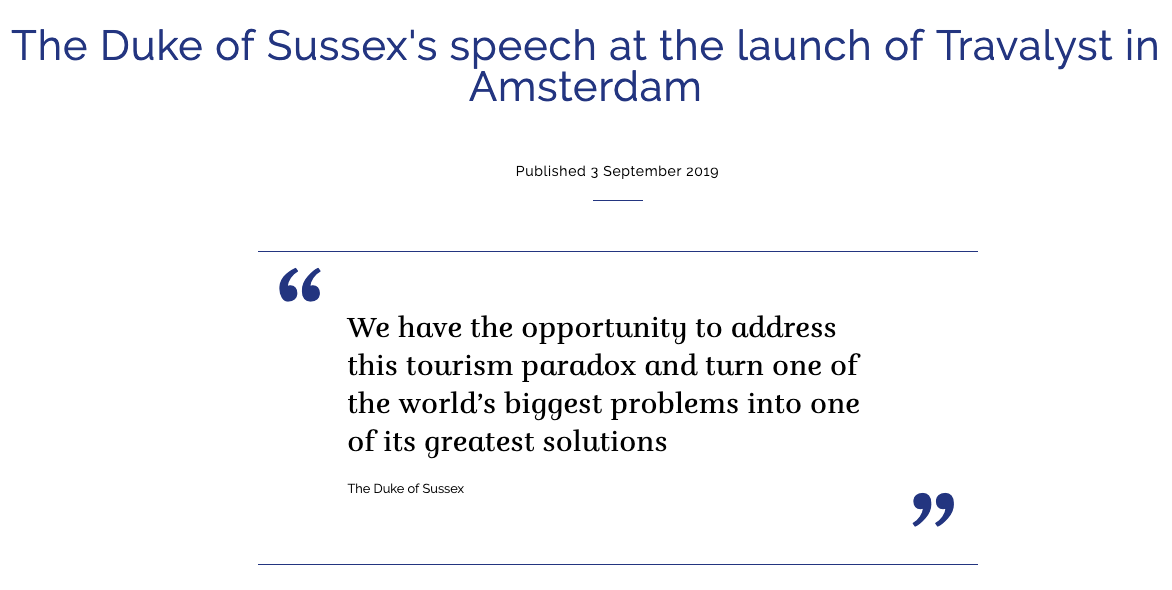 To the surprise of everyone, The Duke of Sussex announced the launch of the Sussex Royal latest initiative Travalyst, which was over two years in the making. What is not a surprise to many, is the Duke’s continued commitment to work with others to address the climate change crisis. In a recent interview with Dr. Jane Goodall published in the September 2019 issue of Vogue UK, (Guest-edited by The Duchess of Sussex), the Duke shared that his concern for the environment has been a long time in the making and came about from the people he met and the places he visited in his travels.

The name #Travalyst comes from The Duke and partners viewing our role in sustainable travel as catalysts to accelerate positive changes in travel; hence Travel + catalyst = Travalyst.

The Duke of Sussex stated it was a remark from a child he encountered on an engagement to the Caribbean to observe a coral reef replanting project in 2012, that served as the catalysts for the initiative.

“I had a seven-year-old come up to me, tug my shirt, and say with such conviction: Because of your country, my country’s coral reef is dying.”

Initially the child’s comment did not seem to be related to tourism, but it did cause The Duke of Sussex to think and try to better understand the relationship and impact visitors can have on a community. Whether the travel is abroad or local, the disconnect between travelers, the community, and the environment is alarming.

Through the formation of Travalyst, the Duke of Sussex has brought together travel industry leaders with the aim to make travel more sustainable by helping to protect destinations, benefit communities, and assist consumers in making more environmentally friendly travel choices. He believes that the organizations – with operations in nearly every country, hundreds of millions of customers that use their products every day, and business relationships around the world – have sufficient influence and the critical mass necessary to catalyze real system change in the travel industry, for the benefit of destinations, communities and ecosystems.

Travalyst answers the wishes of travelers to have a positive impact on the locations they visit. The majority think companies should offer more sustainable travel, funnel the money spent back into the local community and while offering experiences representative of the local culture. By partnering organizations dealing directly with travelers, these organizations are positioned to drive systemic change in the industry. They will work together to create incentives for organizations and destinations to protect the places they visit and open consumers to the benefits of helping local communities to benefit.

Having said that, we cannot address this new initiative without acknowledging the timing of the British media’s recent outrage about the Sussex family mode of travel. Is it a coincidence that the media once again whipped themselves into a “frenzy” this time expressing outrage at the Sussexes “hypocrisy” in traveling by private jet when they “preach”about the environment?

To those who are observing the media’s manufactured outrages (guest editing a magazine, asking for privacy for their son, etc) about all things Sussex, the outcry about the Sussex travel to Nice seems to be another contrivance. Initially the outrage was the cost of travel and damage to the environment in traveling via private jet supposedly after claiming everyone must do what they can to protect the environment. Then Sir Elton John shared that it was his private jet which transported the Sussex family and he had made contributions to offset their carbon footprint.

The media outrage about the environment damage and labeling the Sussexes as “hypocrites” is baffling. The Duke of Cambridge and the Prince of Wales are equally committed to the environment and both use private jets frequently. The Duke of Cambridge has been known to fly a helicopter from his home in London to his home in Norfolk. He flew by private jet to the climate change forum in Davos; and this summer the Cambridge family vacationed in Mustique, a private island in the Caribbean, that can only be accessed by private charter – NO MEDIA OUTRAGE. While we don’t know about his concern for the environment, Prince Andrew and his former wife Fergie, took a private jet to and from Balmoral to vacation in Spain – NO MEDIA OUTRAGE. It has been reported that the Prince of Wales finds flying first class on a commercial plane uncomfortable and prefers to use a private carrier. So, if all the Royals travel by private jet, some also while advocating for the environment, why are The Duke and Duchess of Sussex being singled out?

Despite their cries about the Sussexes impact on the environment, the conviction that the media was not truly concerned about environmental impact was strengthened when, days later, the media just happened to get a photo of the Cambridge family traveling by commercial carrier to Balmoral. The Cambridges were lauded for their frugality and their “down to earthiness” with no mention of the carbon emission. Any doubt that the outrage towards the Sussexes had never been about the carbon emission, was immediately removed when the “Scotsman” newspaper published a story that the Cambridges’ frugal travel plan had been more damaging to the environment because the airline flew two empty planes, nearly five hundred miles, to accommodate their last minute request. The same tabloids that excoriated the Sussexes, ignored the environmental impact and made excuses for the Cambridges. So the media outrage was never about their concern for the environment, it was to shed a negative light on the Sussex family.

Then on September 3rd, The Duke of Sussex announced the launch of his travel initiative, Travalyst. The logical conclusion was to wonder if the Media’s fake outrage about the “Sussexes’ hypocrisy” had been the “media’s hypocrisy” in using concerns about carbon emission in an attempt to derail the launch of the Sussex’s latest project. While we can agree that they did not succeed in derailing the project, they are once again a footnote in the launch with headlines mentioning the initiative was being launched not long after the “media’s criticism”. It should be noted that the initiative was years in the making, the media’s faux outrage is only days old.

While we accuse the media of nothing, the evidence is pretty damning and there is precedence for actions. Had they been truly concerned, they may have wondered why the Sussexes chose to travel by private jet fully aware that they frequently travel via commercial carrier. The media chose not to wonder, but for those who did wonder, they considered past actions and current situations and drew a logical conclusion. Today, after the launch, the team took questions and the Duke of Sussex confirmed our conclusion:

“I came here by commercial. I spent 99% of my life traveling the world by commercial. Occasionally there needs to be an opportunity based on a unique circumstance to ensure my family are safe and it’s genuinely as simply as that.”

Duchess Meghan’s surprise appearance at the WE Day UK