Sabotage is the destructive or obstructive action carried out by an enemy with the intent to hamper or hurt. Smear is an unsupported charge or accusation against a person. Vilify is to make slanderous and abusive statements against something or someone in an attempt to lower its importance. Every project or initiative presented by the Duke or Duchess of Sussex is subjected to sabotage, smear, and definitely vilified by the sanctioned royal gossipers, also known as royal reporters. This is their area of expertise, they excel in sabotage, smear, and vilify.

Prince Harry explained to an audience at the launch of his recent initiative, that he uses commercial flights 99% of the time, but there are occasions when the safety of his family takes priority and he doesn’t use commercial flights. Rebecca English reports, “Harry defiantly insists that he will continue to travel by private jets claiming “his family” wouldn’t be safe on a commercial plane.” The audio of his statement is available on YouTube. There is absolutely no defiance in his voice and he really didn’t say his family would not be safe on a commercial plane. Sabotage, Smear, Vilify.

Of course the royal reporters piggyback on one another, why be original; Chris Ship retweets Russell Myers inaccurate statement concerning the trips to Ibiza and Nice. Russell Myers retweets the Sky News misinforming article which was written by none other than Rhiannon Mills. Even though he knew the article to contain misinformation, he justifies his involvement by stating, “He was only there for the comments.” Sabotage, Smear, Vilify.

Of course, the fact that the Sussexes traveled to Ibiza via NetJets is carefully put under the carpet to fit the “hypocrisy” narrative. 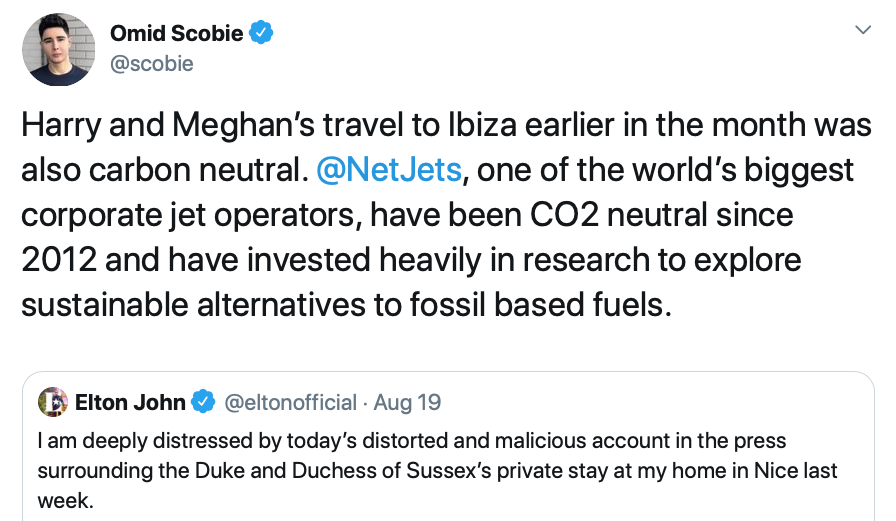 When responding to the complaints concerning their trip to Nice, Sir Elton John shared that he provided the private jet the family used and stated, ”To support Prince Harry’s commitment to the environment, we ensured the flight was carbon neutral by making the appropriate contribution to Carbon Footprint.“

Why bother to mention the “vacation” flights were eco-friendly. The photo of the Cambridge family boarding a commercial plane was obviously orchestrated and coordinated by KP public relations, also known as royal reporters. Thomas Markle decides to give an interview after a brief period of silence, branding the Sussexes as “hypocrites” for traveling on private jets, the day before the Travalyst initiative was released. Sabotage, Smear, Vilify.

Everything the Duke and Duchess say or do and oftentimes what they don’t say or do, is subjected to sabotage, smear, and vilify. You can count on the royal reporters – KP public relations team, to discredit their every move.

The Duchess is returning from maternity leave soon. The Duke has been working nonstop. There’s a 10-day tour on the horizon. Best wishes Sussex and #Sussexsquad and prepare yourselves, the vileness is coming!

Duchess Meghan’s surprise appearance at the WE Day UK