Grant has used Twitter masterfully, in conjunction with the British tabloids, in her virulent and mean campaign of hate against Duchess Meghan. Her Twitter posts are replete with insulting, belittling, and denigrating epithets, such as “DUCHASS”, “Cruella de Vil”, and Duchess of Nonsense”, all no doubt intended to put her biracial half-sister in what Grant considers to be her proper place. Additionally, Grant is not only an enabler and facilitator of the British tabloids, but she is also the darling of internet trolls and Megxiters who are engaged in a sustained, cynical and dark campaign of hate, humiliation and “othering” of Duchess Meghan, the clear intention being to hasten her exit, by whatever means, from the royal family. In engaging these dark forces, Grant is unfazed and unconcerned about the personal physical danger to which she may be exposing Duchess Meghan, who she claims to be “family”.

In no particular order, some of Grant’s greatest hits… 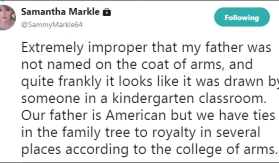 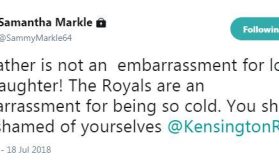 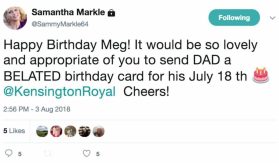 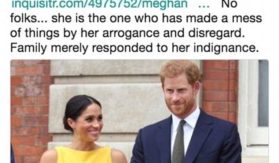 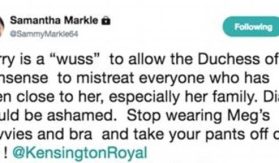 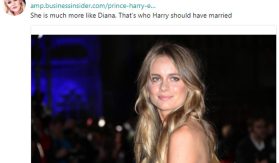 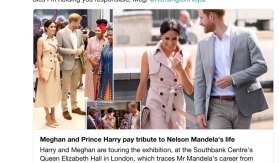 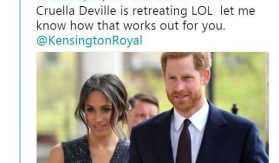 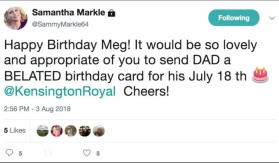 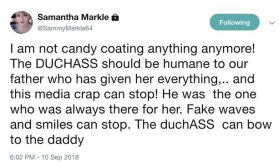 Here, it is worth mentioning that Samantha Grant has also shamelessly tried to use her disability in her predatory monetizing of her tenuous filial relationshp with Duchess Meghan. As one on-line observer pointed out: “Samantha and her ex-convict boyfriend… both twit about her supposed disability to shame TRH Duke and Duchess into making contact with the Duchess estranged stepsister. The disability related twits escalated to claims that Samantha was not only disabled due to MS but also that she was a disabled veteran who should have been included in the Invictus Games, an annual event created by Prince Harry”.

Following the engagement announcement, with the media fixated on who would be invited to the wedding, Samantha wrapped her alleged disability tightly around herself in the hopes of generating sufficient public sympathy to snag an invitation to the wedding. Her response to whether she would attend the wedding if invited was typical self-serving: “I’m in a wheelchair”, she gratuitously lamented, “I don’t know that it’s that easy to travel. But if I were invited I would find a way, out of love and respect”, adding, “I would never be disrespectful or make her feel that I wasn’t sharing her joy. I would be honored to go — but that will come down to Meghan and her heart. It will be what it will be.”

Fast forward to September 25, 2018… After months of sniping at her half-sister, the same wheelchair-bound Samantha Grant informed the world that she was in Italy. From Italy, Grant’s publicist (yes, with the money she made or anticipated making off her half-sister’s fame, the once-bankrupt Samantha Grant could now afford a publicist), in an obvious headline-generating stunt, announced to the world that Samantha Grant was on her way to the U.K. “to confront” Duchess Meghan:
“After making numerous attempts in private to arrange a one on one meeting with The Duchess of Sussex to discuss their 74 year old father’s health, Kensington Palace have refused to respond. I fear Meghan may not be made aware of these discreet attempts and therefore making this public is the only option we have left. I currently have Samantha in Europe with just one short flight away. This DOESN’T need to be public, we would prefer to keep this private. Samantha is coming to the UK this week, like it or not[.]” 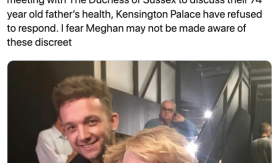 It all came to a head in September, when Grant arrived in London and proceeded, with much media fanfare, to visit both Buckingham and Kensington Palaces in her effort to “confront” her royal half-sister. The “confrontation”, as anyone could have predicted, ended at the gates of Kensington Palace where Grant was turned away. Grant was photographed holding an envelope, which she claimed to be a letter to Duchess Meghan, towards a uniformed guard. Of course Grant got what she wanted the most out of this contrived non-event – a few days in the news cycle, as well as something she did not want or anticipate — the dubious honor of being placed on the police royalty and protection unit’s “fixated persons list”. Translated, Grant is now deemed to be someone who poses a “reputational risk” to the British royal family. 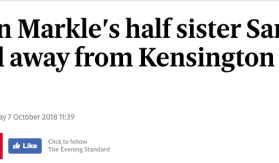 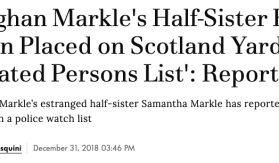 One comment on “Monetizing Meghan, The Duchess of Sussex Part 6”

The Sussexes: An Influential Royal Couple