In any case, Grant has done quite well monetizing her half-sister. For example, for Prince Harry and Duchess Meghan’s royal wedding, Samantha Grant reportedly hosted a media-sponsored viewing of the wedding in her home for which she reportedly earned six figures. Grant herself has openly boasted of her right to sell her story for a minimum of fifteen hundred dollars ($1,500.00). Her standard hourly rate for media appearances is reportedly two thousand dollars ($2,000.00). And, in the lead up to the birth of Master Archie Harrison Mountbatten-Windsor, Prince Harry and Duchess Meghan’s first son, the Mirror reported that Samantha Grant could earn up to one hundred thousand pounds through participation in talk shows, interviews, a book, and other media appearances. Bristling with false indignation, Samantha Grant shot back through an unidentified source:

“Samantha has every right to celebrate the birth of her niece or nephew in spring and will talk about her connection to Meghan, as they are family. She does not have an outlandish lifestyle so the money will make a difference to her. She has never been given a penny by Meghan so she has every right to earn her own money in this way.” 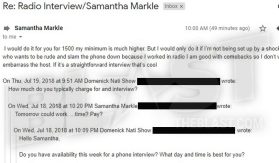 But, of course… Earning thousands of dollars from selling out the very member of your family who you are stridently and publicly excoriating for not doing right by your family is the definitive expression of family allegiance and commitment!

What was the book going to say? On tweeter, Samantha Grant would only say that Duchess Meghan would not like some of her book’s contents. But, she also suggested in the same tweet that Duchess Meghan was not “matured enough” to understand her book. Yes, you heard that right. Samantha Markle, the scam artist with limited education, no professional or job experience or life accomplishment to speak of, was writing a book about race that her better educated, more intelligent, more successful, more accomplished, well-traveled, and confident biracial half-sister, who, as a child, had herself been the victim of racial abuse by Grant, lacked the maturity to understand!

On television when asked what her book was about, Grant resorted to dissembling. In one iteration, Grant said the book would not be negative but, rather, “a beautiful and nuanced representation of my family’s lives and family home… that has to do with the interracial evolution of the country through the lens of my life in my family since the civil rights act until present, and how that interacts with the recent events with my sister”. This book about race, was also going to be a “beautiful, warm, witty story of our lives and my life”, Grant also promised.

So the book is going to be about race… That should be quite interesting. An angry, bitter, resentful and openly jealous white woman, consumed with palpable envy and loathing for her successful biracial half-sister, writing a “beautiful, warm, witty story” about racial experiences in her white father’s home, where that biracial half-sister personally experienced, and had to accommodate to, racial abuse at the hands of her white relatives, including the writer who, at the very least, used to refer to the half-sister’s black mother as her father’s maid. The media lapped it up. No questions asked. No explanations sought. Such is white privilege!

But, appearing on Good Morning Britain on October 23, 2017, and in a subsequent interview with DailyMail on November 3, 2017, Grant denied that the book she claimed to be writing was a “slamming tell-all” about Duchess Meghan, or that she ever described it as such. Grant said the title was a “mockery of the media”, denied that she ever called Duchess Meghan “self-obsessed” or “pushy”, blamed the tabloid newspapers for the sobriquet, and, in answer to a direct question, declared emphatically: “She is not pushy”. On a TLC documentary, Grant blamed the tabloids for “creating a divide” between her and Duchess Meghan; expressed sadness that the Duchess may have “believed some of the other interviews… [she] did where words . . . [she] never said were taken out of context”.

Question: How can words that were never spoken be taken out of context?

Seemingly addressing Duchess Meghan directly, Samantha Grant pled: “I just have to say, don’t believe what you read in tabloids. If you didn’t see me say it and you didn’t hear it from a reliable source, you’ve got to remember that tabloids say incredibly far-fetched, horrible things about just about everybody”.

By now, at least publicly, Grant appeared to have morphed into a one-woman cheerleading squad for her half-sister who she now described as ”lovely, charming, and very lively”, adding that “the British public may be surprised at how much Meghan could accomplish for the country if she were to marry [Prince] Harry, in terms of her philanthropy and humanitarian work”. Pointing out that “[t]here’s so much that the public does not know” about her half-sister, Grant promised that the public would be surprised “by how graceful and how lovely” Meghan Markle actually is. Her final thoughts about the couple?

“I think that together, she and Prince Harry can bring so much to their role in global outreach, as a part of the royal family and in their humanitarian efforts.”
“I think the world will be surprised and I think whether it is independently or together, they’re both such incredible people with vast bodies of life experience.”

The reason for the change in tune? Prince Harry’s and Meghan Markle’s relationship had moved so fast that, within a year of the relationship going public, the question was not whether there was going to be a royal wedding, but rather when to expect the engagement announcement. After a royal engagement comes a royal wedding. Who would not want to rub shoulders with British royalty at his/her sister’s royal wedding? But beyond rubbing shoulders, being invited to and being an official member of the wedding party would seal and legitimize Samantha Grant’s bona fides as the sister of a member of the House of Windsor (or Mountbatten-Windsor), the royal family that sits at the very top of the pecking order of the world’s royal houses. The economic opportunities are boundless, a sentiment shared in this excerpt by columnist, Jenny Johnston, of Daily Mail in the publication’s November 3, 2017 issue:

“There is little doubt Samantha is keen to promote the notion that she looks set to be the sister of ‘the first bi-racial princess in royal history’. A worthy claim to fame – were it not for the allegations that members of Meghan’s own family, including Samantha, subjected the young girl to appalling racial abuse.”

Duchess Meghan has another older sibling — a brother, Thomas Markle, Jr. Like Samantha Grant, Thomas Markle, Jr. is said to have resented his biracial half-sister who, as babies are wont to do, stole his father’s attention from her then teenage brother. However, although he was being subjected to intense media scrutiny (as in every little misstep he made, or those close to him made attracted major international media — mostly British tabloids — coverage], Thomas, Jr. did not really feature prominently in the public hissy-fit that his older sister, Samantha Grant, was throwing on almost a daily basis. That is, until Thomas Jr. wrote a letter to Prince Harry.

In the two-page hand-written letter, Thomas, Jr., joined his older sister in sounding the alarm that Prince Harry appeared not to have heard, or if he did hear, pay much attention to, thus far. Some highlights…

The letter, dated April 26, 2018, was published by In Touch Weekly, on May 9, 2018, ten days before the royal wedding. As expected, it generated banner headlines and received wall-to-wall coverage for several days leading up to the wedding. Coming on the heels of Samantha Grant’s insistence that her white family is entitled to a seat at this wedding, coming on the heels of Thomas Markle’s insistence that his daughter invite every single member of his white family to her wedding, the feeling of entitlement, of ownership of this woman of color by this white family expressed in this letter is quite terrifying. But, it received not a single mention in the media. None. 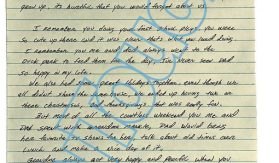 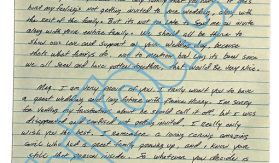 2 comments on “Monetizing Meghan, The Duchess of Sussex Part 3”

Beyoncé And Jay-Z Pay Tribute To The Duchess of Sussex