Black Lives Matter! – a resounding chant, a rallying cry, a denouncement against violence and systemic racism aimed at Black people in the United States of America. As other countries, such as The Netherlands, Denmark, Nigeria, Liberia, Canada, New Zealand, and Germany, joined with the U.S. to raise awareness, they also turned the spotlight to the racial injustices suffered in their countries, like France, for Adama Traore.

The global cry is not one of despair, but an upswell of anger and a renewed commitment to our social contract between people and their governments. The movement is a wake-up call to leaders that the status quo of lawlessness and lack of accountability will no longer be passively adhered to and must suffer consequences when violated.
Into this backdrop of protest and community building, The Queen’s Commonwealth Trust tweeted their solidarity with the Black Lives Matter movement and followed up with

“We all have the power to effect positive change. It is time to speak up and speak out. Time to have uncomfortable conversations with ourselves and with others. Time to educate ourselves and unlearn. Time to come together and build a better future as one.” 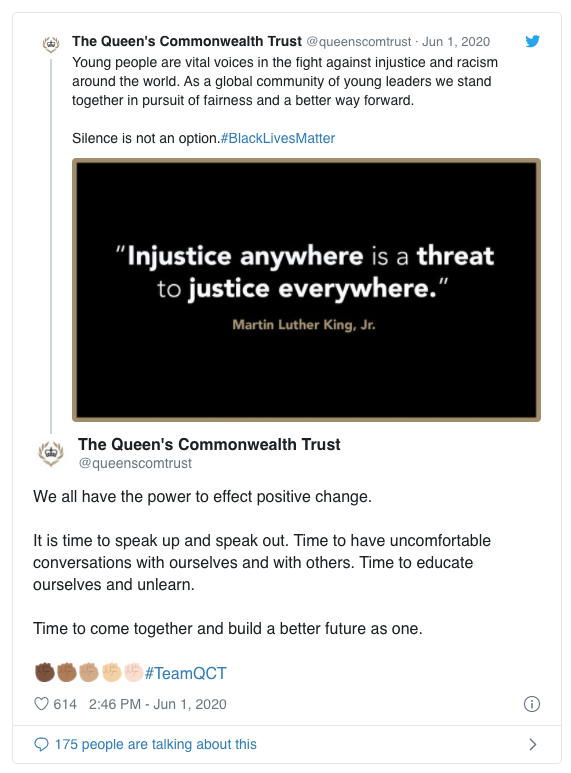 The Queen’s Commonwealth Trust (QCT) speaking on this issue is a big deal. I suspect that the trust would not have issued a statement without approval, since the Queen is the patron, and Harry and Meghan serve as president and vice-president.

Take a look at the QCT and its work. There are countless evidence that they are about walking the talk.

“The QCT is a growing network of young changemakers across the Commonwealth which consists of fifty-four countries, home to 2.4 billion people, of which 60% are under the age of 30.”

This is a body of vibrant young people who actively engage in shaping their countries’ futures.

What are the Commonwealth countries?

The Commonwealth Countries are a voluntary association of countries, almost all, formerly under British rule. It began with King George VI as the first head of the Commonwealth in 1949. Upon his death, his daughter, Queen Elizabeth II, assumed the mantle from 1952. The countries have remained loyal to the charter for the 70 years of its existence.
Under the Commonwealth Charter, the countries unite under specific values and aspirations, such as “the development of free and democratic societies and the promotion of peace and prosperity to improve the lives of all the people of the Commonwealth.”

Further, the charter affirms that “the special strength of the Commonwealth lies in the combination of our diversity and our shared inheritance in language, culture and the rule of law; and bound together by shared history and tradition; by respect for all states and peoples; by shared values and principles and by concern for the vulnerable.”

America and Britain have a shared history that has set the stage for where we are today. One activist’s response to nationalistic venom is apt for the occasion: “I am here because you were there.”

With regard to the UK, the Commonwealth and its people who reside in England have suffered under targeted immigration policies and other discriminatory actions.

Many citizens of the Commonwealth have made new homes in America and Great Britain, leading to them having, a more global mindset about humanity’s interconnectedness. The QCT, by their statement, recognized that the repeated black injustices at the hands of police and/or racists in the U.S.A. is a matter of basic human rights and a blight on world democracy.

“We champion, fund and connect young leaders who are working hard to change the world. We use our network, platform and resources…to demonstrate the leadership, energy and optimism of young people across the Commonwealth and their enormous potential to create a better future for everyone.”

—was upheld by this bold action.

Others should heed their lead and message, “silence is not an option.”

Inside A Made-Up Controversy: Prince Harry And British Vogue Edition