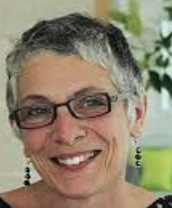 I must admit that until recently I had been spared the agony of having to read anything Melanie Philips had written. Recently Prince Harry announced that his wife was suing the Mail on Sunday and it was reported that he himself would be bringing legal action against the Sun and the Mirror on the grounds of the phone hacking scandal that has haunted the British press over the past 20 years. As you can imagine this action brought out the wrath across the media and everyone was out talking about it.

The lawsuits that are being brought up against certain sections of the British press are on specific legal issues; copyright, privacy infringement and data protection and the unethical and illegal news sourcing activities by these same people, plus issues of perjury, cover-ups and destruction of evidence. What the British press would rather people think is that, Harry is being over emotional and should learn to take valid criticism over his use of private jets while “lecturing” people about climate change.

I first saw Melanie on Sky News trying to advance this argument just like many of her colleagues had done throughout the week when Prince Harry released his statement. She then appeared on BBC Question Time to talk about this very same topic. In her view the Duchess of Sussex should behave like the Duchess of Cambridge and since she benefits from the public purse, she is not entitled to privacy as a new mother. I personally cannot fathom what she meant in either case, but not only does she attempt to strip the Duchess of Sussex of her basic fundamental human right to privacy, accorded to every individual regardless of status, she wants to remove her individuality by asking her to behave like someone else. This speaks to the extent to which people like Melanie are unwilling to accept Meghan for who she is. Now there are certain things Meghan could do to become more like Catherine. She could wear coat dresses and beige heels; she could work a little less and rather than do impact driven work she could focus on being keen and learning. She can even renounce her American citizenship. But how can she stop being a Woman of Colour?

When the Vogue September issue was released, Melanie like many of the colleagues called the edition “woke, shallow and divisive” claiming that she was delving into politics. Meghan received a ton of negative press for covering topics that included Mental Health, Environment and Conservation, Women and girls’ empowerment and education; topics that have been deemed political; woke, divisive, shallow, you name it. Again the British press were quick to remind us that Prince Harry releasing his statement when he did overshadowed a successful tour and that the couple had finally turned things around and were getting the positive press “they craved”. In the British press’s own words they had finally received positive press on a tour which covered topics such as Mental Health, Environment and Conservation, Women and girls’ empowerment and education; the very same topics that Meghan covered during her guest editorship of Vogue. So what changed to warrant the differential tone in coverage between the two events? When Prince Harry’s statement made reference to a double standard within a specific press pack this is what he meant.

And let us call it what it is; people like Melanie Philips have a problem with the Duchess of Sussex simply because she is black and that is the one thing about herself that she cannot change to become more like the Duchess of Cambridge.

She is a Jamaican-born British writer, socialite, television and radio personality who has published 3 books about the Royal Family. And she hates Meghan. There is no other way to put it. Take a look at the headlines she has generated.

When someone does not have a valid argument to make against you often times they resort to name-calling. Like Piers Morgan, this Lady Campbell has a knack for labelling Meghan and resorts to name-calling rather than articulate the ways in which Meghan has exhibited this so-called “unworthy of being royal behaviour”. It is said that name-calling is the lowest form of discourse (khairilsianipar.wordpress.com), which in its best form can have negative consequences, and in its worst form is an intentional way of holding power over someone. 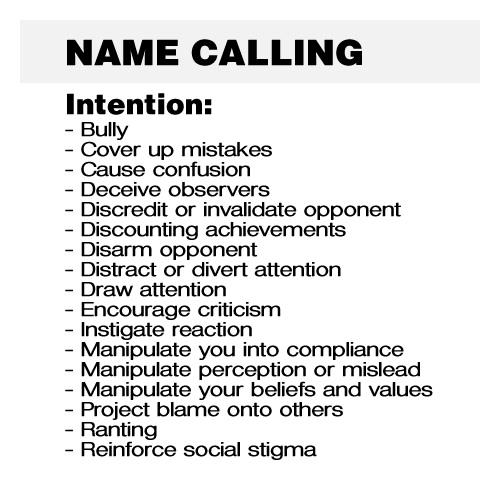 It is what it is, and Judi like Melanie, can try and argue that it is not motivated by race but none of them have offered a justifiable reason for why they feel the need to call Meghan all these kind of names. So until they do…if it looks like it’s racist and acts like its racist, it is racist.

Sarah Vine is a columnist for the British tabloid newspaper the Daily Mail. That means she has a lot to say about Meghan, so let us get right to it. 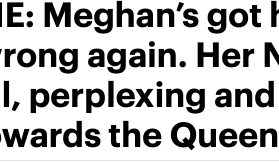 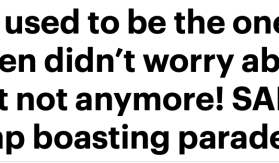 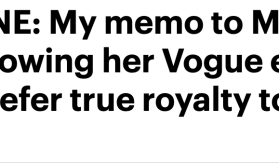 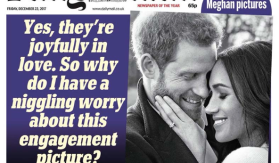 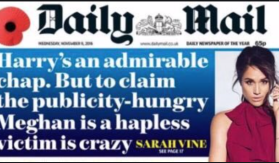 Just like Melanie Philips, Sarah Vine exemplifies those women in the British media who are constantly trying to put Meghan in a box; in which she preferably says and does things that are appealing to them. In their minds they know the rules. They know what is right for the Monarchy and speak on behalf of the diverse people across Britain. Therefore when you read comments/ narrative advanced by them on behalf of “the public”, what they actually mean is them; women like her who work in the British media and think that they can control the way the “public” sees her. These crop of women’s incessant need to constantly judge another woman whom they DO NOT KNOW is puzzling, and my conclusion is that these are people who have figured out that they can make a living by “hating” on Meghan and so they do it. It isn’t because they have the moral authority to do so, or the relevant experience to offer advice, or that they embody the behaviours that they expect from the Duchess of Sussex. Far from it.

Sarah Vine had the audacity to call Meghan a bad mother because travelled to the US Open over a weekend without her son, who was in the care of his father, Prince Harry and possibly a nanny. Note that Sarah and her husband, while out of town with their young son, left him unsupervised in their hotel room to attend a party that run so late that, the boy was found wandering the corridors of the hotel well after midnight in search of his parents. Sarah should know better than to criticise another parent. Also, these women are not royal, do not have the faintest idea what life as royal is but somehow think they can school Meghan on what a royal should be doing. Their hateful and crass behavior is so far from the “classy behavior” they want Meghan to exhibit, and when it comes to criticisms of her hair, wardrobe and appearance, a cackle is in order. I’ll leave it at that. Gretel Killen, an australian Tv presenter articulated this dynamic perfectly saying, “some people give themselves the illusion of mobility in their own lives by pulling other people back”.

Everything about Meghan Markle, simply put, offends Jan Moir. From the way she hugs people all the way to her guest-editing Vogue. 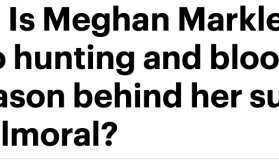 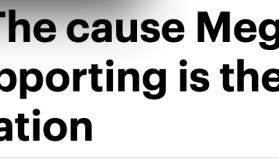 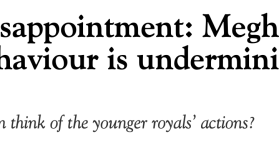 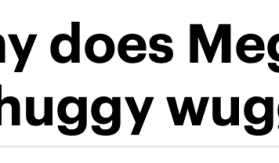 When you look at the articles written by the likes of Jan Moir and Sarah Vine, the argument that the criticism levelled at Meghan Markle has been fair rapidly disintegrates. It might just be me, but the only thing I see are columnists who continually write articles with the sole purpose of criticisingMeghan, for merely existing in what they have for long considered “their spaces”. Their MO is to amplify the negative and these types rarely engage in substantive discussions about the public work done by the Duchess of Sussex. Their line of attack is always personal and repetitive. It’s vitriolic.

“ Why does Meghan have to be so huggy wuggy?”, asks Jan. My question is what level of unhappiness must one feel to be offended by another’s warmth?

The other thing of note is the common language used by the columnists. Piers Morgan in his critique of Meghan’s Vogue issue referred to it as “Me myself” much like Jan Moir. I find it very telling that two critics on the same issue, have the same talking points. They may share concerns but I don’t expect them to use the same words in the same way, for the same paper. In my view, this is evidence that this is not objective criticism but a coordinated line of attack.

Opinion: My Thoughts About The Sussexes’ Decision to Step Back

The Abuse of The Duchess of Sussex Part 4: So What Happens Now? Modernise or Wither Under “Tradition”?