The Simon CASE: Simon Says…Throw Your Brother Under The Bus!

“When Someone betrays you, it is a reflection of their character not yours.”

When it was revealed that Sir Elton John had paid for the flight and paid to offset the carbon footprint, the conversation switched to “debunking the myth” of carbon offsets. Harry and Meghan were declared eco-hypocrites, despite the fact that William, in his efforts to outdo Harry, has spoken of the environment as much as Harry, and had even flown by private jet to Davos climate change forum. His attendance seemed nothing but grandstanding, since all he did was interview Sir David Attenborough. An interview which could have been done remotely, since environmental degradation is such a concern for him. This might sound trivial, but underscores the fundamental unfairness of the media’s attitude towards Harry. There is no shortage of perceived “hypocrisy” if one is determined to find it. But I guess it depends on where said hypocrisy needs to be found.

There was also the fact that William and his family had only just returned from their vacation on an exclusive private island, accessible only by private jet. And if that were not enough, we had the Queen’s favorite son flying hither and yon in private jets, in the midst of renewed outcry about his connection to convicted sexual predator Jeffrey Epstein and Prince Andrew’s alleged sexual abuse of a trafficked minor. No private jet outrage there. Instead, when they were not attempting to equate Prince Andrew’s amoral actions to Harry and Meghan flying by private jet, they were ignoring Prince Andrew in favor of berating Harry and Meghan.

Then, just as it seemed the squall was reduced to a drizzle, along came pictures of the Cambridge clan boarding a commercial flight to Balmoral. £73 flight they declared, with pictures of the Cambridge family cosplaying ‘regular’ folks, with father and children carrying their own bags. It was a double whammy! William and Kate were not only heralded as frugal but of course environmentally conscious for flying commercial. That of course ignores the fact that Meghan and Harry’s personal travel is always privately funded and Sir Elton had paid for their trip; you can’t get more frugal than free. 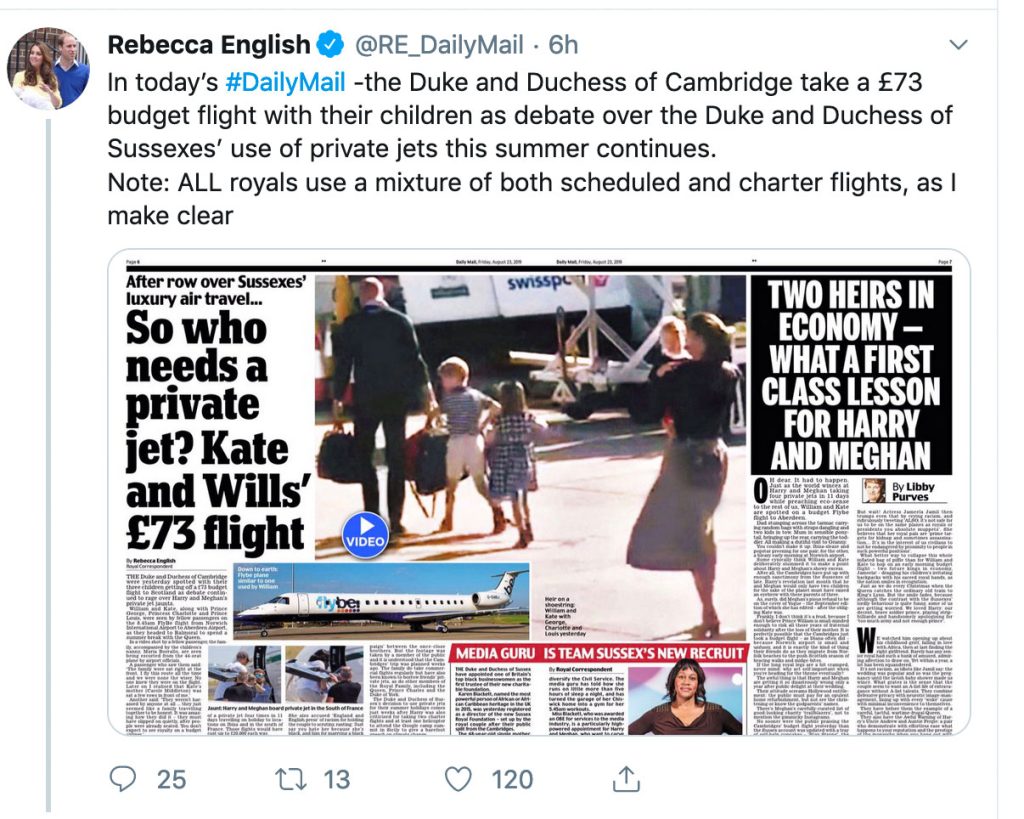 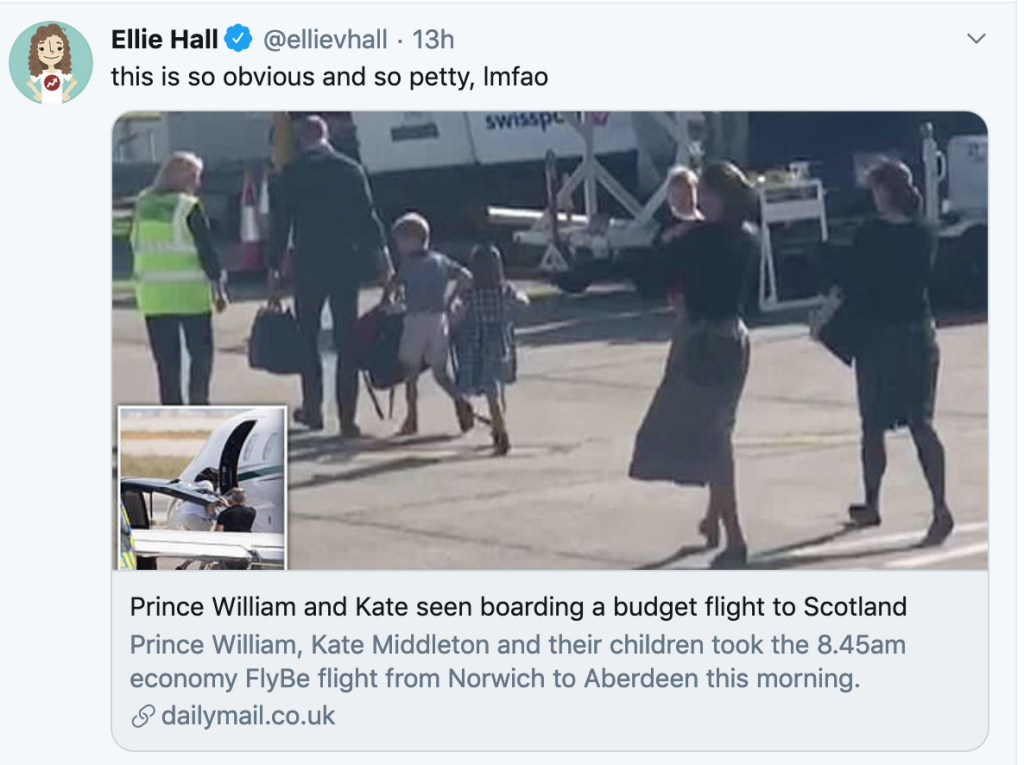 And it was, but wait there’s more. In the fanfare of the tabloids erecting a statue in honor of William the conqueror of duffel bags, came word from a real reporter with the Scotsman – There were two empty jets. The now defunct airline, Flybe had flown two empty planes, 500 hundred miles so they would be sure to have a commercial jet befitting the man waiting for his father and grandmother to pass…on the scepter. If Harry and Meghan’s small private jet was going to destroy the planet, then two empty commercial jets should spell the end of our galaxy. Harry clarified that flying private was for security reasons, which also apply to the rest of the royal family. Remember, this was not long after two men went to prison for plotting to kill Harry, because according to them, he was a “race traitor”, not to talk about the threats to his wife.

Opinion: Are Prince William and his wife behind the relentless and coordinated media attacks against Prince Harry and Meghan, Duchess of Sussex?

Of course, the people who seem to embrace their role as mouthpiece for KP, came out. Fully recovered from directing their fake outrage at Harry and Meghan taking a private jet, they were ready to switch to fake outrage in defense of William and his obvious stunt. 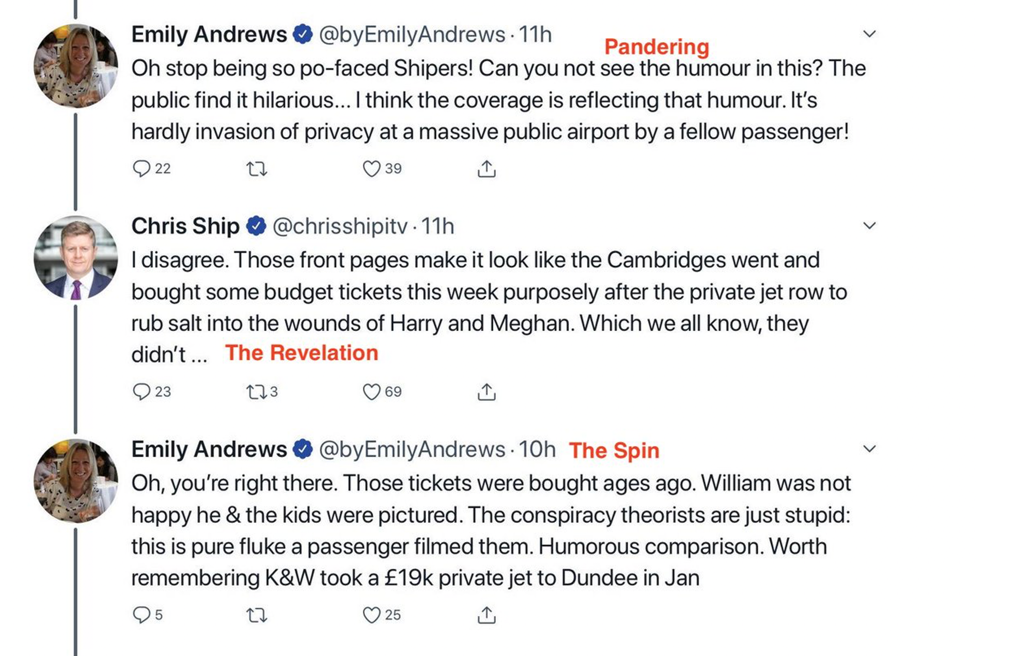 As with the jet stunt, we saw the denials for what they were, “fake”.

And then nearly a year later, this happened. An article about Simon Case of Kensington Palace who is now off to support the non-elected ruler of Britain – Dominic Cummings.

The Spectator’s tweet of the article about his departure proudly proclaimed:
“Boris’s new man in No. 10 was behind Will and Kate’s budget flight to Balmoral – when Harry and Meghan were criticised for flying by private jet says Camilla Tominey” 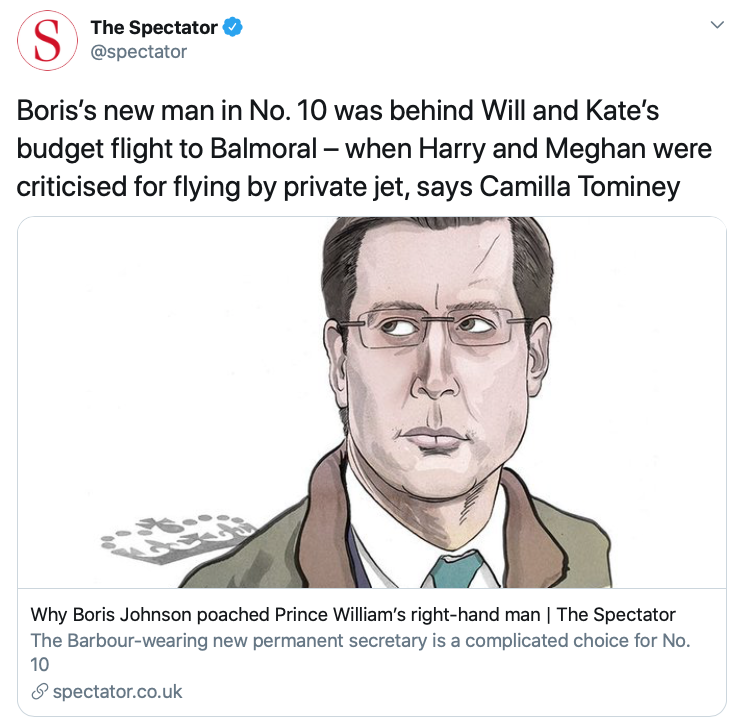 What the tweet should have said was: “It was a stunt.”

And a poorly thought out and executed stunt. By any objective measure, it was a failure. People immediately knew it was a stunt, and treated it with the ridicule it deserved. It did not affect change, except with the people desperate for any excuse to think William and Kate worthy of their privileged position. For those of us who think privilege should be earned not gifted, we saw William as a backstabbing, entitled, duplicitous craven bully. In the middle of a propaganda campaign against his brother and (post-partum) sister-in-law, William decided (or agreed) that it would be an excellent idea to do that, to attempt to embiggen himself.

If, as KP’s press minions originally claimed, the flight had been arranged months in advance, why did Flybe have to scramble( moving empty jets hundreds of miles) at the last minute to position a Flybe-branded plane on a route that was operated by their codeshare partner Loganair (eastern airways) in order to “maximize press coverage for the airline”? Was there a prior expectation that their royal passengers will be pictured on the flight and hence the need to “maximize press coverage”? Had the flights been arranged far in advance as the press mouthpieces insisted it was, the airline could have positioned the planes without costing themselves money by way of 2 EMPTY flights. And why is Camilla Tominey now making special mention of Case’s role in that fiasco? Was he in his role, KP’s reservation specialist? If not normally, why did he take interest in that particular flight?

We do know that the flights arrangements were made on the eve of their departure per the Scotsman. A flight that was obviously positioned to portray William and Kate as “better” and more “responsible” than Harry and Meghan. And why are we now receiving confirmation of what we suspected from the beginning? Is it a coincidence, that revised versions of old rumors (tights-gate, private jet, KP leak) are being trotted out now? Revisions we suspect are closer to, (but still not) the truth. All these revisions still manage to position William and Kate as the victims. Apparently, Kate was justified in claiming to have a temper tantrum because the bride got the final say for her own wedding party; or that the backstabbing of Harry and Meghan via media propaganda was engineered by someone else and William and Kate merely went along? I don’t know why they think either proposition makes them look good.

If Simon Case was the ‘mastermind’ behind the media war waged by the future-future King against his brother and sister-in-law, then Mr. Case is an unfeeling, amoral manipulator. After all it was under his watch that the (pregnant) Duchess of Sussex was subjected to a coordinated campaign of harassment by the British Media. It was under his watch, that Tim Shipman of the times wrote in his famous article, excerpts below.

“This sense of embattlement has been entrenched by William’s decision to reach out to senior figures in the media as he prepares for kingship and by the apparent decision of those same newspapers to side with the palace over Meghan and Harry by peddling the most negative coverage of the duchess’s relationship with her father, Thomas Markle. “Harry sees that as part of the headwinds against him,” a friend said.”

It is Case who was credited with encouraging William to attempt to sideline Harry and his popular wife, which led to rumors of exiling them to Africa.

“…the Duke of Cambridge has been encouraged by his private secretary, Simon Case, who says he believed that a period of separation between the two brothers would help them to define themselves better and also improve relations between them.”

“In some ways it would suit William to get his brother out of the country for a few years and Meghan as far away as possible,” said one friend of the brothers.

Sending the couple to Canada was “mooted, then booted” given that Meghan spent seven years living there and for some it was “too close to the US” and the inevitable tabloid magazine coverage that would ensue. Making Harry governor-general of Australia was discussed and dismissed. The problems were obvious. “The trouble is that you effectively set them up as king and queen of a whole separate country,” according to one source. “And 24-hour media means that Australia is not as far away as it used to be.”

Here we are today, Harry and Meghan have stepped down as working royals, and moved to the United States of America, home to the media capital of the world. The public knew the economy plane trip was a stunt. We knew the leaks were coming from inside the Palace. No one but trolls believed the tights (or is it skirt length?) story. William will be remembered as a twat who on a state visit told the world that the media was hyping up COVID-19, even though at the time, hundreds were dying daily. Yet the apparent architect of the clusterf*ck, Simon Case, is credited with turning William into a statesman(yes) and it was his “success” at KP that lead Britain’s bumbling prime minister to invite him back to No. 10 Downing St.

As it were, the latest Spectator article only seeks to confirm what every rational and logically thinking person suspected was a calculated move by William’s court to hurt is brother. One has to wonder when all these facts became known to Camilla Tominey. Also is she the only reporter who is privy to these facts? Why were some in the royal rota adamant that flight arrangements were made far in advance? Did they question the seeming improbable coincidence(ahem) of the Cambridges and their brood being pictured boarding a domestic flight, whose exact price(£73) they seemed to know even after the fact? Or were they just willing to give William & Kate the benefit of the doubt, which they never extend to Harry and Meghan? So many questions still to be answered. If I were a betting woman, I will bet my last penny that there are more Cases to be unveiled. Stay tuned.

19 comments on “The Simon CASE: Throw Your Brother Under The Bus!”

Exclusive: We published our report on the coordinated hate campaign targeting Harry and Meghan, Duke and Duchess of Sussex. We illustrate the conspiracy, and we believe it is the most comprehensive and damning report on this topic.

You can read it here: https://botsentinel.com/newsroom/reports

Thank you, Prince Harry and Meghan, The Duke and Duchess of Sussex, for providing local Black-owned food trucks for @TheKingCenter’s King Day Community Service Project volunteers today. I’m so grateful for your graciousness in honoring my father. #MLKDay #BelovedCommunity

The real story the #Royalfamily wants to deflect attention from. #PrinceAndrew’s connection to convicted pedophile #Epstein wasn’t casual. He had multiple phone numbers to reach #PrinceAndrew . This is the stuff the head of #ChurchofEngland abides and defends. #Thequeensvalues

The moment @ranvir01 leaves voicemail for Prince Andrew after getting his number from Ghislaine Maxwell’s little black book. Having been through it myself, there are some fascinating entries in it!

From ITV’s “Ghislaine, Prince Andrew and the Paedophile”:

Inside A Made-Up Controversy: Prince Harry And British Vogue Edition

Betty isn't too old to be called because she's don

You remember how quickly a statement came from #bu