In the latter years of the 1980s the British royal family was rocked by a successive number of scandals regarding invasion of privacy. A hacker intercepted phone calls between Princess Diana and James Gilbey and the phone calls were published. Shortly after that, an explicit conversation between Prince Charles and his then mistress Camilla Parker-Bowles was intercepted and transcripts of the salacious conversation were published which were extremely embarrassing for all involved – except of course the tabloids who happily cashed in on the scandal. 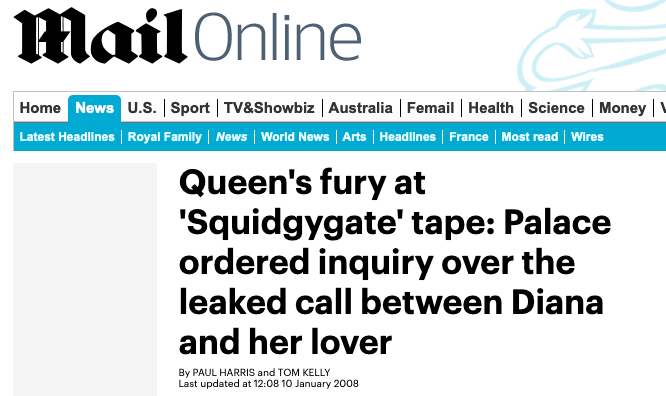 In 1997 the intrusiveness of the press and its pack of hyena hangers on – the paparazzi – collided tragically ending the life of the biggest cash cow and media darling the world had ever seen. Princess Diana had survived Squidgy-Gate. She had survived the humiliation of being forced into a “crowded” marriage and stripped of her royal status, when the marriage ended; only to die with her privacy & dignity still under siege as her life slipped away, under the click and glare of paparazzi cameras.

As I watched the mourning for Diana play out on international television, my heart went out to young Prince Harry – the smallest of the male mourners marching behind Diana’s cortege. 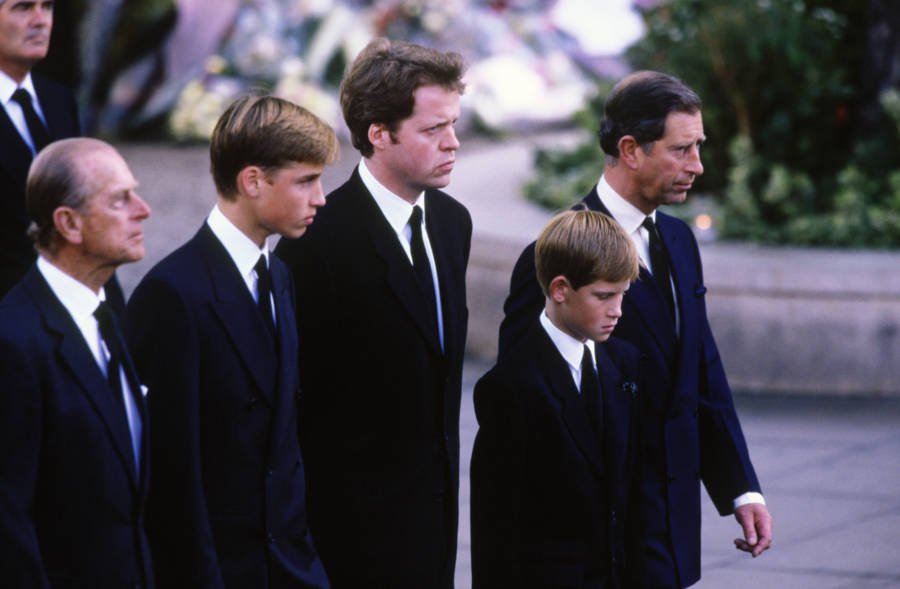 A white bouquet of flowers sat atop her flag draped coffin with the poignant little note “Mummy.” Harry grew from a small stoic child into a man of action, who led troops in combat, on tours of Afghanistan forging a life of service carrying on the legacy of his beloved “Mummy.” 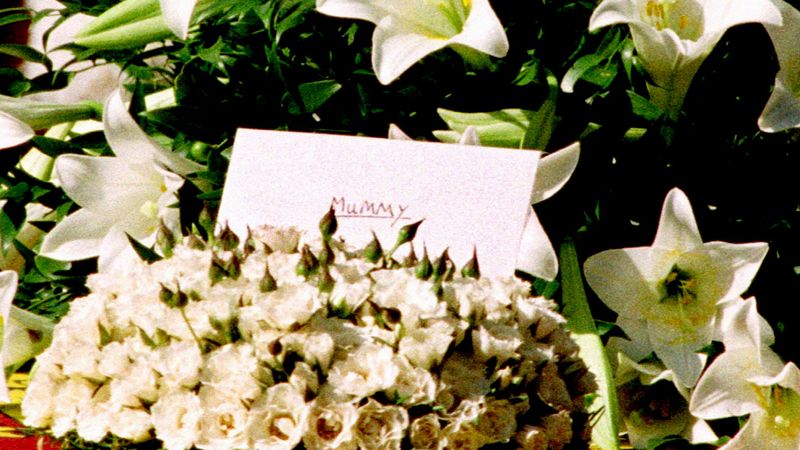 Harry’s personal life mirrored that of his mother as well. He wore his heart on his sleeve which propelled his charitable endeavors. Initiatives like Sentebale and Invictus were birthed from a desire to help hurting children and servicemen heal from the same kinds of emotional wounds Harry had suffered himself.

His recent marriage to Meghan, the Duchess of Sussex was celebrated not only by people in the world who love a good love story, but by media enterprises that saw a way to make a quick buck. If Squidgy-Gate and Camilla-Gate could make good marketable copy, think what could be made by whipping up the public with outlandish stories about the new Princess who is a woman of color. This determination to cash in has whipped up so much hate in certain sectors that Harry has had a hit put on his very life for being a “race traitor.” 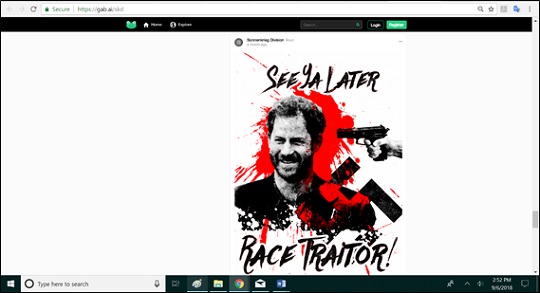 Squidgy-Gate and Camilla-Gate can’t compare to a former game show hostess that could be sold as “straight outta Compton.” Meghan is a scandal sheets dream. Harry’s new wife generates income from bigots who swarm into comment sections and from fans who swoop in to her defense. Harry’s ominous sense of deja vú and guilt that he couldn’t protect his mother, has spurred him to action and he released an unprecedented letter which seems in hind sight to have triggered spiteful pushback.

But the past week has seen a line crossed. His girlfriend, Meghan Markle, has been subject to a wave of abuse and harassment. Some of this has been very public – the smear on the front page of a national newspaper; the racial undertones of comment pieces; and the outright sexism and racism of social media trolls and web article comments. Some of it has been hidden from the public – the nightly legal battles to keep defamatory stories out of papers; her mother having to struggle past photographers in order to get to her front door; the attempts of reporters and photographers to gain illegal entry to her home and the calls to police that followed; the substantial bribes offered by papers to her ex-boyfriend; the bombardment of nearly every friend, co-worker, and loved one in her life.

Prince Harry is worried about Ms. Markle’s safety and is deeply disappointed that he has not been able to protect her. It is not right that a few months into a relationship with him that Ms. Markle should be subjected to such a storm. He knows commentators will say this is ‘the price she has to pay’ and that ‘this is all part of the game’. He strongly disagrees. This is not a game – it is her life and his. A Statement by the Communications Secretary to Prince Harry

Not only has the media continued to intrude on Meghan’s privacy, but adding insult to injury, the most vindictive dysfunctional hateful family known to man have been enlisted in the business of cashing in on bashing Meghan Markle. Her disgruntled and jealous relatives have been paraded on every media outlet in Europe and on every platform available selling slander for cash. Even the social media tweets of a deranged sibling have been harvested for headlines.

Squidgy-Gate on steroids is what we now have in 2019.

What is a man supposed to do who has seen his family torn apart? Let’s be frank it wasn’t just Diana, but it was Charles and Camilla too (no sides taken) – all parties were eviscerated by the press invading their privacy and selling ringside seats to their personal life. In light of all this, Harry and Meghan decided that their child would be given as normal a life as possible and raised without a royal title.

Heck they didn’t even give their child a courtesy title. They want to raise Archie a private citizen. So, Archie’s birth was private – no Lindo wing pap walk. Archie’s christening was private – no pap walk on the way to the church. The Sussexes moved away from Kensington Palace – no leaks.

Guess what royal reporters have done now! We don’t have hacking into phones like what happened with Squidgy-Gate and Camilla-Gate. Now, the intrusiveness has morphed into Twitter-Gate! Yes ladies and gentlemen, we now have reporters who instead of eavesdropping on phone calls – they lurk and troll Twitter accounts and steal thread contents to use as content for stories good and bad about the Duke and Duchess of Sussex. 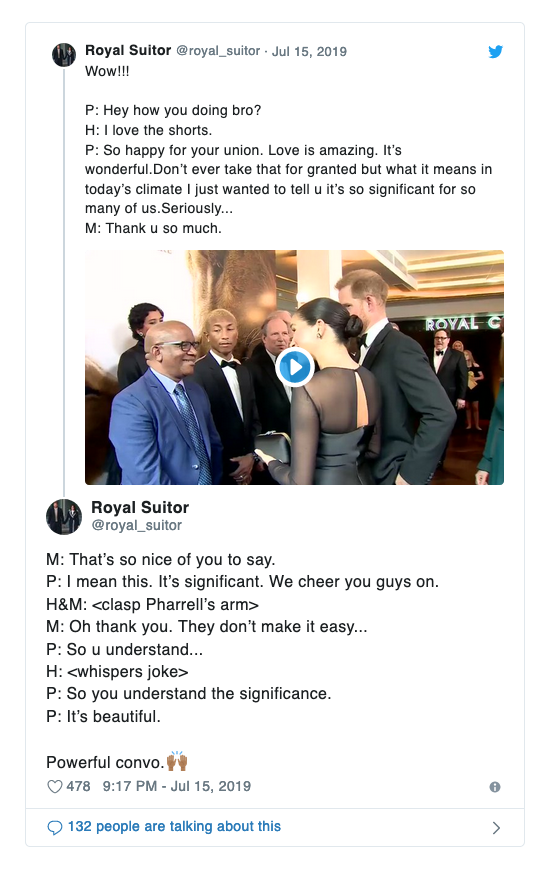 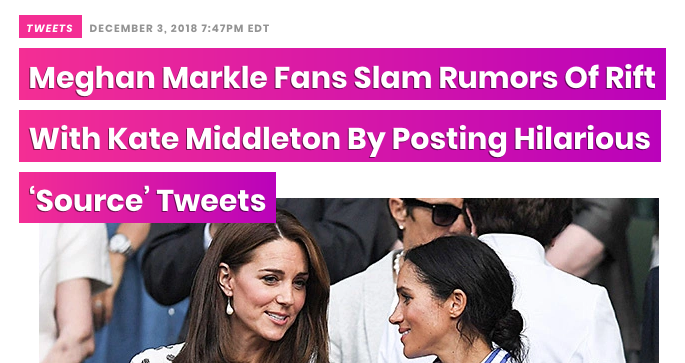 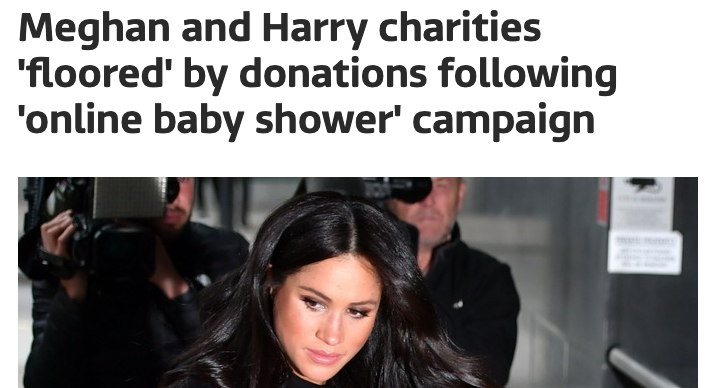 A Twitter initiative called the Global Sussex Baby Shower was seized upon and reported on both sides of the pond. A Twitter phenomenon called #mypalacesource which spoofed gossipy royal reporter non-stories was used as tabloid fodder as well. A twitter account attempted to transcribe recent encounters between the Duchess of Sussex at the Lion King premiere. This post was promptly seized to make a stupid non-news article about who said what to whom. Is this the new normal for journalism in the 21st century?

I call it Twitter-Gate not because this story is as scandalous as the stories referenced earlier but to point out the scandalous evidence of abject laziness and lack of originality in the UK press. This kind of plagiarism is not only cheating – it is sad and shocking.