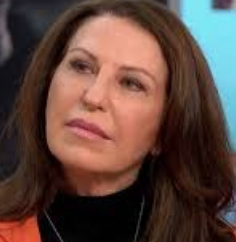 What is the obsession with Amanda wanting Meghan to learn from Kate? We noted the Illusory Effect of Truth and in this case we are seeing columnist after columnist attempt to other the Duchess of Sussex for simply not being like Kate. In other words, in Amanda’s world, since Meghan doesn’t look ,act and dress like Kate, then she is not good enough and does not miss an opportunity to make it known. If this sounds crazy, it’s because it is. 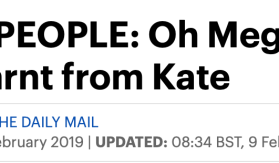 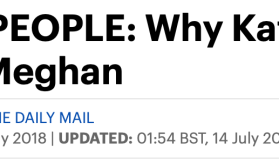 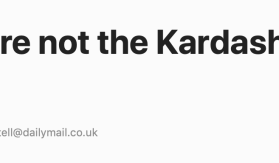 This treatment of Meghan by the likes of Amanda is a reminder of how consistently women of colour are required to dim their light to make others feel comfortable. Within workspaces, they are asked to dampen aspects of their personality to feel like they could fit into the culture. There is an expectation within these spaces that for a WOC to fit in she must change the way she talks, the way she dresses and her hair to be more acceptable. To these people Meghan must be like Kate or she should do as they say for her to be accepted. This is not what objective and fair critics do, this is the behaviour of a bully and these are women are bullies. 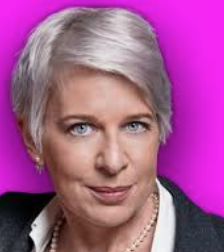 Even racists think that Katie Hopkins is racist. According to her Wikipedia page, journalists, advocacy groups and politicians have accused her of racism for her comments about migrants. In 2016, Mail Online was forced to pay £150,000 to a Muslim family whom she had falsely accused of extremist links. Hopkins has developed a reputation for disputes with public figures on Twitter. In the 2017 libel case, Monroe v Hopkins, Hopkins was required to pay £24,000 in damages and £107,000 in legal costs to Jack Monroe after making defamatory remarks on Twitter. Her role at LBC was terminated in May 2017 following her comments on Twitter about the Manchester Arena bombing. The media has frequently described Hopkins as a far-right political commentator. 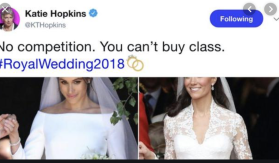 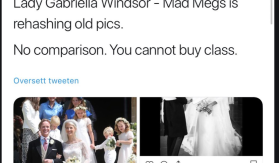 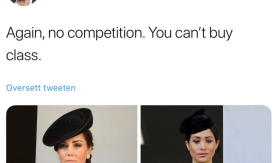 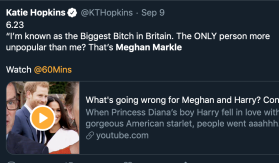 So it should come as no surprise that she does not like the Duchess of Sussex. She epitomises the typical Meghan Markle hater, the one that you will find in the darkest corners of the Internet saying the vilest things about the Duchess. But she is not on the fringe of media platforms she is on social media and mainstream media who have allowed her a platform to push forward her hate driven rhetoric without challenge and with no element of accountability.

Media outlets, by giving people like Kate an unchallenged platform legitimise hate. This is a big problem that is best summarised by Stop Funding Hate an organisation that is working at making hate unprofitable by persuading advertisers to pull their support from publications that spread hate and division.

He is a former royal reporter for the Sun who has been writing about the Royal family for the past 26 years and one of those who has made a move to cash in on Meghan Markle by writing a book. His book has managed only a 2 star rating.

At this point we have established the usual narrative that these Royal experts continually push so let us focus on Phil’s most recent “work” in which he stated that “Meghan Markle Has To Thank Kate Middleton For Charity Fashion Launch Success”. There is a mantra that black parents drill into their children, which is “You’ve got to work twice as hard to get half as far as your white counterparts”. And even still your success will be credited to a white woman. Quite apart from this blatant move to credit Meghan’s success to Kate, Dampier is just very dismissive of the Duchess in a way that makes it hard to obvious that there can be no expectation of fairness or objectivity from him. Case in point, following the release of the promotional clip of the Duchess’s chat with Tom Bradby for their documentary, Dampeir adopted a very cavalier, almost trivializing stance when commenting on the preview. As you will see in the screen grab below, he was rightly called to order by a blue check on Twitter. 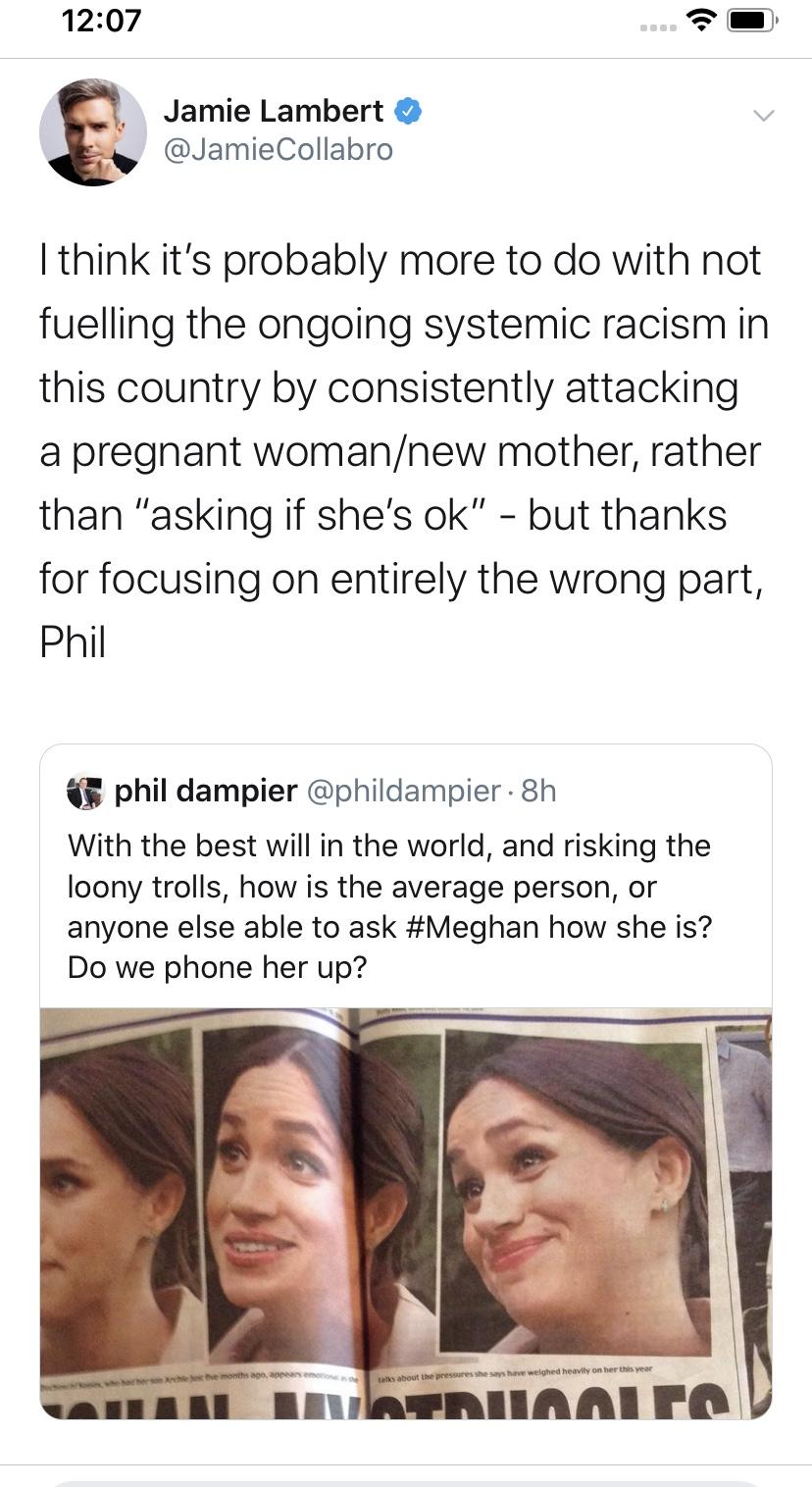 Of course Dampier understood the import of Duchess Meghan’s statement , but chose to trivialize it. That to me is emblematic of the disdain they have for her. Its dehumanizing because it says, you’re not worthy enough for me to take your pain/ distress seriously. That strangely but not surprisingly mirrors the reaction of hateful internet troll whose response was to throw out callous statements. If such a person wants to offer you a thought about the Duchess, you will do well to avoid it like the plague because it is guaranteed to be a toxic, biased and unfair representation.

There are many people that can be added to this list and it could go on and on. When it is said that there has been a relentless and malicious campaign against the Duchess of Sussex, this is in fact true. The reasons for this are varied. For some it maybe ignorance as the UK is not forthright in discussing issues pertaining to race and for a country in which 13% of the people belong to Black, Asian, Mixed or Other Ethnic groups, there is no diversity in the coverage. The other reason is a good number of these people are indeed racist although they try to argue otherwise. The simple fact is that, Meghan has done and behaved in the same way that all other members of the Royal family have but she is singled out for unduly harsh criticism. Until there is a sensible explanation that does not involve name calling, the only logical conclusion is because she is not white.

The relevance and longevity of a royal institution depends on the tolerance of the people for said institution. As such, popularity is a major concern, and you can see why some people within the palace are bothered by the amount of public support the Duchess of Sussex has, in spite of all the negativity that has been thrown at her. They don’t like what they see and since they cannot control her, they will try and control how others see her, in the hope that she will lose favour with the public.

Perhaps the most important reason is that the British press is problematic. We have seen how reckless and biased reporting around Brexit has triggered hate for immigrants, Muslims and other minority groups living in the UK. We have read what happened with Gareth Thomas and Ben Stokes forcing them to publicly call out specific UK tabloids. Just recently we saw how Coleen Rooney was allegedly betrayed by Rebekah Vardy, who she considered a friend, by selling stories to the Sun thanks to their long-standing practice of unethical news sourcing.
Recommendations of the Leveson inquiry into the phone hacking scandal have not been implemented to date and the second part of the inquiry was cancelled and the UK media has fallen back to into its old patterns. This is a game that the media has played with the people of the UK rich or poor, royalty or not and it is a game that Harry and Meghan have refused to play for which Meghan has been targeted. A campaign in which they printed lie after lie to defame her character, exploited people around them and are willing to even break the law to source their stories.

The press has abused its freedom because the smear campaign does not exist in a vacuum or self-propagate; its is people who have sourced, written and reported on these stories. So the next time you come across a story about the Duchess of Sussex and her husband take a moment to look for the facts, set them in context, isolate them from the personal opinions and media constructed narratives; in short test them for truthfulness, accuracy, objectivity, impartiality, fairness and public accountability to determine whether or not they are newsworthy. Because as the legal battle is fought, we will never win the war for a free and fair press until we stop enabling the press. It is our responsibility to stop the spread of lies, propaganda and hate by becoming responsible consumers of the news.

About That Specific Press Pack – The Photographers – Part 6

SMOKE AND MIRRORS 3: Royalists, the royals they support and the people who cover them