Congratulations Meghan on another triumph. I’m certain that her motivation isn’t to stick one more accomplishment under the mediocrity horde that can’t wait to see her fail. That would be allowing those wretches rent-free space in her soul.

As Meghan said in her statement, The Bench started as a poem that she wrote to Harry on Father’s Day after Archie’s birth. So, add poet to the mix. She wants to celebrate and highlight the special bonds of fathers and sons.

Before the detractors yammer on about her relationship with her father, you sound daft pushing an agenda of her reuniting with a person who has continually betrayed her trust. It’s like taking an abused person to task for not embracing the abuser. It’s her life and her prerogative to decide who should be a part of her family.

So, Meghan’s star power, her literary panache, her strength as a communicator has afforded her a platform not only in an industry that is still heavily underrepresented by people of color but in a category of fiction where the diversity statistics of children books written for and about people of color can’t be lauded, yet.

None of those facts about the history of publishing, the uneven playing field, or high barriers to entry for anyone of color matters to the sorority of angry white female authors. These folks got triggered when their usual racist and prejudicial heartstrings got plucked by a woman of color.
Show me their comments raging about another white woman getting a publishing contract, another white woman’s writing abilities, or credentials to write said book, if you feel inclined to defend their racist rot.

The triggering of the caucasity (slang for the audacity of white people to do things they feel safe doing around their whiteness) horde included the usual suspects, though. It was like the dinner bell had sounded and the waft of cheese enticed the rats to emerge from their holes, licking their chops to rant about the book, Meghan, Meghan and the book.

First, the psychopathic stalker disguised as a second-rate fired journalist can’t help blathering on about his obsession. Imagine him and his wife over a romantic dinner. She’s chatting about the memories of their honeymoon and wedding anniversaries. Meanwhile, his multitude of thought bubbles are about what is Meghan doing now? How can I get Meghan to answer me? Meghan, why didn’t you invite me. So, wife of the pseudo-journalistic stalker, blink if you need someone to call 911/ 999 on his creepy a$$. Or maybe, wifey’s secret kink is… you guessed it, MeGhAn!

Then, there were the royal gossip twits who get paid to have brain farts about the royals. This self-indulgent lot popped up online, happy to have something to do because the boring lot of them don’t garner much attention outside of the U.K. And don’t try to tell me about U.S. magazines covering the royals, they will also publish nonsense about space aliens. Doesn’t mean we give two craps about that either. But the Royal Rota enjoys trying to take down Meghan with shady duplicitous nonsense and anonymous sources intel. Notice, the word try. At this point, they are so unoriginal and tedious that it’s like watching grass grow in the desert.

Then you have the monarchists who regularly come to the social media table with their lack of self-awareness that their empire will be a country-of-one in this century (praying for sooner), including the coon brigade, to dribble on about Meghan and the book. What a bloody boring lot. It’s best to leave them in the kiddie pool away from the grownups.

But the winners of the public relations stupidity belong to a special batch of white women—white women authors, the dumb a$$es, who leveraged their mediocre writing careers to attack a woman of color for her audacity to enter the publishing industry. Obviously, they missed the memo when author Emily Giffin got slapped silly on social media to the point that she had to cut off comments and perform the apology tour for her asinine opinions. 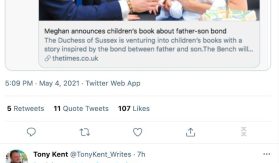 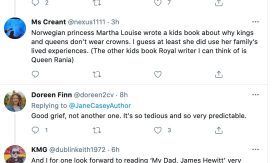 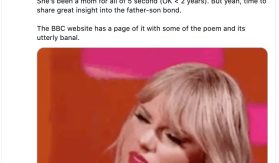 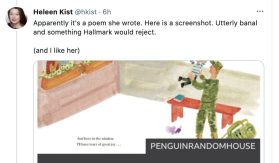 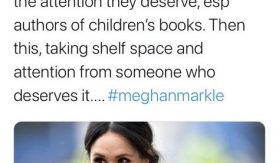 Don’t dish it out if you can’t handle the hellfire that will come your way. They have learned that lesson well. What’s utterly comical is how these women charge out the gate with their snarky, uninformed hot takes, only to scurry away, tails tucked neatly between their hind legs, hiding behind newly private accounts, disappearing tweets as if they were Houdini. Too shy now Karen? All I’m saying is that I wish these women, when they decide to show their racist/bigoted selves, will have the freaking guts to take the heat. Have a backbone to match the size of your mouth.

These women don’t deserve sympathy, empathy, or a friendly ear. They are so caught up in their white women’s privilege that it never occurred to them that having a book about to be released and showing their a$$ isn’t a good combination. Stupidity of the highest order.

But to then take the position as gatekeepers, deciding who can participate in the industry is pretty rich when they, collectively as a race, have been given the big assist from the publishing industry who historically kept POC participation at token levels.

These grown women relied on that inner mean girl vibe to troll. They automatically went into bully mode because their inferiority complex and talent insecurities got the better of common sense. And as a result, they showed their readers, some of whom may be fans of Meghan or simply supporters of POC’s rights to exist and thrive wherever they want to be, that they see the world one way and one way only. By the end of the day, comments were deleted, fake apologies issued, rinse and repeat for caucasity in action.

The “I’m listening and learning” verbiage tired and old. How about they actually learn? Like inform themselves first? That should be a given as authors. Like my mother taught me, look before you leap.

Already, The Bench is a best-seller, sold out in pre-orders on several sellers, and at the top of the children’s books list. Silly rabbits, you can’t tear down what is divinely protected.

Major shout out to Christian Robinson, a black illustrator, who worked with The Sesame Street Workshop and Pixar Animation Studios. Let’s also keep him uplifted for this major accomplishment. The Squad will always honor Meghan and her accomplishments. The global allies who recognize the aged empire’s double standards against Meghan will also celebrate this book.

The Bench will accomplish what Meghan intended for her audience. The End.

20 comments on “Meghan, Author and Duchess of Sussex, Has White Female Authors in a Tizzy”

SMOKE AND MIRRORS 2: Royalists, the royals they support and the people who cover them