Like many royal reporters, he does not rely on facts for much of his reporting unless it has to do with a palace confirmed report.

In the autumn of 2018 he claimed to have been given unfettered access to Prince Charles for over a year to write his book Charles at Seventy – Thoughts, Hopes and Dreams. Even though it managed a 3.6-star rating on Amazon, the reviews call into question the level of access since he provided no new insights. e.g.

Often times he appears on Australian TV where he spouts lies and uses his own personal opinion to provide what I can only term as “alternative facts”. For example, during the engagement interview Meghan when asked about her knowledge of Harry to prior to their meeting said she “did not know MUCH about him”, not that she did not know who he was. Robert is one of the people who then went on to claim that she was lying saying that he did not believe her. The evidence he then submits to back up his claim is that she visited Buckingham palace as a teenager, as a tourist. Other lies that he has perpetuated was that Meghan had no friends and that she threw a tantrum over a tiara. Reports like this are lapped up by social media trolls as evidence to call Meghan a liar.

Robert Jobson represents one of the worst traits in Royal reporting which is, it is not enough to make money by spewing lies about you, but one must go on to use your name to make money off of you. Jobo as he is commonly known by his colleagues, was one of the fiercest critics of the Sussexes when they elected a private birth. The reason for his strong reservation for the couple’s decision became clear when publicity for his planned royal baby book begun. It was apparent that, not having easy access to pictures as a Lindo Wing and street parade will have allowed, directly affected the appeal of his book. Determined to personally monetize baby Archie’s birth, he brokered a deal companies dealing in baby merchandise, partnering with them to put out a book about the Royal Baby. When the book was launched, it was promoted as edited by the Duke and Duchess of Sussex, of whom the author was a “close confidant”. And it didn’t stop there because he was pictured in promotional photos receiving a Koala baby hammock on behalf of the couple and their son, which ostensibly was destined for baby Archie’s nursery. It was not until fans took one of these brands namely AmazonasUK to task that the company changed the caption on their post but that did not stop them from peddling the book to the unsuspecting public. See screen grabs of social media posts below for details. 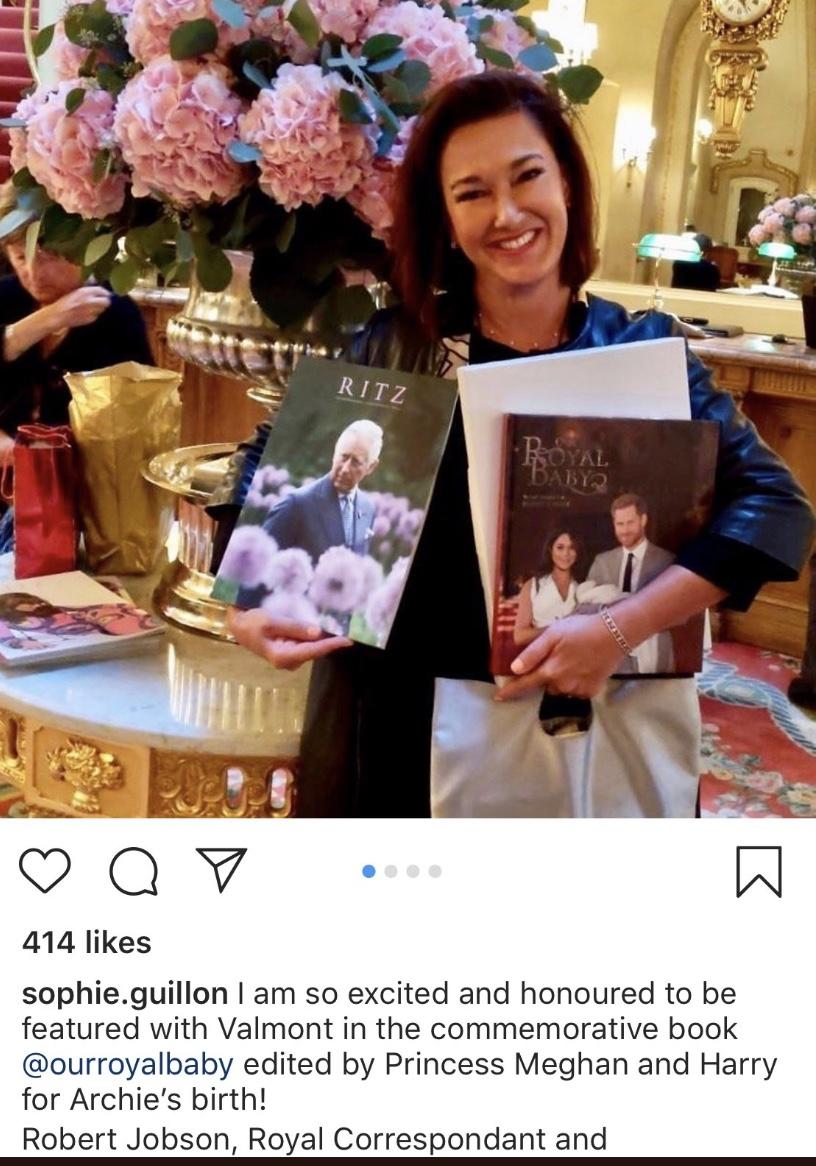 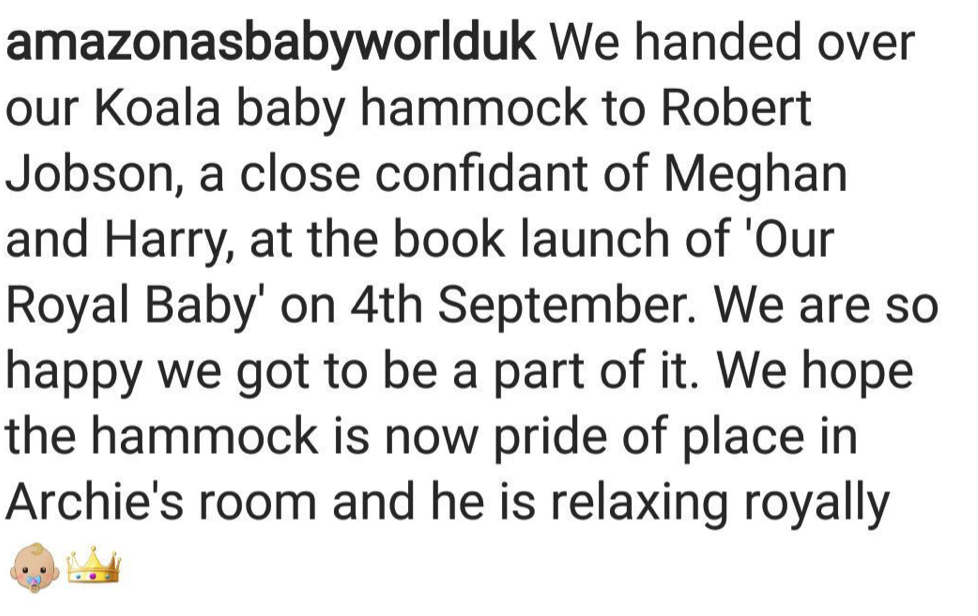 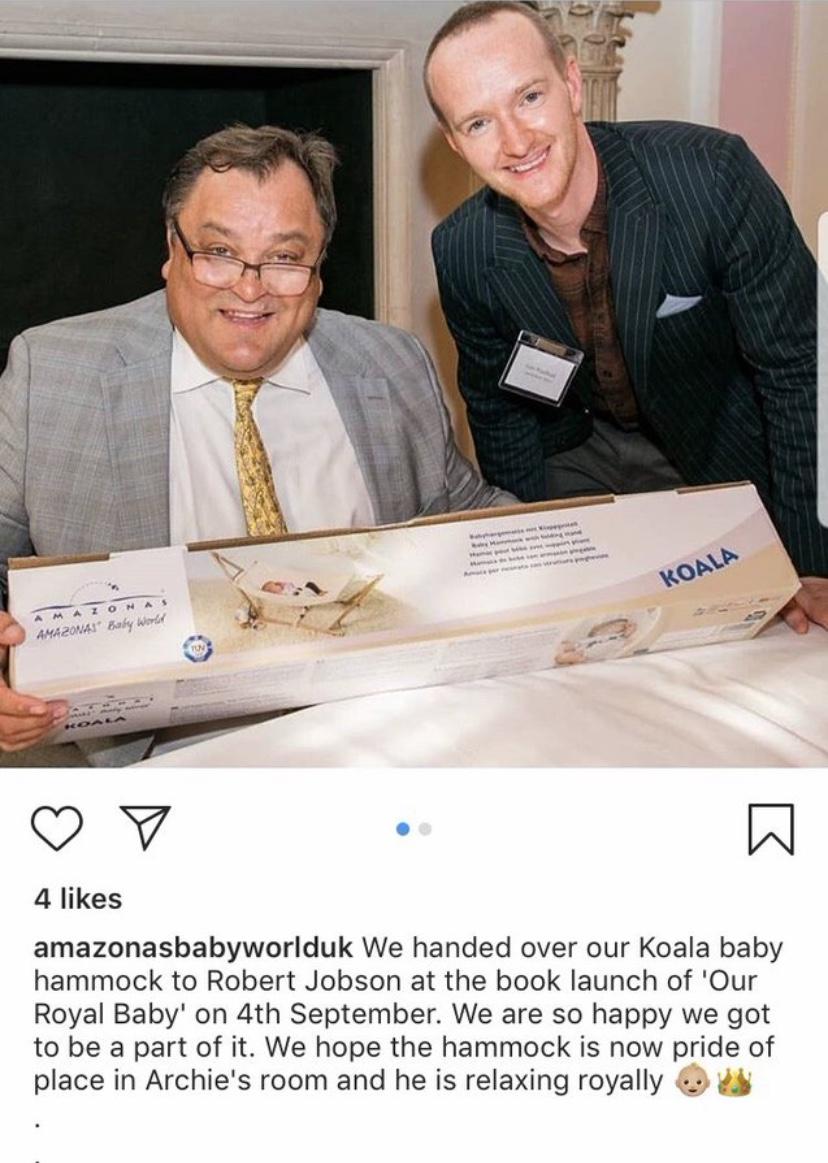 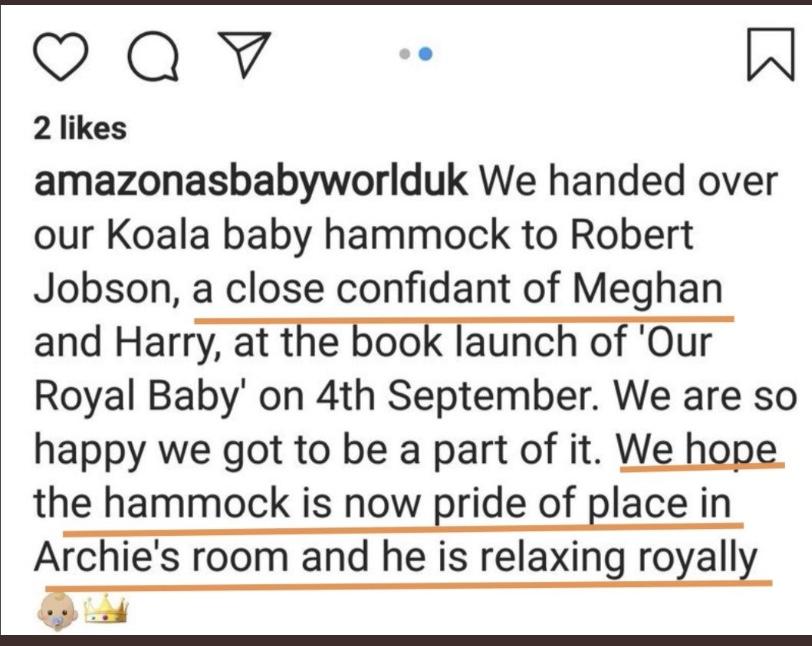 The long and short of it all is that people like Robert Jobson use their proximity to the Royal Family to peddle all kinds of lies and go on to spin these lies in TV exclusives, documentaries, books and any other kind of merchandising vehicle you can think of. Why the Royal family does not challenge this we will never truly know but it should explain the anger that large sections of the British press have expressed in light of the lawsuits that the Duke and Duchess of Sussex have filed against some of them. Another unfortunate incident this week with Jobbo is he was caught retweeting online abuse directed at the duchess of Sussex by a member of the racist online hate group. 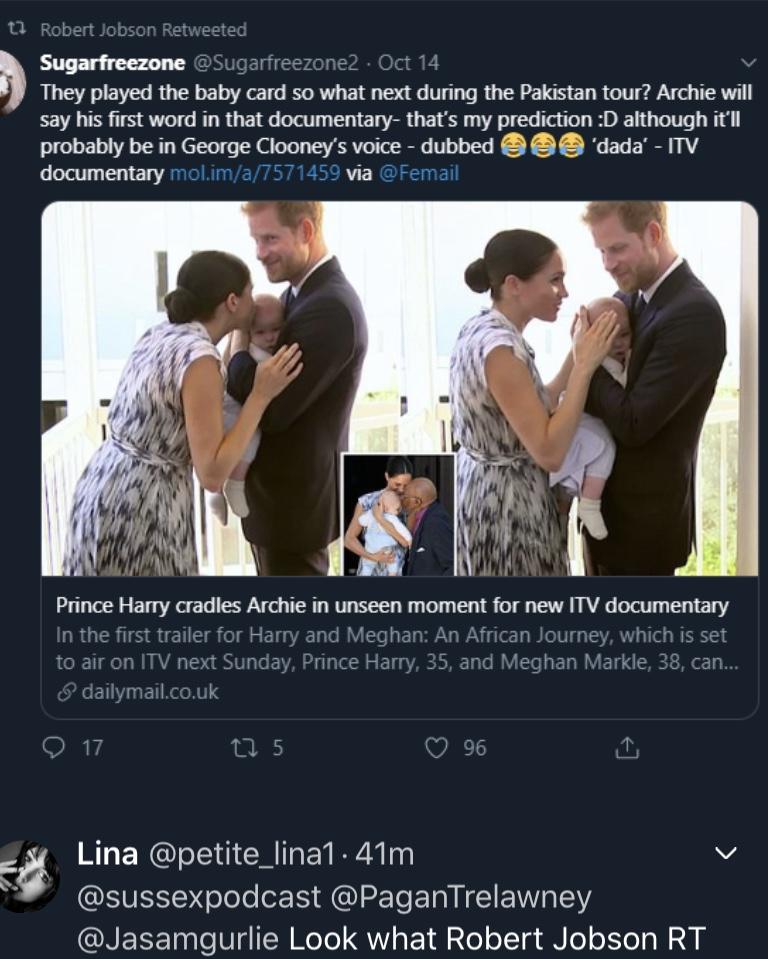 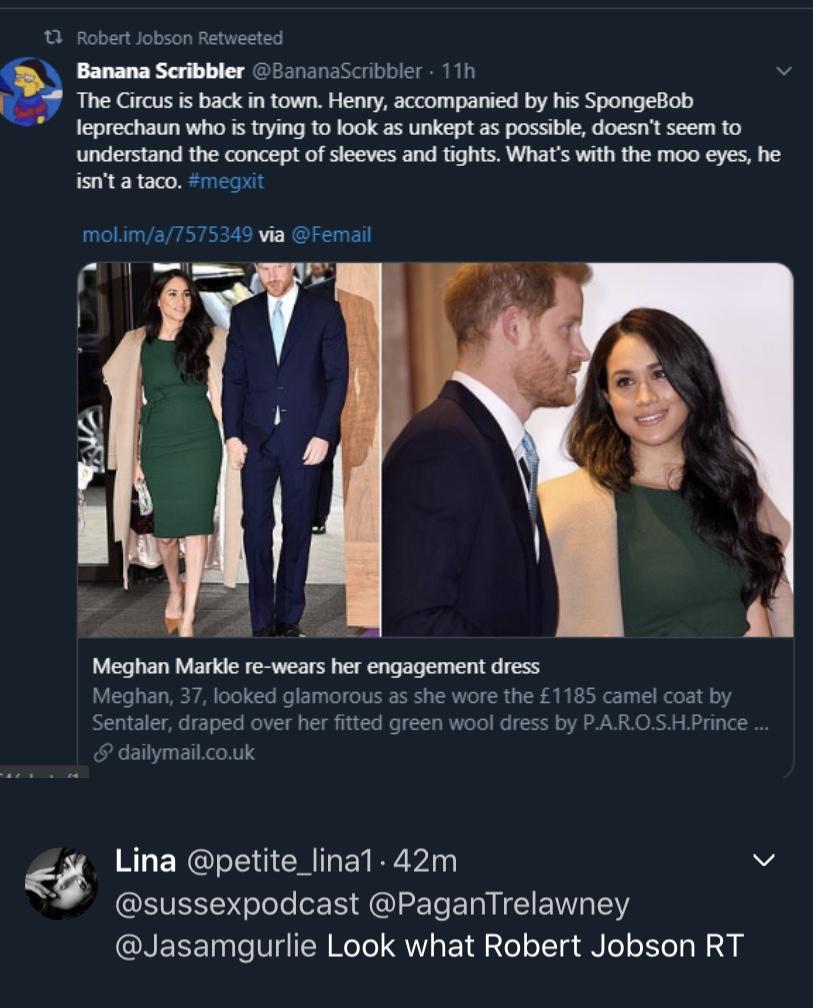 When confronted, he had a series of varying explanations from “having no recollection” to “being hacked” all while his employer the evening Standard’s response was an “inadvertent retweet”. So basically all over the map. Can anyone have a reasonable expectation of impartiality from this reporter? It’s highly doubtful. 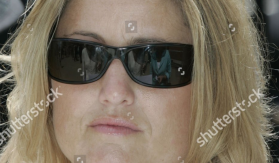 One has to wonder why a royal reporter worth their salt would go to great lengths to hide who they are as you can see from the only picture we could find of her. That is probably because she works for the Daily Mail, a paper that is known for its divisive and hateful rhetoric. She probably has better reasons.
We cannot talk about Rebecca without talking about her epic fail headline when she declared (with a photoshopped image) details of Meghan’s wedding dress. 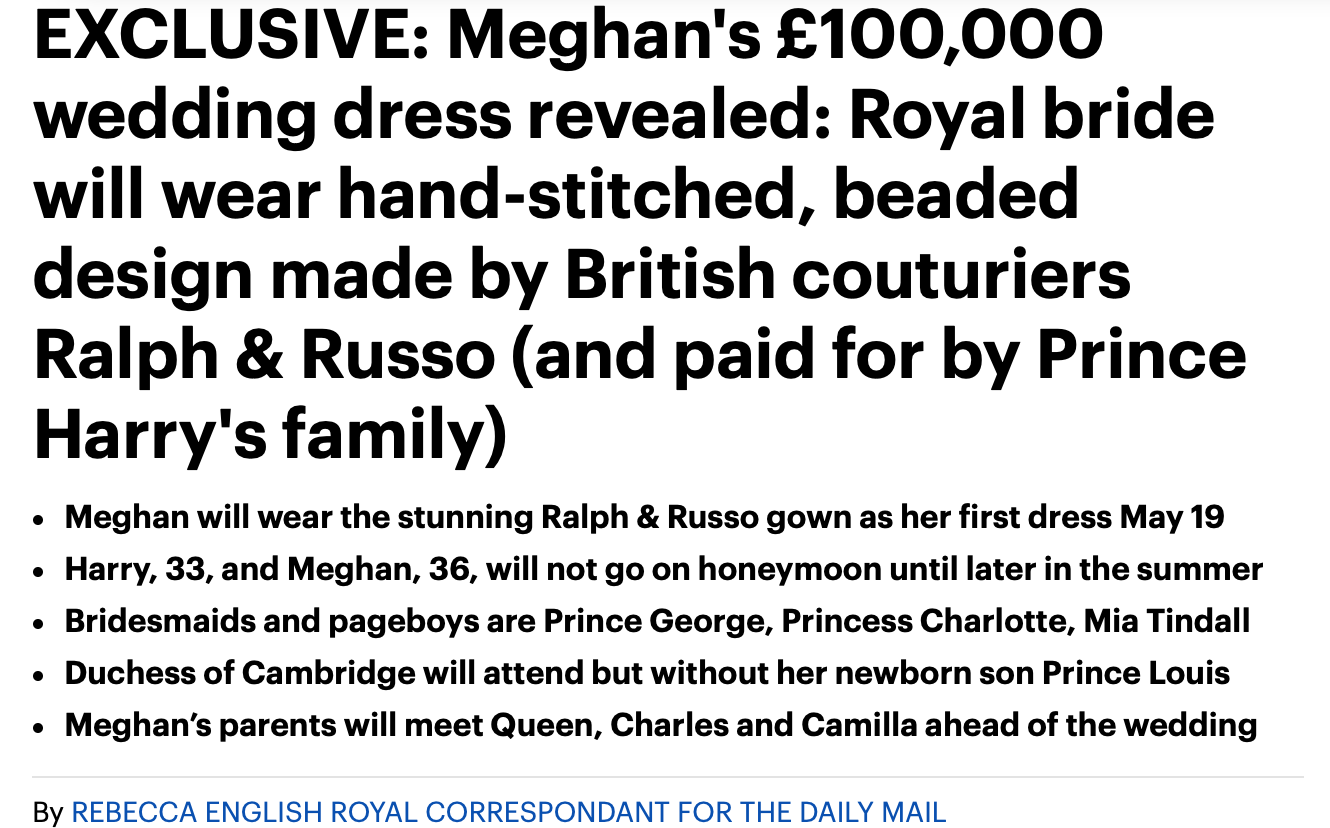 If there was a day when readers should have stopped believing anything written by a Royal reporter that did not come with an official press statement it was May 19, 2018 when Meghan showed up in a Givenchy gown with not a bead in sight.

But this is how the tabloids and in particular the Daily Mail operate. All they have to do is get one fact right, speculate on the obvious and then make the rest up as you go. In this instance, by the time this report was written it had been announced that Meghan’s parents would meet key members of the Royal Family and there had been speculation that George and Charlotte would feature in the wedding. The rest of the story was at the very best conjecture which turned out to be nothing but a lie.

Now that we have a background on Rebecca and how she operates let us look more closely at her coverage of the Duchess of Sussex. She is the one who wrote one of the most stinging articles aimed at “othering” her in which she called her an interloper and an angry black woman. Talk about racial stereotypes. The article speaks for itself and highlights the level of disdain and hostility she faces both within the palace and in the press.

As a reporter covering the royal beat, you can’t help but note the bias she exhibits in covering the two royal couples. Rebecca has the all-important role of promoting the House of Cambridge , one that she does at the expense of Meghan Markle as you can see from this article. In her writing for any praise favoured upon the Duchess Cambridge she must show her readers why Meghan is the problematic one.

Royal reporters have often said that the palace avoids scheduling high profile events or press statements in an effort not to undermine each other, but with Rebecca we have seen on at least two occasions where she has gone out of her way to try and take attention away from the Duchess of Sussex.

It was the day before the Duchess of Sussex launched her first solo project in september of 2018, Together,our Community Cookbook that Rebecca ran a story announcing a secret project that Kate was working on and which was scheduled to be launched at the beginning of 2019. Similarly, almost a year later on the day that Meghan launched her Smart Set collaboration with 3 of the UKs top high-street brands, Rebecca was at it again. This time, it was another secret project that Kate was working on with the Director of Love Actually. 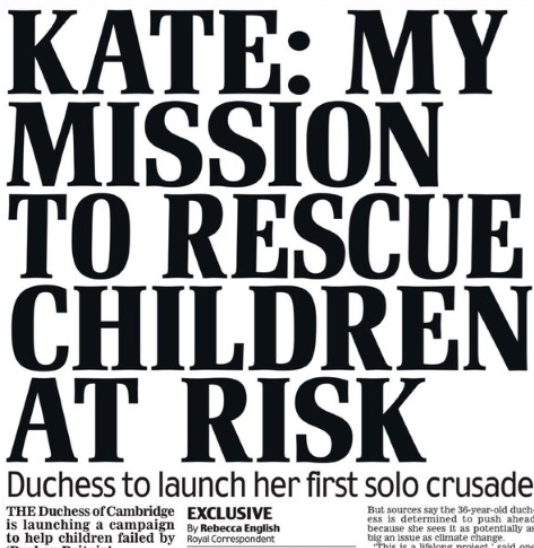 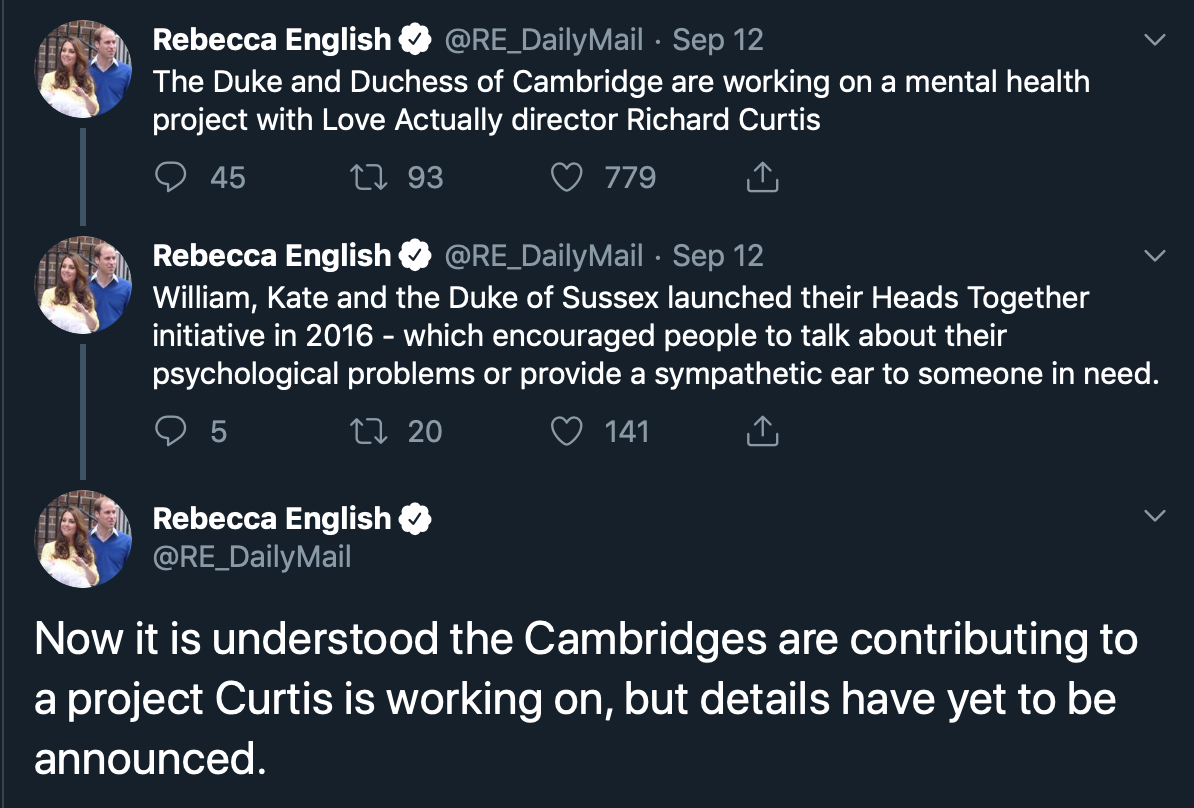 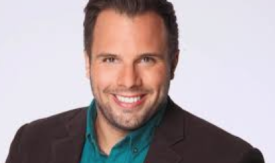 Dan is an executive editor at The Sun and appears regularly on the Lorraine TV to talk about celebrity and royal things. Most recently, Dan got caught in his lies when he went on TV to critique the Vogue September 2019 issue guest edited by the Duchess of Sussex, proclaiming “Royals don’t guest edit magazines! Celebrities guest edit magazines”. If you did not know yet, this was a lie like no other because Prince Charles has guest edited Country Life Magazine twice. The irony is people like Dan constantly try (but fail) to separate Royalty from celebrity so why is a celebrity gossiper going on TV to discuss the Royals ?I digress. So back to Dan and the assertion that Royals don’t guest edit magazine, he came under a lot of fire for this misrepresentation as did the rest of the British press for their coverage of the Vogue issue that, by the end of the week the press were backed in a corner and in his defence and probably that of his colleagues he told the world that the negative coverage Meghan was facing was being sanctioned from within the palace walls.

But perhaps what is bothersome about Dan Wootton is that he has attempted to create a narrative that Meghan Markle (prior to meeting Harry) was going around direct messaging people asking them to hook her up with an English boyfriend. He claimed “Meghan Markle swapped messages with X-factor winner Matt Cardle and asked to meet him” and that she “was messaging the Wanted hunk Max George”. Both Matt and Max denied the claims but there was no correction from Dan or the Sun with Dan claiming that he stands by his story. Dan has been accused of bullying celebrities like Kerry Kantona with an online petition to the Sun to have him sacked gathering 6,313 signatures. In December 2017 following relentless coverage by Dan, Alexandra Burke wrote on her twitter page:

“Dan, every-time we have met you’ve been lovely. I’m finding it very hard to read all the lies that you have published about me. I’ve tried my best to just be strong and brush it all off by mentally it’s taking its toll. It hurts so much to read yet another fake story when all I wanted to do is enjoy this journey on strictly. Please spread love… life is just short for all of this. With love, Alexandra”.

It is never in the public interest to spread lies about anyone regardless of who you are. Prince Harry’s statement mentioned how he has been a silent witness to Meghan’s private suffering and people like Dan Wootton perpetuate this suffering with no form of accountability.