PART 2: The TV Pundits and The PR Problem

These are the ones who bring the stories up for debate. 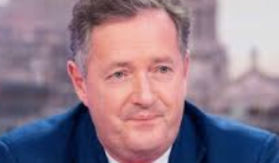 After being sacked from the Daily Mirror for publishing faked photos of British Soldiers torturing Iraqis, Piers tried his hand at CNN taking over from Larry King, where he was also fired. These days he has a column in the Daily Mail and hosts Good morning Britain on ITV three times a week. Piers uses his platforms (GMB, Twitter, Daily Mail) to bully the Duchess of Sussex. The word bully which means “to seek to intimidate or coerce someone” and quite frankly that is what he does.

It is important to understand the context in which this occurs and to do this we have to go back to when Prince Harry and Meghan Markle’s engagement was announced. Piers was full of praise for Meghan and even wondered on Twitter if he would receive an invite to the wedding. When Meghan’s father pulled out of the wedding, he wrote a piece calling him out for his poor behaviour. Somewhere after the wedding (to which Piers was not invited) when Meghan’s relatives were using the media to attack her, Piers used his platform to interview Thomas Markle in what some may view as an opportunity for him to tell his side of the story. That was the beginning of several interviews and opinion pieces that Piers went on to conduct and write, in which he berated Meghan, calling her unkind; someone who ghosts people when she no longer needs them; a vicious social climber. Each time he interviewed Thomas Markle one could clearly see that he had been coached with lines and buzzwords that would support his narrative. When this was not getting the reaction he wanted from Meghan, he proceeded to attack her work with the aim of undermining it. He ridiculed her when she visited One25 and in a kind gesture wrote affirmative messages on a banana; he has called her work “woke” and “virtue signalling” and accused her of controlling Harry and rubbing her “wokeness” on him. I could go on and on.

Piers will be the first to defend himself on the grounds that what he offers is an objective critique but that could not be further from the truth. Rather than building his argument based on her actions he resorts to name calling, which objectively bypasses critique and turns into verbal abuse. And let’s face it, if Piers was being a fair critic of Meghan you would expect that he would look at both sides of the coin. He has never acknowledged her accomplishments such as the successful Community Cookbook or the Smart Set collection. He will take any opportunity to amplify the negative including retweeting an article by Tatler Magazine naming her their top social climber saying that this is an award she finally deserves. Again I could list so many examples of how Piers bullies Meghan and if that is not enough, he threatens her by calling for the British Media to not cover their events. So where is the public interest in not covering these events simply because one is not happy with Harry and Meghan. The one nagging question I have is, was Piers being honest when he effusively praised Meghan as being smart, friendly, hardworking and a perfect choice for Harry? or is he now being honest with his abusive tirades against her? because the two cannot both be true. He’s either lying now or he was lying in the past in hopes of snagging an invite. And by the way, is there any real evidence of their supposed singular meeting except for his account? Either way, all that says about Piers’s credibility is that he has none! So why do people so readily accept everything he says about Meghan as gospel and why is he enabled?

What people like Piers forget is like the Royals, the media is not above criticism and the British media and in particular the tabloids have engaged in unethical and illegal news sourcing for which they have never been held to account. Piers Morgan was an editor at one of the tabloids when these practices occurred. There is now a legal matter that Prince Harry has brought to court in which Piers Morgan is mentioned and I will leave it there until that case plays out.

In conclusion Piers Morgan has an unhealthy obsession with the Duke and Duchess of Sussex, mainly the Duchess based on the manner and frequency that he talks about them. Once, he threatened to not talk about them and that threat lasted less than 24 hours. 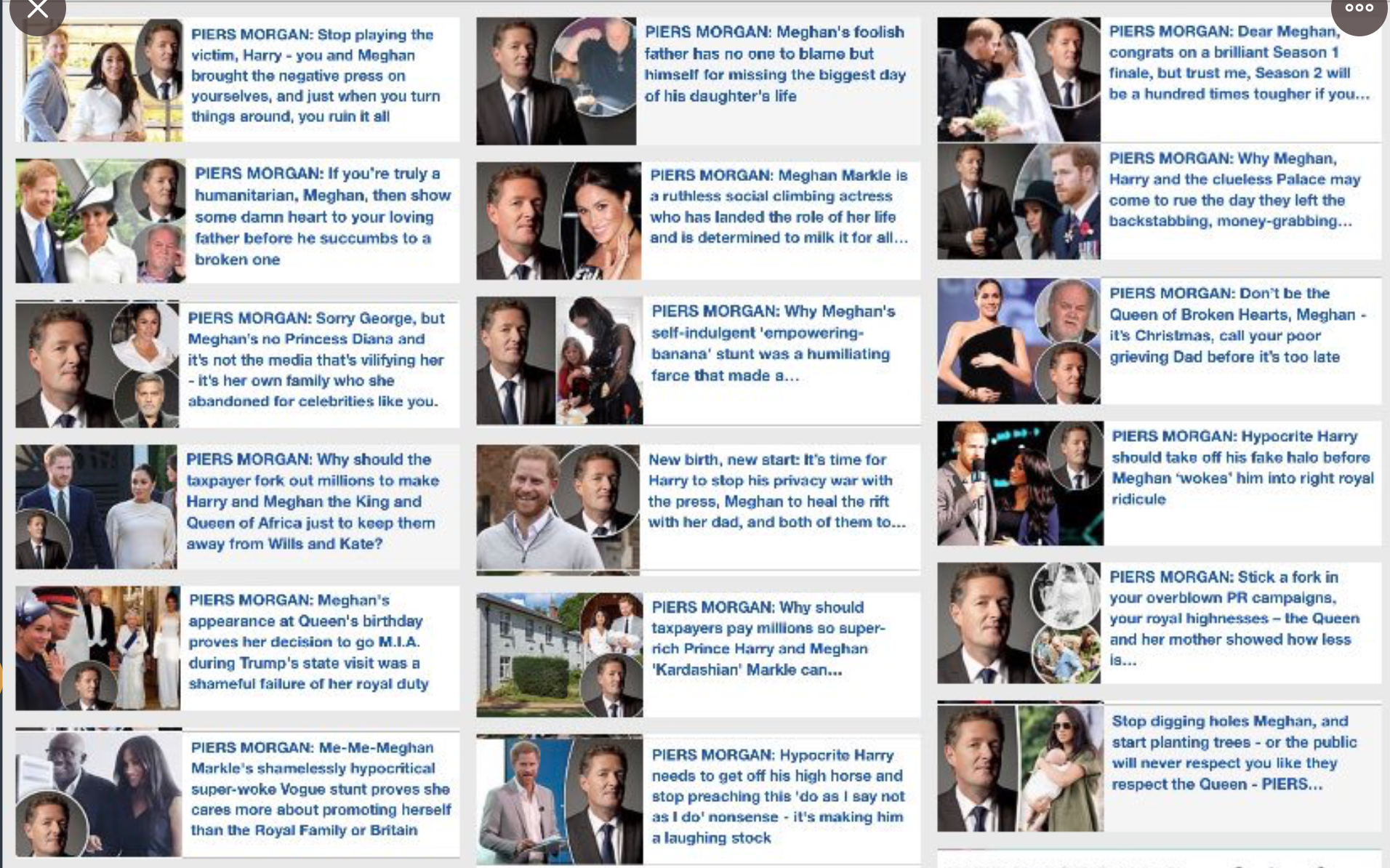 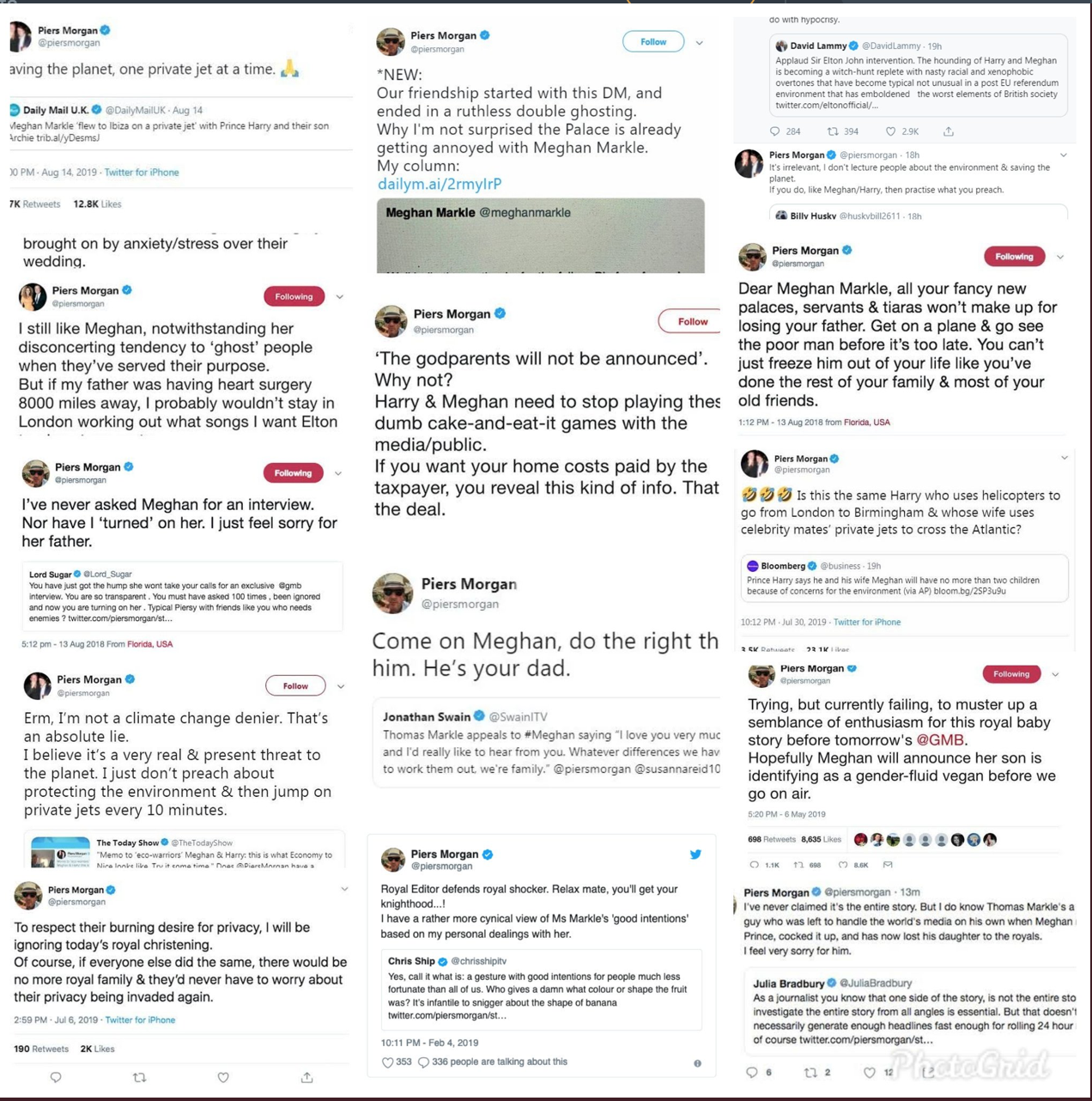 And this does not include when he has appeared on his show GMB on ITV and other TV stations around the world. 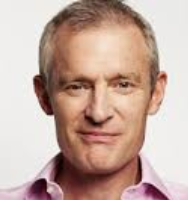 When Samantha Markle made her trip to Europe in a misguided attempt to reconcile with her “sister”( read publicity stunt), one of her stops was the Jeremy Vine show. Already Samantha Markle had proved to be a liar, as much of what she had said had been disproved during the engagement interview. One particular lie was her claim that her father had met Prince Harry, which we later found out to not be the case. Jeremy Vine and ITV have enabled the abuse of the Duchess of Sussex by giving first her father, through Piers Morgan, and now her sister a platform to say unkind things about her.

When we talk about the cycle of abuse, this is what it looks like; whereby fringe comments on social media and narratives in the mainstream media are picked up, amplified and given further legitimacy by TV talking heads. It’s as if there are no people on these TV shows who are capable of doing basic research in preparation for the discussion and take the lies, half-truths, misrepresentations and debate them on national television. Furthermore he continually hosts biased panellists like Carole Malone who present their opinions as facts. Not so long ago when the British media made a stink about the Duchess of Sussex’s appearance at Wimbledon, Jeremy called for their PR team to be fired. I will get back to this.

He hosts This morning TV show on ITV with his wife Ruth Langsford. For the most part he had engaged in the usual rhetoric of repeating the same hyperbole that we have seen around the Duchess of Sussex. One morning, in front of his audience he boldly called the only woman of color in the Royal Family Uppity. For those of you who don’t know, yes uppity when applied to black people has racist connotations to mean black people who do not know their place.

Throughout the autumn of last year when the smear campaign against the Duchess of Sussex was launched, we often read that one of the supposed problems within palace quarters was that she did not know her place. To hear someone say it on live TV was another thing altogether. Eamonn could have left it at that but instead chose to blame the victim to whom he had just called a derogatory name, and just like Jeremy Vine he went on to proclaim that Meghan’s PR was a disaster. He also used his Twitter account to dole out unsolicited advice saying this could all be turned around if they consulted with people “like him” in the media.

There is a pattern here. TV pundits feeling the need to criticise Meghan, using the same talking points, pushing the same narratives and positioning themselves as alternatives.

About That Specific Press Pack – The Photographers – Part 6

The Boys & Girls Guide to Getting Down