The Universal Declaration of Human Rights provides a standard framework that governs conduct and ensures universal protection for people from all regions of the world.

Article 12.
No one shall be subjected to arbitrary interference with his privacy, family, home or correspondence, nor to attacks upon his honour and reputation. Everyone has the right to the protection of the law against such interference or attacks.

Here are all the ways that Thomas and Samantha violate Duchess Meghan’s right to privacy:

Thomas admitted to lying to Prince Harry .Thomas Markle in his own words stated

“Harry told me that I should never go to the press,” Thomas said. “That it would end in tears. He said, ‘They will eat you alive.’ He was right.”

Yet:December 17, 2018 Thomas Markle sold pictures, cards and letters written by his beloved daughter to her father, he threw away her loyalty and stabbed her in the back for 30 pieces of silver by abusing extorting and emotionally blackmailing and slandering the daughter he claims to love. 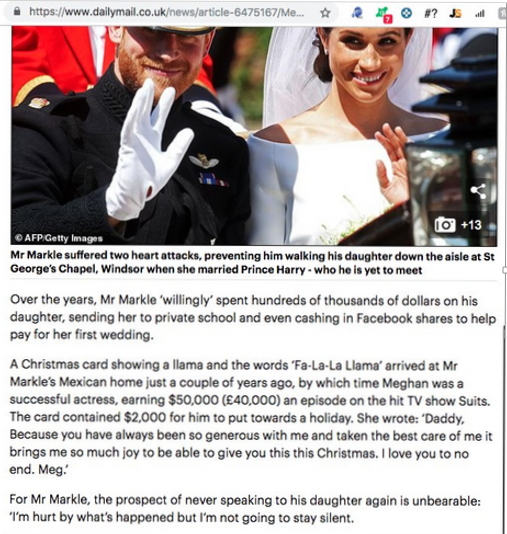 Then there was another one on June 19, 2018 interview on Good Morning Britain he shared intimate details of his conversations with Prince Harry regarding Donald Trump and Brexit. Members of the royal family are expected to nonpartisan and sharing such details proves Thomas cannot be trusted and that he will sell stories to the media outlets that is why Harry and Meghan have kept their distance and dignified silence. He then claimed that this would be his last interview then proceeded to go continue to violate Duchess Meghan’s human right to privacy on the following dates.

Meghan Markle Did Not Abandon Her Family

How Did The British Royal Family Obtain Their Wealth? PART 1