Pamela:
Your tweet on March 13, 2021, caught my attention and stayed in place like a snagged piece of cotton annoyingly flapping in the breeze. Figured I’d write a letter since I don’t have a Twitter account to respond to you and I do want to respond. 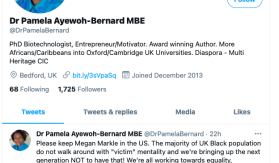 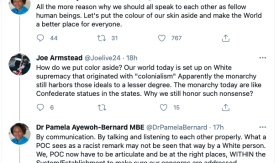 Right off the bat, I acknowledge your credentials: the MBE, university degrees, and whatever you said you’ve done for African and Caribbean communities.
And yet you move with the energy of a Judas and with the righteous indignation of a sanctimonious spirit, to disrespect a member of the royal family, to scorn Blacks outside of the UK, and to ignore a person’s mental health distress and its cause, all to make your point.

I’m a grown woman but, as a child, I’ve had adults such as yourself move through my life. And they were more dangerous and more manipulative and unhelpful than anyone outside my Black race.

I’m part of three generations who’ve lived as immigrants and were born in the UK and also attended university in the UK. Still have immediate family in Clapham. My father was an engineer who helped restore London, helped build those resorts in the Caribbean, helped build infrastructure in the U.S. And because of that exposure and experience, the Black experience should never be weaponized as nationalistic silos of which Blacks are better than other Blacks. And most certainly, not by skin folk who clearly aren’t kinfolk.

“The majority of UK Black population do not walk around with “victim” mentality and we’re bringing up the next generation NOT to have that!”

To make such a definitive—yet, vague on data—statement, is akin to someone making sh*t up as they go along. “It’s just a tweet” as your possible excuse doesn’t work because you took it upon yourself to jump on the platform to puff your chest out and preach.

Getting back to your mention of the “UK Black population,”; As compared to whom do they not have a victim mentality? Because I know you, O Learned One, aren’t about to compare histories of the diaspora and install yourself as judge of my people’s experiences. But that’s exactly how you seem to move through your world, like Queen A-ha-ha, condemning and condoning according to some internal, flawed metric for appropriate Black racial mindset and behavior.

An Open Letter to NBC

With your “the next UK generation” prediction, again, you lord over your contribution to humankind as if no other contributing factors, in combination or as an overwhelming influence, will affect the next generation’s continued rise. AND more importantly that you again, are woefully myopic on your prediction for the rest of the diaspora, as you pointedly dismiss their relevance in your condemnation.
And I’m still wondering about the term victim. I suspect that this is your choice of words to serve as an obvious insult, adding quotations for emphasis, and using it as an adjective —as a qualifier of mindset. O Learned One, who basks in the math and science arena, you prove that book sense doesn’t equal common sense.

How dare you be so dismissive of the trials and also the accomplishments of the Black population outside the UK? How dare you be deliberately obtuse about structural designs through laws, race wars, and cultural biases that were and continue to be used to inhibit and damage segments of a population’s advancement?

The power of free will and lifting of amplified voices grow with each generation in democratic societies, and also encourages better critical thinking skills and freedom to assert oneself and insert oneself into a broader society. And those attributes are not a monopoly held by the UK Black population, as much as your toxic statement implies.

We’re all working towards equality, tolerance and understanding.

Really!! You love to use the royal “we” liberally to elevate the contradiction between your holier-than-thou messaging and your divisive implication. By this statement, you again thump your chest to proclaim something that Black activists and allies of human rights, democratic ideals, and environmental protections are doing beyond the shores of the UK for years.

Since you are putting yourself out there as the Black UK representative, why the need to instigate a comparative discussion over the matter? But you seem to want to go there, so let’s go.

Starting with this fact: UK Blacks are 3% of the British population to U.S. Blacks 13.4% of the population.
Financial Inequality: the ethnicity gap in pay, wealth and property, The Guardian, June 20, 2020: 63% of families own homes, 20% among Black Africans. Black people had the highest unemployment rate of all groups at 9%; most likely to have a household income below £400 a week; Black African and Bangladeshi households have only 10p of savings and assets for every £1 of white British wealth.

Neither side is a bed of roses. The point is that inequalities exist on both sides of the pond. To imply that you’re better off than the other Blacks and that there aren’t underlying structural root causes for those inequalities because according to you “It’s not always about skin colour” that puts you in the junk yard dog category of humans.
But just like your choice for the term, victim, you have a specific remedy that must be followed—“By talking and listening to each other properly.” For the love of God, what does that mean?

People are speaking. Meghan, more specifically, did speak. But you didn’t like what she had to say. You didn’t like how she said it. So therefore, it’s not proper. Where does the “listening properly” come in when you can’t seem to do that much?

“What a POC sees as a racist remark may not be seen that way as a white person.”

So exactly when does the lessons begin? Or is it “Suck it up, buttercup, put your head down and deal with it” or “Chin up, luv, pretend all is right with the world”? You want the abused to understand where the abuser is coming from and show tolerance for their actions. And that garbage is what you plan to propagate to the younger generation? that’s utterly sad and demoralizing for those young people.

And to frame any behavior that pushes back on a racist trope or narrative as displaying attitudes of a victim is alarming and out of touch. Because what also came from that interview with Meghan (and I’ve noticed you haven’t castigated Harry nor included him in your disrespectful remarks, although he was a part of the interview and corroborated his wife’s experiences) was the trauma Meghan felt from such toxic behavior and biases and how it metastasized into feelings of not wanting to live. With all your glorious degrees and distinctions, you understand all about metastasizing, right?

Oh learned one, who has taken on the task of teaching the younger generation. What exactly are you teaching them with your emphatic statement about victim mentality when someone says they needed help, asked for help, and got none? Does their net worth, social class, nationality, gender determine the level of support, level of attention, level of empathy? Because according to your statements, not until they act “properly” can they earn your undying love and support.

What exactly are you saying to the parents of children who have died by suicide because they felt helpless and adrift? Should they have pulled themselves up by the bootstrap, stop playing the victim card, think positively?

You might want to raise your hands up in defense as, I’m being crass. With a toxic person like you, crass works to highlight your mindset. Crass pushes boundaries against your manipulative messaging. Crass stops stupidity with the let’s get along to play along mentality that can make someone who’s hurting feel unsupported.

And on a final note—no matter how much you voluntarily wear the collar and leash and perform as the junkyard dog to protect and uplift the British institutions and values, you are still not a royal. What do I mean? because I can just hear you squeak, “I don’t want to be a royal” or “it’s not about being a royal.” You interjected yourself, as an outsider of the royal elites, to diminish how Meghan felt, as an insider of the royal elites. You have zero credibility to strip Meghan of her experience.

Rachel Meghan Markle is a member of the royal family. Like it or not. And if and when she is in the U.K., and you have the opportunity to be in her presence, you will still have to bob, curtsey, or perform the appropriate sign of respect, despite your shriveled heart’s displeasure. She will not be erased, even if she lives all her days in the U.S., as you claim she must do as the self-appointed gatekeeper of the U.K.

So, while you haven’t used your platform to condemn any problematic member of the royal family, but chose to do so for this POC duchess, you can take two steps back and f*ck off.

Meghan, Duchess of Sussex, will live, love, and laugh as she damn well pleases and will continue to be outspoken and relevant inside and outside of the royal purview. And there is not a thing you, or your hateful words can do about it.