An open Letter of Support for Her Royal Highness, The Duchess of Sussex.

As supporters, we are embarking on a global letter writing campaign to express our solidarity with you and your husband in taking a stand against the often sinister, cruel and misleading nature of stories printed in British national newspapers concerning you, your character, your son and by extension your husband.

We see that there is an obvious campaign of personal destruction and dehumanisation being waged against you and your son. The stories and headlines often attempt to invade your privacy, lie, and impugn you and your son’s character. This is because white supremacists and xenophobes have decided you are in a space you do not belong and must be driven out. We know you have done nothing wrong. In fact, your behavior has been exemplary, you have excelled in your new role and executed your new job in a superior fashion.

Within 24 hours of confirming your relationship with Prince Harry, The Duke of Sussex, a national newspaper wrote about you growing up in a gang infested neighborhood, which was false. This was followed by an article which belabored your “exotic DNA”. We understand why your husband, and your then boyfriend issued that scathing letter to the press in November 2016. Instead of relenting, they doubled down on the attacks and have since piled on with malicious, xenophobic and racist abandon.

The UK media would like the world to believe that your character changed overnight, and you behave like this caricature they have fabricated, when there is overwhelming digital evidence and first hand testimonies from longtime friends, acquaintances, teachers, classmates, co-workers, charitable organisations and old associates to the contrary. They provide flimsy justifications for maligning your character based on what are obvious biased paid opinions from people you have barely seen in the last 20 years.

The UK media claim you have broken protocol which you have not, because you have not done anything other members of the royal family have not previously done, and the media did not say they broke protocol. The double standards are blatantly clear for all to see.

When you were pregnant – one of the most vulnerable periods in a woman’s life – we watched helplessly as the relentless attacks against you intensified with malevolent intent. It was so virulent and toxic your best friends deemed it necessary to publicly intervene on your behalf to protect you and your unborn child. While you were on maternity leave and in the month you gave birth to your son, there were 451 articles written about you in the UK media, and 99.9% of the coverage was negative.

Your son, Archie was compared to a chimp two days after he was born by a BBC correspondent, who was fired briefly and was promptly rehired within two months having not issued a public apology. At seven months, Archie has been called a “spoiled brat” by royal quack and News Corp correspondent Angela Mollard, who repeatedly expresses how anxious she is for you and your husband to separate and divorce due to outside pressures. One can only guess that she believes attacking your innocent seven month son would pile on the pressure and hasten her desired outcome.

Enough. We have seen, read and listened to what’s being said and will continue to challenge the persecution of you and your son by the media, engineered and led by the UK media. There is no good reason for you and your son to be treated the way you are.

We have seen the same members of the media who vilify you on a daily basis express solidarity and support for a member of the royal family that cultivated a 20 year friendship with a depraved, convicted paedophile and child sex trafficker. We have also seen the royal family push back on allegations against this particular member of the family and issue denials of another’s use of Botox and hair extensions. We thus know that the royal family is capable of defending their own, if they so choose.

All we expect is that the same courtesy, right to privacy and respect accorded to other members of the royal family be extended to you and your infant son. We will continue to call out the unprecedented media assault on your nuclear family against the backdrop of your extended family’s stunning reluctance to comment and at times seeming enabling of the poor treatment meted out to you. We stand with you in solidarity to challenge your inhumane and malevolent treatment. 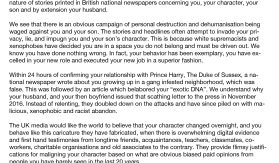 Letter of solidarity for Meghan_Page_1 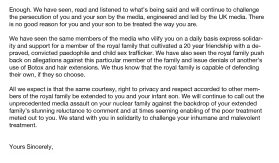 Letter of solidarity for Meghan_Page_2

27 comments on “An open Letter of Support for Her Royal Highness, The Duchess of Sussex”