To whom it may concern:
For the past three years the Duchess of Sussex has endured much racist, xenophobic, misogynistic, and dehumanizing attacks from the reporters of the British media. This brings into focus a particular Royal Correspondent and Journalist who currently serves as a Royal Expert for your network, Ms. Camilla Tominey.

A careful examination of her reporting concerning the Duchess of Sussex reveals an unquestionable amount of bias. She consistently criticizes the Duchess for doing the exact same things other members of the Royal Family have done for years, such as guest editing a magazine, wearing a one-shoulder dress, etc. Either the other royals are praised or the act is ignored. The Duchess has been labelled as “uppity”, which has a long history of a negative view of people of color.

Ms. Tominey reports on information which she knows to be false and when confronted about her false and biased reporting, she either doubles down on the falsehood or denies that she ever wrote it. There is an abundance of proof, also known in the social media environment as receipts, to support these claims.

November 2018 The Telegraph. “Meghan Mosque” by Camilla Tominey. This article basically linked the Mosque in which the Hubb community kitchen operates to terrorism. If you will recall, the community kitchen is made up of women who survived the horrific Grenfell Tower fire in London. It was the Duchess’s first solo project which she initiated before becoming a member of the Royal Family. In September of 2018, she and the women presented a cookbook entitled, Together, which quickly became a bestseller. 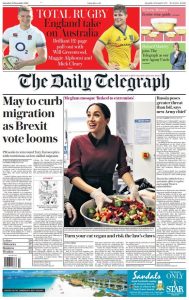 I believe Ms. Tominey purposely titled her article “Meghan’s Mosque“ knowing full well there is a particular section of society that simply dislike people of a certain religious persuasion and she did so without bothering to consider the consequences of her reporting and the individual lives she was putting in danger. She tied the Duchess to violent people who committed horrendous acts years before she ever set foot in the U.K., at the same time, Prince Harry and Duchess Meghan were targeted by right-wing extremists. Ms. Tominey has stated that the Duchess needs to work with grassroots people. The women of the Hubb Community Kitchen are grassroots people, so perhaps Ms. Tominey should clearly define who represents grassroots in her world. 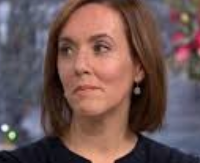 Her claim to fame is that she broke the story of Prince Harry dating then actress Meghan Markle while working as the royal correspondent for the Daily Express. Since then she has moved on to the Telegraph with a Twitter bio that reads “Award-winning journalist and broadcaster. Associate Editor covering politics and royals”.

She is one who will fiercely defend the British press as being free and fair. She often argues that there is no bias in any way shape or form, as far as the reporting on the Duchess of Sussex is concerned. Very frequently she attempts to distance the mainstream media from online media claiming that online media publishes with impunity since the mainstream media is regulated by IPSO (International Press Standards Organisation).

Now I don’t want to go into the details of IPSO, which you can read here, but it is worth noting that each time Camilla is challenged on the standard of reporting she uses the illusion of regulation by IPSO which has been found to be a problematic organisation.

But perhaps one of the areas where Camilla particularly failed herself and journalism in general was in the aforementioned article linking Duchess Meghan and the Together Community Cookbook to terrorism. 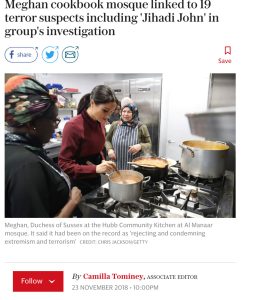 With no regard for the impact such an article would have on the victims of the Grenfell Tower who had been supported by this initiative and are simply trying to get by, Camilla went into full blown hyperbole with this story with only one intent which was to undermine the project and stir up hate towards the Duchess of Sussex among her predominantly right-wing readers. There is no justifiable reason why Camilla would make this kind of association at a time when Islamophobia runs high following the Brexit campaign which has been dogged with distasteful narratives against immigrants and Muslims. If you needed further clarification on her intent, the author of the so-called report she referenced-David Vance, a member of a white supremacy group, later thanked her on twitter for taking their story. 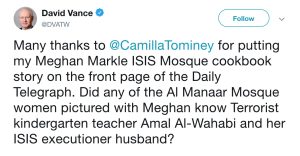 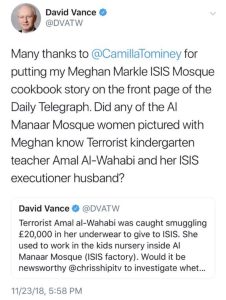 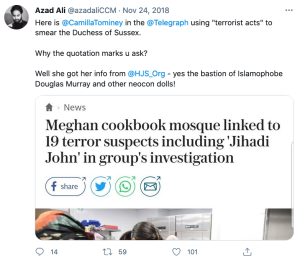 It is well documented that William and Harry all previously visited the Grenfell community and the Al-Manaar mosque while Prince Charles opened said mosque, but Camilla never saw it fit to link them to terrorism. Now why would that be? I will play devil’s advocate and say that at the time, her white supremacist collaborator Mr. Vance hadn’t shared that information with her. Granted. At its core, assuming it had merit, you could call it a terrorism or national security story, so why was it the remit of a royal correspondent? Would Camilla care to explain? If this hate-driven narrative was not enough to demonstrate bias and ill intentions, the Vogue September issue Forces for change, showed the lengths to which Camilla was willing to go to undermine the Duchess of Sussex’s work. 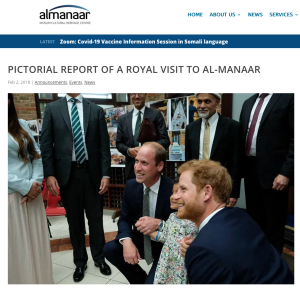 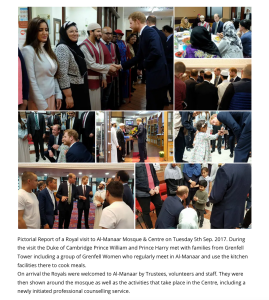 Prior to the release of the September 2019 issue of British Vogue, members of the British Press began writing negative opinion pieces. They were labeling her Meghan Markle, the Actress or the self centered one because they were so sure the edition would be all about her. This is a narrative the media was trying to advance at the time, which was reportedly given life(or possibly birth) by Kensington Palace staffers nick-naming Meghan Me-gain, and letting their media mouthpieces disseminate it. Duchess Meghan destroyed their narratives because much to their dismay, she did not appear on the cover, instead she presented 15 remarkable women as “Forces for Change.”

In the article she wrote for The Telegraph Ms. Tominey states,

“I wonder whether Meghan was conscious of the bias she showed in choosing 15 “Forces for Change” for the British Vogue cover, all of whom were women of which five were white?” Camilla Tominey

Her criticism, in my opinion, is myopic, unfounded and lacks comprehension of the concept of diversity and impact of this project. First and foremost she accused the Duchess of overlooking white women when indeed white women represent 33% of the faces on the cover. In other words for Ms. Tominey, the cover was not “white enough.” How dare the Duchess make the edition diverse and inclusive! Just a little research would have revealed that white women have dominated the cover of British Vogue for many years. She also used this as an opportunity to become the unsolicited voice of older white men, by stating,

“If I was pale, male and stale, I’d be feeling pretty discriminated against right now.” Camilla Tominey

That, in and of itself, echoes a sort of white superiority complex. People swiftly spoke out against the article and lambasted The Telegraph, calling both Tominey’s argument and the promotion of it racist.

Even though Ms. Tominey wants to appear as being concerned about “standing up for the rights of an oppressed minority or gender”, I read her articles as that of a woman unhappy with a woman of color( Meghan) that uses her platform to raise and amplify the voices of other women who are truly members of the oppressed minority and/or gender. Women supporting other women should not be based on race, creed, color, religion or sexual orientation and I would think a properly trained and well-informed journalist would support this.

Earlier in the week of the September issue’s release, she appeared on an Australian TV show where she argued that by choosing to work with Vogue, an elitist magazine in Tominey’s opinion, Meghan was turning her back on the ordinary British public because the £2 cost of the issue was above the means of most Brits, and she should have instead worked with grassroots organisations. This was an indication that at the time of giving her critique, Camilla had not read the magazine because she would have noted a feature on Luminary Bakery – a grassroots organisation providing skills and other social services to victims of gender violence. Not to mention the feature on the food sharing App OLIO which was developed to reroute food to families who need it in their communities, rather than being wasted. Note the irony in this characterization from a woman who associated the Duchess of Sussex’s first project with a grassroots organisation with terrorism.

It was later confirmed that reporters had not previewed an advanced copy of the magazine, and were able to read it on its release date along with everybody. The fact that she was willing to critique the whole body of work without viewing it’s contents flings any iota of ethics and objectivity out the window.

She went ahead to call it misguided and patronising, centering her complete argument that the issue was biased against “pale and stale” folk on an excerpt that was released of a conversation between Prince Harry and Jane Goodall, where they discussed unconscious bias as a product of our environment/ upbringing. Again, without the benefit of the full context of the conversation, Tominey launched another diatribe, deliberately misrepresenting the Duke of Sussex’s comments on this topic and demonstrating her lack of understanding of unconscious bias (or perhaps her refusal to comprehend) when she finally complained that the cover was not white enough with only 5 out of the 15 women featured being white. 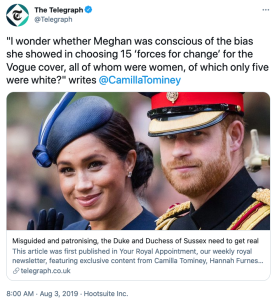 Like Piers Morgan, a full commentary on Camilla Tominey requires an article of its own but thankfully you can find more details at this link. For all her writing or commentary Camilla has never written or reported on the Duchess of Sussex’s successful initiative. At the very least she could acknowledge that saying that most British people could not afford a £2 magazine was misplaced (to put it mildly) because the issue sold out within 2 weeks.

When people question where the online hate for Meghan comes from, they only have to look to triggers such as this. It is worth noting that Camilla has never offered a retraction and there has been no public acknowledgement of IPSO looking into this hate-ridden kind of reporting so it is safe to assume that both Camilla and IPSO stand by and uphold this quality and standard of work.

This woman has no north star and just obeys the wind. When diversity is smacking her in the face, she’s looking for grassroots connections, until grassroots shows up but its not pale and stale enough for her. There is no objectivity here, only blatant bias and agenda-driven narratives. This is not journalism but propaganda. Therefore, based on the information provided, I implore you to reconsider providing Ms. Tominey with a platform to appear on an American networks to spread her lies and biased agenda on an American citizen, HRH The Duchess of Sussex.

23 comments on “An Open Letter to NBC”

And…12 does it!
In the final episode of the #Archetypes series, Meghan explores how men can be an impactful part of the cultural conversation with comedian Trevor Noah, host & TV producer Andy Cohen, & director, producer, & screenwriter Judd Apatow. ⬇️