ETOnline learned from the worst and traffics in Harry and Meghan propaganda. Here’s a recent headline in ET online – “Meghan Markle and Prince Harry’s Netflix Deal ‘Raised Eyebrows’ in the Royal Family.” 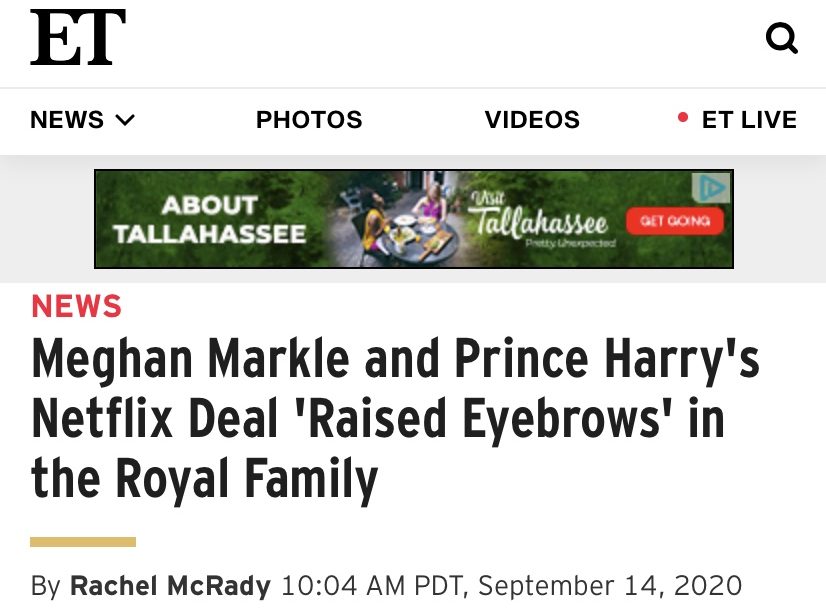 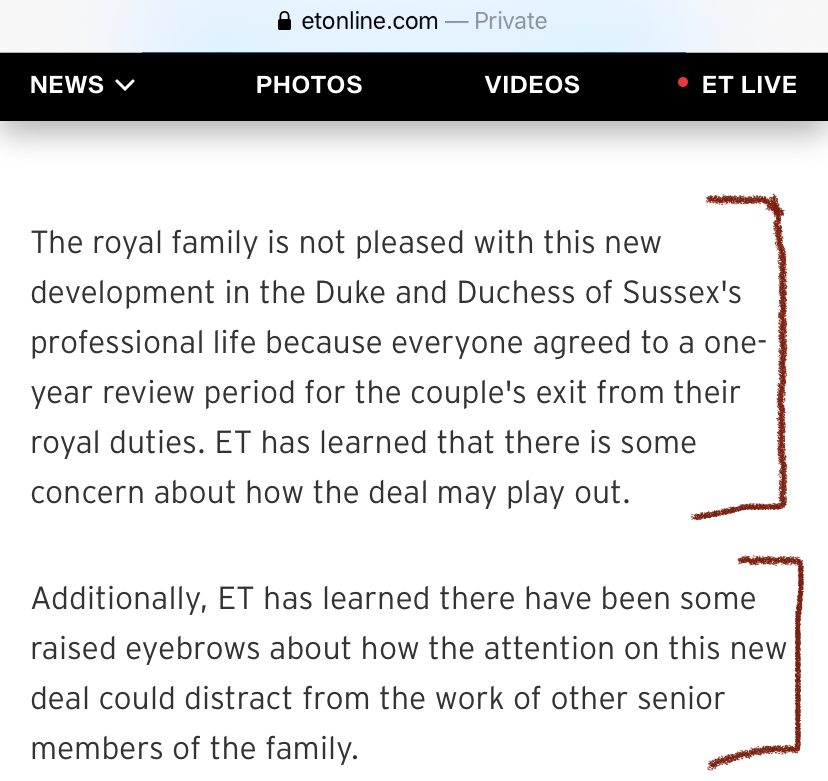 The fact that “raised eyebrows” are in quotes is telling. This is a well-known trick the British tabloids adopt to avoid lawsuits and it allows them to destroy reputations without accountability.

So, it could be that Katie Nichols fabricated the whole story and really she’s representing the position of the British media who are waging a campaign of destruction against Duchess Meghan. This wouldn’t be the first time she has made up stories.

On the remote chance this is true and not a fabrication of Katie Nichols’ imagination, this would be a sad commentary about the monarchy. If a thousand-year old institution cannot work effectively because two former working senior royals are engaged in private enterprise separate from the institution, then it is clear the issue is not what Prince Harry and Duchess Meghan are doing. The institution needs to reimagine itself and its working model.

“ET has learned there have been some raised eyebrows about how the attention on this new deal could distract from the work of other senior members of the family.”

If you ask me, I say they should be concerned about being in an institution that protects a member with many dubious financial dealings and harbors the same miscreant from answering to the FBI on accusations of pedophilia. 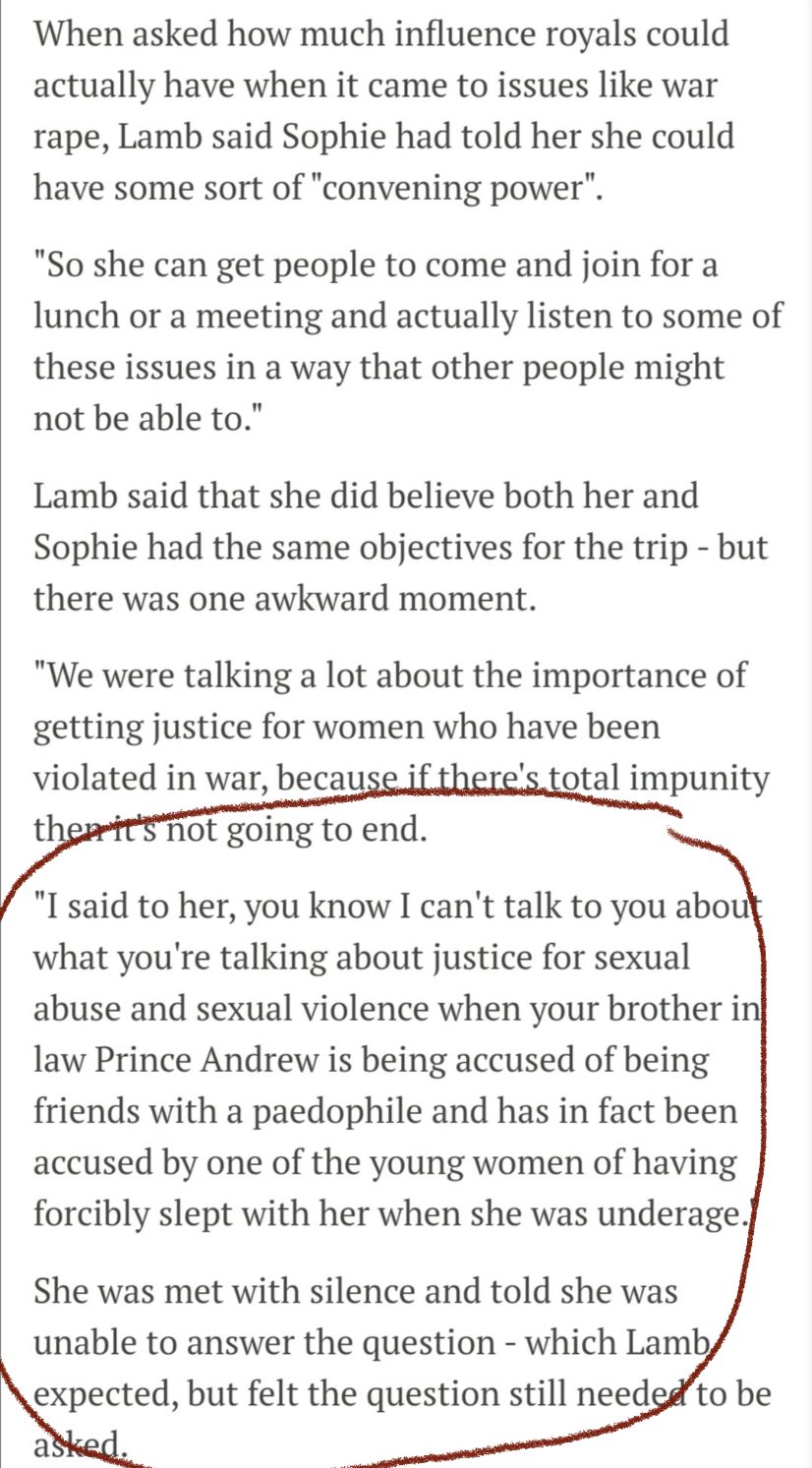 As you can see from the screenshot above, Sophie Wessex was confronted with the duplicitous reality of this institution that is in fact undermining and distracting from their own work, by burying their heads in the sand when it comes to Prince Andrew and his problematic and potentially criminal alliances.

Twenty plus year friendships with a convicted pedophile and child sex traffickers are not values most normal people admire or find inspiring. Prince Harry and Duchess Meghan are inspiring because of their values and actions.

Raising the one year review as a point for complaint, exposes the Royal Family/institution’s true intent in instituting it. For one , we know that Prince Harry was opposed to the review period, in favor of a clean break. You only have to look to the transition updates to see that.

Further, if the one year review period was instituted as a “safety net” for the Sussexes, as has been intimated, why would getting on with the business of standing on their own feet be a wrinkle in that plan? How does the expectation that Prince Harry and Duchess Meghan should lay low for a year even make sense? What a convoluted way to say they are disappointed that the couple are succeeding in their efforts.

They should just say they expected Harry and Meghan to fail, given the copious amounts of money and time they invested in organizing the coordinated, incessant media and troll harassment of the pair. They’d hoped attacking any new organization working with them (through propaganda-fueled media and internet trolls), regardless of the status of some as charities, would scare potential partners away. I imagine that the calculation was that, with such difficulty, they – read Prince Harry – would return to the UK.

Harry and Meghan’s supporters are thrilled that has not come to pass. The Royal Family should adopt their much touted never complain, never explain mantra and get to work to earn the global reverence they desperately seek.

No one owes the British Royal Family global popularity. The British monarchy doesn’t have dominion over the United States for obvious reasons. Prince Harry and Duchess Meghan live in United States, Meghan’s native country where life, liberty and the pursuit of happiness are enshrined rights. The sovereign of a foreign country and her family across the pond don’t have a right to reverence and unearned admiration by citizens of our republic.

The Royal Family should have accepted the interest in Duchess Meghan as a natural outcome of being the new member. Instead they overreacted and sanctioned three plus years of bullying and harassment by royal reporters and recruited over 95% of the British media to join in the relentless demonizing and dehumanization of Meghan.

They told Meghan to go home, that she was not welcome in the UK, called her names, likened her son to a chimp on three different occasions and labeled him a spoilt brat at 8 months old! The fact that the media attacks intensified on Meghan when she was pregnant, all while the Royal Family was maintaining its stiff upper lip was repugnant and many, like me, will never forget and some will never forgive.

The die is cast. Harry and Meghan are off to make a way for themselves. In turn, the monarchy can have their stiff upper lip. I encourage them to keep it.

45 comments on “ETOnline Traffics In Harry and Meghan Propaganda”

Before Harry: The Meghan Markle Interview