Prince Harry recently turned 36 and the couple chose to mark the occasion in typical Harry and Meghan way. They made a generous donation to CAMFED (Campaign for Female Education) a non-profit organisation focused on improving the lives of girls and young women through education in Zimbabwe, Zambia, Tanzania, Malawi and Ghana.

The couple matched the donations of $129,926 from a fundraiser organized by SussexSquad – a group of dedicated fans and supporters – in honor of their birthdays, Meghan’s August 4th and Harry’s September 15th. Their donation was accompanied by the message below on the CAMFED fundraising page. 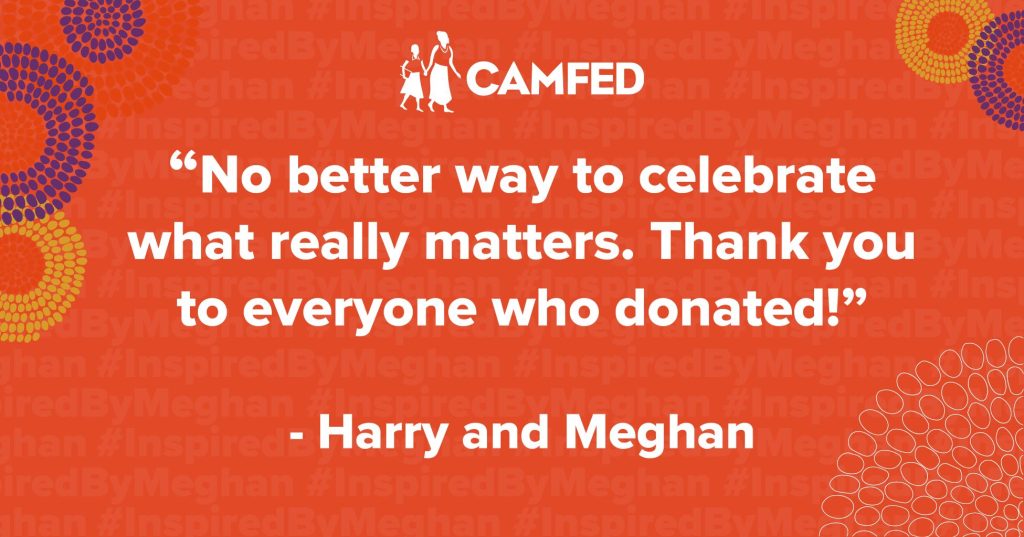 According to CAMFED, The almost $260,000 total raised is enough to support 113 girls and young women through a whole year of technical and vocational training.

“One of the great things about being fans of Harry and Meghan is never being at a loss for inspiration to celebrate them in purposeful and meaningful ways.”

“Fundamental to Harry and Meghan’s appeal is how earnestly they carry out their humanitarian work, serving and embracing young leaders around the world who, as they flourish, make sure that no one in their communities is left behind,” says a quote on the fundraising page.

In the weeks before Archie’s birth in May 2019, supporters of Prince Harry and Duchess Meghan set up a fundraiser called #GlobalSussexBabyShower. CAMFED was one of the organizations that benefited from the donations at the time.

CAMFED makes the connection and said,

“You honored the Duke and Duchess of Sussex’s commitment to community-led change and social justice, and celebrated the imminent arrival of baby Archie by donating to causes that the Duke and Duchess care deeply about. Now we are thrilled to have been chosen to benefit from your generosity as the Sussex Squad celebrate Meghan Markle and Prince Harry’s birthdays.”

“Since its Twitter launch on July 25th, the #InspiredByMeghan fundraiser for CAMFED higher education scholarships, initiated by the SussexSquad, has been the focus of an extraordinary wave of action and generosity from a global network of supporters of The Duke and Duchess of Sussex, Prince Harry and Meghan Markle.”

After Meghan’s birthday, the #InspiredByHarry hashtag was introduced to honor Harry.

The Sussexes have a long working relationship with CAMFED, who Prince Harry supported in his capacity as President of the Queen’s commonwealth trust, followed by Meghan when she became the vice President. The QCT supports CAMFED. Below is a picture of Prince Harry with the CAMFED team in Zambia, when he paid a working visit in 2018.

On International Women’s Day last year Duchess Meghan appeared on a panel with Angie Murimirwa, the Executive Director of CAMFED Africa, and other female leaders and activists for a very robust and insightful discussion on gender equality and women’s empowerment. 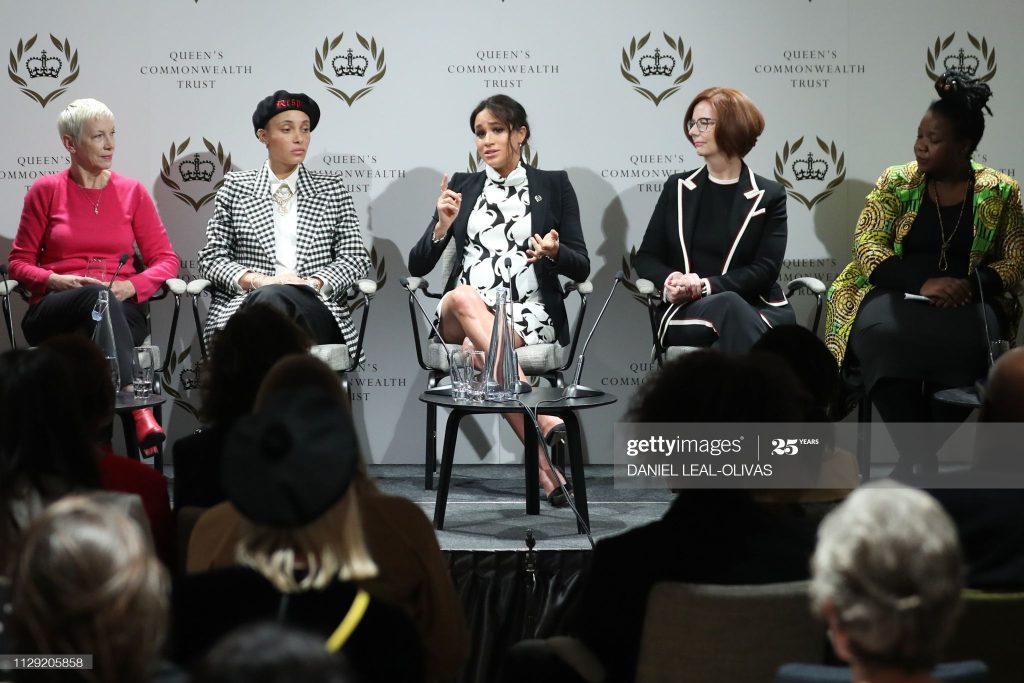 You can watch the discussion on the QCT YouTube page.

During their tour of Southern Africa in September of 2019, The Duke and Duchess joined a CAMFED event in Lilongwe, Malawi; Harry in person and Meghan as the surprise guest via video. While Harry traveled through the region, Meghan stayed in South Africa with Archie who at the time was about 5 months old. When the Queen’s Commonwealth Trust was first established, CAMFED was one of the first recipients of its awards.

According to an article on globalcitizen.org, “Globally, 132 million girls are out of school, including more than 34 million of primary-school age, according to UNICEF. In sub-Saharan Africa, the region that has the highest rates of education exclusion, 23% of all girls and 19% of all boys are out of school.”

“Since its founding in 1993, CAMFED has helped more than 4.1 million children go to school across Ghana, Malawi, Tanzania, Zambia, and Zimbabwe. It has also allowed more than 7 million students to benefit from an improved educational environment through ensuring Child protection, offering study support, and providing educational resources,” the article says.

Visit CAMFED’s webpage to learn more about their educational program and impact. Even though the campaign is over, you can still donate on CAMFED’s page, if you are so inclined.

That Extra Tidbit:
Following the sad news of Justice Ruth Bader Ginsburg’s passing on September 18th, Meghan, The Duchess of Sussex, was one of a group of prominent voices around the world paying tribute and honoring Justice Ginsburg’s legacy. Duchess Meghan has released a statement of condolence saying;

“With an incomparable and indelible legacy, Ruth Bader Ginsburg will forever be known as a woman of brilliance, a Justice of courage, and a human of deep conviction. She has been a true inspiration to me since I was a girl. Honor her, remember her, act for her.“

GoFundMe campaign by Wally Wunga
Country: US – Matthews, NC
Description: La Compassion Orphelinat (orphanage) is located in Selembawu county, in the Democratic Republic of Congo. The orphanage is currently housing 55 children and has one bed room, where all the boys and girls sleep. Due to lack of finances and support, the children would be fortunate to have eaten at least one meal a day. Read more here.

One of the biggest roars from the 60,000-plus crowd arrived with #HarryAndMeghan. As soon as #DuchessMeghan spoke, addressing the inequality of who has received the vaccine globally, she was greeted like a new-gen heroine.
#GlobalCitizenLive @SloanSteed @RollingStone

the sussex new york tour! it was so great to follow these two this week 🤍

They took his mother from him and now they're tryi

They know our power know how effective we are and