Unfazed by all the “controversies,” noise, usual mantra of the tabloid news, media commentators, self-proclaimed clairvoyants and air travel experts, HRH, The Duchess of Sussex continues to work with her Patronages, even though she is officially still on maternity leave.

Seemingly unbothered by all the “hoo-ha” surrounding her and her husband’s recent flight on a private jet to a holiday retreat, Prince Harry’s “amazing” wife has been getting on with what she does best; taking her role as the Duchess of Sussex seriously. So we too will take her role seriously and focus only on the important matters.

A key role for members of the Royal Family is doing good works, particularly charity work. This is particularly fitting for Duchess Meghan, who has charitable roots. Raised by a single mother, she was prepared for a life of helping others. As an adolescent she volunteered through her school in the soup kitchen, helping to feed those in need. Prior to her engagement to Prince Harry, she was involved in a number of humanitarian projects, traveling the globe, penning op-ed, and speaking publicly. In 2014, she began working with One Young World, an international charity and spoke on gender equality and modern-day slavery. She also toured Afghanistan and Spain with United Services Organization (USO). In 2016 she began serving as Global Ambassador for World Vision, the world’s largest international children’s charity, traveling to Rwanda to work on the Clean Water Campaign and to India to raise awareness for women’s issues. She also worked as an Advocate for the United Nations Entity for Gender Equality and the Empowerment of Women, also known as UN Women. In 2017 before the engagement announcement, she traveled with Prince Harry to Botswana and worked with the conservation project, Elephants Without Borders.

Her good deeds are well documented in wikipedia.org and her now defunct blog The Tig where she wrote extensively about being raised to be “proud of who I am;” “proud of my mixed heritage,” “drawing my own box,” and being kind and gracious to those less fortunate. I am sure her mother, at the time, did not know that the upbringing and good virtues she was teaching and instilling in her daughter was preparation for the bigger stage awaiting her.
During the aired engagement interview with BBC, Duchess Meghan stated that it was important to know that Prince Harry was “kind” and it was their shared interests in doing good that got the second date. From the onset, the Duchess of Sussex said she was excited about working with Prince Harry to do good in the world and wanted to “hit the ground running.” We all know she kept her word and did just that.

According to the Royal Announcement,

“HRH The Duchess of Sussex became the Patron of four organisations that reflect the causes and issues with which she has long been associated including the arts, access to education, support for women, and animal welfare.”

Her patronages are as follows:

The Duchess has been “hands on” from inception, giving her Patronages worldwide recognition. In addition, she and her husband, Prince Harry, have highlighted other less known charities on their Instagram page @sussexroyal. It is fair to say that everything she touches turns to gold; be it arts, access to education, support for women, animal welfare, clothes, organizing and writing the foreword for a charity cookbook project, or guest editing a magazine.

All of her work leads back to her Patronages. For instance, her guest editorship of the September British Vogue issue led us back to Smart Works and introduced us to a new charity along the way: Luminary Bakery.
In the September issue, the Duchess spoke about her collaboration with department stores Marks & Spencer, John Lewis Partnership, clothing brand Jigsaw, and her designer friend, Misha Nonoo to create a capsule collection of workwear clothing line which will benefit her patronage, Smart Works.
In the sneak peak preview of the photoshoot to introduce the capsule collection, the music of the late singer-songwriter Bill Withers’ 1977 hit “Lovely Day” played in the background.
This video showed me another side of Duchess Meghan, and reinforced the reason why I am a supporter. The song chosen was very poignant, as was the songs chosen for their 2018 wedding. The following are the lyrics to the song:

Let the words of the chosen song sink into your soul then you will understand why it was chosen by a smart, educated, strong, beautiful woman. I am so looking forward to her return from maternity leave because I am sure she has been busy working “behind the scenes” on her other patronages and I cannot wait to see what she has in store for The Mayhew, National Theatre and the Association of Commonwealth Universities. 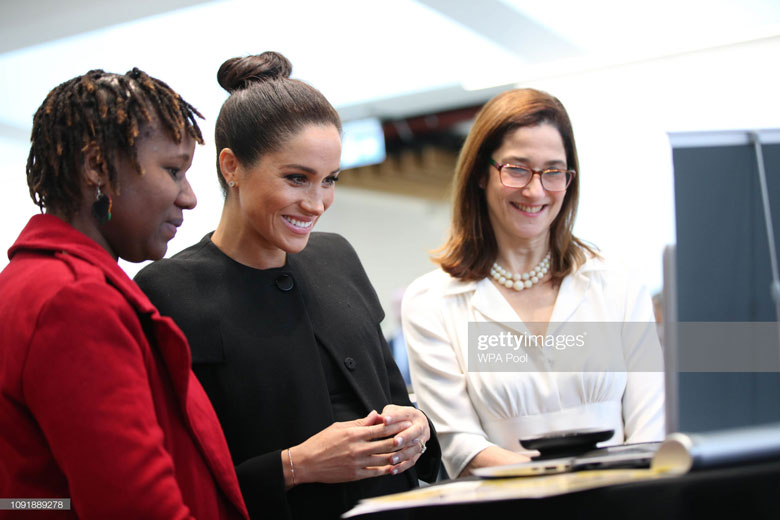 The Duchess of Sussex’s debut at Royal Ascot