The September 2019 issue of Vogue UK, guest edited by HRH The Duchess of Sussex, included a sit down with HRH The Duke of Sussex and the legendary primatologist and ethologist Dr Jane Goodall. It was an interesting conversation, offering an insight into the prince’s and doctor’s varied area of interest. There was a lot that could have been written about but, the following day it was a passing remark by the Duke that made the headlines. From commentators to columnist, tabloids to trolls, there was a unified declaration of outrage expressed as variations of a common, albeit false, theme: Two kids only, to save the planet. A small sample is shown here. 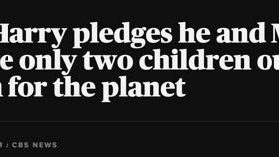 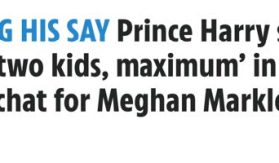 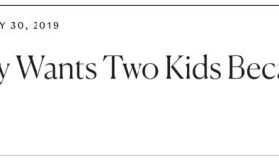 As can be easily gleaned from the text, his remark was an aside from their discussion of the already dire state of climate change. Dr Goodall spoke of Harry’s likely concern for the future now that his child would be living in the future. Harry agreed that having a child made the future more terrifying, but said his concern for future started with the places he’d been and people he had met, which was long before he had a child or even thought of having a child. Dr Goodall jokingly interrupted with a remark that she hoped he would not have “too may”, he responded that the plan was to have two children maximum, the then finished is earlier thought about the planet by speaking of the importance of leaving the planet better than they found it.

To interpret Prince Harry’s remark as him advocating for having no more than two children to save the planet is to put words in his mouth. It is NEITHER STATED NOR IMPLIED ANYWHERE in this interview and for the media to have made that claim and then accuse him of being high-handed is deceitful.

The tabloids made an illogical conclusion from a remark about HIS PERSONAL choice, one that they sought no clarification about, just to sensationalize what was a very thoughtful interview. Disappointingly, the mainstream media took the baton and propagated this manufactured controversy further.

Not satisfied with misinterpreting his remark about his personal choice, they gave his remark about unconscious bias a similar treatment, to the detriment of a real teachable moment. Again, the relevant portions of the interview are presented in the graphic below.

There were those who seem determined to treat it as a personal offense, equating it with being called a racist. Prince Harry’s remark was self-revelatory, not at all accusatory unless you were determined to be offended. He said a remark could be considered racist not because the speaker is racist but because of unconscious bias. That, said unconscious bias, formed by our environment, could have an effect on the way we view others. Unconscious bias was presented as a teachable moment not an automatic condemnation. Ironically the knee-jerk reaction of critics proved the exact point Prince Harry was putting across. A little less protest and a lot more reflection will be helpful. The goal is to foster understanding as a means of equipping us all to do better.

The tabloids had Prince Harry’s clearly written words and still they found a way to purposely misinterpret what was said, yet he is expected to believe that granting them the level of access they want will move them to act in good faith.

To later find out that at the time of going to press, most of the reporters did not possess/had not requested an advance copy of the magazine(see 2nd paragraph of buzzfeed article) and had likely not done a thorough audit of the interview is irresponsible to say the least. At this point it’s become an endless refrain that nonetheless bears repeating: As is customary with the royal reporters and British media to a large degree, their coverage of the Sussexes is rarely rooted in fact, but usually events are manipulated to give a slant that fits with a certain undesirable mold that they wish to cast the couple into. These two instances are further proof that, there is typically more than meets the eye in most reports/stories about the Duke and Duchess of Sussex and therefore by necessity, readers must be circumspect in their appraisal and consumption of such news items.

One comment on “Inside A Made-Up Controversy: Prince Harry And British Vogue Edition”

Who is your Force of Change?

Meghan’s Gems: “I’ve always wanted to be a woman who works.”