I’ve grown weary of the worn out phrases used by British media to continually bash The HRH Duke and Duchess of Sussex as it relates to their desire for privacy.  One most frequently used is, “Taxpayers are paying for their life of luxury,” blah, blah, blah. So I decided to lookup the definition of privacy to be sure I understand. I found the following:

Privacy – /ˈprɪvəsi,ˈprʌɪvəsi/
noun
1.    a state in which one is not observed or disturbed by other people.
“she returned to the privacy of her own home”

o   the state of being free from public attention.

“a law to restrict newspapers’ freedom to invade people’s privacy”

The media continually lambast the Prince and his wife whenever they issue a request for privacy. Yet when Prince Harry posted a message on sussexroyal, their Instagram account, wishing his “amazing” wife a happy birthday, it was his way of sharing with their followers his joy and immense love for his “amazing” wife. The media in all their forms, both printed and visual, came out in full force: “Well, if they want privacy, why are they posting on their IG page,” etc. etc. This obviously caused the trolls and undiscerning public to also have their day by verbally abusing the Duke and Duchess.

“The relationship between the Royal family and the media, especially photographers, has always been a delicate one. It’s been a longstanding battle between the royals wanting to find a balance between privacy, but wanting the public to receive a look into their lifestyle and the charitable things they are involved in.” Katie Hill/Privacy Laws and the Royal Family 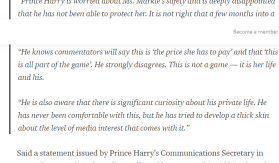 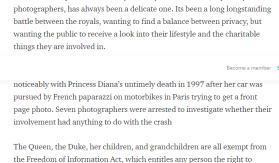 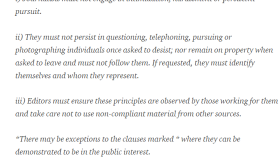 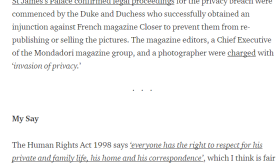 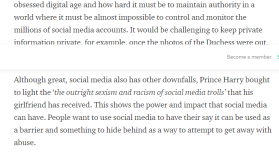 The Duke was happy to share his general happy birthday statement to his wife with their 9+ million followers. What he actually said to her on that day, how they spent time on that day, and even what he gifted her, remains private. The rebuttal by the media and trolls reinforces my belief that they do not understand the true meaning of privacy, so I repeat: “Privacy is an individual’s right to determine what information they would like others to know about themselves; which people are permitted to know that information; and the ability to determine when those people can access that information”.

So, if Prince Harry chooses to wish his “amazing” wife Happy Birthday on their IG page, or share his wish for two children and it gets in the public domain, or if the couple choose to keep the details concerning their son’s christening private, that is a personal choice. They are exercising the right to determine what information they would like others to know.

The Duke and Duchess of Sussex have decided that their son will be a private citizen and therefore his upkeep is solely their responsibility. Deciding that their children live as private citizens is their choice.

The sense of entitlement that British taxpayers believe they have over the Royal family is totally misguided. The taxpayers do not pay the Royal family. This is a common misunderstanding due to the complex history of the relationship between the Royal family and the UK government/treasury. Other than the Queen’s personal wealth, funding for the Royal family comes in two forms: the Sovereign Grant and the Privy Purse.

“The Crown Estate is a collection of lands and holdings in the United Kingdom belonging to the British monarch as a corporation sole, making it the “Sovereign’s public estate,” which is neither government property nor part of the monarch’s private estate (such as Balmoral Castle and Sandringham House) that belongs directly to him or her independent the monarchical office.”

That is to say, this is wealth that belongs to the monarch (whoever that might be) and it goes along with the title. Fifteen percent (15%) of the profit from the Crown Estate goes to the Royal family, and 85% goes to the Treasury.

“The Privy Purse is the British Sovereign’s private income, mostly from the Duchy of Lancaster.“

Bottom line: taxpayers pay only for security as they do for all events when police is required. It is not really accurate or honest to report that the Royal family gets paid and the maintenance of their residences comes from taxpayer money. As taxpayers, we pay for a lot of things we do not have access to information on, so why should the media think they should have access to everything the Sussexes do? After all, if the public was given full access to every aspect of their lives, the Duchess in particular, she would be portrayed as being “too Hollywood”, “attention seeking”, “fake because she was an actress”, “uppity”, complaints that she has broken all Royal protocol, has changed Prince Harry, blah, blah, blah.

The constant demands on access to their private lives borders harassment.

“Harassment covers a wide range of behaviors of an offensive nature. It is commonly understood as behavior that demeans, humiliates or embarrasses a person, and it is characteristically identified by its unlikelihood in terms of social and moral reasonableness. In the legal sense, these are behaviors that appear to be disturbing, upsetting or threatening. They evolve from discriminatory grounds, and have an effect of nullifying or impairing a person from benefiting their rights. When these behaviors become repetitive, they are defined as bullying.”

So British media and their supporting trolls should know their bullying tactics are not working and it’s pastime to stop the madness. The work they do as Royals through their patronages is what the public is entitled to know and they do an excellent job of sharing and that’s what is important. Wanting to know the names of their dogs, how many dogs they have, who visits, the name of the baby’s godparents, images of the interior design of their home, etc. is off limits.

I leave with you a quote from theprivacyguru.com

Duchess Meghan on how she paid for her studies