The christening of Archie Harrison?

Although there is no official press release from reliable sources like the Buckingham Palace or Sussex Royal on Instagram (the official Instagram page of the Duke and Duchess of Sussex), a tabloid “royal source has confirmed” that Master Archie, the son of Prince Harry and Duchess Meghan will be christened on the weekend of July 6th and 7th 2019, exactly two months after he was born on the 6th of May 2019. It was reported that the christening will take place in a private chapel in Windsor Castle – St. George’s Chapel, which also happens to be the place where Baby Sussex’s parents were married and Prince Harry himself was baptized, 35 years ago in 1984.

The christening will be a private ceremony

The news that Master Archie’s christening is going to be a private service seemed to rile up a lot of people, especially the British press which was rather unexpected as most royal christenings are often private affairs with just a few family members, very close friends and the chosen godparents in attendance.

The most public royal christenings get is allowing the press take pictures of the royals, family members and other invited guests going in and out of the church during the christening. The Duke and Duchess of Cambridge allowed this for all three of their children but the ceremony itself was still held as a private service. Again, this is not mandatory and royals have the right to deny the press access to their private ceremonies.

The outrage over the private christening

So why the uproar from the British media now? Why is the decision to exclude the media from the ceremony met with so much backlash and criticism? If royal christenings are usually private affairs, why can’t Archie Harrison Mountbatten-Windsor be allowed to have his day? Oh wait. We know why. It’s because Master Archie’s mother is Duchess Meghan and how dare she want a private christening for her baby, away from the vile British press who have abused, vilified and criticised her since she got together with Prince Harry. 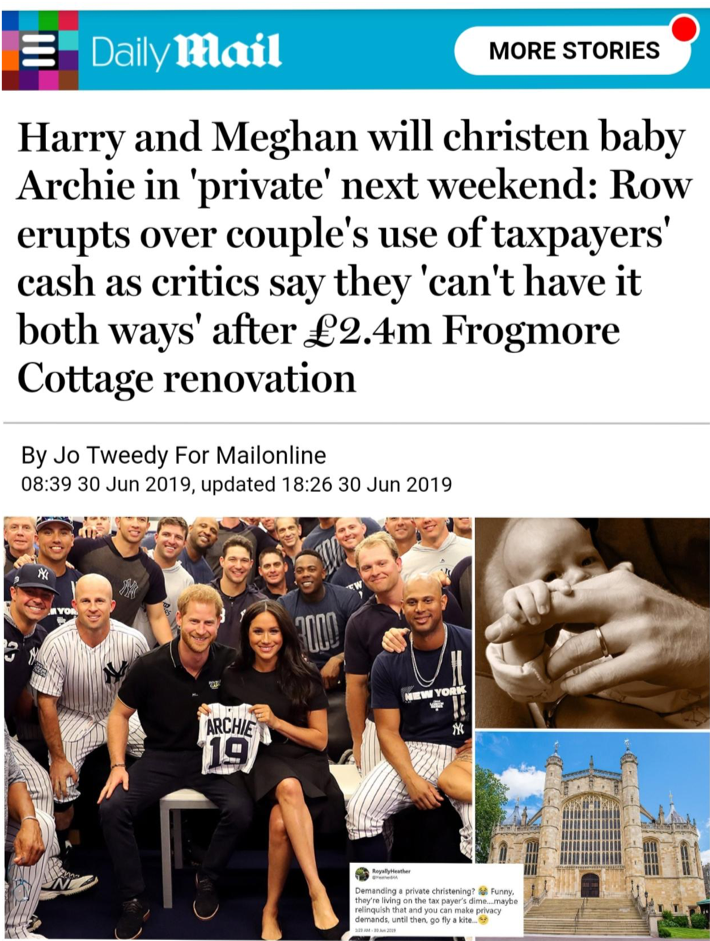 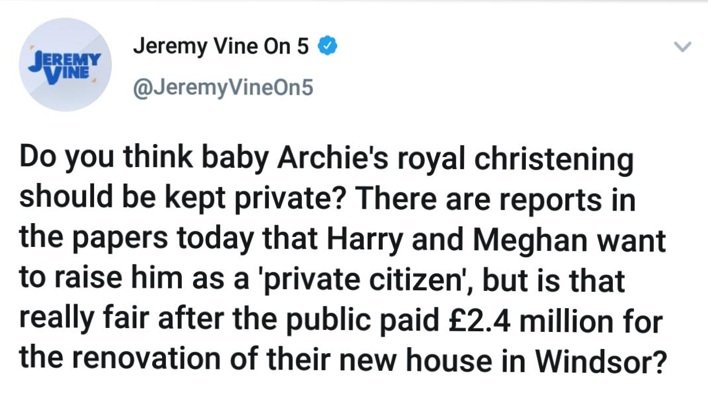 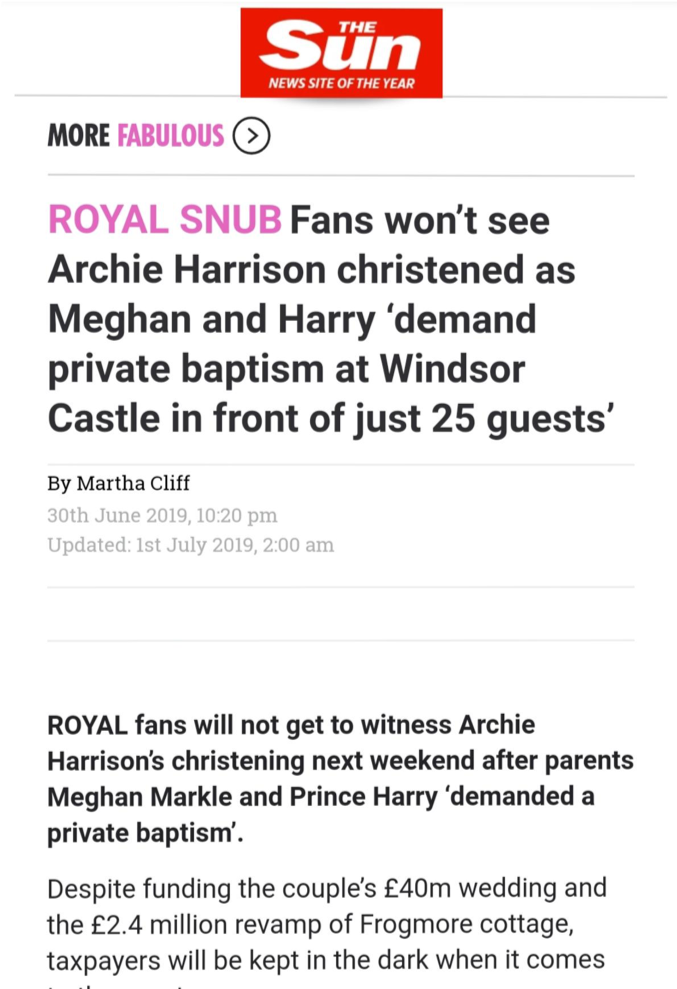 The Duchess has rather unfortunately been under unwarranted and baseless attacks from the British media and it does not seem like the mistreatment is going to go away anytime soon as evident by the recent criticisms. From social media to the press articles, the British media has been mounting pressure upon pressure on the Duke and Duchess of Sussex to allow at least one news corporation access to cover the arrivals, as well as family photographs that will be released.

According to the “royal source”, it is understood the Duke and Duchess of Sussex plan to release posed photos from the christening to the British media outlets from television to newspapers, magazines and websites to the public via their Instagram account – Sussex Royal. This seems like a pretty logical decision any parent will make who has been constantly bullied by the media would make. Why have the abusive British press near you and your child on what is supposed to be his very special day, just for the purpose of taking photographs when you can take the photographs on your own and release them to the media outlets as it pleases? The problem, the British media, we assume have with this arrangement is that it takes the power and control out of their hands. If they are not allowed to cover the event, then they can not take photos and make up stories that will further their agenda against Duchess Meghan. In short, they cannot make any money from this arrangement.

The reason behind the outrage

The Duke and Duchess of Sussex’s determination on raising their firstborn son as a private citizen coupled with the confirmation of the media-free baptism has been met with a lot of criticism as the British media consider the exemption a “royal snub”. Apparently, media outlets and other critics are of the opinion that the couple cannot fund the £2.4m worth renovation of their home – Frogmore Cottage, using “taxpayers money” and demand a private ceremony for the christening of their baby.

A so called “royal expert” Ingrid Seward, the editor-in-chief of Majesty Magazine, who basically criticizes Duchess Meghan for even the most basic things and has body-shamed her on one occasion has unsurprisingly spoken out against the plans of the Sussexes. According to her, the people want to see “lovely family images of the baby in the royal Honiton lace christening gown”. Going by this statement, the assumption here is that the photos of the christening that Prince Harry and Duchess Meghan are going to release to the public are not going to be “lovely family images…” or whatever that means. It is a poor take and they know it.

What exactly is wrong with a parent’s decision to raise their child away from the critical eye of the press? The answer is nothing. But as usual, the British media is having a field day running all sorts of groundless takes on it. At the end of the day, it is undeniably obvious that the outrage from the media is more about being cut out of the ceremony than the public being deprived of photos of baby Archie as they want people to believe. Because the only difference from the Cambridge christenings is the few minutes footage of that captures the arrivals and departures.

Again, the christening is yet to be confirmed by any official source which makes the outrage over mere speculation even more ridiculous. But even if there were to be any truth to it, the Sussexes are not breaking any protocol or tradition by demanding a media free service and they definitely do not owe the despicable British media anything, especially after the inhumane way they have been treating Duchess Meghan. After the smear campaign they carried out against the Duchess, it is only fitting that Prince Harry and Duchess Meghan shut them out of their life and that of their family.

While we believe that the Duke and Duchess made the decision to have a private christening together, as expected, Meghan is getting all the flak for it from the British media. The tabloids make it seem like Duchess Meghan makes decisions alone while it is more likely that the couple make joint decisions for the family. Are we disappointed? Yes. But are we surprised? Not really. This is why Prince Harry does not like the British media, the fact that they relentlessly attack his wife, not forgetting that he still holds them responsible for his mother’s untimely death.

The public outrage towards everything involving the Duchess is exhausting and unwarranted. Duchess Meghan has the right to decide if she wants to raise her child away from the scrutiny of the public, provided she is not dodging her royal responsibilities and remains active in her position as the Duchess of Sussex, which by the way she is. Princess Meghan had been very active in her royal duties up until she had the baby two months ago. She is currently on maternity and we have no doubt she will resume her duties once she is well rested. Until then, the British media need to leave her and by extension the Sussexes alone. 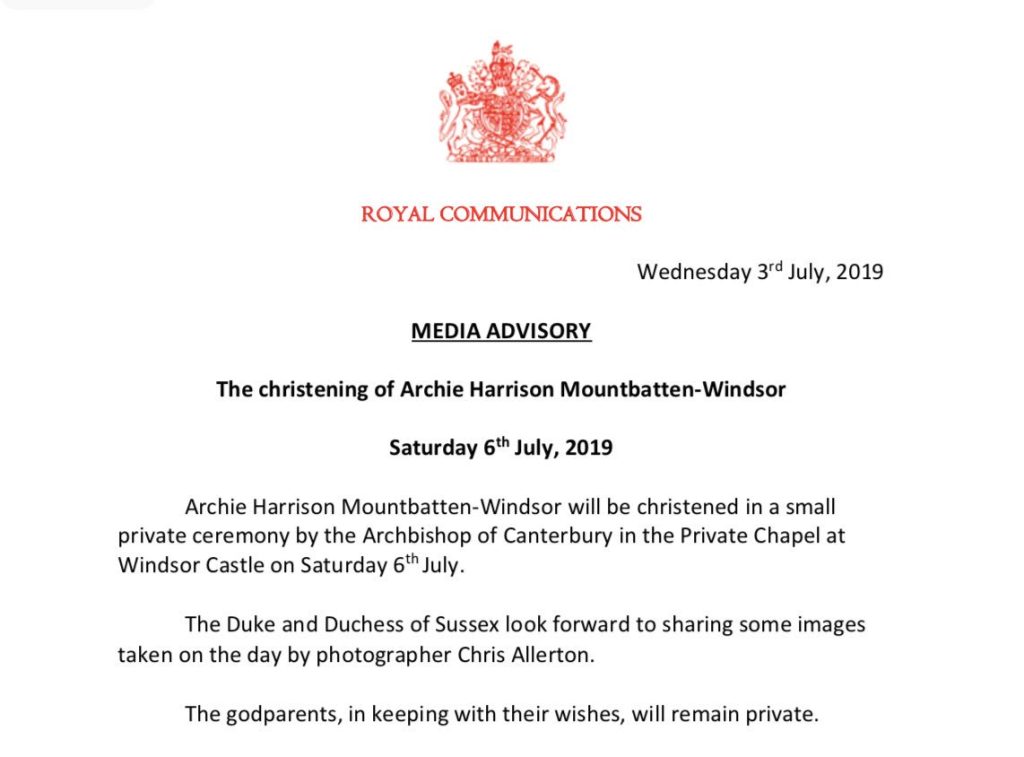 2 comments on “Why Is The British Media Demanding Access To Master Archie’s Christening?”