The renovation of Frogmore Cottage

Recent news from British tabloids reports that £2.4m of “taxpayers’ money” was spent on the renovation of the new home of the Duke and Duchess of Sussex, Frogmore Cottage in Windsor. However, anyone who is familiar with the British media organizations know that they are not to be trusted and their news are more often than not based on lies for the main purpose of misleading the public. It is no different in this case. Prince Harry and Princess Meghan did renovate their new home, and yes, the costs of the refurbishment done so far is valued at £2.4m. However, contrary to what is being carried by British tabloids, the renovation was not funded by money from taxpayers. Rather it was funded by the Sovereign Grant.

While the couple who welcomed their firstborn child just two months ago paid for some of the fittings and furnishings on their own, a larger fraction of the cost of the renovation was borne NOT by taxpayers, but by the Sovereign Grant, the privy purse which funds the official expenses of the Queen and her household. According to the BBC, the renovation covered re-plumbing, replacing ceiling beams, electrical systems, floor joists and extensive landscaping. However, with the way the British tabloids have handled the news of the renovation, it is almost like the couple ran the public treasury dry just to remodel their home.

Why is there media outrage over the “taxpayers money”?

According to the royal aide and Keeper of the Privy Purse, Sir Michael Stevens, Frogmore Cottage which has now been remodelled from five separate living quarters into one large official residence for the Duke and Duchess of Sussex, had been earmarked for renovation for a while now, even before the couple decided to make it their official residence. And get this, it is the responsibility of the Sovereign Grant to maintain the condition of the royal palaces estate and “guarantee the long-term future of the property”, so regardless of if the royal couple moved there or not, the cottage would have still been renovated anyway and the cost of such renovation would have been handled by the Sovereign Grant nonetheless. 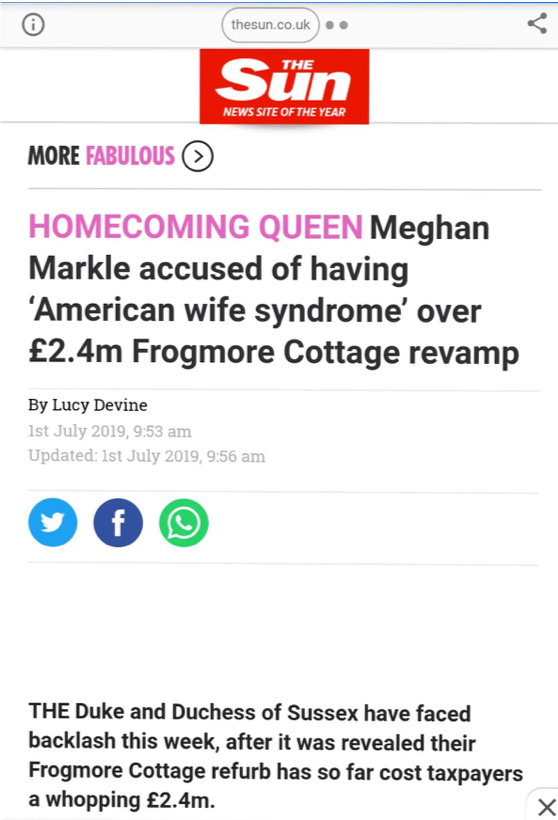 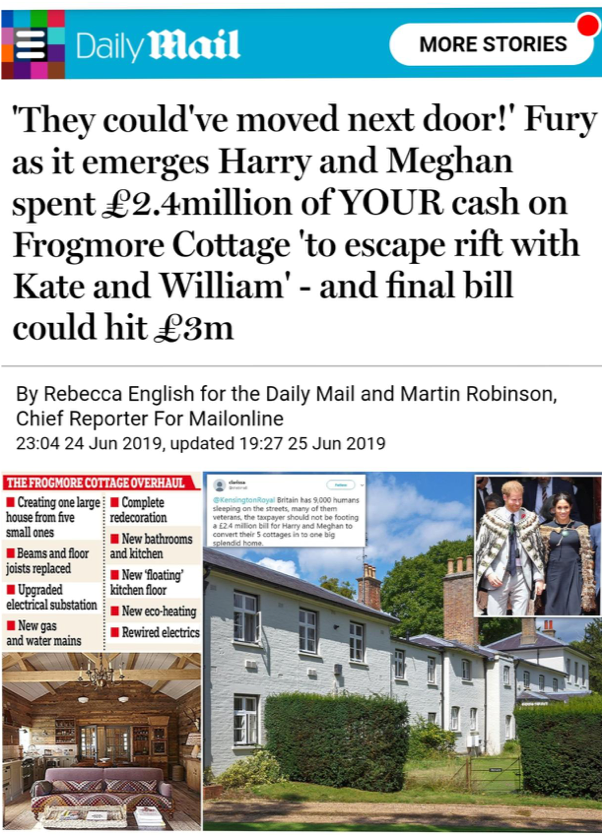 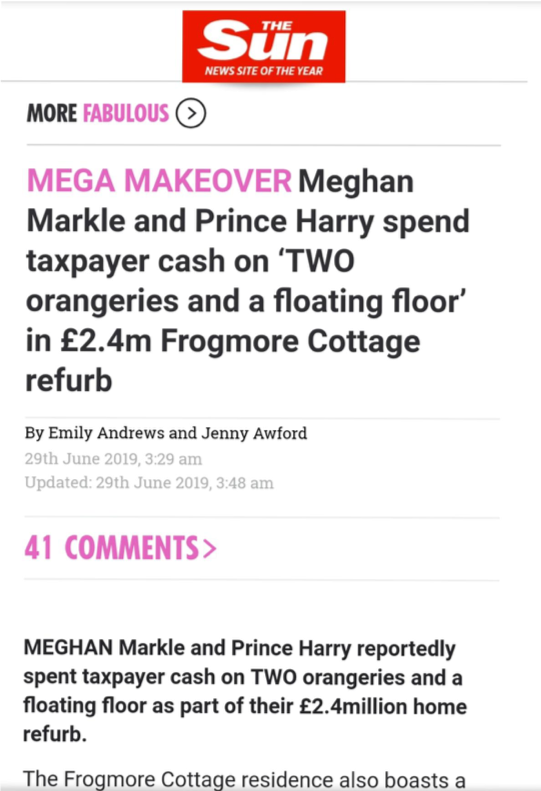 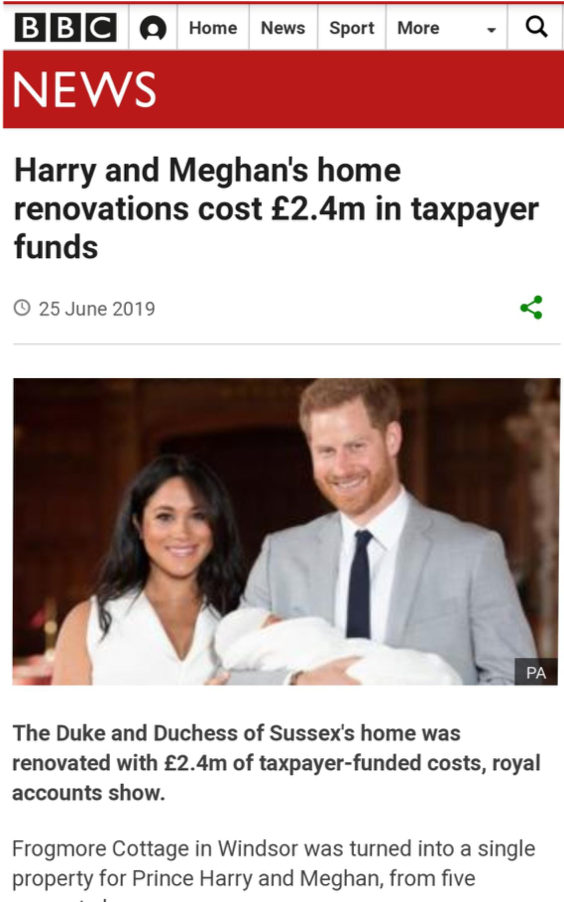 So it begs the question of why the tabloids are making it seem like Duke and Duchess of Sussex, who by the way handled “substantially all fixtures and fittings” do not deserve to have their new home renovated from the outdated infrastructure it was. Now, this outrage would have been understood if the British media made a big deal of all renovations of royal estates funded by the public purse. But unsurprisingly, they do not.

As a matter of fact, back in 2013, Kensington Palace underwent similar renovations to make a home for Prince William and Kate Middleton, the Duke and Duchess of Cambridge and when the project was completed in 2014, the total cost of the refurbishment was valued at £4.5m. And you want to know why you this wasn’t widely reported and carried about by the British press? Because they didn’t care enough to have an outrage.

The £4.5m spent on the Kensington Palace is over £2m more than what the Duke and Duchess of Sussex have spent on the renovation of their home, if there was no outrage then from the media, but this renovation has become the focus of British media attention now, it would not be out of place to say that the outrage isn’t about the Royal Family spending money. The outrage is solely dependent on WHO is spending the money. By who, we are referring to Duchess Meghan in particular. It is really no surprise that the British media have caused a fake outrage about taxpayer money just to attack Duchess Meghan.

Even before she got married to Prince Harry, from the early months of their relationship, the British press had already started attacking the Duchess of Sussex, putting her under undeserving media scrutiny. Is it because she is an American woman married to a man from the most influential family in England? Is it because she was a successful Hollywood actress? Is it because of her biracial identity? Whatever it may be has caused the British media great distress and they are surely not backing down on their criticisms.

Although the couple had lived in Kensington Palace, in the two-bedroom Nottingham Cottage in the grounds since their engagement in November 2017, before their move to Frogmore marks in April this year, just before the birth of Archie, the British media is out to make it seem like they were not going to settle down unless they had spent millions of taxpayers money.

It is also important to understand that even as the renovation of Frogmore Cottage is funded by the Sovereign Grant, the Palace has placed a cap on the installations and as such, if the couple need more furnishings and fittings beyond the cap, they would have to pay from their pocket for the bespoke version. However, very few British tabloids are reporting this. They seem to be more interested in convincing the public that the “American wife syndrome” of Duchess Meghan is why the Sovereign Grant is spending so much on remodelling their home that was in a near dilapidated state.

This would not the first time the British tabloids have tried to smear Princess Meghan’s name over a non existent “taxpayers’ money” issue. Last year, when the couple were married, the tabloids were once again at it, spreading lies about how the wedding of the Duke and Duchess of Sussex was funded by taxpayers’ money. But anyone who cared to do their research would have discovered that the wedding was fully handled by the Royal Family and taxpayers, as much as the tabloids want people to believe, did not contribute at all to it. However, security costs are paid for by the public:

The total recovered for the policing operation surrounding the wedding of Their Royal Highnesses the Duke and Duchess of Sussex is £2,364,690. Thames Valley’s Police and Crime Commissioner

Recently, Republic have also been spreading lies about how the Duke and Duchess of Sussex’s lifestyle is funded by money from taxpayers. However, again this is quite untrue. The Sussexes are catered for by funds from the Duchy of Cornwall and not a penny of taxpayers’ money goes into that. But the British media isn’t focused on that are they? No. They would rather spread misinformation about the “outrageous” £2.4m spent on renovating Duchess Meghan’s home that is making all the headlines.

The British media is hateful and it is ridiculous that they are spreading lies just to make the public to believe that Duchess Meghan’s “extravagance” is costing each individual in the UK thousands of dollars a year. It is a pathetic and fake outcry created by the tabloids to attack the Duchess and once again, the public is falling for it. It is tragic that some people do not realize this is clearly an orchestrated effort to turn the public against Princess Meghan. Hopefully the scales fall off people’s eyes soon and they can see the vile British tabloids for what they are.