A faction of the manipulative press has no thoughtful strategy in mind with their ongoing attacks against the Duchess of Sussex. They spend time reporting unconfirmed gossip, spinning false impressions and falsehoods rather than noteworthy information with substance. Only a few reports highlight how various charities, particularly in the UK, benefit from having the Duke or Duchess of Sussex as a patron.

It’s been three years since the engagement announcement and the constant negative reporting and demands for access to their private lives has become redundant. Instead of objective reporting, many of the “journalists” are playing a one-sided game of chess with Duchess Meghan and thereby blocking donations that many organizations depend on to survive and to help those in need of the services provided. The British media has become the enemy of the people. Some members of the press misinterpret the meaning of being a public servant with hopes to brainwash everyday citizens.

The public demand for accurate reporting is increasing. Many people, and not all are devout Royal watchers, are beginning to reject the guesswork that some news outlets write, and are convinced that media’s preference is to slander the Duchess rather than to report about her charity work. Therefore, they have chosen to educate themselves and seek information that focuses on the work the Royals do to help others. The creation of their Instagram account, sussexroyal has become a valuable resource for those seeking access without invasion of privacy.

Royal Reporters and Correspondents viciously attacked the Duchess and accused her of not being very royal because she was guest editing a glossy fashion magazine (British Vogue, September 2019). They chose not to highlight the positive issues that were covered in the magazine, two of which take place in the UK.

The Luminary Bakery located in Northeast London was featured in the issue.
The Duchess made a private visit to the location earlier in the year, after hearing about the work that they do. The bakery runs a six month training program that teaches women how to bake, educates them on food hygiene, time and money management, and computer literacy. It should be noted that the participants come from disadvantaged backgrounds, victims of domestic violence and homelessness, hoping to get their lives back on track. After successfully completing the program, the graduate is allocated a support worker to help them attain their goals and find employment. As a result of the introduction through the magazine, the owner of Luminary Bakery reports a marked increase in supporters and the possibility of training more women. 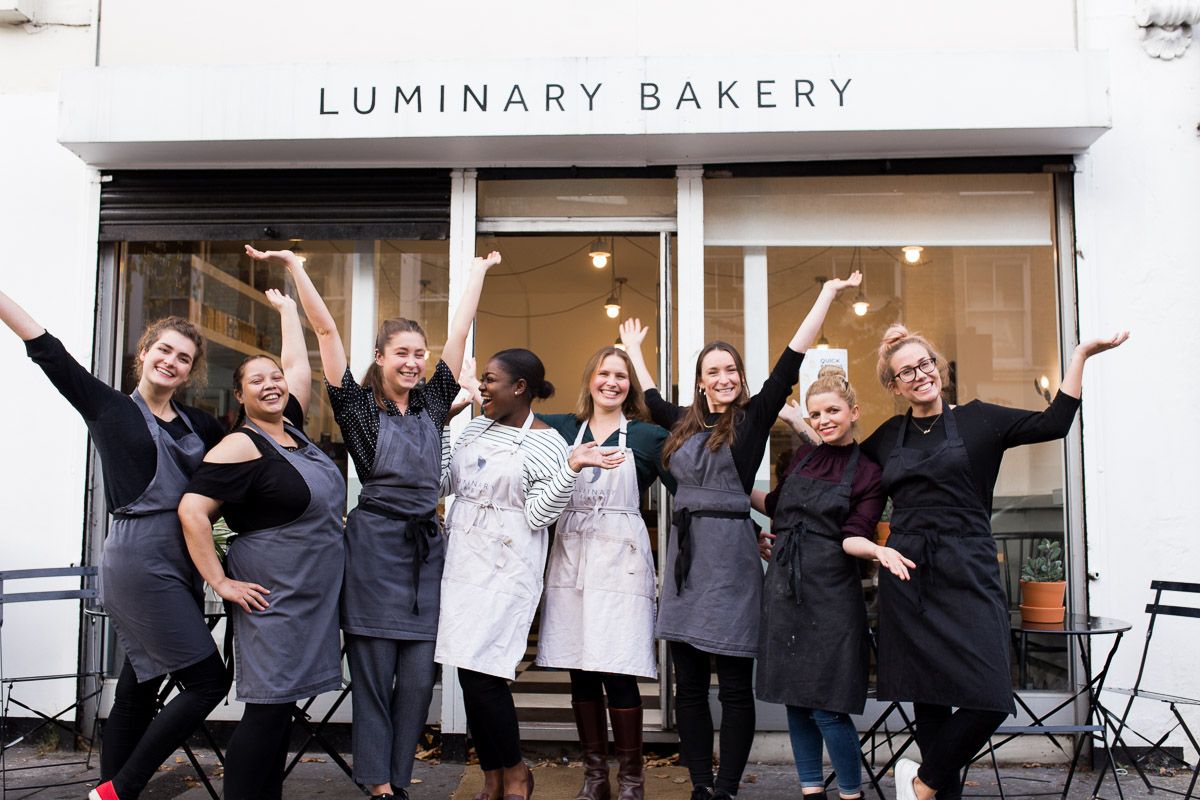 So what is your news preference:

Also included in the September issue was the announcement that the Duchess of Sussex would launch a capsule collection of workwear to support SmartWorks. Smart Works, one of the Duchess’ patronages, helps underprivileged women secure employment. Partnering with a noted fashion designer, two department stores and a brand, this initiative will empower the women of Smart Works to look and feel their best as they enter into the workplace, which can be an intimidating environment for those who have been absent from the job market for a considerable period of time. Speaking about this initiative, Duchess Meghan states,

“Not only does this allow us to be part of each other’s story; it reminds us we are in it together.”

What is your news preference:

(1) Which protocols the Duchess of Sussex broke today, the name of their son’s godparents, OR
(2) the responses from the women who have benefitted from the services of Smart Works?

The Royals help raise money for charities and promote societal change. Concerned reporters should honor, respect, and help promote their causes. Through Sussex Royal, the Instagram account for the Duke and Duchess of Sussex, there was a call to all guests to focus on the environment. A number of environment groups around the world were identified.

The Duke and Duchess of Sussex also attended the European premiere of the Lion King which connects with the Royal conservation work. According to Buckingham Palace, The Royal Foundation will support “Protect The Pride”, a global conservation campaign launched by The Walt Disney Company. This campaign is designed to help protect Africa’s diminishing lion population. Instead of unifying with the Royals, too many reporters and correspondents use their platform to sabotage the charity organizations simply because Duchess Meghan will not conform to their demands for access to their private life and be allowed to take photos of Master Archie. Unfortunately, the petty games the press choose to play in order to capture the Sussex’s attention, slackens the support for important public causes.

The Duke and Duchess of Sussex work to serve the public, this does not mean that the media or others have the right to disrespect and disregard their privacy. Prince Harry issued a formal statement in 2016 and asked the press to stop harassing Duchess Meghan, stating her life was not a game. When helping others, the royals put their lives online like other public service workers, military in combat, and reporters on risky assignments. The public expects the Duke and Duchess to achieve great goals with full knowledge that they do not receive large salaries. Why must their earned income be public knowledge? Please do not state the taxpayers pay their salaries, because they do not.

It pastime for British citizens to educate themselves on the complex relationship between the Monarchy and the government. The Duke inherited some of his wealth from his mother, and how can we forget how poorly she was treated by the media up until the day of her death. He also receives his military salary, and it is ironic how the media displays so little respect for him being a veteran. Duchess Meghan married into the royal family and brought the millions that she earned of her own volition and she continues to earn royalties from the television series. Contrary to the false narratives, taxpayers did not contribute to her wealth.

So the Royal Reporters, Correspondents, and others will continue their smear campaign, spread their false innuendos, and refuse to acknowledge the true purpose of public servants and their work. Conscious-minded people all over the world understand that Duchess Meghan completes her royal duties with commitment and serves those in real need with love and excellence.

For the Royal Reporters, correspondents, and others, please know that we know the end game of your smear campaign is MONEY, regardless of whose lives they destroy.

Stated on the Instagram page of sussexroyal, August 9, 2019, “Words have the power to inspire.” The Duke and Duchess shared the following inspiring words:

“CARRY OUT a random act of kindness, with NO EXPECTATION of REWARD, SAFE in the KNOWLEDGE that ONE DAY SOMEONE might do the same FOR YOU”
– Diana, Princess of Wales