When the 2018 Crown Estate‘s annual report was released for public view, the only item of significance in that report to the British Royal Reporters was the amount of money spent for the renovation of Frogmore Cottage, the home of the Duke and Duchess of Sussex. Every major tabloid’s headline and television shows addressed Harry and Meghan spending “taxpayer’s money” to create a lavish home.

Prior to the issuance of this report, Duchess Meghan was already under attack for refusing to do the Lingo Wing performance on May 6 to introduce the world to their son, and now on July 6 they dare to host a private christening for Archie Harrison Mountbatten-Windsor, denying access to media cameras and photographers and withholding the names of the godparents. This became the breaking point. Royal Reporters turned up the heat. Citizens of the UK and even non-citizens of the UK took to social media demanding the royal couple give them complete access because they used “taxpayer’s money” to renovate their home. Some even demand they give access or return the money.

The host of 5 News Tonight invited Dickie Arbiter, Royal Commentator, to join her to discuss the allegations of excessive privacy, secrecy and abuse of “taxpayer’s money”.

The following is a transcript of the conversation that ensued. I believe Dickie’s explanation was plain and simple, but I’ll let you be the judge.

Host: Welcome back to 5 News tonight. Now Prince Harry and Meghan’s son, Archie Harrison Mountbatten-Windsor is due to be christened tomorrow in a private ceremony with family and friends that will be carried out by the Archbishop of Canterbury at Windsor Castle, and that’s pretty much all we know that’s because the Royal couple have decided to keep the rest secret. There’s been no announcement of who will be the godparents, and there will be no cameras or photographers to capture anyone arriving. Instead the Duke and Duchess say they’ll release an official photo or two afterwards. But all this privacy and secrecy has led to some criticism of the couple. They recently spent almost £2.5 million of taxpayer’s money doing up their new home and now they’re being accused of not doing their public duty. Well here to discuss this is the Royal commentator, Dickie Arbiter. Good evening to you Dickie.

Host: First of all what is your reaction when you found out how private they’re going to keep the christening?

Arbiter: Well most christenings are private. The mistake they made was announcing they were gong to have the christening and also the Archbishop of Canterbury was going to do the christening. But I want to pull you up on something. You just said about having their home made over for £2.5 million in public , uh taxpayer’s money. It’s not taxpayer’s money; it’s public money out of the Crown Estate. Crown Estate last year made a profit of about almost £350 million, which goes to the treasury, of which a chunk goes into the sovereign’s grant which is how the Queen manages her affairs in terms of public duty, how the palaces are renewed, renovated, so it was money from that and not taxpayer’s money. I think you might as well say taxpayer’s money pay for politicians; never criticized. Taxpayer’s money to…

Arbiter: You have to pay for a monarchy. Monarchy money has to come from somewhere.

Host: And then also in terms of taxpayer’s money that pays for weddings and other things .

Arbiter: Taxpayer’s money doesn’t pay for the weddings. Last year’s wedding was paid for by the Queen. Yes, taxpayers’ money paid for security. Who do you think is paying security tomorrow for the Pride March? Taxpayers’ money. So you know it’s splitting hairs a bit. It’s using the soft underbelly of the monarchy to have a go at it; rather than accepting the facts as they are instead of making them up.

Host: Okay let’s get back to the actual christening.

Arbiter: Let’s get back to the christening.

Host: And indeed, where is the line between public and public life and also a private life?

Arbiter: Well first thing, christenings is invariably private. I mean William and Katherine’s children were christened privately. Yes there was media in cali quarters in St. James’ Palace for the christening. There is no room at Windsor to put media unless you put them in the quadrangle, but then you don’t get the ambiance of people arriving one by one. Within the castle itself where the private chapel is, there is no space. So what they’re doing, they’re having photographs taken by their photographer. They will be released. I think people will be happy with that. You know comings and goings is irrelevant. I think the people who are going to be godparents they may want have asked for privacy, they may want have asked not for secrecy but not to be named. It is entirely up to the individual. If they were happy to be named, then they would have been named. Maybe they’re not happy, we don’t know.

Host: Yeah. Why do you think when it comes to Harry and Meghan as you said there are other royal members of the family who also choose to be private in certain areas of their life? Why do you think that they face so much criticism?

Arbiter: I think it’s really having a go. If you look back last year prior to the wedding, Meghan was put up on a pedestal. She was kept on the pedestal after the wedding, and then came the autumn they started chipping away at that pedestal. It is totally unfounded criticism and here we have another example. They decided on a private christening. They decided on – I wouldn’t use the word secrecy, but not to name the godparents and that is another aspect of having a go. It makes a good story, stories sell newspapers and that’s what it’s all about.

Host: Okay Dickie really good talking to you as always. Thank you so much. 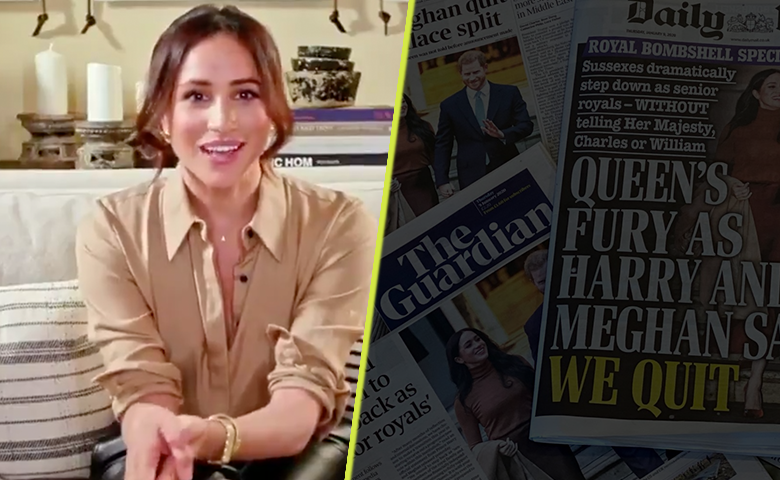 It’s two years since I photographed this lovely moment as five-year-old Luke Vincent reached out for a hug from Harry & Meghan in Dubbo, Australia.

Before Harry: The Meghan Markle Interview

Listen to Ivy's latest podcast on our Meghanpedia

On October 20, join TIME and The Duke and Duchess