Salute to the SussexSquad – Empowered and Fired Up.

“There are times when we must speak, not because you are going to change the other person, but because if you don’t speak, they have changed you.’ Silence doesn’t change the world it changes us. It shrinks us. It takes our stories and feelings away from us and buries them alive. Unearth what is buried within you. Free yourself…” Cleo Wade’s Where To Begin (Atria Books, 2019)

The Sussex Squad is a collective body that coalesces online and embraces all who are Sussex supporters. Some of us are energetic and over-the-top showing our love for all to see, while others are low-key and reserved but still fierce with their feelings. Hang around the squad and you’ll see the various sides of squaddies—funny, sarcastic, bombastic, intelligent, caring, generous, brutally honest and sometimes unfiltered.

For some, the path to the Squad may have started from the pre-royal days when Meghan Markle came online with The Tig, her TV series and movies, or upon the revelation that she and Harry were an item. Or maybe the journey was by way of Harry and his royal life, his engagement to Meghan, the wedding, and the nightmarish campaign to tear her apart. For some, it was the dramatic interview in the African Journey documentary, the exit from the island, the final farewell at the Commonwealth Day ceremony, the official exit from senior royal life, or any of the moments in between those markers of Meghan’s and Harry’s lives.

Wherever we have started, we’re here, forging a remarkable bond of unity and community building around the Sussexes and their charitable endeavors. The Squad pulses with an energy that attracts others to link up and be part of a community like no other. Support travels beyond borders and over international waters with Squaddies raising their hands from almost every continent. We laugh, we discuss, we dissect, we have differences of opinions, but nothing comes in the way of supporting the Sussexes. It’s always the priority. 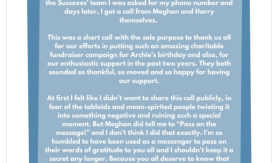 The division of labor occurs seamlessly and with such coordination that it draws astonishment, and a lot of envy, because goals are met with massive success. We have trees planted for Archie’s birth, tens of thousands of dollars donated for Archie’s birthday, and the uptick of awareness raised around issues and charities near and dear to Harry and Meghan. We are a force to be reckoned with, we are more about action than talking about what we could do, more about achieving goals than hosting pity parties around our royal peeps.

We are the self-appointed scouts and sentries of that royal unit. We are the aunties and uncles of King Archie. We are going to defend their humanity from the pestilence of hatred, bigotry, jealousy and dishonesty directed at them. We don’t tolerate racial insensitivity, bigotry, sexist, misogynistic behavior toward a Squaddie or the Sussexes. Any mention from the loathsome tabloids, their reporters or organized network of trolls will initiate an Operation Drag That Ass (ODTA). The media do not get to report their biased news unchallenged anymore. We will not be silent. We will not be complicit. We will not avert our gaze.

There’s mention that the supporters of the brothers don’t get along. The Squad has no rivals or competition since our sole focus is the Sussexes. No other group matters to us. We are unbothered by who is doing what for relevancy, that is, unless they take any member of the Sussex family’s name in vain. The no-fly zone outside the Squad is that no disparaging remarks of Meghan and her family will be tolerated, whether it comes from supporters of other royals or the generic hater/troll. The Squad will initiate ODTA until we are done and finished with them.

Within the body of the squad, there are several organically developed platforms with websites, podcasts, and social media platforms. All independent but solidly united in dismantling the unfair and toxic dialogue around the Sussexes. It’s not uncommon for news outlets to insert themselves into the Squad’s online threads or podcasts seeking engagement. They quickly learn that the Squad is not to be trifled with and is not in need of their publicity. Charities can count on our ability to organize and support because the squad is inspired to build. But we are focused on charities tied to Harry and Meghan, because they are the source of the inspiration. We are not intrigued by trinkets or shiny objects. We prefer substance.

All this success and transformative bad ass energy is affecting. This level of awesomeness sucks the soul of the Meghan haters and trolls. They are so twisted and bitter that their day is incomplete without trying to be destructive. They have sent threats to members of the Squad. They try to hack accounts, make false reports against social media accounts, and spew their toxicity online just because of the Squad’s existence and capacity. The trigger to fragile egos is massive. They want us to go away and be silent for them to continue the abuse of the Sussexes.

20 comments on “Empowered and Fired Up: A Salute To The SussexSquad”