Cheyenne Roundtree, Get Off Meghan’s Back! In the year of our Lord two thousand and twenty, in the throes of a global pandemic, all the handwashing has failed to get the filth off Cheyenne Roundtree’s hands, neither have the shelter-in-place orders shuttered her particular brand of nonsensical tabloid trash from spilling into polite society.

On Wednesday, March 25 2020, we got the news that the Prince of Wales has tested positive for COVID-19, the respiratory disease caused by the novel Corona virus that currently plagues the globe. According to reports, he experienced mild symptoms and was tested on Sunday March 22nd and got his results back on Tuesday, march 24th. He is currently in self-isolation for 14 days at his home in Scotland. The outpouring of support and well wishes for his recuperation were quickly tempered with expressions of frustration that, having what was reported as mild symptoms, he was able to be tested, while healthcare personnel at the frontline of the response, who have been exposed have difficulty getting tested.

This apart from the perceived carelessness of the Prince’s decision to travel over the weekend to Scotland while possibly sick. #Abolishthemonarchy started trending on Twitter. Naturally, as has become standard practice with the British Royal family and their media friends, there had to be a swift dispatch of a Meghan Markle hit piece, to distract readers and simultaneously engage the army of online haters in a Meghan feeding frenzy. Today, the honor fell to Cheyenne Roundtree, a bi-racial woman herself, to do Massa’s bidding. 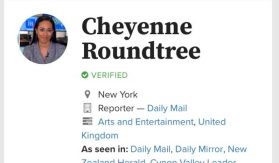 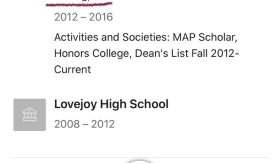 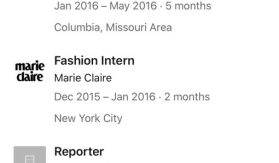 With all her journalistic knowledge that she acquired from her alma-mater Univ. of Missouri at Columbia, she delivered the idiotic “pièce de résistance” that was meant to remind us that, Meghan Markle is really the Corona virus villain that we were all overlooking. The whole premise of her story is stupid. 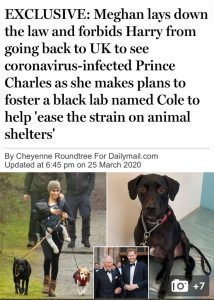 Canada has closed its borders, trans-continental flights carry the very real risk of exposure to the virus in asymptomatic infected travelers and Prince Charles himself is in isolation for two weeks; even away from his wife, who resides in the same dwelling. But somehow, the implication that Prince Harry traveling to the UK would be wise, or would accomplish anything while his father is in isolation, is tossed out like red meat to the predators, so that they can devour Meghan all over again. Any intelligent journalist would know that traveling at this moment is not the most expedient decision.

The Queen is staying put in her Windsor Castle, likewise Harry’s older brother at his Norfolk home. Harry didn’t need Meghan to “lay down the law”. Plus, Cheyenne does not have access to even the faintest whiff of perfume emanating from the outermost circle of Meghan’s friends. It’s all made up BS, and Cheyenne knows it. She just doesn’t have enough scruples or self-respect, to practice her trade with integrity. You see, this is not Cheyenne’s first rodeo. She has been desperately trying to get up the food chain at her tabloid outfit for a while now, on Meghan’s back. 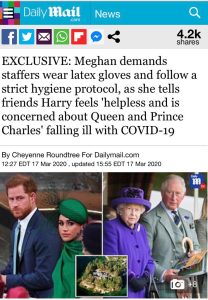 Last week, she had another nonsensical piece out, alleging that Meghan was requiring her staffers to follow a strict hygiene protocol. Not that this tabloid hack has any idea what goes on in the Sussexes’ household, but again, in the midst of a pandemic of a highly infectious viral agent, strict hygienic practices should be the norm. The assertion here, because it’s the reasonable expectation, sounds plausible as a scoop. Its not. Just some creative fabrication with a sprinkling of words like ‘demand’ to make a precaution that everybody is likely exercising, take on a negative connotation, assuming it were true. Just one more reason for readers to hate Meghan. 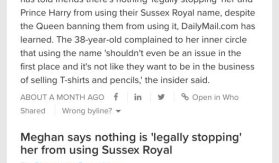 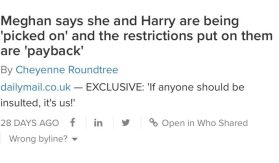 Because Cheyenne desperately wants the world to know, according to her, how bad Meghan is, or maybe she really needs the money, she would regularly repackage the same story under different titles/headlines and hawk it to multiple outlets. As seen in the screenshots above, she’s telling New Zealanders that Meghan says there’s nothing legal barring her from using the Sussex royal name. Never mind that the Sussexes had clearly outlined on their website that they were not going to use the name. For her special breed of Daily Mail readers, she amped up the volume with “defiant Meghan” telling the Queen how things are going to go. Plain evil.

The same tricks are employed with the above story( screenshots) to spread her lies far and wide. The sad thing is that, the outlets repeatedly use her, a woman of color to do their dirty work, to allow them the plausible deniability of racism, which has largely informed the othering of Meghan by the British media. Surely, a woman of color wrote the story, the coverage cannot therefore be motivated by racism can it ? wrong. Cheyenne is just a pawn, being used by editors to further their anti-Meghan agenda. Unfortunately, she is happy to oblige, for whatever compensation she receives. Let’s be clear, I am by no means suggesting that, women of color journalists should lose their objectivity when the subject is a person of color. What Cheyenne is producing is no hard news or ground-breaking journalism. Just malicious gossip. One has to wonder what would drive any person, let alone a woman of color to relentlessly malign another for profit? I cannot imagine it’s honorable. 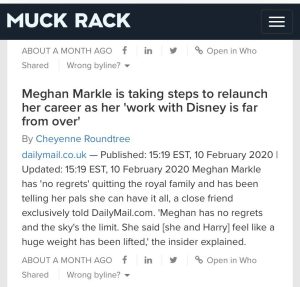 This woman just won’t stop. Even though it was publicly known that Meghan was doing a voice over for Disney in return for a donation to the conservation charity Elephants Without Borders, madam Roundtree found a way to twist that into some kind of conduit to Meghan resurrecting her career. Of course, the source was supposedly a close friend, exclusively to her. Yea right. Anyone who believes that Meghan’s friends will speak to anyone at the Daily Mail, an outlet she is currently suing for breach of privacy, lives in an alternate universe.

In January, hot on the heels of the Sussexes announcement to step back as working royals, Cheyenne was going to have a piece of the pie. Several pieces, actually. During that period, Tom Bradby had mentioned that, a lot of unsavory things went on behind the scenes, and that the royal family would be wise to accommodate and not antagonize the Sussexes through the transition otherwise, if they ever did a tell all interview, it will be disastrous for the royal family. So, to stir the pot, here comes a totally unfounded piece about Meghan giving a sit down interview to Ellen. Of course at the time, it fed perfectly into the narrative that Meghan wanted to monetize her royal affiliations or whatever. She was so proud of the piece that she retweeted it. 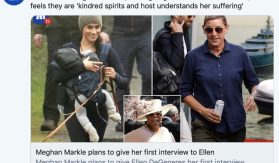 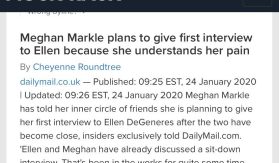 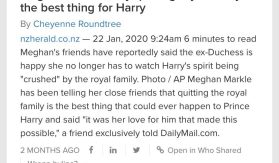 Don’t forget the stories about how “Quitting the royal family is best for Harry” if you’re reading the New Zealand Herald version or “Harry will flourish now that he’s left the family” if you fancy the Daily Mail. Same content , different bow. Oh and of course this was an exclusive from a close friend. Inner circle. At this point, I question even her imagination. What happened in their creative writing class? 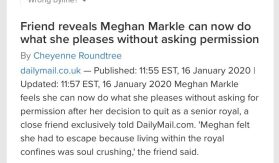 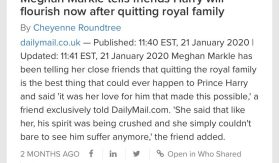 But hey, hustlers got to hustle so, let’s get another slice of the pie with another outrage-evoking story: “Friend reveals Meghan can now do what she pleases without asking permission”. Remember the Meghan Markle who always broke protocol and didn’t want to follow the rules of the monarchy? Yes, that one. Now she’s got what she wants. And by the way, she “ has the full support of Doria Ragland”. Why not drag the courtly mother of the Duchess, who has maintained a dignified silence and admirable discretion about her daughter’s affairs, into the crosshairs of riled up detractors?
If you were not paying attention, you would not have known that the separation agreement between the Sussexes and the royal family explicitly stated that they were free to pursue their charitable and financial ventures without palace oversight. Those are the terms. They do not sound scandalous until Cheyenne informs us that, Meghan’s “friend” says now she can do as she pleases. 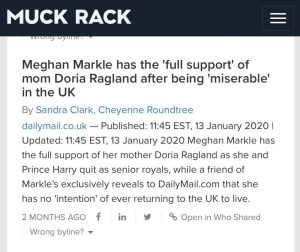 These are the spoils of one woman. One who got a degree in magazine editing from a respectable institution of higher learning and who appears to have been unsuccessful at charting an honest and dignified career path, and is now reduced to a gossip girl at none other, than the Daily Mail. 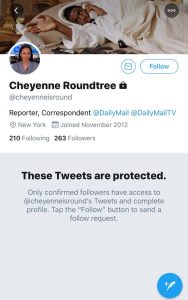 For a person who had no qualms about heaping a pile of bullsh!t stories that serve as fuel for the abuse of Meghan, it was actually pathetic that she quickly locked her Twitter account, once people started to challenge her on her most recent anti-Meghan Corona virus hit piece.

To Cheyenne Roundtree, tabloid hack extraordinaire; Enough of the nonsense. Get off Meghan’s back and make an honest living. For all the hate that you’ve driven Meghan’s way, you couldn’t even stand to answer legitimate critiques of your “work”. You ran because you have no integrity or substance. That is the difference between you and the woman you seek to destroy, to make your way in life. A fraction of whose accomplishments, you can only dream of. It is why you will remain at the bottom of the barrel, as she soars to even greater heights. You know why darling?, because you will reap the harvest of your corrupt seed.

17 comments on “Cheyenne Roundtree, Get Off Meghan’s Back”

Why I admire HRH Meghan, Duchess of Sussex, Princess of United Kingdom

The Duke and Duchess of Sussex’ visit to Birkenhead