The Difference Between the Sussex Squad and M3gxit.

The introduction of Princess Meghan to the world was greeted in two ways. In the world at large, it was seen as something good – to be celebrated. Finally, the bastion of white exclusivity, the apex of British aristocratic society had welcomed into the ranks a woman of color. Meghan was supposed to be a breath of fresh air! I for one was ecstatic.

This piece is not to re-hash the torrents of hateful slanderous stories churned out by a racist press. This is a brief piece written in response to the disingenuous article by one Jennie Bond in which she equates the Sussex Squad to the abhorrent sinister hate group lurking in social media and going by the name M3gxit. (The number 3 is a personal thing I use to keep from giving the hate group any publicity. Those in the Squad know the real name and why I type it this way.)

In Jennie’s article she asks the stupid question “why is there such vicious rivalry between the two fan groups?” 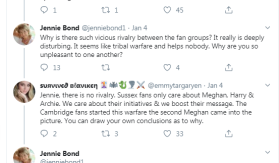 The twitter exchange shown above is a prime example of a gaslight operation in action. She even goes on in a further exchange to claim she doesn’t know what M3gxit is!

Exhibit A for Miss Schultzie “I know nothing” are the following death wishes. 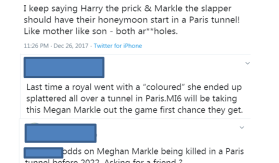 Aside from the alarming racist & sinister tones of these exchanges, the level of disrespect is astonishing! These are just a few. I did a twitter search and if Jennie Bond was a real journalist and not a glorified has been gossiper, she would know who and what m3gxit is! But I keep forgetting – she knows what it is. I heard a definition of the term gaslight on the radio this weekend. It’s like someone balling up their fist and punching you in the nose. You look at them in shock and ask why they did it. The gaslighter says I didn’t punch you in the nose. You ran into my fist. They then proceed to scold your carelessness for running into their fist. If you fall for it you walk away dazed and angry with yourself for being so clumsy. We, in the Squad are NOT falling for these tactics. Not from people like Jenny Bond or any of her other comrades in infamy.

Exhibit B for the “See no evil, hear no evil – Unless is it About Princess Meghan’s Spending” contingent is the moon bump conspiracy theory espoused and propagated all over the internet by m3gxit. These theories make no sense since it would stand to reason that the entire royal family is party to some insane pretense about Prince Harry’s ability to procreate with his biracial wife. I give you the following twitter images. 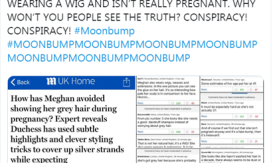 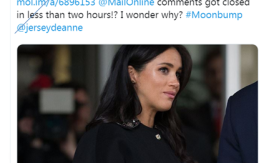 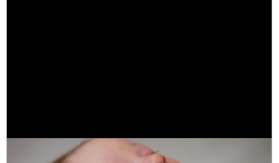 I point out all these things because while the Sussex Squad may have members that get a bit raw at times, one thing we have NEVER done – as far as I know, is imagine and publish hopes that Kate Middleton would meet her demise in a Paris tunnel. None of us ever spread lies around the internet that she faked her pregnancy. None of us ever accused her of presenting a doll to the public. And none of us followed her all the way across the sea to another continent to harass and heckle her and call her a charlatan. 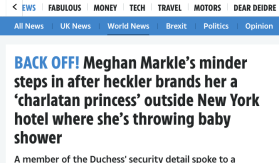 Let me end this on a congratulatory note to the Sussex Squad which was birthed out of the desire to combat racism and hate with good. The beginning of this group’s ability to harness good will was demonstrated by the massive success of our fund raising initiatives and our whole hearted financial support of the charitable organizations supported by the Duke & Duchess of Sussex. As Australia burns and loses thousands of trees and wildlife, the Sussex Squad is standing in the gap with financial support. We are even ahead of the curve as far as supporting the environment with our tree planting initiative which has as of this date seen THIRTY THOUSAND TREES planted and counted.

I know the m3gxiters that masquerade as Cambridge supporters have tried to get a couple of fund raisers off the ground in competition with those who support the Sussexes. If they were successful, I have yet to see it. But the Sussex Squad is like the people it supports. We don’t just talk the talk – we walk the walk and produce results.

In conclusion this is meant to state once for all there is no rivalry. There could never be a rivalry. The Sussex Squad is NOT a fandom. It is a global group of people committed to the support of a family against death threats, harassment, and conspiracy theories. Any royal reporters who want to talk about this group should get their facts straight or shut up.

9 comments on “The Difference Between the Sussex Squad and M3gxit”

Kate vs. Meghan: Princesses at War? The Facts Part 2