The Meghan Effect Triggers Toxic “Feminists” Like Emily Giffin. If you don’t know what the Meghan effect is then hit your search browser and look up Meghan Markle, look up Duchess of Sussex, look up Prince Harry’s wife. The phenomenon is real. There is power to Meghan Markle’s name and her magnetic personality that, at the time the royal family/British media started “marketing” the Royal Fab Four, no one imagined that Meghan and Prince Harry would outshine the king-to-be and his wife. Almost instantly, the soaring popularity of Harry and Meghan as a couple, and Meghan, as her own woman, was undeniable. That meteoric rise translated into people being interested in what she wore, what she ate, who her friends were, what charities she supported, and simply admiring her beauty and charm.

The tabloid media swarmed to right the scales of royal justice with the fury of outraged avengers; to infiltrate, instigate, corrupt, and destroy by escalating false narratives that generate money for their institutions. Misleading angles to stories, constant insults, rabid vitriol by television presenters joined in to shred any positives about Meghan. Their efforts began the construction of a racist, misogynistic, and classist platform designed not only to destroy but to obliterate Meghan’s shine and shade her accomplishments. The idea is to make her life so miserable and her reputation so damaged that she is not a viable commodity to interested parties. This campaign is heavily focused on Meghan, more so than Meghan and Harry, or Harry, as a solo entity. 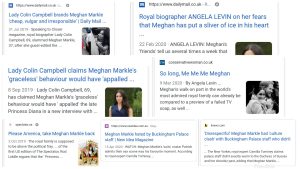 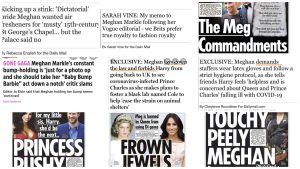 While the Meghan effect has not dimmed one bit, the backdrop of active sabotage continues with the additional insidious fallout from triggered trolls who make insulting Meghan a passion project. For the most part, these haters are faceless. However, there is a niche of men and mostly women who earn a living tearing down Meghan and exploiting the misogynistic themes against her. The British tabloids scum have opted for a career mining the sewers of investigative reporting and serving up its smelly contents on shiny platters for consumption. And this daily diet has fed the British for so long that it’s part of life.

There is a societal passivity that is mind-boggling for, on the one hand, there is a gluttonous acceptance of the negative bile, while on the other hand, there is a surrender to the abuse hefted by these institutions. It goes without saying that, not every Brit subscribes to this tabloid impregnation. However, suffice it to say that if you drew a Venn diagram of self-proclaimed royalist/traditionalist(in and outside the UK) and British tabloid/royal media consumers, there would be a massive intersection. And within that toxic heap, we come to author Emily Giffin for whom the Meghan effect seemingly causes sleepless nights.

Here is a fine example of someone losing their self-awareness and self-respect in a public display of stupidity and brazen, mean-girl spirit. She, like the others of her ilk, probably feed on the same teat of spite and bitterness. As a writer of women’s fiction or chick-lit books, she proclaims herself a feminist in her bio. This self-proclaimed feminist uses her platform where she publicizes and opines about her stories geared to uplifting, celebrating, highlighting women to also deliver her “honest and unfiltered” trashing of women. Way to go for feminism!
That continuous diet is fed to her readers like a steady drip of poison that they appear to accept with likes and follow. And it’s with that energy that Emily mimicked the talking points from the tabloid sewers, showcased her obsessions with cardboard cutouts, and siphoned off her brand of feminist ideology to be a cow dung spreader on Archie’s birthday, via social media. 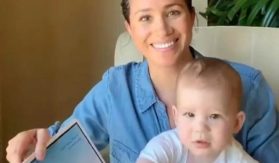 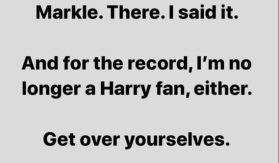 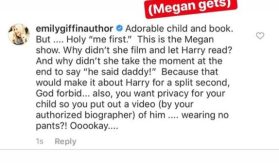 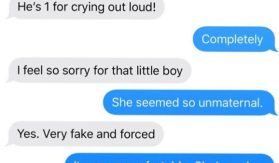 However, a portion of social media said, ENOUGH! As expected, after the news outlets picked up on Emily’s public spanking, she “apologized” with an explanation rather than sincere regret for her actions. I doubt, however, that Emily has learned anything other than being called out sucks. I doubt that Emily has seen the flawed logic that brought her to this point because she is the victim. I doubt that Emily will do better, if not for herself, for her readership because she has trained them to expect nothing higher than a trashcan personality. 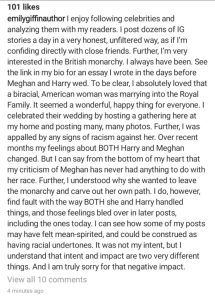 She has built this brand of what I deem spite and hate as her author-schtick to sell books and sell herself. I am reminded of the performing monkey banging the cymbals to keep readers’ attention between book releases. Compare the levels of professionalism among authors in her genre by looking at the top women’s fiction authors’ websites of Susan Mallery, Kristin Hannah, Colleen Hoover, Emma Straub, Barbara O’Neal, or Mary Kay Andrews and peruse their social media accounts. Pay attention to their brands and public persona. NONE prostitutes herself as an enemy of the very gender who defines her readers. By the way, Emily has made her Instagram account private so only like-minded toxicity can gain entry.

So, there is the possibility that the feminist who Emily is espousing to be is of an exclusive club. A positioning that is similar to the modern development of feminism during the American industrial period, from which the political breakthroughs benefited white, middle-class women. While later versions of feminism morphed and continued developing, the net was cast wider to include representation of women from various social-economic and racial groups. Still, the majority of feminist movements were under white women’s purview.

And now in current times, with the help of internet inroads to break down further barriers, there is no one group leading the way, defining the movement, acting as the gatekeeper. That’s a good thing. Just look at the data and polling of the U.S. and the U.K. of what conservative and liberal white women will campaign for and protect against, at times, to the disadvantage of marginalized segments of female space.

The ongoing climate drives home the point that inclusion and diverse voices continue to matter in the private, corporate, political, and yes, within kingdoms. Inclusion and diversity continue to need defending against sabotaging females who lack empathy and enjoy a homogenized, constrictive point of view. And we- as many as are up for the challenge as possible—must remain constantly vigilant against hate, discrimination, and terror tactics by the audaciously privileged.
By using the author brand and platform to support or declare someone “unmaternal” and “phony,” Emily Giffin has inserted herself in the tear down Meghan Markle project for entertainment value and personal satisfaction. She has boldly put her face, brand, and labor to joyfully perform character mutilation of a high-profile, female POC. Her rant could fit the theatrics of a hip-hop beef where one artist calls out the other for unresolved misgivings or for a showdown of dominance, but not really.

Emily is not Cardi, Nicki, Lil’ Kim. She has never met Meghan to even have a beef. There is no way, except in a delusionary state, that a battle with Meghan for the throne of being relevant, inspirational, and a visionary would occur. And, NO, having published books on a shelf, books-to-movie deal, nor a legal career do not earn a pat on the back for tearing down any woman/mother, but instead showcases entitlement and privilege to think it is okay to do so.

To push the point further, should she ask her readers if they or their children have ever been bullied or cyberbullied, or ever suffered the effects of discrimination (with no pre-empting), there surely would be many horrific and heartbreaking stories that eerily resemble her actions.
Is Emily woman enough to stand in front of the mirror, look her mean-girl, spirit animal in the eye, and redeem herself? That would take some soul searching that, so far from the weak apology, appears to be a feat beyond her ability.

I wanted to read Emily’s books to see if I could determine what made this woman tick. I filled up my Kindle with eBooks from the library. I wanted to read the stories displaying her passion to be a storyteller. Were her characters memorable and relatable? Did her themes speak of hope and joy and optimism? Alas, the public life of Emily was enough to make me know that I would bypass her books just like I would bypass dog poop on the sidewalk. I don’t have to step in it to know that it stinks because she (her personality, her choices, her actions) stinks. Emily Giffin can keep her brand of toxic feminism.

In closing, while Meghan was referring to gender equality, this quote has deeper resonance for women and their interactions with other women:

“Your confidence comes in knowing that a woman by your side, not behind you, is actually something you shouldn’t be threatened about but, opposed to that, you should feel really empowered in having that additional support that this is really about us working together.”

Meghan Markle, Her Royal Highness Duchess of Sussex, Countess of Dumbarton, Baroness Kilkeel shouldn’t trigger anyone to be spiteful because that manifestation says a lot about you, than about anything Meghan has done and will do on behalf of all women. If you are triggered by her existence, living, mothering and whatever else, then it’s time to mediate your internal battle, provoked by your insecurities, weaknesses…, fill in the blank. Dumping on Meghan will not heal or help your issues.
Do better. Be better.