At approximately 6:30 am (EST) on Saturday, August 10, 2019, the body of Jeffrey Epstein was found in his cell dead of an apparent suicide in a New York City detention center. Mr. Epstein was being held without bail pending trial on charges of sex trafficking underage girls. The news of his death quickly spread to national and international news outlets. However, due to the time zone difference, UK online media was already in print, so their audience were fed the daily dose of Duchess Meghan trolling. The following represent some of the headlines that appeared in UK tabloids on Saturday, August 10:

Mr Epstein, a multimillionaire financier, is known to have close association with HRH Prince Andrew, a member of the British Royal family. His untimely death is a travesty particularly for all his victims who were looking forward for their day in court.

One would think with the gravity of the charges, news of Mr. Epstein’s death would dominate the news outlets not only in the US but also in the UK for several days. But according to the Daily Mirror there was something more important than announcing the death of a vile sex trafficker who had close ties to a member of the Royal Family: The Duchess of Sussex. The daily dose of Meghan bashing was the front page of the Sunday Mirror. 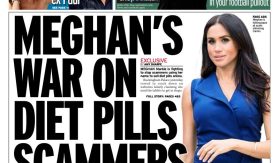 Some media outlets covered HRH Prince Andrew but not related to Jeffrey Epstein. He was photographed riding in the car with his mother HM and daughter going to church in Balmoral – all smiles and waves while that “Meghan Markle” is declaring war on diet pill scammers. The Duchess of Sussex is on maternity leave. She’s nursing a 3 month old baby. I am almost certain diet pills and diet pill scammers are the last thing on her mind.

British media. Royal Correspondents, social media trolls claim the Duchess is “irrelevant”, “uppity”, “attention seeking”, “social climber” etc. But a day doesn’t pass that they don’t write a story about her or post a negative comment. The question is if their disdain for the Duchess is so intent, why all the attention? The answer is plain and simple, Her Royal Highness, The Duchess of Sussex is their meal ticket. They know that stories (most of which are fabrications and can easily be disproved) about the Duchess sells. The Royal Correspondents and trolls are addicted. They must get that daily shot of hatred to ease the tension and make their day.

For those of you reading this article who believe the rubbish being spewed by the Royal Correspondents, may I suggest that before you pass judgement, do your own research. See what those who really know her and have known her before she met HRH Prince Harry and what they say about her: the head of her school, classmates, her friends from college days, fellow actors, and members of the World Vision team. Examine her accomplishments since becoming a Royal such as the Together cookbook, a collaborative project with the surviving women of the Grenfell Tower tragedy and the positive interactions with her patronages.

Ask them how their organization has been impacted by her influence. I only ask that you judge her fairly. Examine your motives for judging her, or should I say misjudging her, in some cases and then ask yourself is she being judged fairly. Many of the things she is criticized for mirror the actions of other Royal family members who somehow escape criticism. It’s called bias with leads me to believe it has a lot to do with her mixed heritage.

Members of the British media and Royal Reporters knew very little about the Duchess prior to her relationship with Prince Harry and has not made an honest effort to get to know her. They have relied on rumors and stories from paternal family members who haven’t had a relationship with the Duchess for most of her adolescent and adult life but will say anything to collect the money the British media is willing to pay, and they have paid handsome sums of money for falsehoods.

Trolls who are members of the British public believe their taxes fund her lifestyle and therefore this gives them the right to disrespect her and demand that she be at their beck and call. To all concerned: TAXPAYERS DO NOT FUND HER LIFESTYLE AND SHE IS NOT YOUR PERSONAL PROPERTY. The British media knows this but why educate their readers about the complex history of the relationship between the British Royal Family and the UK government when they can manipulate your mind with the click and bait stories, because click and bait stories make money.

The Duke and Duchess of Sussex have the right to demand their life outside of royal duties is private. We all want to be part of their life. Let’s face it, they’re new, different, and quite honest, refreshing. When they are performing their royal duties the cameras and reporters can follow them around and snap photos until their heart is content, and believe me they are ever present. But when it comes to their private lives, we don’t have a stake in that.

The mistruths, lies and vindictiveness against the Duke and Duchess of Sussex must stop. They are human beings who deserve our respect.

Finally, to the fans and supporters of the Duke and Duchess of Sussex, PLEASE STOP clicking on articles written by Royal Correspondents in the tabloids. Their articles disrespect the Royal couple. Your participation through clicking allows them to make money and that is the only thing they are care about.