The British Monarchy cannot demand or expect from the Sussexes, what they have failed or refused to give them. The irony of demanding loyalty from Prince Harry and Princess Meghan.

The British media’s (translate: royal establishment’s) constant irrational demand of loyalty from Prince Harry and Duchess Meghan to the royal family, but never from the royal family to Harry and Meghan is mind boggling. We know that beyond the British media’s relentless smear and propaganda campaign against Harry and Meghan, one of the main reasons they left their roles as taxpayer funded royals was lack of royal family support in the midst of an unprecedented media assault.

The silence by the institution even as many others acknowledge the blatantly over the top bullying tactics has been stunning and deafening.
Documents filed in court by Meghan’s lawyers in her copyright/privacy suit against Mail on Sunday confirmed the lack of support from the institution. She was bound by the hands and fed to the wolves. 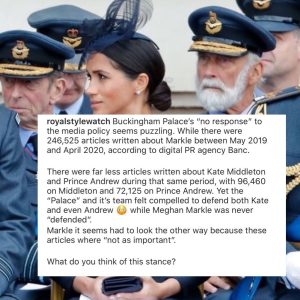 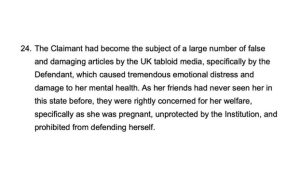 Meghan is suing the Mail On Sunday for misuse of private information, a breach of privacy, copyright infringement and breach of the General Data Protection Act.

Despite knowing the law and having been sued in the past by members of the British royal family for copyright infringement and lost, The Mail chose to illegally print Meghan’s handwritten letter to her dad, thus willfully exposed themselves to legal liability. 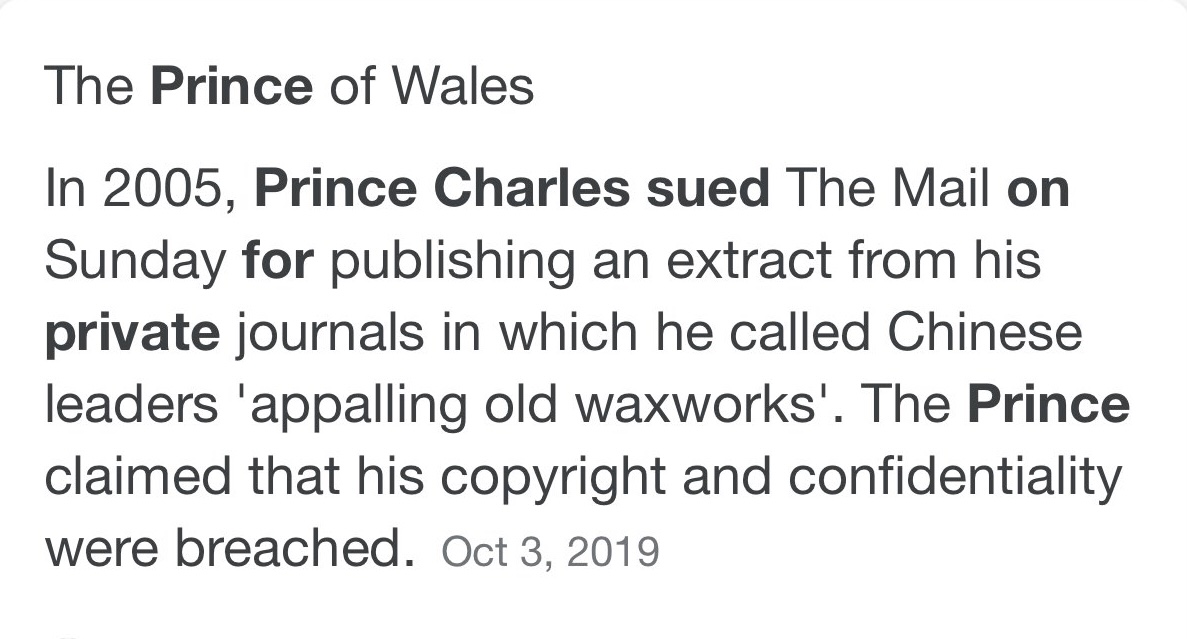 Meghan was 6 months pregnant when the Mail on Sunday chose to inflict this trauma on her and Harry. And the publisher spent the reminder of her pregnancy dehumanizing her and her unborn son. Was the intent to harass Meghan into a stress-induced miscarriage so they would have more stories to write?

It’s been over two weeks since the hearing for a summary judgement in the case took place so, a judgement is likely imminent.

Prior to the hearing, multiple articles published by the same British media who spent the last four years harassing Meghan, even while heavily pregnant and postpartum, claimed to be concerned for the traumatic experience a trial, as part of the next step in the lawsuit would inflict on Harry and Meghan.

The main point of the articles were to bully and blackmail Meghan into dropping her lawsuit because a trial would likely expose the operations of the monarchy, because courtiers and former staff would be required to provide witness testimony. Did Charles’ successful lawsuit against The Mail expose the operations of the institution and staff members?

Also, the articles alleged it could further harm her “vulnerable” father. Remember, the institution that remained silent and the father that not only didn’t protect, but demonstrably made Meghan’s life hell while she was pregnant. The faux concern for Meghan after all of the abuse is the most offensive to me and many who support the Sussexes. 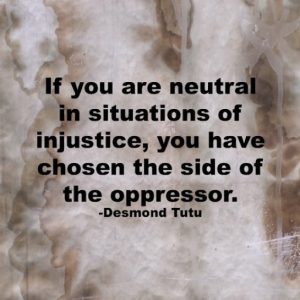 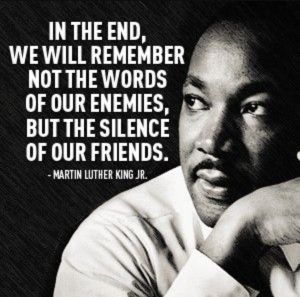 As it was revealed at the hearing, someone or a group of people high up in the royal family/palace was working with the associated newspapers to undermine Meghan’s case. The family that Meghan married into, or people who answer to them, are actively taking the side of her legal opponent. Yet we are told that they welcomed her, and the Queen claims they are still valued members of the family. They certainly have a nasty way of showing it.

The only reasonable explanation is that the Royal family has a real fear of what could further be revealed of their dealings with the media against the Sussexes, should the case proceed to trial. There is no other occasion where they have shown a genuine concern for her well-being in any material way. This “concern” is nothing but selfish.

As Prince Harry wrote in his October 2019 statement, they understand that suing the tabloids is not the easy way out( paraphrasing). A shrewd and intelligent pair like Harry and Meghan do not embark on such an action without thoroughly weighing its merits and demerits. In my view, Meghan is in it for the long haul. There is too much at stake.

Loyalty is a two-way street. Perhaps, the monarchy could have afforded Meghan and Archie the same humanity other members of the royal family enjoy by defending them from gratuitous racial abuse. It is truly ironic that the royal family wanted Meghan to protect the institution by dropping her case.

We would soon find out if the judge finds associated newspapers/Mail on Sunday guilty of copyright infringement, or whether the case will proceed to trial later this year. Whatever happens, all the evil-doers in that institution need to be exposed!
There will be a lot of noise, along with a bunch of dust being kicked up to distract us from the awfulness of the institution. There will be endless stories of how the Queen, or whoever else, is hurt or disappointed, and how the monarchy has been hurt. DO NOT FALL FOR IT. “Exclusives” of obscure made-up nonsense will come thick and fast. When that BS starts, remember all the instances the institution hung The Sussexes out to dry. Focus on that. There should be consequences.

Remember when they said Meghan made Kate cry but it was a big lie and they let a pregnant Meghan get an insane amount of hate for it? Remember the times Archie was likened to a chimpanzee in the British media but it wasn’t egregious enough to cause incandescent rage so the family stayed mum?

Remember when an erstwhile respectable BBC mainstreamed Meghan hate by depicting her as a knife-wielding trailer trash about to murder the wilting porcelain rose, but the family were quite chill about it unlike when they tried to strong arm BBC into investigating Martin Bashir, in order to compensate for their The Crown-induced Diana embarrassment? When I tell you these people are self-serving…

Remember when the family and their employees who answer to them signaled to the British media that it was open season and Meghan was fair game by leaking nasty nick-names they gave her: Degree wife, Me-gain, Duchess Difficult, Harry’s show girl, and all kinds of false “ Meghan is evil” stories and then turned around and said never complain, never explain?
Remember when for prioritizing the needs of his wife, Prince Harry’s own father called him “cunt struck”? Of-course Fred cannot comprehend. Or when British media via their “highly placed sources” harassed Harry and Meghan about security costs while dear granny whose life is not the same because Harry is not in London did and said exactly NOTHING, until she found her mojo to preserve the tax-payer funded security of her alleged pedophile FBI-evading son? Or when the press reported that William the mental Health “advocate” said Harry was mentally fragile after the Tom Bradby documentary of The Sussexes Southern Africa tour aired?

Don’t forget the time when the palace leaked to the press that Harry’s request to lay a wreath for remembrance day had been denied, initially covering dear granny’s fingerprints and then castigated Harry & Meghan for the cardinal sin of observing remembrance in at a Los Angeles cemetery. Then weeks later after the dust had settled, they ripped the scab off by going back to the media to say oh by the way, granny really was the one who pulled the plug! When I tell you these people specialize in a rare variety of meanness…

Never forget that. Or the fact that this far out, they’re still manufacturing outrage against Meghan by resurrecting an almost 2 year old incident. There is no reasonable or logical explanation for anyone to randomly be looking over the birth certificate of a minor child who is not theirs, well over a year and half after his birth, aside from a tip-off. The palace knew exactly what happened, but sat back and basked in the new round of Meghan Piñata-mania! Until Meghan corrected the record, and then came the palaces’101 versions of events rolling like movie credits.

The fact remains that Meghan has given only one account of the events whilst the palaces’ position has evolved from a clerical error, to a UK-US English language barrier(yes, really) to a possible suggestion from a guy in fancy dress to blaming a then non-existent PR team. You don’t have to be a genius to figure out who is fibbing. All the explanations put forth are as a cogent as a non-leaking sieve. The wretchedness of that move is quite scary, actually.

These people are not kind, or supportive, or welcoming. Forget loyal. At least not to Meghan or Harry. They eat their young.

Remember that, when the inevitable woe-is-me stories of the Monarchy’s peril at the hands of Meghan particularly, and Harry get resurrected. They are not worthy of compassion and deserve every ruin they have wrought by their own machinations.

The Extra Tidbit:
Could this be why the courtiers were panicking about the lawsuit against The Mail going to trial?

These two videos are one of closest things that we have that explains why the institution is panicking pic.twitter.com/NTlGHNlRTJ

I’m sharing an informative Twitter thread on how Prince Harry has consistently demonstrated support and loyalty to members of his birth family, who have not seen fit to publicly support his nuclear family.

Hey #sussexsquad we really need to make a thread of Harry’s work and achievements before and after Meghan, as well as videos where he talks about privacy, speaks up for Kate,etc because these derangers love to act as if Meghan changed Harry when that’s how he’s always been.

25 comments on “Loyalty Is A Two-Way Street: Meghan Cannot Squeeze Water Out Of A Stone”

Because Black Lives Do Not Matter To You