The Case Of Gary Janetti. In 2019, the Year of the Self-Serving, we will take a look at someone who’s sure to be a runner-up if not the winner of the 2019 Most Self-Serving Hypocrite award – Gary Janetti. Submitted for the judges’ approval is his statement about his main victim the Duchess of Sussex:

Fans of Gary Janetti’s popular royals’ parodies on Instagram may have noticed a tone shift in recent weeks: The TV writer’s take on Prince George has been more sympathetic to Meghan Markle amid heightened media scrutiny.

“I haven’t really watched [the ITV documentary], so I don’t really know that much about it, but I do know it feels like they’re having a rough go of it – I think that’s the gist”

Below are this hypocrite’s Instagram posts after the engagement of Prince Harry and Meghan Markle and after her first outing, post-engagement. 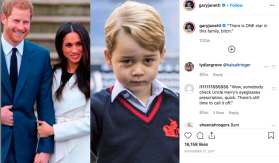 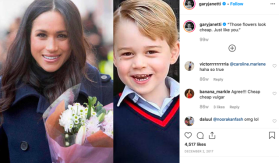 Are we to believe a man who gets his pictures for his Instagram (IG) post from the tabloids, was not aware of the stories and narrative surrounding the Duchess of Sussex? All through her pregnancy and maternity leave, the tabloids, daily (and sometimes even hourly), criticized, defamed and denigrated her for the most basic actions, from daring to cradle her growing stomach to the way she held her baby. Janetti cultivated a growing fanbase who took great delight in his alter ego’s mean-spirited remarks based on these same stories yet, now he feigns oblivion? How convenient is it that after two years of making denigrating remarks about the Duchess of Sussex, Janetti’s “awareness” that she was “having a rough go of it,” coincides with the publication of his book. A deal he probably got from his increased social media profile; an increase he owes to his skewering of the Duchess of Sussex.

No doubt Janetti is hoping his “awakening” will expand the audience for his book, beyond his IG commenters who find it hilarious that a grown man uses a child, as his alter ego, to make mean-spirited remarks about Duchess Meghan and others, and call it parody.

We could say that Duchess Meghan is not the only member of the Royal family that Janetti targets, after all he uses Prince George as his alter ego, but it is his ‘trolling’ of Duchess Meghan that gets Janetti the most attention from publications. 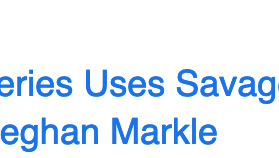 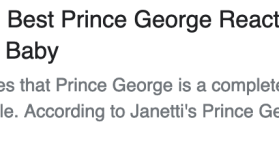 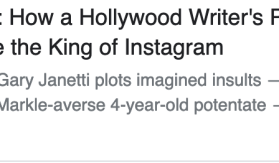 The trolls also flock to Janetti pages. The same people who take great pleasure in visiting Sussex Royal to express their hatred of Duchess Meghan and wish for her death also flock to Janetti’s page to worship his ‘wit’ and add their accord to the sentiments he expresses. In him, they feel they have found a kindred spirit; a surrogate who willingly propagates, on the world stage, their hatred of Duchess Meghan.

Gary Janetti’s IMDB page lists executive producer, writer & creator credits, but his bio reads more like that of a bit player than a showrunner. He still lives off the past glory of his executive producer stint on a top ten sitcom from more than a decade ago. What is giving him some semblance of relevance, if it can be so described, is his co-called “parody/satirical characterization of Prince George and the child’s imagined and often catty, response to various news and stories about Meghan Markle and other members of the royal family that has gained him international media attention.”
More accurately it’s the responses to the Duchess of Sussex that has brought the most interest and substantially increased his follower count. 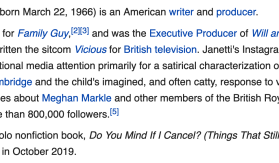 Janetti began his parody of Prince George, weeks before Prince Harry and Meghan Markle’s engagement, but it was the announcement of the engagement that gave Janetti the most attention. 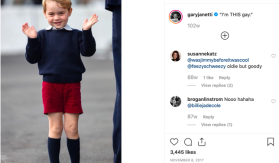 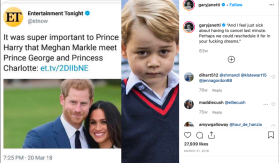 He became another (ungrateful) recipient of the “Meghan Effect” and the public’s insatiable appetite for all things Duchess Meghan. While supporters of the Duchess of Sussex far outnumber the dissenters, there is a dedicated virulent group who are insanely committed to telling the world about their hatred of the woman they feel does not belong in the royal family. Their numbers may be small but their vitriol is amplified by the toxicity of the British Media’s coverage of the Duchess.

The media’s attacks against the Duchess is coordinated and sustained; there seems to be no lie they will not print and no action they wouldn’t misconstrue to vilify her. The reporters openly interact with known trolls who belong to a hate group that has not met a virulent racist, sexist, xenophobic trope they will not use against the Duchess. They doctor videos and photographs to malign the Duchess and to them, Gary Janetti is a mere extension of their toxic sentiments. 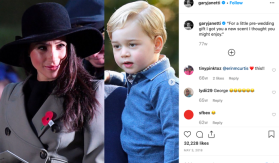 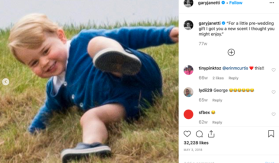 Their assumption is logical in that, during her pregnancy when the media increased their harassment and the haters questioned whether she was pregnant, and claimed her bump was a pillow, Janetti used it as fodder for his “parody”. When the media mocked Duchess Meghan for daring to cradle her growing belly, where previously they had swooned and waxed poetic when the Duchess of Cambridge cradled her stomach in public, Gary Janetti who claimed the ITV documentary made him realize Meghan was “having a rough go of it” joined in the harassment, by mocking her holding her stomach. 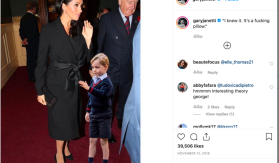 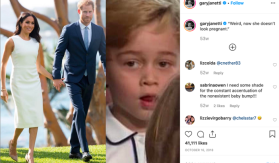 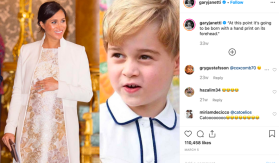 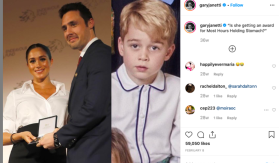 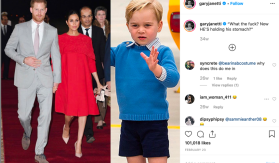 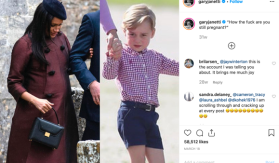 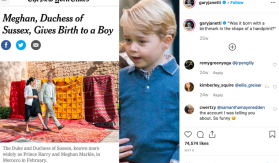 How was it parody when Janetti merely echoed the sentiments expressed daily by the media and social media trolls? There is nothing notable about questioning a woman’s pregnancy and implying that said woman is a fraud, but sheer cruelty. It is not funny, period. Janetti gained notoriety as some celebrities and racists flocked to his page, with his follower count growing as he joined in piling on the abuse directed at the Duchess of Sussex. If it was all fun and games, celebrities will not quickly remove their likes on his posts and offer mind twisting apologies on why they liked the posts in the first place. They all know this is beyond the pale, as does Janetti himself.

No topic was off limit and nothing seemed to give Janetti pause, at least not while his follower count was growing. Janetti knew what was happening to the Duchess and he knew what his role was in perpetuating the abuse but hey, there were posts to monetize and popularity to build. 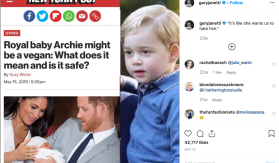 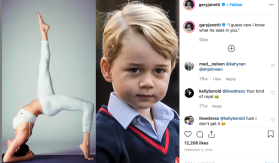 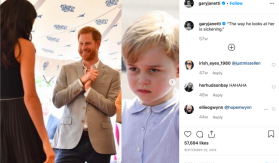 His conscience was on hiatus while he exploited the image of a child and pregnant woman of color. A woman of color whose presence offends the haters, who seem to want to keep their British royals white. She was being exploited by a man whose partner was allegedly subjected to bullying because of his perceived “difference” – his sexual orientation. That was wrong, and so is Janetti’s exploitation of Duchess Meghan. Rather than empathy for the Duchess of Sussex’s position, Janetti became another bully; condemning a pregnant woman of color being vilified for being different. No doubt he deemed money and fame a more compelling reason than common decency. Very disappointing for a person who should know how damaging bullying is, even if by proxy. 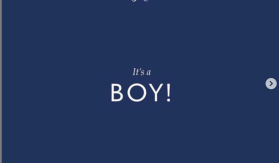 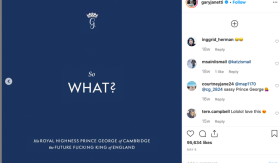 Proof of his concern for his bank balance is evidenced by his sudden and convenient attack of conscience about Duchess Meghan when it was time to sell books. Rather than apologize, Janetti left his options open by claiming he was only recently aware of her ‘suffering’ and would be easing up. Ever the opportunist should his book fail to achieve the glory he craves, I suspect Janetti may return to building his base by continuing to target Duchess Meghan. 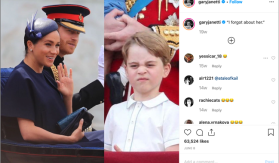 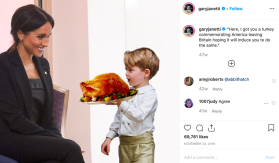 But we are onto you Janetti, we are familiar with your kind, people for whom others are currency to be “cashed in” as needed. So enough with the fake concern.
Apologize to Duchess Meghan, then say thank you for giving you the relevancy you crave. And while you’re enjoying your new found fame, know that we are watching you. More importantly, understand that ill-gotten gains will not prosper. Are you simply a small man so desperate for fame and fortune that you exploit the image of a child and pile on to the abuse of a woman of color by pretending to be ignorant of the negative impact of your bullying? or just another soulless carpetbagger who doesn’t give a damn about the victim of your bullying UNTIL it is convenient for you to appear reasonable and somewhat of a decent human, so as to market your wares?

To all the “celebs” who “love me some Gary” think of the mixed message you are sending as you step out to champion the end to bullying and the exploitation of women and children. Your endorsement of this despicable platform makes you just as hypocritical as the half-wit, expressing ‘concern’ only when you want to cash in your social activism credit. When you’ve paused from your laughter, ask yourself how you would feel if it were your child’s image that Janetti was using for fame and fortune or cruelly exploiting you, your spouse or relative.

If one was ever in doubt of what a hypocritical opportunist looks like, look no further than Janetti. Now that his book has been released, the book tour over and follower count stagnant, his “concern” has predictably faded. He’s back to his usual fare of mocking the Duchess. 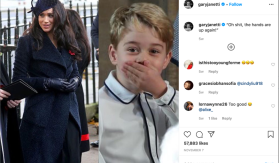 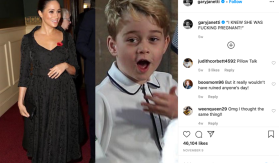 Gary Janetti may think he’s played a smooth game but in reality, he’s played himself. He will forever be that creepy guy who but for the mere existence of Duchess Meghan in the British Royal family, would be a forgotten relic of yesteryear. We all know that, and I have a sneaking suspicion that Mr. Janetti knows he’s a bonafide clout chaser. Take a bow.

And I still remember how Camilla Tominey tried to smear #Grenfell survivors with terrorism by using a man who got kicked out of Twitter for racially abusing Marcus Rashford as a ‘source’.

If you get a chance, we urge you to report this racist account targeting Meghan and AAs killed by racist cops. Please report! -M

Duchess Meghan on how she paid for her studies

Meghan Markle And The Elephant In The Room