About That Specific Press Pack. When Prince Harry announced that his wife was filing a lawsuit against the Mail on Sunday and its parent company Associated Newspapers, he mentioned that this action had been months in the making – months during which we witnessed the ruthless campaign that had been waged against the Duchess of Sussex by specific sections of the British Press. They do this by publishing false stories intended to paint the Duchess in the most negative light and by creating narratives which they perpetuate with the help of TV hosts, “Royal experts” and commentators who push these over and over again on mainstream media channels as well as social media.

Many of the people involved in this ruthless campaign have defended their work as being truthful and fair. They claim that their stories are factual, they have been properly sourced and that any criticism has been consistent with holding the Duke and Duchess of Sussex accountable as members of the Royal Family or any other public servant who receives public funding.

As a supporter of the Duke and Duchess of Sussex, I can attest to the various attempts that have been made to engage with the reporters and opinion columnists; to appeal to them, to correct them, to call them out in the hope that they would pause and reflect on what they were doing and the impact that it may have on the Duchess of Sussex especially during her pregnancy.

They often say in defence of their work, that what they write is in the interest of the public. It’s my humble view that this very same public need to know who is bringing them the news/information on the Duchess of Sussex. The public as consumers should be in a position to snuff out bogus reporting from truthful stories so as not to be misled. This piece is just one tool that will empower readers to do so.

In the interest of clarity let me reiterate that, the purpose of this piece is to highlight how and when these members of the media have failed to uphold the principles of a free and fair press viz truthfulness, accuracy, objectivity, impartiality, fairness and public accountability in the acquisition of newsworthy information and its subsequent dissemination to the public. It is not a witch-hunt and the intention is not to direct any hate towards these people. It is just an exercise in transparency, in an environment where facts seem increasingly pliable rather than verifiable. 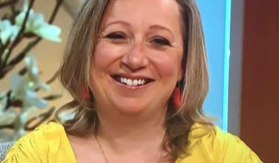 She works for the Sun newspaper and that should give you an insight into the standard and quality of her reporting. Her inclination is to peddle Royal gossip taking pride in bringing “exclusive” stories to her readers with claims to having good sources within the palace. Emily put out an exclusive story in which she revealed the location of the Duke and Duchess’s Cotswolds country home, a home they were forced to leave when their security was compromised following an incident in which Splash, a paparazzi agency flew a helicopter over the house and took pictures with a drone, which were later published by other media outlets. When the couple terminated their lease early as a result of the security breach, she reported that they moved because they could not afford that place as well as furnishing their newly renovated Frogmore cottage residence. Dishonest.

Perhaps what Emily is best known for is the number of lies that she has printed. She published a story about Meghan’s baby shower complete with names of attendees, decoration details, games played and gifts unwrapped, a full day before the event had happened. Another time she claimed that the Duchess’s friend Priyanka Chopra had paid her visit following the birth of her son complete with details of the gifts that were received. Only for Priyanka to post a denial via her Twitter account. 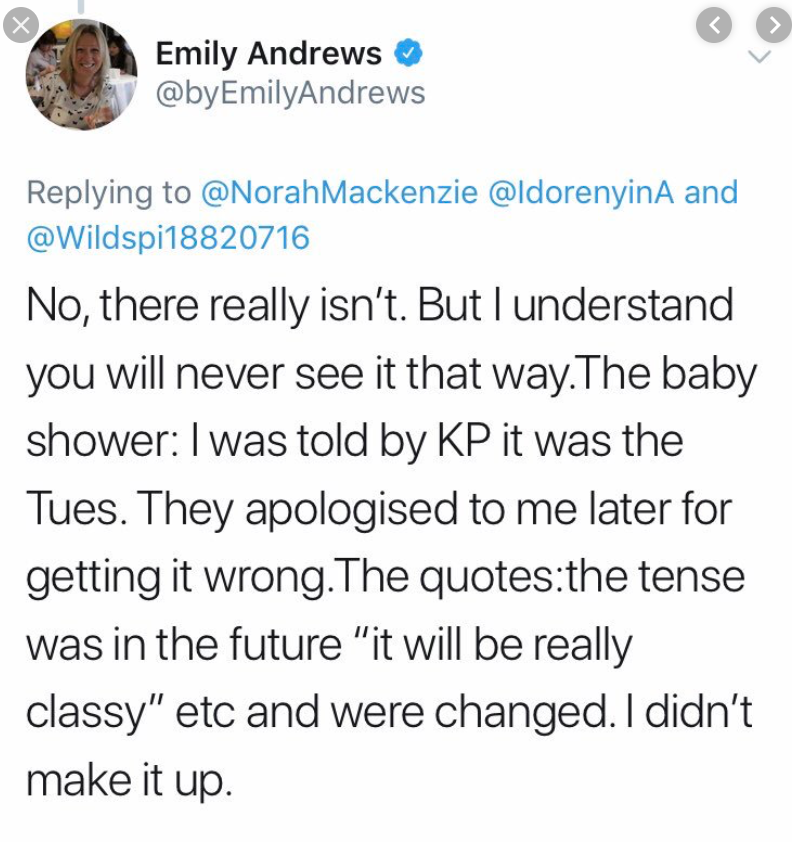 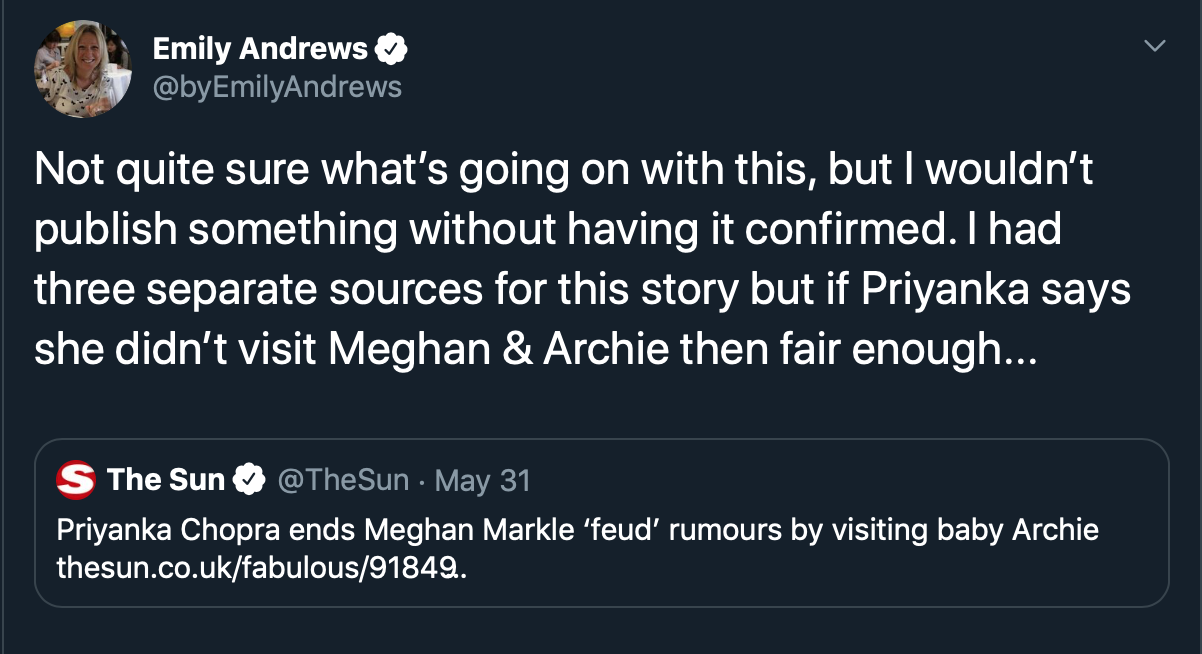 The few times she has written exclusives, it later turns out that this information was in the process of being released and she jumped the gun and released the information hours earlier than it was intended. She was the one behind the a story claiming that Meghan and harry had handed out rules to their new neighbours in Windsor, and went ahead in spite of a palace denial to publish a story entitled “The MEG-Commandments” which of course turned out to be a hoax. Each time she was caught up in her tabloid lies, rather than acknowledge her error and offer a correction she blames palace aides.

We all know that some times reporters get things wrong and in other cases they print out right lies. The problem in this case,without the correction, these lies are picked up by her colleagues, amplified and used as a weapon to attack the Duchess of Sussex. The costs of Meghan’s baby shower were grossly exaggerated thanks to her which led to never ending commentary berating the Duchess for extravagance and showing off. Camilla Tominey and Sally Long used the MEG-Commandments to advance a narrative that the Duchess is a diva. 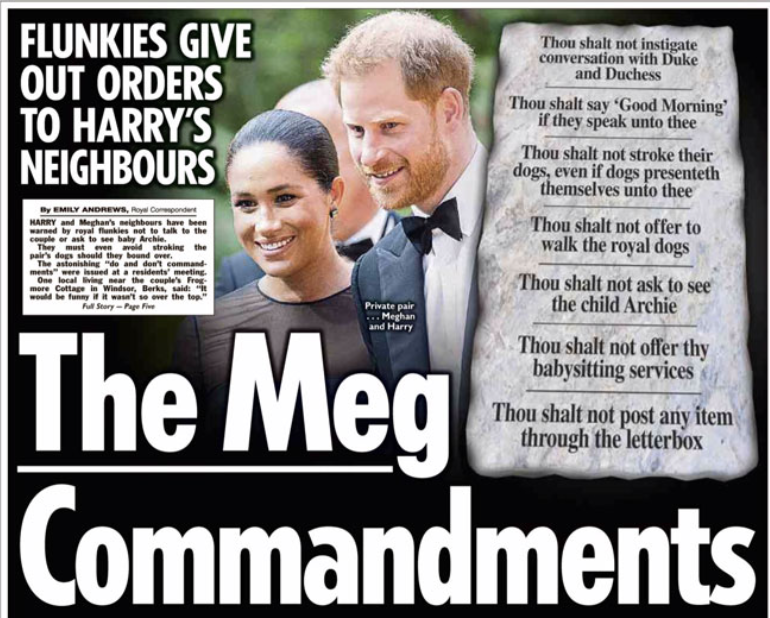 As we have seen with the Sussexes having to prematurely vacate their residence, there are consequences for reckless reporting and spreading lies. It compromises security and puts people’s lives in danger. Lies specifically misrepresent who a person is, the way they are perceived and encourage others to not only judge you but also stir up negativity and direct hate towards the victim. 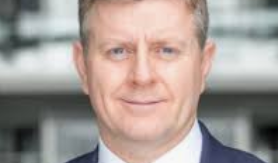 Chris Ship is a Royal correspondent for ITV News, having previously worked as a senior political correspondent for ITN. Based on this you would expect that he is capable of sourcing and presenting well researched and properly nuanced news stories, which he does but this is reserved for reporting on the Duke and Duchess of Sussex. One case in point is his reporting on the private jet saga over the summer. Chris went as far as doing carbon emissions calculations and interviewing an executive from a private jet company who went on record to question the validity of carbon neutral programs. In presenting this, what Chris left out is the circumstances under which private jet travel is the preferred mode of travel as is the case when Prince Charles or William use the Royal Air Force Voyager when they go on tour.

To further demonstrate the extent to which Chris applies his journalistic skills only where the Sussexes are concerned, let’s take a look at the two tweets below. 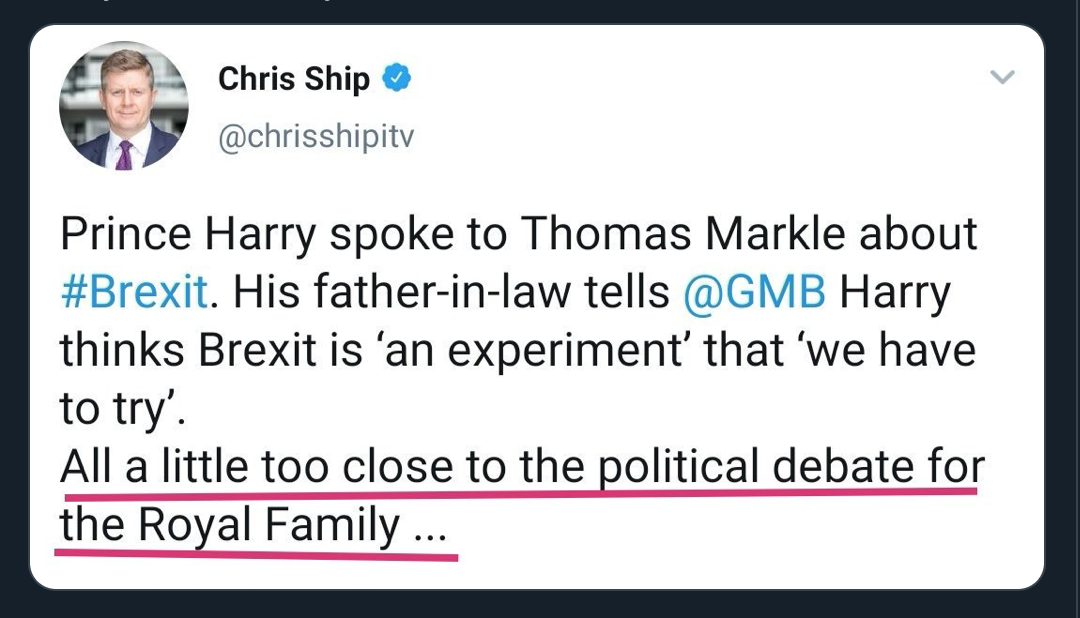 Royals are expected to be “apolitical” and that implies that publicly they avoid making politically inclined statements. When Piers Morgan asked Thomas Markle for Prince Harry’s view on Brexit, Chris commented that it was “too close to the political debate”. Bear in mind that this is second hand information about Prince Harry’s view from a man who has an axe to grind with his son-in-law. However when Prince William asks farmers in Lake District about their Brexit concerns, he offers no comment and sticks with the script verbatim.

The level of scrutiny that he will apply to news stories is reserved for the Duke and Duchess of Success. In the case of the Duchess it is a reminder of the level of scrutiny women of colour are subjected to when they are within typically white spaces. There is no room for mistakes lest your “sins”, which could be very much similar to those of your white peers, are judged to be immensely worse. As your motives and character are continually questioned, each decision you make is questioned; every manner of criticism is thrown at you as a person of colour you are expected to take it. Something Duchess Meghan has done with unbelievable dignity.

Chris displays a degree of journalism and level headedness that convinces many followers of the Duke and Duchess of Sussex that they can trust his reporting and reason with him. Whenever he is exposed for the double standards he displays in his reporting across Royal stories, his response is to pretend to not see it or resort to gaslight his readers. His failure to be fair and consistent misleads the public into believing that the Duchess of Sussex is in one way or another doing things that other members of the royal family are not doing.