After the Palace and the British Monarchy decided they couldn’t accept Prince Harry and his Wife Duchess Meghan’s proposal for a different working module for them under the Royal Institution, and with them having stepped down, I thought the media’s interest in them would die down. Afterall, they are no longer being funded by the British taxpayers, are living in the United States of America, charting their own path and have severed all remaining financial ties with both the institution of the monarchy and the public purse.

Unfortunately, the smearing of Meghan and increasingly Harry, continues unabated. The same old stories are being regurgitated by Royal Reporters and TV “Body Language Experts”. One such Body Language Expert even alluded that Prince Harry looked like he had been taken hostage by his wife Meghan, when they both participated in a zoom discussion with some young people from the Commonwealth Trust.

Another claims that, Meghan “showed signs of anger” when she was interviewed during the Forbes most powerful women virtual summit. Perhaps when a rent-a-quote body language expert with a below-basement track record is called upon, and the discourse is at such a high level that she’s are out of her depth, then she just makes sh!t up. The same expert who read “trouble in paradise” all while Henry Windsor was busy sourcing a conflict-free engagement diamond from Botswana. Really, who is paying for this rubbish? Its royal media so I guess it means we should have no expectation of standards.

Even though there is a treasure trove of documented information about Meghan’s pre-royal career, the British media’s campaign to dismiss Meghan’s remarkable attributes pre marriage to Prince Harry is now in overdrive. Gullible people continue to feed on programmes such as Good Morning Britain, Loose Women, and several other “royal “ news programmes. They go to extreme and ridiculous ends to in their attempts to minimize Meghan. E.g. In an episode “The Royal Beat”, when a guest remarked that, Meghan is the most photographed woman/ one whose photograph is most sought after in the world, the man who would know –Dan Wootton– said that it is actually Madonna and Britney Spears, not Meghan.

That is how far back they are going to fall to denigrate Meghan. Laughable isn’t it? I get it, the royal world they are accustomed to is akin to navigating a pre-historic museum, but come on! Even if she is not the most photographed woman in the world, Meghan is the most talked about woman in the world. For them, it is a do or die situation and they are not prepared to admit defeat. Meghan and Harry are living their best unrestricted life, but the royals and their media mouthpieces cannot accept or acknowledge it. In place of facing the brutal truth, they will continue to litter and clutter our senses with nonsense stories.

This week our media space was polluted by the rubbish opinion of yet another dubious character. In a world where accused and law-evading paedophiles, philandering spouses and back-stabbers are embraced, and even protected, it is not surprising that the drunken, wife beating, alleged drug-dealing uncle of a desperately mediocre duchess, is considered by the royal spin machine to be a character witness. One who is worthy to express an opinion about Harry and Meghan. The desperation is real when you literally have to reach down to the bottom of the barrel to make an ineffectual point. 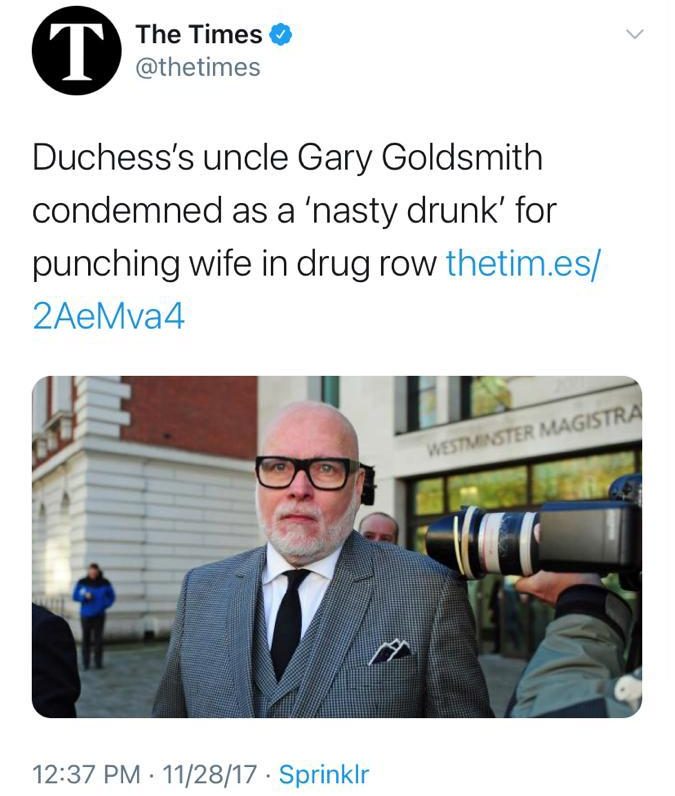 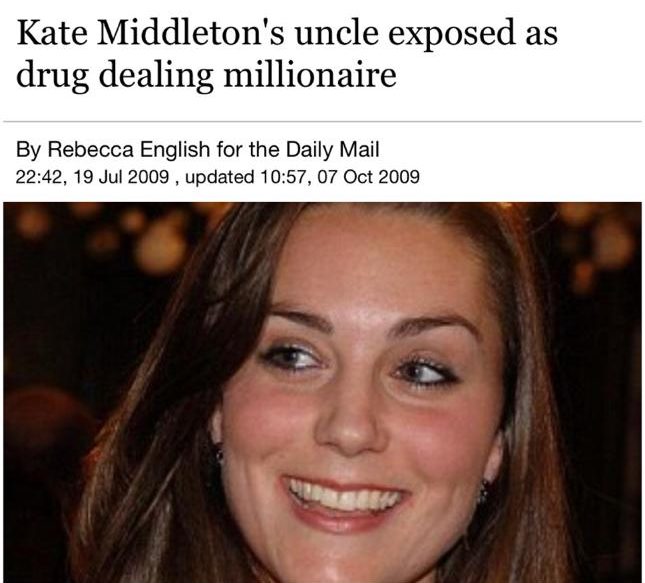 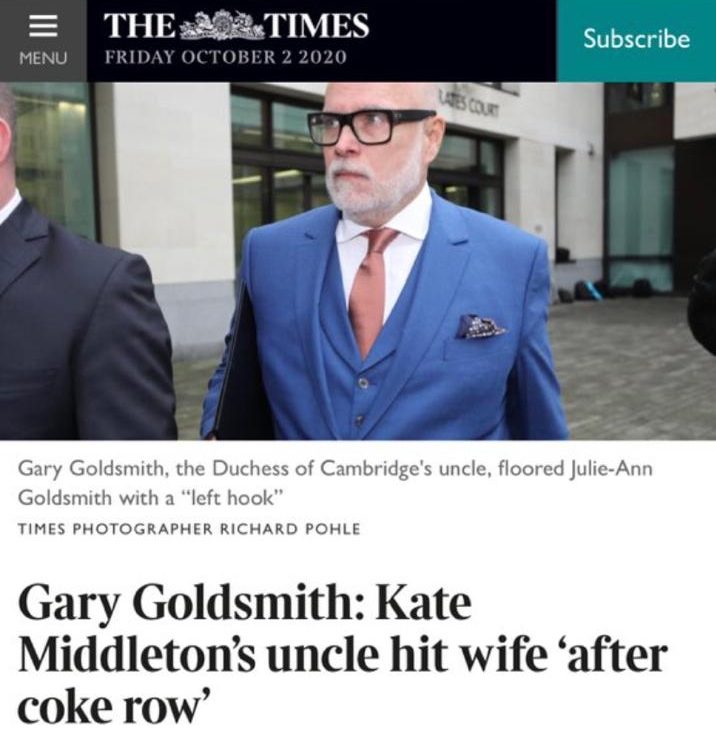 Meghan has been accused of a thousand sins. The world is battling a pandemic and Britain appears doomed to Brexit hell, but the British Media choose to prioritise daily reporting on her. It’s almost as if she is the relevant royal, but what do I know?
A few thoughts about the Meghan “sins”. Consider the non-exhaustive list below.

Assuming everything written about her were true, why does the media who loathe her so much report on her daily? If she is “irrelevant” why is there still an agenda to disparage her? Shouldn’t she be an afterthought? The loathing the media have for her should be enough for them not to want to cover anything she does right? Wrong….

Sky News interrupted their scheduled programme to broadcast Meghan giving a speech to online participants of the UN “Girls Up” programme. Meghan is no longer a working Royal, and yet her speech was “BREAKING NEWS”. Everything she and Harry do, is major news in the UK. Almost as if there wasn’t a whole reigning monarch and fading line of heirs awaiting her passing.

The British Media, from the onset, had their agenda on how to “deal with Meghan and put her in her place”. This is evident from the coverage she received. They always fall back the Meghan is an actress “therefore she is always acting” trope. Yes, she is an actress, that is what she trained for as a profession. Whilst other actors are praised and given Oscars and other prestigious awards for their craft, Meghan is torn down for choosing that profession. They just cannot concede that the is a confident, eloquent and engaging speaker, whether scripted or off-the-cuff.

We’ve all seen actors flub their acceptance speeches at award shows, but it hasn’t yet clicked to these folks apparently. However, when Meghan gives a speech, she is deemed a fake and a performer. Has it occurred to these dumb people that to be an actress, one has scripts to memorise? That one actually needs a sharp brain and a level of intellect to be able to study and embody a character? These are the same people who call Meghan a failed actress but somehow, the perceived failure and her her alleged poor stagecraft has equipped her to be a good speechmaker? That is some wild failure electronics! 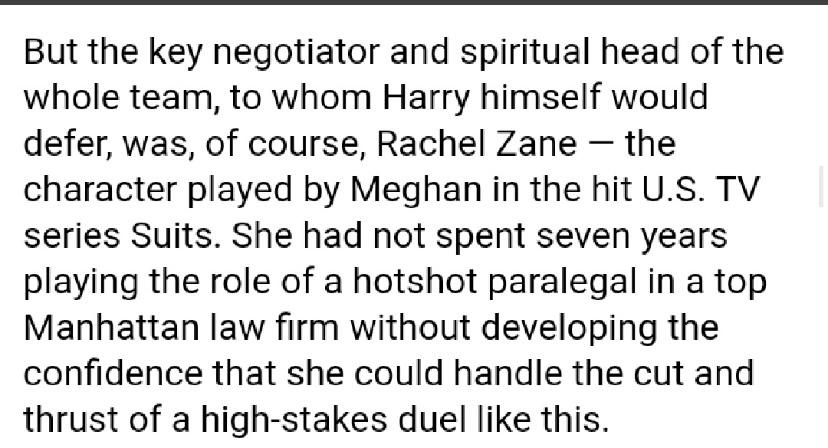 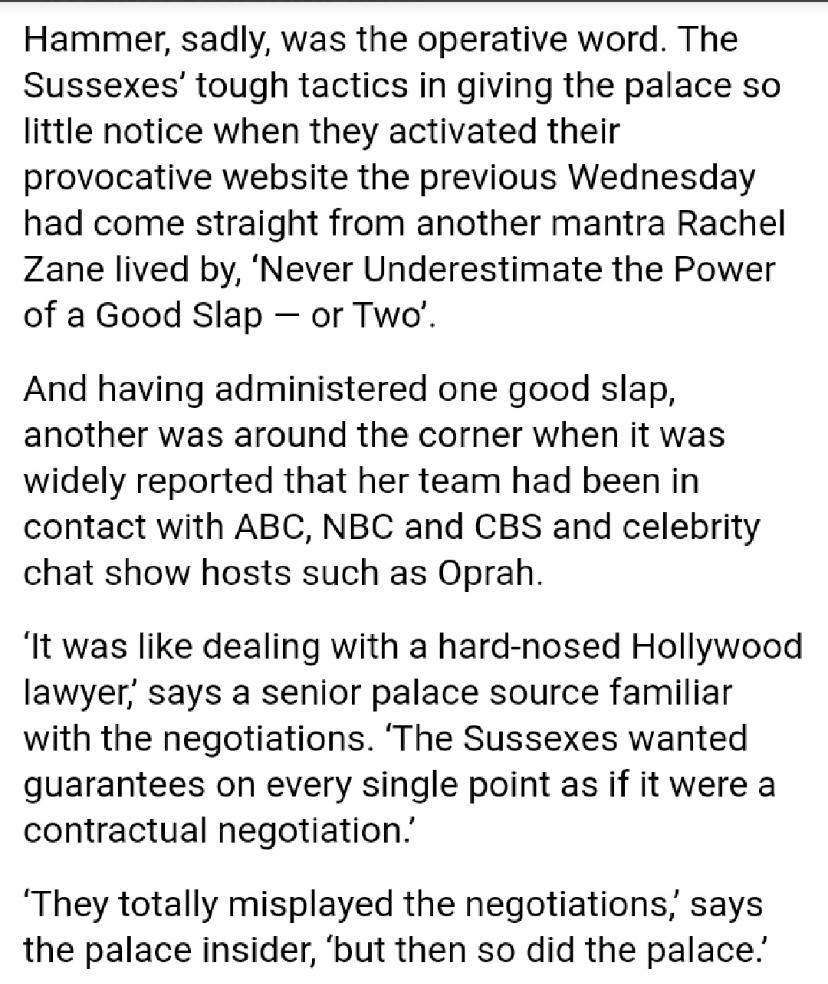 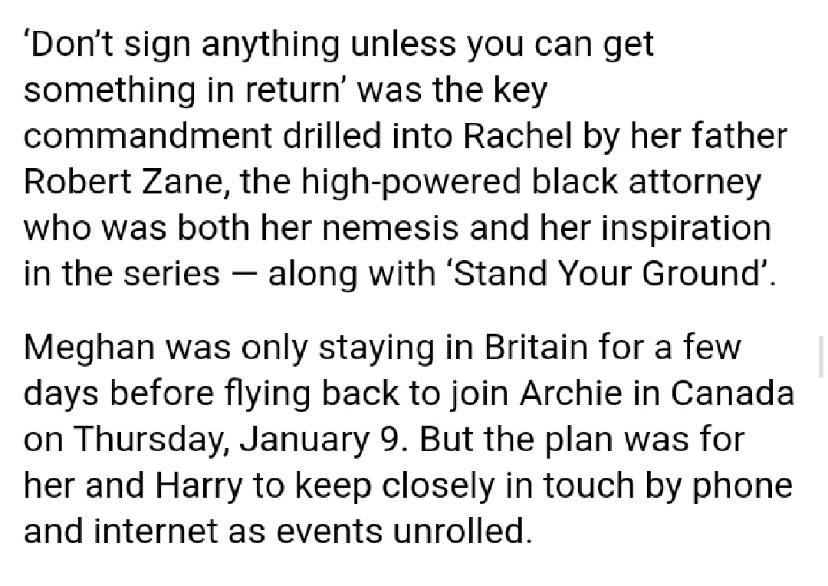 Excerpts from yet another royal biography has really tapped into the “failed actress juju” to ascribe Meghan some legendary litigative chops. According to the author, Rachel Zane herself presided over the Sandringham negotiations. Talk about bonkers! Maybe the royal enterprise of Kate the great should enroll the possible future queen in acting classes because, those elocution and speech lessons are not doing the trick. It’s all a load of crap, and they know it. You and I know that, the possible future queen would already be in theatre school if that was the ticket, because they copy everything.

But they really don’t need acting lessons do they? I would say that the Royal family are the real actors. The have perfected the act of appearances. They outwardly acted as if they welcomed Meghan, while behind the scenes, they engaged a thousand-man army and dressmaker, to make her life a living hell. They publicly act tongue-tied when she and her son are derided with racial epithets, but behind the scenes they let it rip and their gossipy and undisciplined old men spill the beans.

They outwardly pretend to love the sixth in line, but behind closed doors the plot daily on what part of his humanity will be placed on the family alter next. They mostly(save Prince Charles) have perfected the act of working, while actually producing nothing.

They’ve honed the act of being perceived as frugal, while actually living high on the public hog. They act apolitical for public viewing, but behind the scenes, there are palace letters, black spider letters and a revolving door between palace and government. 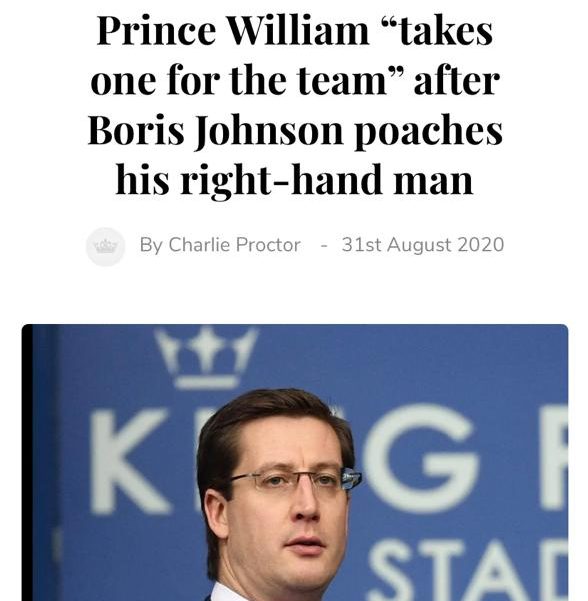 Their plastic smiles at Harry and Meghan’s wedding and in Archie’s christening photos were all just to make the Royals look good. It was a stage set up to be used against her. It was to make the media’s faux outrage seem plausible to the gullible public whenever the media peddled their ridiculous stories.

Prince William and Kate couldn’t keep up with their façade and pretence any longer during the Commonwealth Celebration when they totally ignored Prince Harry and Meghan for the whole world to see. There wasn’t any backlash about their behaviour and yet stories that were printed about Meghan three years ago are still doing the rounds on a daily basis.

Once again, the media upped the ante and got their knickers in a royal twist because of the book “Finding Freedom” by Omid Scobie and Carolyn Durand. This is a biography from both writer’s own observations as royal reporters. I should add that in a recent court proceeding, Meghan’s lawyers categorically denied that she cooperated with the authors, challenging the veracity of several accounts.

Several unauthorized biographies of Meghan and Harry have been written, a lot of them by people who have never even been in the same space as The Sussexes (including our Suits-obsessed author), but because they tow the company line, no fuss is made about it. Rather, they are elevated as credible and given airtime to propagate their message. Madness really, if you think about it.

Now, they are upset that The Sussexes own a stunning piece of property in sunny California, and are embarking on lucrative business ventures and continuing to advocate for the social issues they care about. I will never understand the devotion and investment of the BM and their online trolls in the nitty gritty of the lives of two people they claim to dislike and are happy to be rid of. The negative wheel continues to roll and I hope and pray The Sussexes continue to remain poised, dignified, resolute and unbowed, and supported by Sussex Squad, for however long it takes.

I would like to congratulate all ‘Squaddies’ for your continued support and receipts to counter the media’s negative reporting. We have been loud and unwavering. Some people choose to call us trolls etc.. our impact has been felt and heard. They seek to knock us off our game by distracting us with stupid click bait. They would have us expend our energy on nonsensical stuff rather than focusing on and promoting the cause-driven and impactful work the Harry and Meghan are doing. They depend on us for engagement, so that they can get paid.

The success of the various Squad-driven initiatives shows us that we have the power to amplify and propagate a message. It is why the media have targeted individual members and it is why they are perpetually lurking in our social media threads, trying to harvest posts that they can manipulate into a negative media story. I hope we use this power judiciously in our fight to defend the Sussexes. We are on the right side of history.