Irresponsible reporters continue to slander and threaten the Duchess of Sussex with intentions to harm her mentally and physically. The latest attack is the fabricated story by Sally Jones, a British journalist, television newscaster, and sports presenter. Despite her notable sports accolades, she reduces herself to join a group of mudslingers to help disparage Duchess Meghan. The reporters play a dangerous game with the Duchess’s life while they try to deflect attention away from the real headline of the day: The Jeffrey Epstein Child Abuse Case.

Meanwhile, Meghan, the Duchess of Sussex, continues to be the scapegoat for the outright xenophobic and misogynistic behavior from the angry press who have gone rogue. The group drives a negative smear campaign with the intent to kill her spirit.

Ms. Jones made a drive-by stop appearing on GMB and other news outlets, including writing an article for the U.K. Daily Mail on July 9, 2019. In the article, she accuses the Duchess Meghan of being a diva who waves away cameras and people via security (at the Wimbledon tennis match on July 6). Also, according to her Daily Mail article, Ms. Jones states that the security officer asked some people to put away their phones. She makes clear that she was taking pictures of Serena Williams, not the Duchess. Jones’s own phone story may be true, but she cannot back up her claim about a fan taking a selfie approximately one foot away from the Duchess.

The photograph in the U.K. Daily Mail illustrates how the fan aims the camera close to Duchess Meghan’s face. With constant death threats and outright lies against the Duchess daily, it should be no surprise to anyone that her team takes extra precaution—especially during the British media’s smear campaign against Duchess Meghan. The security team is efficient and must do the job. Therefore, the made-up story is an opportunity for Sally Jones to jump on the bandwagon and make money off Duchess Meghan’s back—show us the selfie! 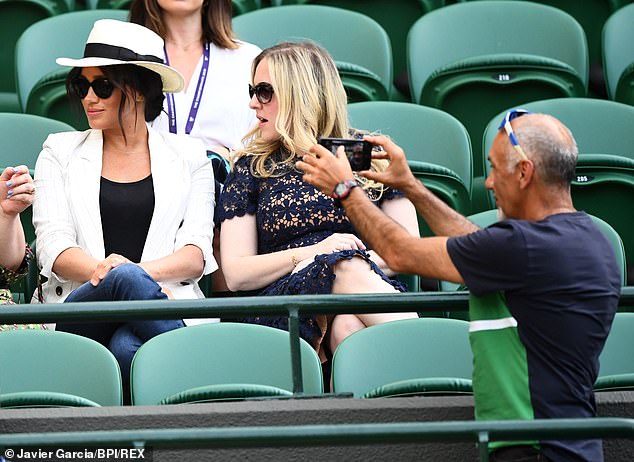 In another lane, some self-appointed experts on mothering critic the Duchess’s handling of Master Archie at the Polo charity event. Some did not like the way that she held her baby. However, all bets are on that the same “parent shamers” refuse to utter Jeffrey Epstein’s name. Royal watchers, ruthless reporters, and “parent shamers” refuse to follow reports about the Epstein investigation, which is covered by most media outlets around the world. The irony is that Epstein is the link to an alleged child abuse story with someone in the Royal family.

On the other hand, many royal reporters still have a determination to wage war against Duchess Meghan, and their strategy is to hurt Prince Harry. All the drama is because the press demands power over the royals’ lives. They want to gain access to their privacy, pretending they are not human. Their next step is to harass Master Archie because many reporters have no boundaries and appear to be oblivious to child abuse.

The constant narrative that the Sussexes want privacy, but taxpayers own them is the most dangerous game reporters and commentators are playing so far. They complain that Duchess Meghan breaks royal protocol; however, the complainers (reporters) have no rulebook at all that they follow and will stop at nothing until it is too late. Soon people will become desensitized to their bald face lies and stop supporting their hate-filled columns. Not only Britain citizens, but the world is watching the British media.

Meanwhile, the world concerns itself with front page news. The New York Times article on July 11, 2019, shows a timeline that reports the sex-trafficking charges filed against Jeffrey Epstein. Noteworthy is the 2015 defamation lawsuit against Jeffrey Epstein that involves Britain’s, Prince Andrew. One of Epstein’s accusers, Virginia Roberts Giuffre, alleges that she was seventeen when Epstein paid her to have sex with Prince Andrew, the Duke of York— both Epstein and Prince Andrew deny the allegations.

Nevertheless, many anti-Meghan media outlets persist and rev up their engine heads and conjure imaginary stories about the Duchess’s clothes, parenting, and body language—anything but her charity work. Meghan, the Duchess of Sussex, proves her humanitarian work one-hundred percent since the age of 11. The group of rogue reporters now try to block money from charities that the Sussexes support. Rogue reporters do not care about helping people in need; they only want to line their pockets with money. Rogue reporters want to hurt the people living in the Commonwealth countries who see them for what they are: a hindrance.