On Saturday, July 27th The Sun published a Story written by Emily Andrews with the following headline:

FLUNKIES GIVE OUT ORDERS TO HARRY’S NEIGHBOURS – The Meg Commandments

Listed on a faux stone tablet background and written in a style similar to the commandments in the Holy Bible were the Royals’ commandments. As with the majority of articles about the Sussexes, and particularly the Duchess of Sussex, this article should never have been written or at least should have led with a headline of the Buckingham Palace denial, which the writer, Emily Andrews, placed at the end of the article. 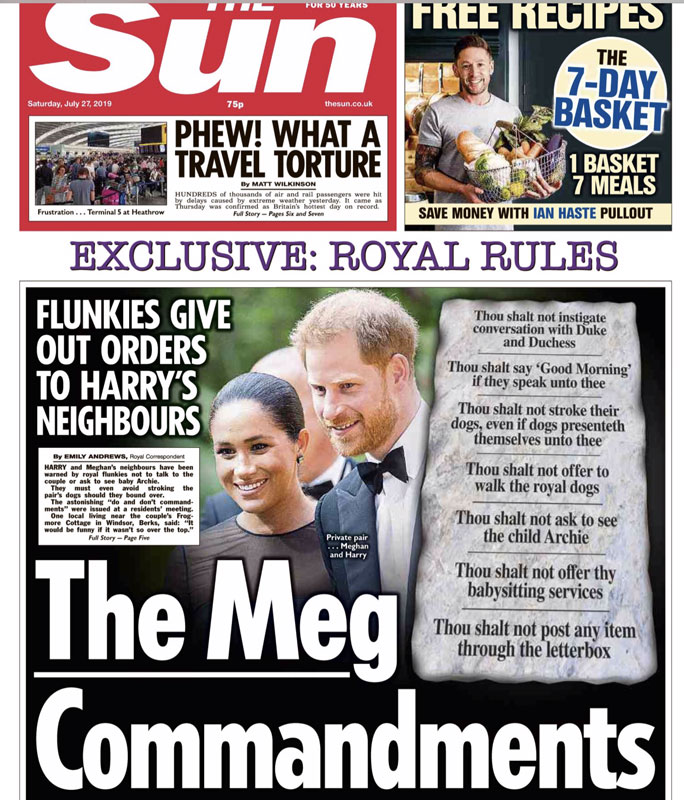 When the rumor began spreading that the Duchess of Cambridge received botox treatments, the palace quickly issued a rebuttal. International publications were satisfied with a simple headline as follows: “Palace Denies Kate Had Baby Botox.” Days before this story was published, instead of being first, UK tabloids were the last to publish a story about the Duchess of Cambridge. The Sun made its bias quite clear with the headline: “FROWN ON Palace furiously denies ‘untrue’ claims Kate Middleton got ‘baby Botox’ after plastic surgeon posts alleged ‘before and after ‘photos on Instagram.” 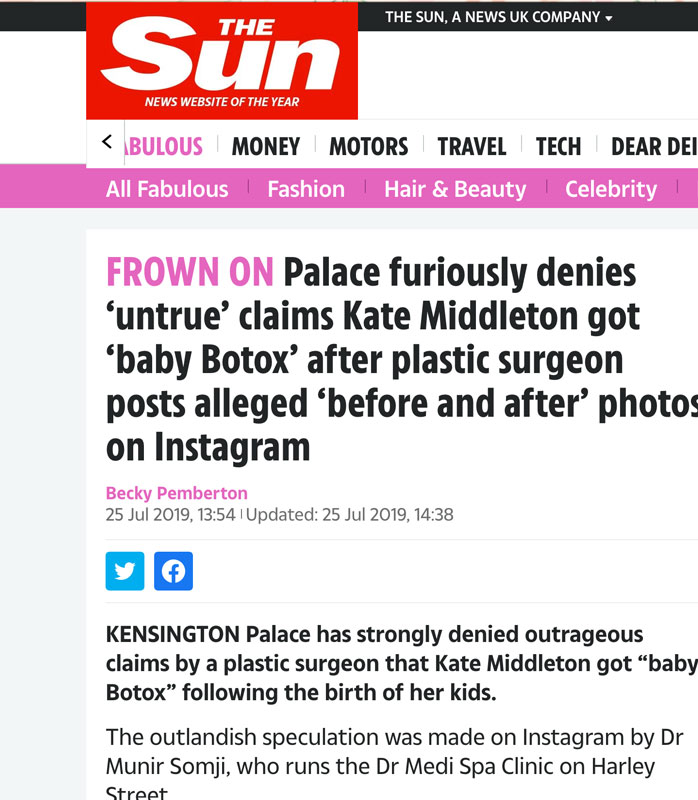 As we see with the Cambridge story, the palace response can influence the tone of the story, but as is their practice, The Sun did not extend that courtesy to the Sussex story. Not only was the palace denial not mentioned in The Sun headline, it was buried at the end of the article. As always, the tabloid was counting on people not reading beyond the headline, because quite honestly and based on the response comments many don’t read beyond the headline.
The palace response denied the claim and the article offered nothing to refute the denial.

Recently another tweet shared that Private Eye revealed the piece written by Emily Andrews concerning the “commandments” was a joke which was written by a resident and everyone who saw it knew it was false. In reading the article we can infer that The Sun was also aware the story was false, since all they offer as proof are a few soundbites with no context and a royal expert’s opinion on the reason why such action would be taken, if the situation actually occurred. Of course, as with the majority of stories about the Duchess of Sussex, there is proof that the tabloids will present a made-up article as fact. Case in point, Emily Andrew’s story about the baby shower that was published the day before the shower took place. 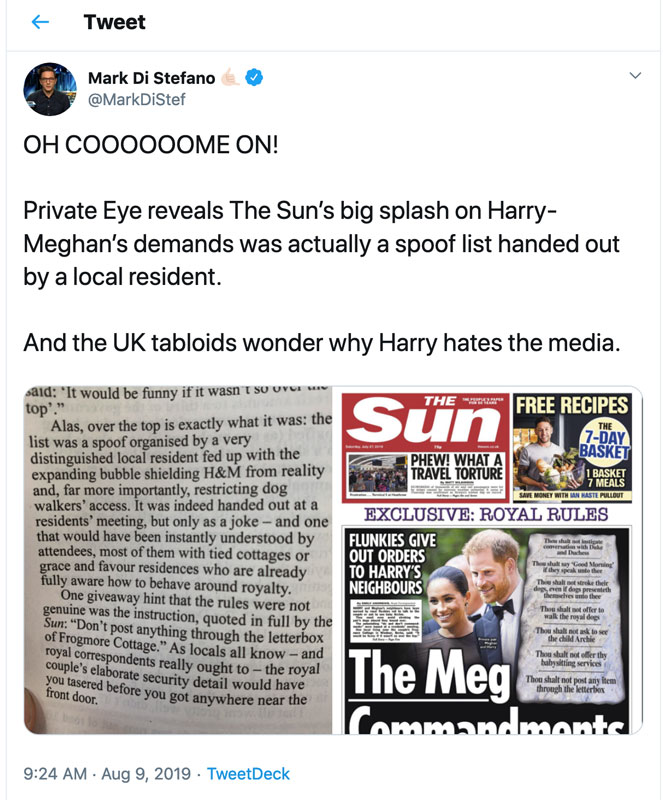 The commandments were ridiculous and not worthy of consideration by anyone with an ounce of sense. Should one feel inclined to read them, you need look no further than the last ‘commandment’ to spot the discrepancy; “Thou shalt not post any item through the letterbox.” How exactly would items be posted through the letterbox when the property has controlled access not allowing anyone to walk to the door to drop something in the letterbox? I doubt if any mail comes directly to their residence. How secure is that? The tabloids have written at great length about Frogmore being like a ‘fortress.’
Security at the residences of royals is tight and may be even more stringent for the Sussex family thanks to the real danger of people who feel emboldened by the incendiary articles in the tabloids. Recently two young men were sent to prison for death threats to Prince Harry because they believe him to he a race traitor since he married a biracial woman.

The article claims the warnings were made at a recent residents meeting where the issues of the Sussexes move to the private Home Park estate was raised. It does not make clear if the meeting was held before or after the move. If before, where is the proof the Duke and Duchess were involved; and if after what were the concerns? The last three paragraphs are the main reason the article should not have been written. It reads as follows: A spokesman for Buckingham Palace states,

“The Duke and Duchess had no knowledge of this briefing and no involvement in the concept or the content. This was a well-intentioned briefing to help a small local community know how to welcome two new residents and help them with any potential encounter. There was no handout or letter. The talk undertaken by a local manager was widely viewed as being well received.”

Since the false claim about the ‘commandments’ seemed to be merely a pretext for the tabloid to once again voice their objection to the Sussexes’ wish for privacy; the denial becomes an afterthought included more out of form than substance.
Placed above the denial from the palace is the tabloids’ perceived grievances about the Sussexes expecting the privacy that other Royal expect and are given. The article reminds you that the tabloids do not know the new dog’s name, though they present it as a privilege denied the residences.

They once again falsely claim the £2.4 million was “taxpayer cash” and continue to push the narrative that the cost of the renovations is a loan that would have been satisfied by making details of their son’s birth public, granting a photo call on the steps of the hospital hours after birth, allowing cameras at the christening and releasing the godparents’ name (never mind the godparents are private citizens who may not wish to have their name released). They also purposely include the cost of the landscaping and gardening into the cost of the renovations, implying that another £600K will be borne by the taxpayer. They never mentioned the cost will be borne by the Duke and Duchess, nor do they offer any proof the £600K is the actual cost.

The media’s sense of entitlement to every aspect of the Sussexes’ life seems disproportionate given the frequency with which they remind readers that Prince Harry is “only sixth in line to the throne”. What they fail to say whether it’s from a troll or fan, stories about the Sussexes bring the eyeballs and generate clicks. From the time their relationship was revealed, the tabloids have been waging a duplicitous, spiteful campaign against the Duchess of Sussex, heavily tinged with racist, xenophobic, sexist rhetoric. Access to every area of the Sussexes’ life would be a financial boom for the tabloids who have done nothing to deserve even partial access, but they continue to feel the Sussexes should be (further) punished for not surrendering.

On July 30th Camilla Tominey appeared as the guest royal correspondent on the Nine New Australia Today Show hosted by Ms. Georgie Gardner. Camilla in her sly way acknowledges Georgie as massively pro-Meghan. The main purpose of her appearance was to air the UK press grievance concerning the Duchess of Sussex role as guest-editor of the September 2019 issue of British Vogue claiming this to be an inappropriate role for the Duchess.

Camilla believes the Duchess is being a little too political, thinks she should be engaged in more low key charities such as the local Red Cross, complains that there are only two white women on the cover and no men, and the face of the Queen should have been included. Of course those who have seen the front cover know there are more than two white women shown, men are not usually on the cover of Vogue and I’m not sure the Queen needs to be recognized as a Force of Change at this stage in her reign. Excerpts from the conversation between the Today Show host Ms.Georgie Gardner and Ms. Tominey is as follows:

Georgie: Give her a break, she’s using her platform for good causes. She’s damned if she doesn’t. How would she have got this across the line? Would she have to have gotten approval from the Royal Household?

Camilla Tominey: The Royal Household would have known about it. There’s comparison to the Kate one in 2016 where it was a lot more low key and she wasn’t guest editing…

Camilla Tominey: She was on the cover, yeah.

Georgie: You could argue that was, you know, inappropriate.

Camilla Tominey: You have to remember as well Georgie this is coming after a weekend report, suggesting that the couple when they’re on their Frogmore Cottage estate have told people not to speak to them, not ask about the baby, not to stroke their dog. There’s been a few negative headlines.
-end of excerpt-

Note the sudden change of topic. EVEN if she believed the story, which I doubt, the headline reads “FLUNKIES” it does not read Harry & Meghan. Camilla had a narrative to push, that it was “inappropriate” for the Duchess of Sussex to guest-edit Vogue, even though she admits the Duchess would have gotten approval. When asked why Duchess Meghan was inappropriate but Duchess Kate was not, Camilla ignored the question and instead repeated the false claim about the ‘commandments’.

Camilla repeated a story that she should have known had no merit and at the very least had nothing to with the Duke and Duchess of Sussex. Her response was one of desperation, as she was not expecting her claim to be challenged and rather than concede, she was attempting to create controversy where there was none, she latched onto the lie.

Camilla Tominey claims to be an award winning journalist. She is the Associate Editor of the Daily Telegraph in London, a royal correspondent, journalist, and broadcaster. In her article as with this interview, she has shown in her coverage of Duchess Meghan, that she is not above falsehoods and pushing the narrative that the Duchess of Sussex is difficult and demanding is her ultimate goal.

Emily Andrews and Camilla Tominey, certainly not the Voices of Change.

50th Anniversary of The Investiture of The Prince of Wales

Childbirth: A choice not a tradition: