The title: Prince of Wales was first

“…created by Llywelyn ap Gruffydd in 1267, but since the conquest of Wales in 1282, it has been given to the eldest son of the King or Queen.” (BBC website, The Investiture of the Prince of Wales 1969, updated June 2009)

The British Royal Family recognizes Edward of Caernarfon (who became King Edward II) as the first Prince of Wales. Consequently, since 1301,

“most, but not all, of the eldest sons of English sovereigns have been given the title.” When the heir-apparent ascends to the throne, the title of Prince of Wales “ceases to exist…until the Monarch bestows it upon a son.” (Britannica, Prince of Wales).

“The title Prince of Wales was created by Letters of Patent and” a “ceremony” was “usually held in front of the members of the Houses of Parliament.” (BBC Wales, The Investiture of Edward VIII- success before tragedy, July 2011)

“… was conferred on Prince Edward at Caernarfon castle in an elaborate ceremony which appeared to be ancient. In fact, it was the first time it had been held in that form. (BBC website, The Investiture of the Prince of Wales 1969, updated June 2009)

Ummm…Looks like the British Royal Family likes to put on a good show. What do you think?

“The decision to make the investiture of Prince Edward (Edward VIII as he became) a public occasion owed much to the machinations of David Lloyd George.” The Right Honourable David Lloyd George was a Welsh politician and later became a British Prime Minister; his dream was to see the Prince of Wales invested in Caernarfon, Wales instead of in London, England. George was also

“[c]oncerned about his own popularity – and the clear growth of Welsh nationalism – he persuaded King George V to agree to a public ceremony.” (BBC Wales, The Investiture of Edward VIII- success before tragedy, July 2011) 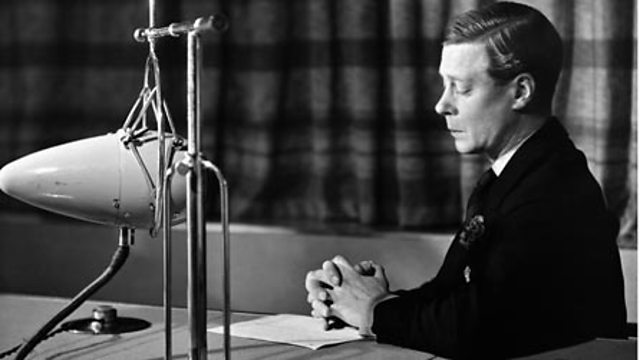 HRH the Duke of Windsor (became Edward VIII in 1936) broadcasting to the empire from Broadcasting House, April 1935. Source: BBC UK

Prince Edward became the 20th Prince of Wales, when George V bestowed the title to him on June 23, 1910. His Investiture Ceremony, which was the first to take place at Caernarfon Castle in Wales, occurred on July 13th, 1911.

Prince Edward became King Edward VIII upon the death of his father George V on January 20th 1936. His abdication 326 days later, paved the way for his younger brother Prince Albert to become King. Prince Albert assumed the name King George VI, when he ascended to the throne.

Elizabeth was never given the title “Princess of Wales” because if her father had had a legitimate son, that son would have taken precedence, and would have been the “heir apparent”; thus, named the “Prince of Wales”.

When Elizabeth became Queen in 1952, Charles automatically became the Duke of Cornwall, at the age of three years old. The title Prince of Wales is not hereditary; it has to be created & bestowed by the Sovereign on to his/her eldest living son.

At the closing ceremony of the 1958 British Empire and Commonwealth Games held in Cardiff, Wales, HM Queen Elizabeth II told the crowd,

“I intend to create my son, Charles, Prince of Wales, today. When he is grown up I will present him to you at Caernarvon.”

“Well I feel that it is a very impressive ceremony. I know perhaps some people would think it is rather anachronistic and out of place in this world, which is perhaps somewhat cynical, but I think it can mean quite a lot if one goes about it in the right way; I think it can have some form of symbolism. For me, it’s a way of officially dedicating one’s life or part of one’s life to Wales, and the Welsh people after all wanted it, and I think also the British on the whole tend to do these sorts of ceremonies rather well, and for this reason, it’s done well, in fact, and I think it’s been very impressive, and I hope other people thought so as well.” (British Pathé, Investiture of the Prince of Wales 1969)

On July 1st 1969, Prince Charles was invested as the Prince of Wales & Earl of Chester in Caernarfon Castle in Wales.

During the investiture, the Prince is bestowed with the Honours of the Principality of Wales; which are a coronet (the symbol of sovereignty), a gold rod (symbolizes temporal rule), a mantle, a sword and gold ring (the symbol of unity; Prince’s marriage to Wales).

The 1969 Investiture of the Prince of Wales was a more modern updated ceremony to the 1911 Investiture of the Prince of Wales. The ceremony itself was the culminating event of year long celebrations that served to “…advertise this new Wales to the world and promote tourism.” It was designed by 1st Earl of Snowdon (Princess Margaret’s husband at that time); and it was broadcasted to

“[a] world-wide audience of 500 million people (including 19 million in Britain)… (There were 4,000 guests in the castle and 90,000 on the streets of Caernarfon.) This was the largest TV audience ever gained for an event in Wales, so for many people it would be all they knew about the country.” (BBC website, The Investiture of the Prince of Wales 1969, updated June 2009)

The Investiture of the Prince of Wales was a great success.

Did you know? The Duke of Windsor (formally King Edward VIII) illegally took the Coronet of George, Prince of Wales with him when he went into exile.

What is a word I can use for the phrase “illegally took”? Could someone help me??

The Coronet of George, Prince of Wales remained with David until his death in 1972; when it was retrieved & returned to the UK.

When Prince Charles was invested as the Prince of Wales in 1969, there was no available coronet; because the only other one, the Coronet of Fredrick, Prince of Wales was too fragile to use. Consequently, a new coronet had to be made for Charles.

Ummm…and I thought that Royals couldn’t accept expensive gifts. I guess they can & they do!