While to any objective observer, Her Royal Highness the Duchess of Sussex, Meghan, has made a smooth transition into and taken her place as a bona fide member of the British Royal family following her marriage to His Royal Highness the Duke of Sussex, Prince Henry Charles Albert David (Prince Harry), currently the sixth in line to the throne, the British tabloids, right-wing trolls, and armchair critics and haters have sought to convince the world otherwise. The criticisms and negative reportage relating to just about everything that the Duchess does or says, as well as speculative and fictional stories about things she has neither done nor said are ubiquitous and will not be enumerated here.

The specific purposes of the daily and persistent vilification of Duchess Meghan appears to be twofold. First, to convince the British public (or at least the racist elements within it) that, as a woman of color, Duchess Meghan does not belong in the royal family and, in the process, make her the most hated Princess of the United Kingdom, or, at least in the country she has adopted through marriage. Second, to break her spirit or put so much strain on her person and marriage that she would find life in the United Kingdom sufficiently unbearable as to quit her marriage and “return to where she came from”, as Piers Morgan recently articulated on behalf of her detractors, who call themselves Royal reporters but who should really be collectively referred to as the Meghan Markle hate squad.

Recently, I signed a petition on Change.com titled: “Stop the Open Racial Attacks on Meghan” and circulated the link to friends and family. One friend responded, informing me that Duchess Meghan’s “unpopularity” was not racially motivated. According to this friend, Duchess Meghan was being attacked because she has refused to “conform” and “lay low”. In a follow-up conversation, the friend provided several “reasons” for the persistent public bullying of the Duchess of Sussex. This article takes a critical look at the reasons that my friend articulated because they seem to be universally held by media bloviators, their followers and internet trolls, as well as some well-intentioned citizens and residents of the United Kingdom.

The Duke and Duchess of Sussex are always doing things that they should not do, so this keeps them in the media.

This is the most frequent response when Duchess Meghan’s critics are challenged to provide a solid factual basis for their opposition. However, a general assertion that the Duke and Duchess of Sussex are “always doing things that they should not do” is nonsensical and asinine; a convenient subterfuge for racial and gendered responses to people who are acting in the exact same way that other members of the royal family act.

The most recent example of this absurdity is the Daily Mail’s response to Duchess Meghan’s choice of a black evening gown to wear to her designer friend, Misha Nonoo’s wedding. Screeched the Daily Mail in a typically eye-catching headline: “Meghan Markle breaks from tradition by arriving in a sheer BLACK (yes, in capital letters) Valentino dress that costs a staggering 9,000 pounds to Misha Nonoo’s wedding[]”, while seemingly forgetting to mention that Princess Beatrice (a royal by birth) also wore black to that very same wedding, or that several other women arrived in black gowns to the same wedding.

In fact, the same Daily Mail, in what appears to be another headline, featured model, Karlie Kloss, in a black strapless gown with an approving caption: “Karlie Kloss amps up the glamour in a strapless black [yes, in lower case letters] feathered gown as she arrives at Misha Nonoo’s wedding of the year in Rome”. A shot of the pages juxtaposed prompted a query on Twitter: “How is this not biased reporting? Same news outlet, same wedding, same dress colour, but one is shocking and one is glamorous.” The tweet also went on to point out that the paper had inflated the price of the dress over its actual price of six thousand pounds. 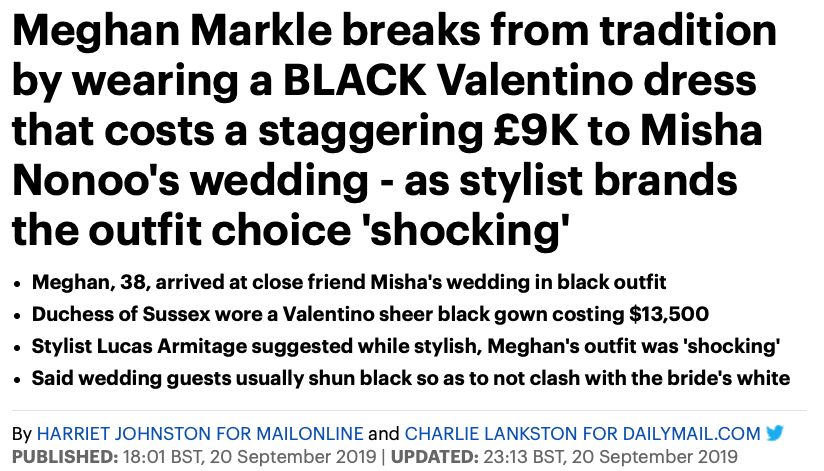 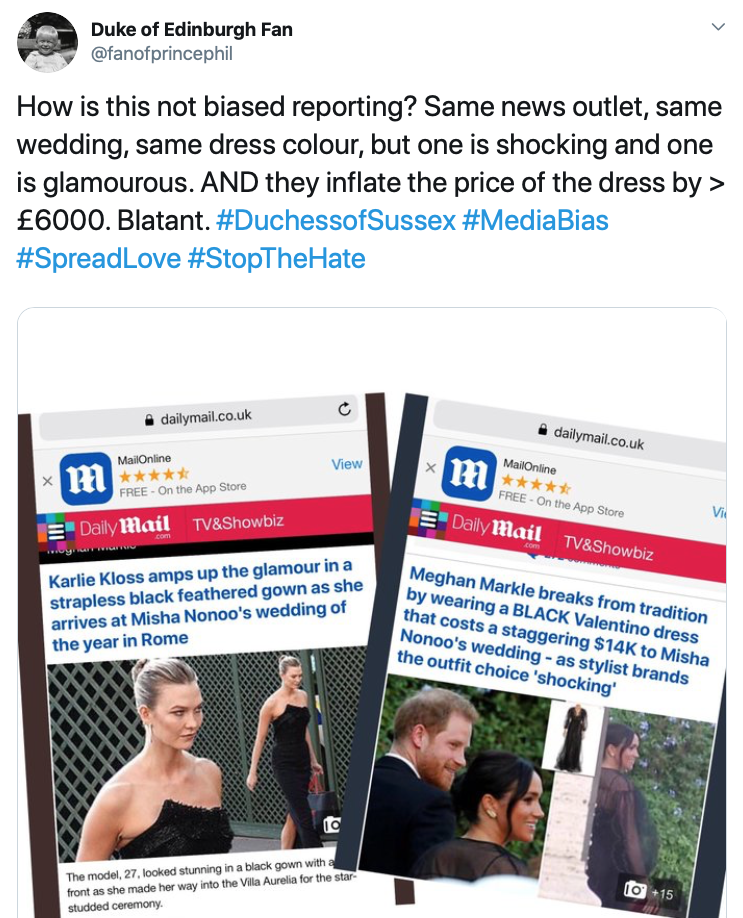 For unknown reasons, the Mail subsequently moved Karlie Kloss’ picture inside the body of the article, with a slightly different, but still approving caption: “Karlie Kloss proudly displayed her slender physique in the strapless thigh-split black [yes, still in lower case letters] gown with ruffled neckline. . .” I will refrain from saying much about the double standard in the “thigh-split” dress characterization, except to observe that when Duchess Meghan wore a thigh-split dress during her official tour of Oceania in 2018, there was an uproar, a lot of hyperventilating and pearl clutching among the geriatric gossip set, who call themselves royal reporters, that shadowed Duchess Meghan during the tour.

But back to the Daily Mail and its deliberate distortion of facts. . . Several of Duchess Meghan’s supporters took to twitter to denounce and call out the rag for its bias and hypocrisy. One supporter, @RoyalDetective8, published a picture of Britain’s second-in-line as Queen consort-in-waiting, HRH Duchess of Cambridge, Kate Middleton, in a BLACK, over-the-knee length dress that she previously wore on two formal occasions – once, the very first time that she met the British Monarch, Queen Elizabeth II, and subsequently to a wedding.

This Daily Mail example is but a single illustration of the hypocrisy and double standard that British tabloids apply in covering Duchess Meghan. It also illustrates the dual strategy that the media have adopted in a sustained campaign of vilification designed to undermine Duchess Meghan’s legitimacy as a royal. This strategy comprises: (a) the pointless presentation/distortion of conduct or action common to other royals as something unusual and a break from tradition (“doing something that they should not do”); and (b) a gratuitous emphasis on the price of the dress, even inflating that price considerably.

The latter strategy easily feeds into the media-created and sustained narrative of Duchess Meghan as a “spendthrift diva” living large off the sweat and labor of United Kingdom taxpayers. Afterall, who wouldn’t be incensed by the image of a woman flaunting a nine-thousand-pound dress, presumed to have been purchased with British taxpayers’ money, at a friend’s “celebrity” wedding?

As always, the tabloid did not consider the possibility that Duchess Meghan bought the dress with her own money, a more likely alternative considering that this was a private and personal engagement. The intended impact of the headline is magnified considerably by the fact that the same British tabloids appear to have adopted a contrary policy of NOT REPORTING the prices of Kate Middleton’s clothing and accessories, even though, as recently disclosed by the Express, her wardrobe costs more than Duchess Meghan’s at a whopping 50,000 pounds per day” and the Duchess of Cambridge spends three thousand pounds per outfit more than the Duchess of Sussex does.

All of these feed into the British tabloids’ obsession with and objectification of Duchess Meghan, such that everything she does, no matter how insignificant, is minutely scrutinized for its deleterious consequences on the country and the monarchy. As an American, a woman, a woman of color and, yes, a divorcée, Duchess Meghan has come to embody and personify a nation’s antipathy and resistance to change and progress, it’s frustration and fears.

In this way everything Duchess Meghan does is a barometer of the nation’s health and the crown’s endurance. In this way, the familiar and hospitable gesture of serving avocado toast and tea to a visiting friend becomes approval and support for terrorism. In this way, a member of the British parliament frustrated by stalled Brexit negotiations can lash out at “Harry’s bitch”, with no consequence. In this way Duchess Meghan’s newborn son is depicted as a chimpanzee by an employee of the country’s taxpayer-funded broadcasting corporation, again, with zero consequence.

In this way appropriately dressing in a gorgeous black evening gown to a friend’s private wedding receives prime national scrutiny over and above persistent and very real allegations that Prince Andrew, a British royal by birth, had improper sexual contacts with minors, contacts arranged by his disgraced ex-convict pedophile friend who chose to kill himself in a New York prison rather than face his accusers in court. In this way Duchess Meghan is used to foil scrutiny of transgressions, large and small, by other members of the British royal family.

And, in this way, Duchess Meghan has become someone who has no soul and no feelings. She is not made of matter — not flesh and blood, like the rest of us, and she feels no pain. To the contrary, she is expected to absorb and endure the abuse. . . Pose. Turn. Smile. Wave to your abusers and calmly wait for the cycle to repeat. And oh! By the way, you must show us your baby upon demand. . . Yes, that same baby that one of us likened to a chimpanzee!!!