Why are the Duke and Duchess of Sussex preaching their message of being environmentalists while they travel on private jets?

All royals, including the Prince of Wales who happens to be the chief environmentalist in the family, travel on private jets, depending on the number and location of their daily engagements and time constraints.

Why would Prince Harry say he would have two children maximum to save the planet, knowing that his brother has three? This statement caused Prince William to fly economy and not private jet, to get back at his brother.

Prince Harry said he and his wife opted to have just two children because he believes, as many others who have weighed in on the issue have asserted, that uncontrolled population growth has contributed to the present global environmental crisis and continued unchecked growth will only escalate the problem. Prince Harry was not telling anyone else what to do, or casting shade at his brother. In fact, not too long ago, Prince William himself acknowledged the threat of uncontrolled population growth on the environment. Speaking at a charity gala dinner held in London in 2017, Prince William said, inter alia:

“In my lifetime, we have seen global wildlife populations decline by over half,” he said.
“We are going to have to work much harder, and think much deeper, if we are to ensure that human beings and the other species of animal with which we share this planet can continue to co-exist.
“Africa’s rapidly growing human population is predicted to more than double by 2050 – a staggering increase of three and a half million people per month.
“There is no question that this increase puts wildlife and habitat under enormous pressure.
“Urbanisation, infrastructure development, cultivation – all good things in themselves, but they will have a terrible impact unless we begin to plan and to take measures now.”

Of course, Prince William was widely panned as being hypocritical because, at the time he was lecturing Africans about the dangers of overpopulation, his wife was carrying their third child. [The South African; In Style]

Prince William, who from all reports, allegedly did not exactly welcome Duchess Meghan with open arms as his brother’s chosen life partner, purposefully decided to throw his brother under the bus, not because of his brother’s disclosure that he was going to have only two children, but because he knew that Duchess Meghan, not his brother, would shoulder the brunt of any criticisms generated by what appears to be a mean-spirited overreaction. And that’s because Duchess Meghan is blamed and constantly attacked by the British tabloids for each and every decision made in her family, even including decisions that are clearly made either jointly or by Prince Harry.

It is not a coincidence that the negative press against Duchess Meghan (at least after the wedding) started immediately after the couple’s aforementioned tour of Oceania, which generated glowing reviews of Duchess Meghan’s performance and some negative press for the Duchess of Cambridge, with some going as far as suggesting that her performance in eight years as a royal and second consort-in-waiting had been less than stellar. [Mercury News, The Daily Beast] In fact, some of those reports/reviews suggested that the more senior consort-in-waiting would be well-served to take some lessons from her lower-ranked sister-in-law. 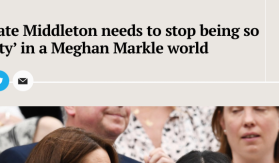 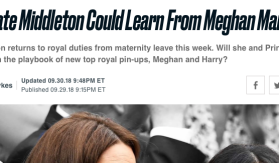 Understandably, for William, a man who has been described as thin-skinned and arrogant by those who should know (i.e., the much-revered palace sources who have been used liberally to smear Duchess Meghan), this proposition was not only unacceptable, it must have rankled him deeply. It does not hurt either that, miraculously, the persistent rumors of his sexual dalliance outside of his marriage were conveniently eclipsed by the specious allegations of what, even if true, amount to minor infractions leveled at Duchess Meghan in what appears to be a deliberate strategy to further damage the Sussexes in order to maintain a “pristine” image of the heir to the throne and his consort-in-waiting, regardless of the cost to the spare, his wife and their barely three-month-old baby boy.

The Duchess should not think that she can come into an old institution with her “can-do” attitude and think they will leave her alone but if she were to do nothing and toe the line, she will be left alone.

The Duchess of Sussex did not marry Prince Harry so that she would “do nothing and toe the line”. Unlike her sister-in-law, Duchess Meghan lived a fully developed life as an independent and successful professional, a philanthropist, a feminist, and an astute and passionate advocate for women’s empowerment before she met, fell in love with Prince Harry, and married into the British Royal family.

After graduating with a bachelor’s degree from Northwestern University School of Communication in 2003, with a double major in theater and international studies, like the majority of fresh-faced, optimistic, university graduates from modest families in the United States, then Meghan Markle went out on a dogged pursuit of her dreams. She pounded the Hollywood pavements day after day, auditioning for parts, shrugging off rejection after rejection until she was cast in her breakout role in the successful television series, Suits, shot in Toronto, Canada. While struggling to land her big role, then Meghan Markle worked at odd jobs to make ends meet, including serving as a restaurant hostess, teaching gift wrapping at a local store, and parlaying her impeccable cursive into a reliable income stream as a calligrapher.

Duchess Meghan’s philanthropic bona fides is unquestionable, developed and honed at the Hospitality Kitchen on Skid Row in downtown Los Angeles, where she worked as a volunteer, serving food to the hungry, the sick, and the homeless and cleaning up after them. Interestingly, a former Catholic high school teacher inspired then Rachel Meghan to start her own charitable mission. [Crux Now, ABC NEWS]

Similarly, Duchess Meghan’s feminist credentials were developed early in life, or “engraved in her DNA” as her mother, the lovely and dignified Doria Ragland, is reported to have said. Duchess Meghan’s feminism did not only blossom early, but it was so strong that, at just eleven years of age, she famously mounted a letter-writing campaign that compelled the commercial giant, Proctor and Gamble, to change its sexist advertising.

Once she became a successful actress and social media influencer with her own self-developed lifestyle website, The Tig, Duchess Meghan dedicated considerable amount of her time to philanthropic causes geared towards women empowerment. As a Goodwill Ambassador for the United Nations, a UN Women Advocate for Leadership and Political Participation, and a World Vision global ambassador, Duchess Meghan traveled to different parts of the world, including Africa and India, to advocate for young girls and women. On her own initiative, Duchess Meghan organized and staged a charity event in Canada that raised more than $15,000 towards a World Vision clean water project. And she did all this, while working on Suits, publishing her popular Instagram website “The Tig”, and delivering powerful, inspirational and hopeful speeches at events and forums on her favorite subject – Women Empowerment.

There is no doubt that, for some in the United Kingdom, Duchess Meghan’s marriage to Prince Harry has engendered an unnerving tension between, on the one hand, the ethos of a dynamic, independent and accomplished overachiever, perceived globally as a change agent determined to serve globally as a catalyst for meaningful social and economic change through women’s empowerment, and, on the other hand, the predictability of a closed, ancient and stodgy system that is intolerant of any change whatsoever.

Duchess Meghan referenced this duality in a recent speech during a visit to The Justice Desk (an organization dedicated to supporting children, vulnerable people, and local communities) as part of her family’s ongoing tour of South Africa. Reportedly, by way of introducing herself, Duchess Meghan highlighted her agency and individual commitment to the causes she has chosen to promote in the following statement:

“On a personal note, may I just say that while I am here with my husband as a member of the royal family, I want you to know that for me, I am here as a mother, as a wife, as a woman, as a woman of color, and as your sister”, adding “I am here with you, and I am here for you”.

All this is to say that the Royal family knew of Duchess Meghan’s background before the Queen gave Prince Harry, then fifth in line to the British throne, permission to marry then Meghan Markle. To expect that, with such a rich and accomplished background, Duchess Meghan would, to avoid bad press, sit back with folded arms and do whatever other female royals do now or have done in the past is delusional and somewhat akin to the proverbial ostrich that buries its head in the sand. Whether or not the British media like it, whether or not they are accepting of it, Duchess Meghan is a positive Force for Change, not just in the United Kingdom, but globally.

SMOKE AND MIRRORS 1: Royalists, The Royals They Support And The People Who Cover Them

Trolling, gaslighting and prejudices in the royal fandom