One of the secrets of the House of Windsor is that the most powerful position in the royal household is the advisor or courtier. This has become even more evident in the last few years, as we’ve been watching the dynamics of the royal household, since Prince Harry met and married Meghan Markle.

It has become apparent that the courtiers probably wield more power than the principals themselves. They have the ability to decide who is in or out, who gets a bad rap and whose most embarrassing secrets are concealed. One figure, who has emerged as one of the most powerful people within Queen Elizabeth’s household is Angela Kelly. Her officially designated role is Personal Advisor to Her Majesty(The Queen’s Wardrobe) or simply, the Queen’s dresser. 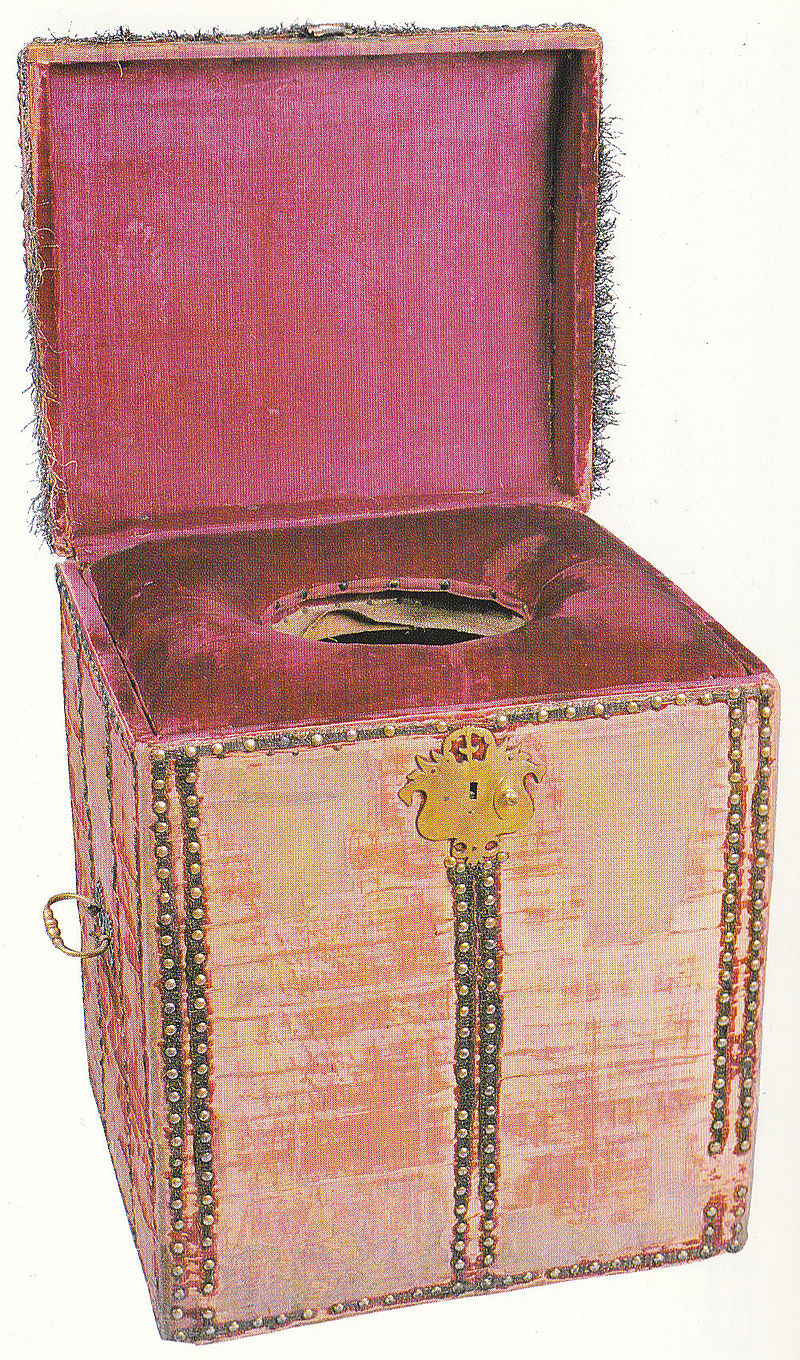 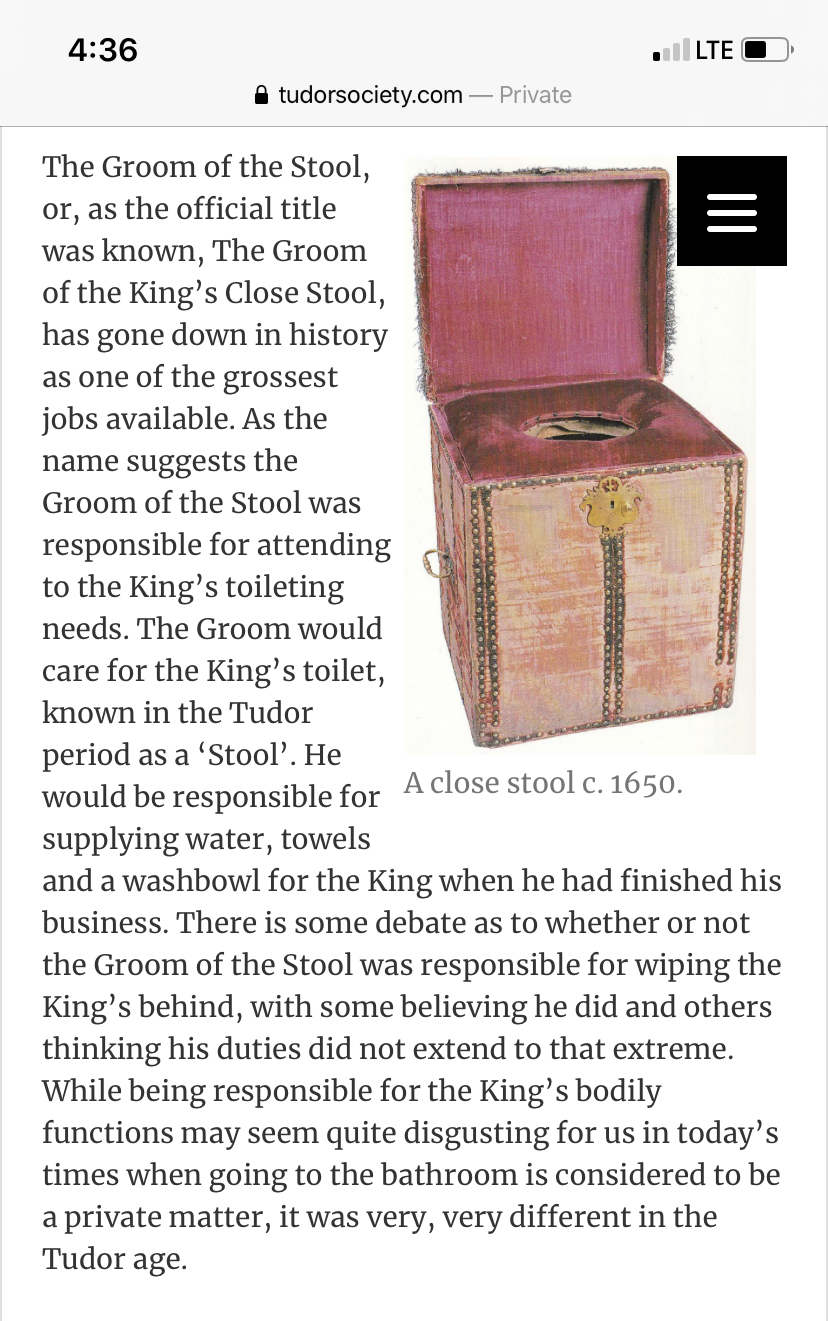 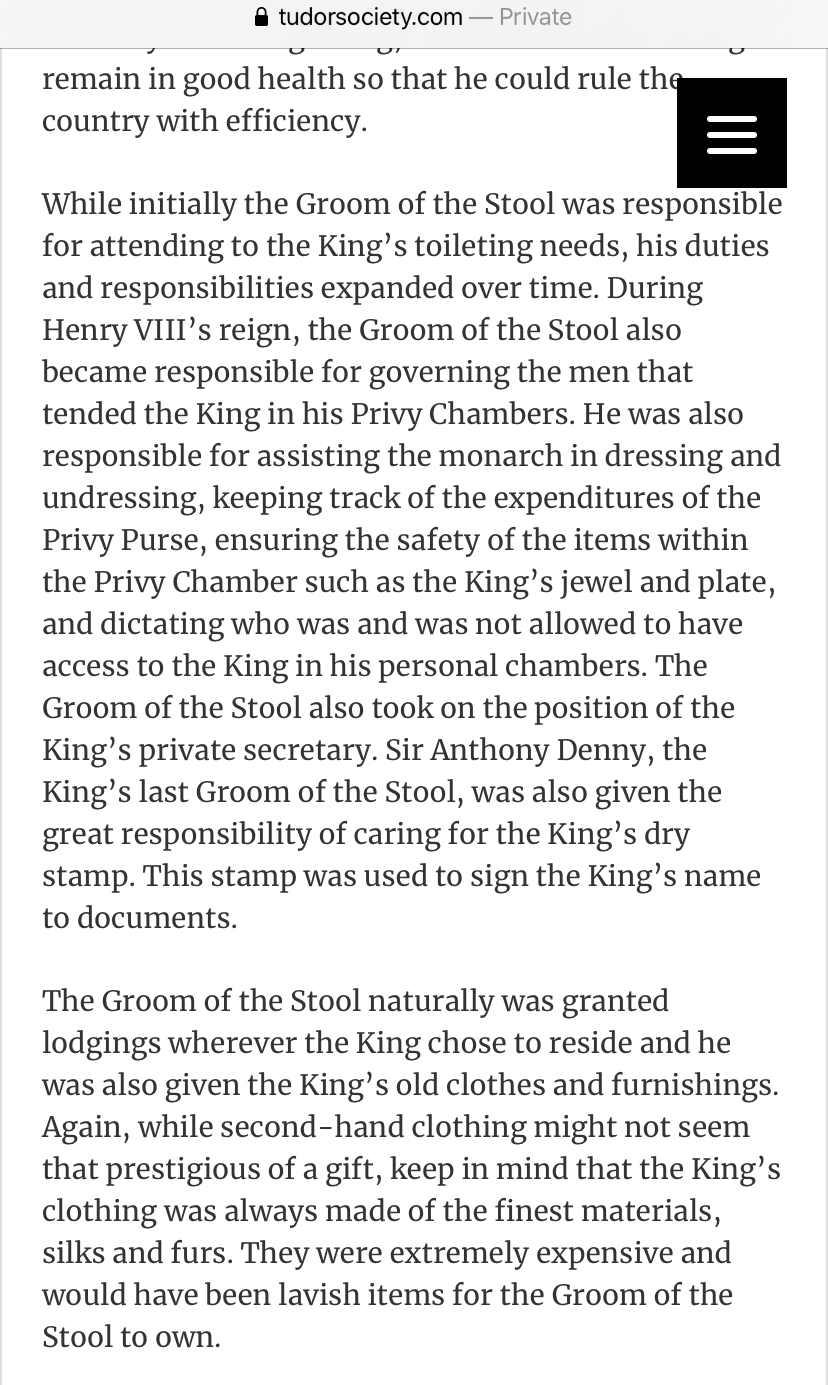 The role was created during the reign of Henry VII, to monitor and assist in the King’s bowel motions. It was considered the most influential role in the monarchy, owing to the intimate nature and proximity to the monarch. He was said to be even more powerful than the Prince of Wales. This person was of noble heritage and took care of matters within the monarch’s inner(privy) chamber, including matters of toileting.

Though there is debate, it is thought that the groom of the stool even wiped the monarch’s bottom after the business was done. The role comes with a lot of perks, including lodgings wherever the monarch stayed.

Modern day historians indicate that today, that position has been refined as an advisor, courtier, confidant, and friend. According to the Telegraph Angela Kelly’s resume indicates that she was a housekeeper, and she boasts that probably her discretion and trustworthiness earned her the position. 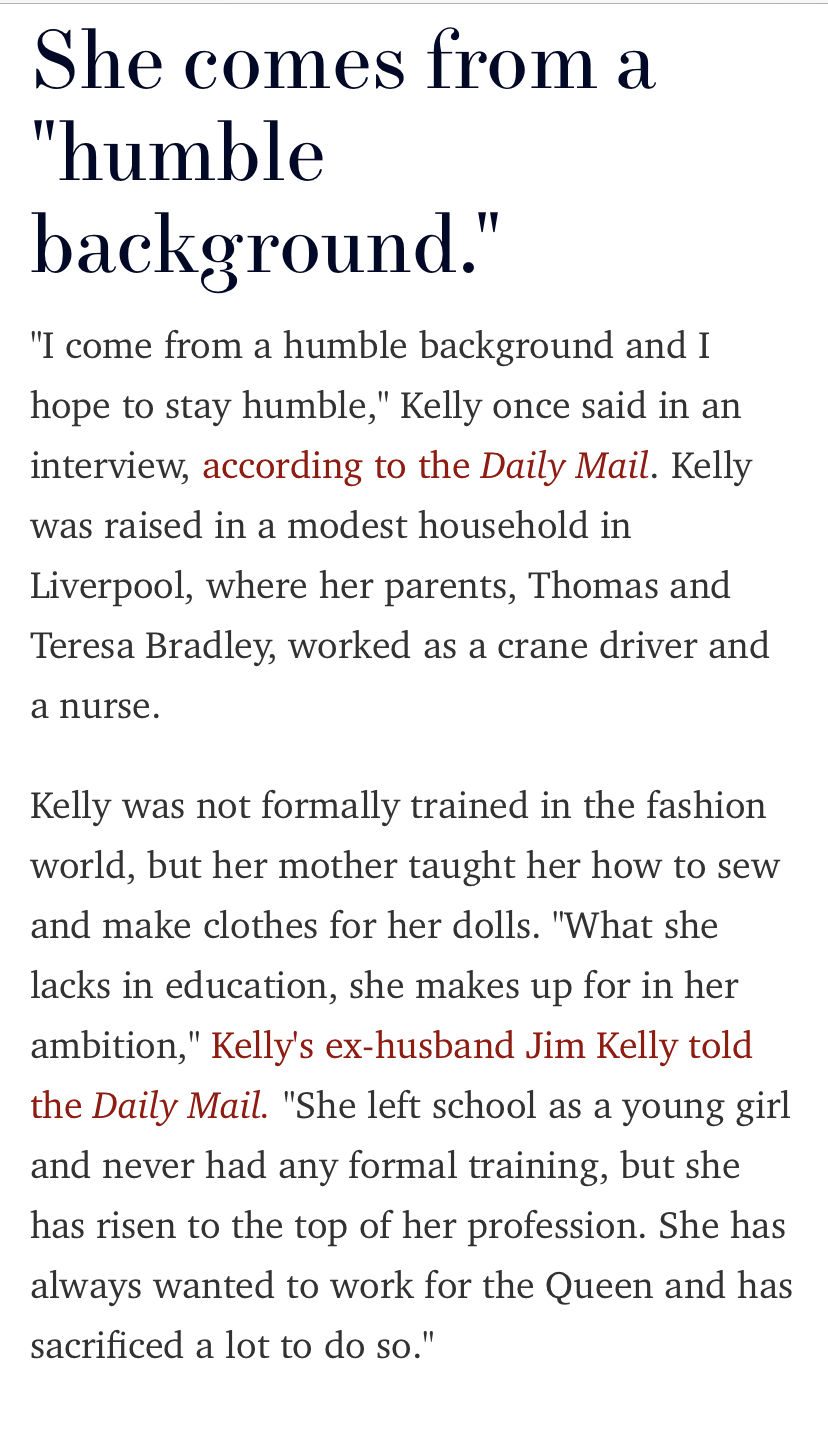 While in the past the groom of the stool was reserved for the children of noblemen, perhaps today former housekeepers like Angela have a chance of serving the monarch in such an intimate capacity.

What she lacks in education, she makes up for in her ambition. She left school as a young girl and never had any formal training, but she has risen to the top of her profession. She has always wanted to work for the Queen and has sacrificed a lot to do so. Jim Kelly, Ex-husband

Angela is on our radar because of her reported role in the unnecessary confusion regarding Meghan’s tiara for the Sussexes’ 2018 nuptials. Given that the Queen had already signed off on Meghan’s choice of tiara, why was Angela so keen to frustrate the process of fitting it appropriately to her planned hairstyle together with Meghan’s hairdresser? Better still, why did Angela Kelly feel confident enough to ignore and stonewall the repeated requests to the queens grandson? Do the staff not work for the royals or is it the other way round?

Angela is even reported to have teamed up with William Cambridge to prevent Meghan from wearing any of the crown jewels, particularly those worn by Diana. Perhaps in Angela’s mind it was the jewels that would put Meghan in the limelight. She could not understand that a woman who had graced the most relevant stages already had the limelight and did not need crown jewels to shine.

Angela Kelly has written 2 books which she was permitted to market and monetize while still in the employ of the Queen. In addition, she started her own clothing label which whatever custom it receives, can be largely attributed to her association with the Queen. This is significant leeway, considering that a blood prince, who IS royal by birth cannot even use the word royal in his independent life, even though royal is so commonplace, you can find all kinds of household supplies with that moniker.

I mean, this woman with no real education or experience in legal or business matters, was reportedly in charge of ironing out the terms of Harry and Meghan’s separation from the royal family. Is that just wild or am I dizzy?

Add to that, Angela has reportedly had some unsavory behavior as an employee of an institution that is obsessed with observing protocol and being proper. Not just any employee, but one so closely linked with the Queen. For one, she’s reported to have gotten into a physical fight with junior staff member over community “entanglements”, if you catch my drift – one that had them rolling on the palace lawn. Still, she maintains pride of place at the Queens’s side. 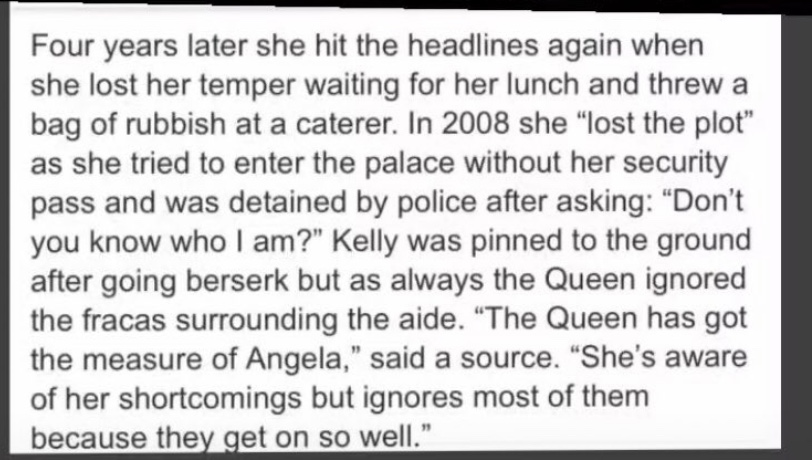 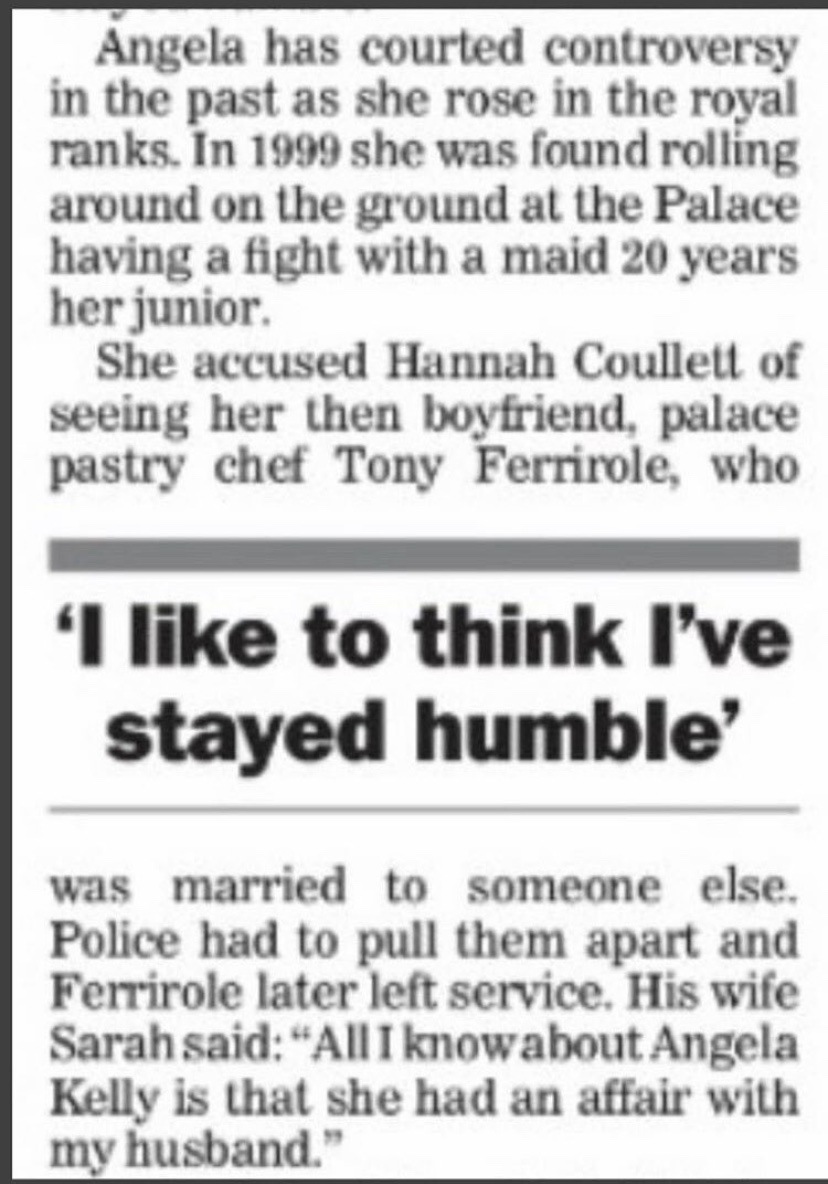 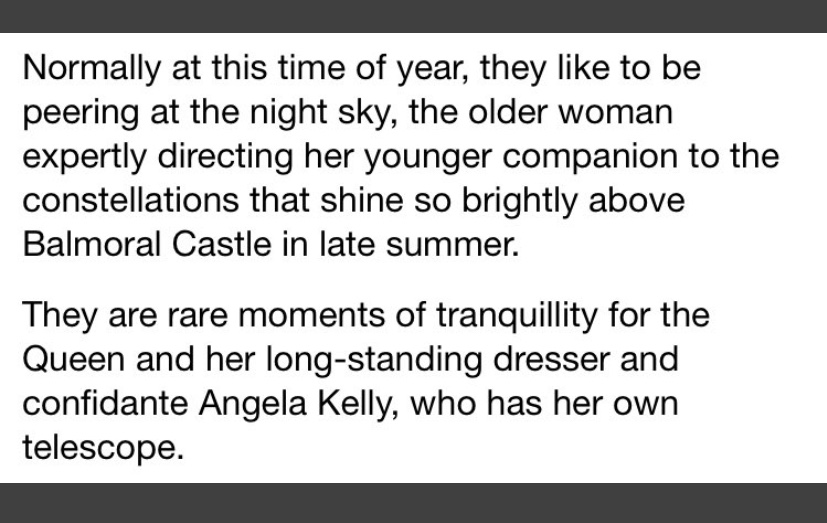 Angela Kelly has been also been described as a confidant, and even as a companion in some cases( Richard Kay). Whatever her position is, what is obvious is that she holds sway with the Queen.

According to Town and Country, Angela Kelly is “one of the few non-family members who is allowed to touch the Queen.” She is in the Queen’s very intimate inner most circle that she even lives at the Castle.

What is it about this particular aide, that compels her monarch to “overlook her shortcomings” and allow her such latitude? Her privilege and influence rival those of grooms of a past era. Is she’s a modern day groom of the stool, or more aptly a Lady of the Bedchamber? I too am curious.

14 comments on “The Curious Case Of Angela Kelly – A Modern Day Groom Of The Stool?”

This week in royal madness: Footprints of giants, henchmen and carbon emissions