“We’re a couple. We’re in love. I’m sure there will be a time when we will have to come forward and present ourselves and have stories to tell, but I hope what people will understand is that this is our time. This is for us. It’s part of what makes it so special, that it’s just ours. But we’re happy. Personally, I love a great love story.” Meghan Markle

Ever since Meghan and Harry brought their relationship into the open, they had stepped into the fishbowl existence that high-profile couples endure. While Harry had suffered growing up under a spotlight (think of The Truman Show movie), with his screw ups magnified more than his accomplishments, Meghan had not undergone such an experience.

They, or more directly Meghan, were faced with British media’s relentless effort to scrutinize, judge, shell out watered-down praise, but also with swift reversal, drown them with petty condemnation and untruths. Meanwhile, segments of the British public, aristocracy, and the Royal Family displayed zero sympathy for this couple.

What a hostile environment to endure in the middle of the most exciting time of one’s life. To emerge from their home, perform their royal duties, and be gracious to all, including some who wish nothing good for them must have required a daily mantra, probably several times during the day, of – “We’re a couple. We’re in love.”

But there also had to be that level of optimism that it will get better. It had to get better. Yet we know that when Meghan was interviewed in The African Journey documentary and said, “It’s not enough to survive…,” we heard more than those words. We heard a finality. The tone that said enough.

But this couple has faith, whether of a spiritual nature or with each other…or a bit of both. They are stronger in the face of adversity. And they are protecting Archie against what could have been a continuation of blind servitude to an outdated institution. For better, for worse. Let love win. 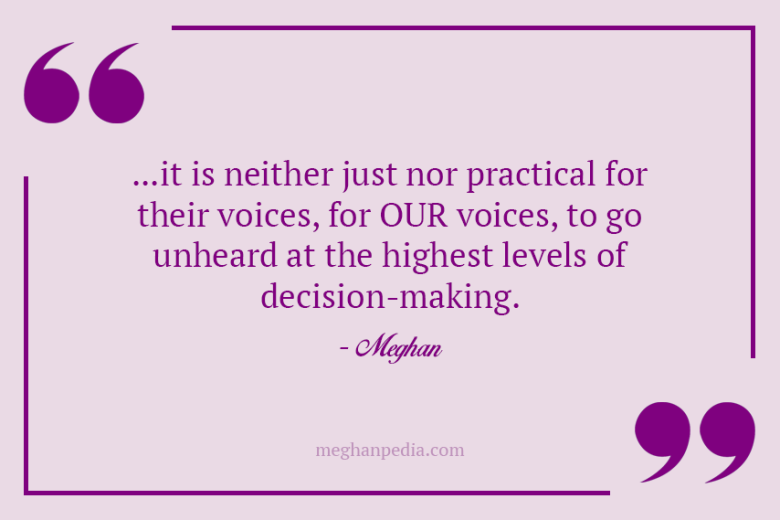 Meghan’s Gems: “It Is Neither Just Nor Practical For Our Voices To Go Unheard”

One comment on “Meghan’s Gems: “We’re A Couple…This Is For Us””