Before I get to far along in this missive, let me say for the record, no one I know who supports the Duke and Duchess of Sussex expects all white reporters to have their noses stuck up their butts and to be brown nosing and fawning in their reporting on this couple. However another scene from the movie “The Help” has me wishing the Duke and Duchess would invite Piers Morgan, Dan Wootton Camilla Tominey, and Emily Andrews, just to name a few, and have Minne (from The Help) serve them all a hefty piece of Minnie’s Special Chocolate Pie! In fact, I would like to see them all eat two pieces! A whole pie should be shoved in the mouth of the incomparable Eamonn Holmes. Honestly the Duchess of Sussex has made this nobody a bit of an internet meme who will forever be associated with the term “uppity.” 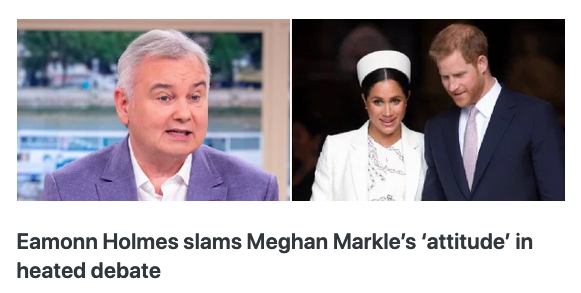 There has been so much ugliness. Honestly Piers Morgan never got to take his goodbye walk to crown the next Ms./Mr. UK bigot of the year. Close your eyes and imagine Piers walking down the aisle having beaten out the first runner up, Camilla Tominey (she’s wearing a sash that says “Miss Telegraph – Bigot 2019” – wearing a tiara she borrowed from Youtuber “Royal Reviewer”), Camilla is fighting back tears as the host (the owner of the Daily Mail) crowns Piers Morgan. They remove his Mr. “GMB – Bigot 2019” sash and drape a “Mr. Crybaby-Bigot 2019” sash over his bloated belly. They then crown him using Princess Diana’s Lover’s Knot tiara – gratefully loaned for the occasion by Piers’ patrons, the Duke and Duchess of Cambridge – who have front row seats. 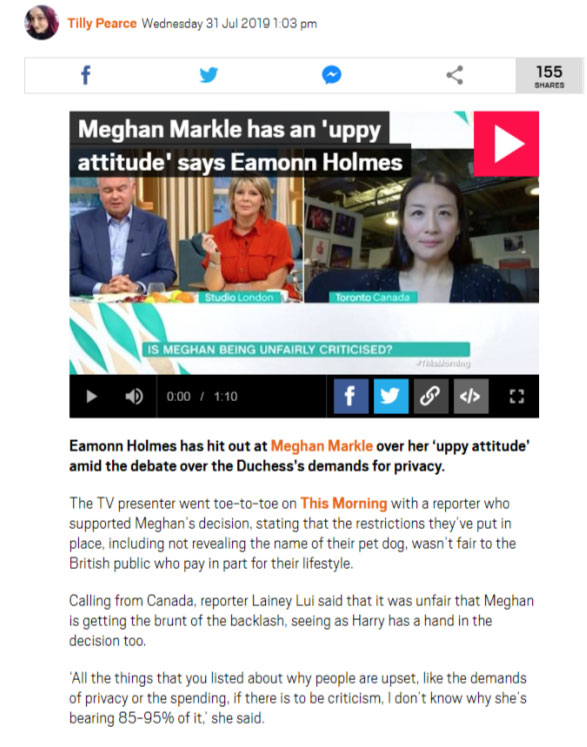 Also crying about not placing as finalists, are Dan Wootton and Ingrid Seward. Lucky Emily Andrews won the talent competition for the most imaginative fan fiction story – which she performed as a one woman stage play where she got to marry Prince Harry and saved him from the clutches of the black woman from L.A. As Piers sashays down the runway with his bouquet of wilted black roses, the theme from American Horror Story plays in the background…

So, why am I waxing fanciful about these people? I’ll tell you it’s because I am hurt. I have been moved to tears to see the unwarranted hatred and malicious sniping lobbed at the Duke and Duchess of Sussex ever since Harry decided to “up his game” and marry this woman.

What totally got my tears flowing this afternoon was the nice/nasty way Dan Wootton decided to twist the knife into the backs of Harry and Meghan with his tirade ACT II against the Duke and Duchess. Dan appeared on talkradio.co.uk/live 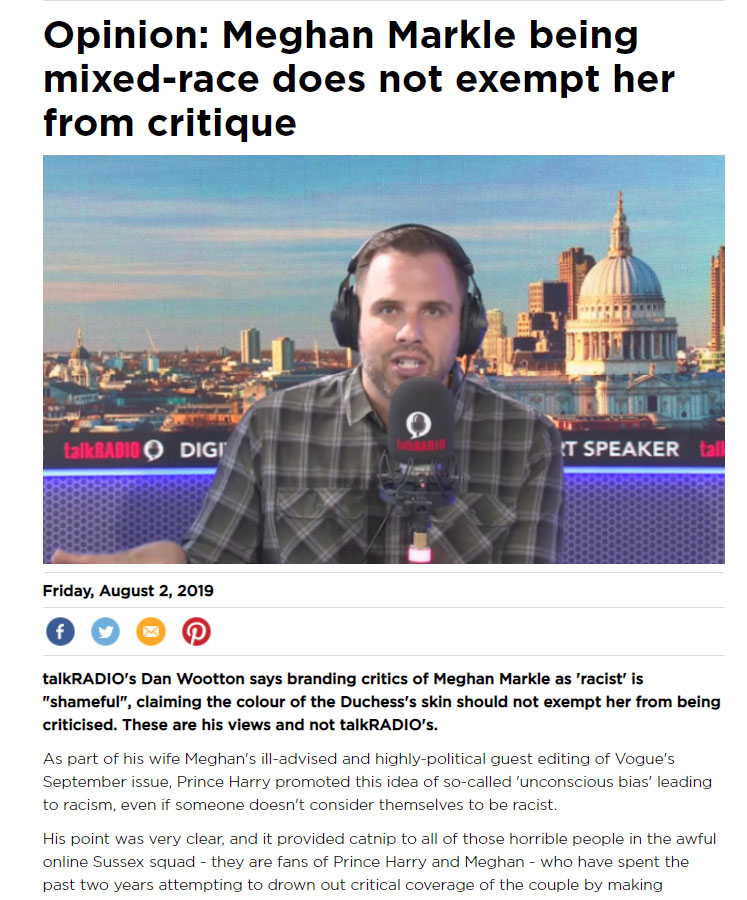 This disingenuous piece is Dan Wootton’s attempt to gaslight his critics. He’s preaching to the choir of screeching bigots and xenophobes that Meghan’s ethnicity does not exempt her from critique. It rings hollow. Why? Because the fact is no one is asking for that! No one is saying she should be exempt but we are asking why a certain other royal duchess is exempt for doing the same things.

A particularly nasty audio byte from this Dan Wootton diatribe was when he spoke slowly and clearly to ensure the Sussexes and their supporters were clearly shown that there are treacherous family members with the knives out for Harry and his wife. It kind of reminds me of the spiteful glee Lady Mary took when informing poor Lady Edith (Downton Abbey) that Matthew himself said Edith was barking up the wrong tree (Downton fans know what I’m talking about).

Hell hath no fury like a bigot exposed! See Dan looked like a bigger more obsessed fool than Piers Morgan when he appeared on Australian TV sputtering, spitting and gesticulating with his hands saying, “Royals. DO. NOT. GUEST. EDIT. MAGAZINES.” Then he patronizingly asked the presenter, “Am I making my point here? He repeated himself with pontificating grandiosity saying again, “ROYALS DO NOT GUEST EDIT MAGAZINES!!!” 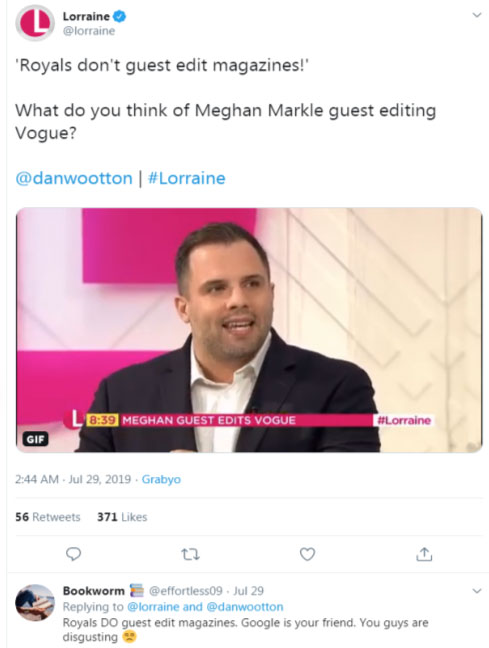 He was quickly bombarded with example after example of proof that he (A) didn’t know what he was talking about or (B) was just a mendacious, hateful, spiteful, prejudiced, predictable, atrocious bigot.

Dan wanted to make sure he spelled it out loud and clear “the leaks” “the criticisms” are coming from “the royal family” and “their staff.” He said this and it has been broadcast all over the world. 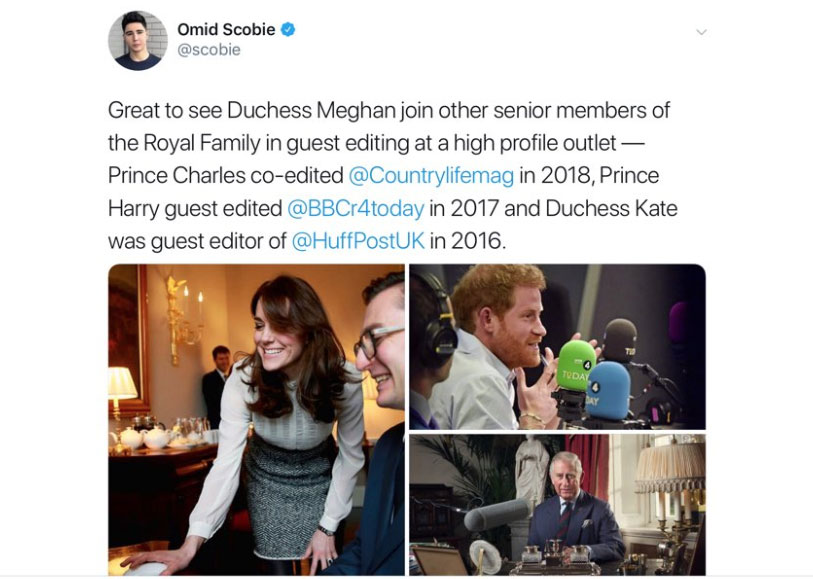 Meanwhile in #SussexSquad speak – Dan – about the backstabbers in the palace? 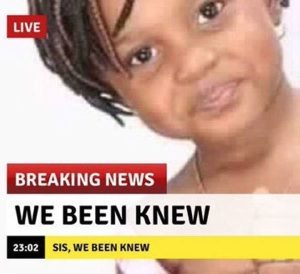 Danny Boy they know, they knew and we know. Guess what, we say I wouldn’t take nothing for my journey now. The Duke and Duchess of Sussex are going over the rainbow, crafting the way to a better world and you and all your UK press buddies should probably avoid eating chocolate pie for the rest of your lives – cuz the Squad is everywhere and we are all wondering – Ain’t you tired yet?

By the way Danny Boy, Tim Shipman beat you to the punch with the backstabbing tea.

So I said all that to say this to our beloved Duke and Duchess, as well as to “the Squad” – We are on the right side of history. Meghan and Harry are going up and away in a beautiful balloon and leaving the haters behind. This Vogue initiative has been ground breaking. Meghan’s husband is backing her up with military precision and these two have a strategy. Like we say in the Squad, Duke and Duchess are playing chess. The royal reporters and their cheering squad are playing checkers.