The Association of Commonwealth Universities (ACU) “is the world’s first and oldest international university network” composed of more than 500 Universities located throughout more than 50 countries. (@KensingtonRoyal)

ACU’s MISSION is to “Build a Better World Through Higher Education.”

Duchess Meghan is patron of this historical organization and on January 31st 2019 she officially visited one of their universities: City, University of London. Her visit was eagerly anticipated and she was wholeheartedly welcomed to the ACU networking event.

Joanna Newman, ACU Chief Executive and Secretary General, said: ‘Today was a fantastic opportunity to demonstrate how the ACU brings together people from across the Commonwealth and beyond through our unique network of universities, to advance knowledge, promote understanding, broaden minds, and improve lives. We’re looking forward to continuing to work with The Duchess as our Patron’.

Professor Sir Paul Curran, President of City, University of London, said: ‘It was an honour to welcome Her Royal Highness to City as Patron of the Association of Commonwealth Universities. City is one of the UK’s most popular universities for international students and staff, notably those from Commonwealth countries, so we were particularly proud to host her visit. Our membership of the ACU, the world’s first international university network, is something in which we take great pride. (ACU, Jan. 2019)

The main objective of the Duchess’ visit was to enable her to learn more about the main ‘areas of work” the ACU focuses on; “such as gender equity, access and inclusion, and sustainability…” In order to achieve this goal, the Duchess participated in an interactive workshop, where she visited six groups: Access and Inclusion – Disabilities, Access and Inclusion – Gender, Sustainability, Peace and Reconciliation, Refugees, and ACU Staff.

Each group except the ACU Staff group was composed of current & former scholars, researchers, and academics, who specialized in the field of study indicated by the group’s name. Participants would discuss, explain or demonstrate their work to the Duchess. The sixth group was composed of ACU staff members who “discussed how [their] strategic priorities guide [their] work, and help [them] contribute to building a better world through higher education.” (ACU, Jan. 2019)

Three recipients of the Queen Elizabeth Commonwealth Scholarship, who are presently studying in Ghana, were able to converse with the Duchess using Skype. Mr Hilary Harawo, Mr Ntani Nsutebu and Mr Almachius Rwegasira were able to join with their fellow group members in the Access and Inclusion-Disabilities group.

The Duchess’s engagement went over schedule (by 20 minutes) because she wanted to spend as much time as possible with each group.

At least two scholars shared via Twitter their experiences with the Duchess:

Ishrat Hossain a Bangladeshi PhD scholar was a contributor in the Peace and Reconciliation group. Ms. Hossain tweeted the following: “Utterly” thrilled “to be able to share my doctoral research on Buddhist-Muslim communal relations in Bangladesh-Myanmar borderland in the shadow of the Rohingya crisis with the HRH the Duchess of Sussex at the @The_ACU networking event today!”

Devika Ranjan an American Marshall Scholar studying Applied Theatre at The Royal Central School of Speech and Drama, University of London was a contributor in the Refugee group. She tweeted the following on her Twitter account: “So honored to talk to the Duchess @The_ACU about my work on migration: theatre on human rights issues, drama workshops w/displaced people, & research on electronic tagging of asylum-seekers. She said creativity is essential to integration/healing & wants to see more of my work!”

Another participant, Ms Logan Brown, from the Peace and Reconciliation group, presented the Duchess with a children’s book, Denali Dreams that she had written. Ms. Brown is a Marshall Scholar from America studying Terrorism, Security and Society at King’s College London.

The Duchess of Sussex was warmly greeted by a cheering throng, who braved cold conditions to simply get a glimpse of her arrival and departure. The Duchess rewarded a few of these enthusiastic spectators with an impromptu walkabout after her engagement was finished. 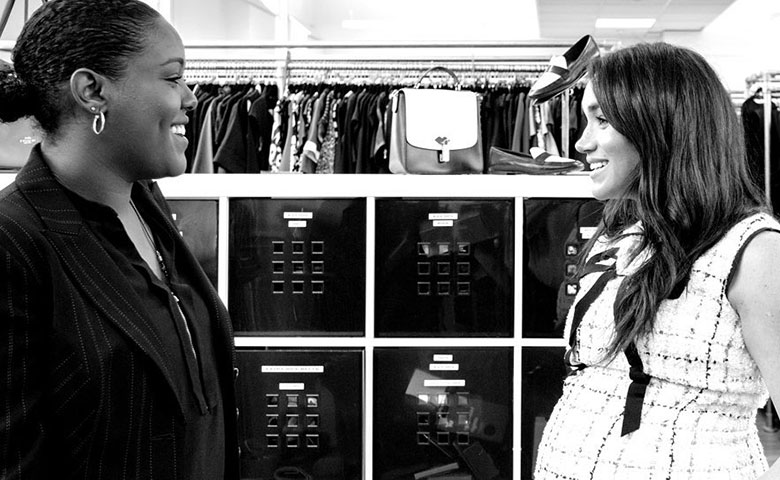