The Dawn Before The Sunrise. After a well-deserved rest from the onslaught of abuse from the poison pens and fingers of the media and online trolls stretching from the end of their Southern African tour to the Christmas 2019 period, supporters of the Duke and Duchess of Sussex were all looking forward to their return to Royal duties and to see what plans they had for the future work. Supporters even discussed possible countries where their next official tour would be. Canada and the US were high on the list.

Come January, we learnt that on 7th January 2020 “their first engagement” would be to Canada House, London, United Kingdom to thank the people of Canada.

The Duchess looked absolutely radiant as usual, they both looked very relaxed, with a certain ease about them and you could see that they were well rested. When within a matter of days, the Duke and Duchess of Sussex announced that they intended to “step back” from Royal duties, I think it is fair to say that the whole world was shocked. We later found out that their hand was forced by leaks of behind the scenes happenings to the press.

On 19th January, following negotiations, we learned that the Sussexes had come to an agreement with the British Royal Family for them to step back from all official royal roles to carve out their own path. It is important to clarify here, that the Sussexes’ plan was to sever financial ties with UK public money and still support the queen, while having some level of freedom to pursue their charitable and financial ventures. For whatever reasons, the royal family decided that a part-time role was untenable and according to Prince Harry, he had no choice but to step away.

The irrational reaction of the British media and their loyal audience didn’t come as a surprise. When it comes to the Sussexes, even benign events rise to crisis levels. It was just a different level of bewilderment at a reaction that was devoid of logic or fact, as the dissemination of latter was purposely managed by the palace to curry favor with the public.

As I write, the revision of history is ongoing; gaslighting is at an all-time high, adults have lost their capacity for reasoned and logical thought, and so-called journalists are playing reverse hide-and-seek with verifiable information. The facts are literally jumping out but, the reporters are wearing agenda blindfolds. That pretty much sums up the media milieu.

Against this backdrop, the Sussexes have been resolute in prioritizing their family’s welfare and charting a new path charitably and professionally. Yesterday March 30th 2020, on the eve of their official departure as working senior royals, Harry and Meghan provided a final update to mark the end of this chapter. There was an Instagram post thanking their online community of supporters and a statement from their spokesperson, detailing the next steps. Essentially, 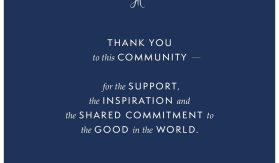 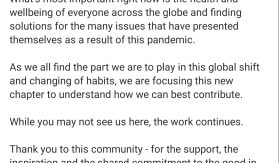 Also, the couple remain committed to their patronages and while they retain their HRH titles, they will no longer use them. Another noteworthy detail per the Sussex Spokesperson:

In other words, if you see a story or an account attributed to a royal source, a palace spokesperson or any other source within the royal household, IT IS A LIE. Simple. Harry and Meghan no longer exist or operate within the royal establishment and its apparatus, and they have duly informed us that none of those entities speak for them. They have gone further and designated two entities, Sunshine Sachs for US and James Holt for UK/Commonwealth that are so authorized. If a journalist cannot categorically attribute a quote to either of these named groups, don’t waste your time on it. With the demise of the “royal source” the media will come up with other ways to get around the lack of access. They may quote “close friends” or “a person with intimate knowledge of the matter”, and it will still be hogwash. 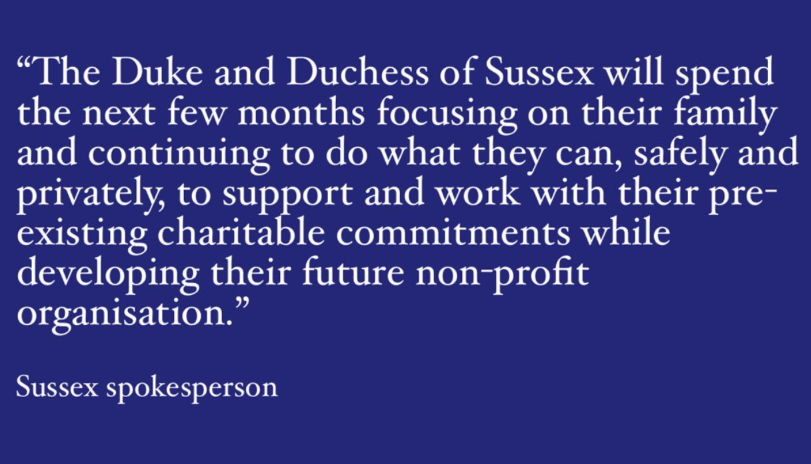 Among their supporters, a mixture of emotions at their temporary retreat is a given. For what it’s worth, I believe the couple have been wise in their decision. From an operational point of view, its good practice not to launch any new initiative in this very fluid environment. The first rule of implementation is to be able to define or at least properly anticipate contextual factors that will impact operations and output. The current environment makes that difficult, not to mention the safety considerations of staff.

Now, all the pre-written pieces about what is wrong with their new platform name and how its disrespectful to the Queen and XYZ, how their organization is trying to undermine whoever, and all the other nonsense that gets pumped out in the name of journalism, can hopefully go to their deserved graves. There was always going to be an affront. If it’s not the words, it will be the pictures, or the time of a post, or the emoji or font. The madness is past the point of redemption so, for now it’s time out. All the obsessives can find something else to consume their existence.

Hopefully, Harry and Meghan can take all the time they need to purge all the toxicity that was directed at them and nurture their precious young family, the most important thing when all is said and done. When they are ready to re-launch, we know that exciting things are on the horizon. Meghan’s commitment to empowering communities, women’s issues and girls education remains. I am sure that we will not only see different chapters of volumes already started, but new ones too. For Harry, he will continue to support veterans, young people and vulnerable groups.

Together, they will continue their conservation and mental health work and we cannot wait to see what innovations they will come up with. If we have learnt one single thing about Harry and Meghan, it is that, they do their homework and show up properly. As the saying goes, they speak softly but carry a big stick. The future looks bright for this humanitarian couple and we’ll be here to support them through the next phase. In the short term however, there is still a lot to celebrate and support.

At the end of February, Prince Harry took his Travalyst sustainable travel initiative into the next phase of development with what was reported as a very productive summit in Edinburgh. Together with partners Booking.com, Skyscanner, Trip.com, TripAdvisor and Visa, Travalyst is working to create a scoring system that will inform and equip travelers to make more sustainable travel choices. The goal is to protect the environment, to preserve the destinations so that travelers can continue to enjoy them, and also benefit the communities that support the travel industry. A win all around. The final update indicates that Travalyst is to become an independent non-profit organization. The prospects here are exciting and with the passage of time, I believe we will see great things on this front.

As Prince Harry said, their commitment to their patronages remain steadfast. As far as their support of Veterans goes, I think we can expect to see more and even new initiatives. At the Endeavour Fund Awards in early March, Prince Harry announced that the endeavour Fund is going to be working more closely with The Invictus Games. Details aren’t yet known, but it can be safely assumed that it will be something innovative that will go even further to support veterans. On Friday 27th March, Unbroken, a charity single composed by Bon Jovi and recorded in collaboration with the Invictus Games choir was released. All proceeds go to support The Invictus Games foundation. To lend your support, you can download/ stream the single or view the music video.

On Friday April 3rd, Disneynature will premiere the documentary Elephant, on the Disney+ streaming platform. It is narrated by the Duchess of Sussex, after she was approached by the filmmakers Mark Linfield and Vanessa Berlowitz last summer. From all indications and early reviews, the effort is a triumph. Disney is making a donation to the conservation charity, Elephants without Boarders, who the Duke and Duchess have worked with in the past. The anticipation and excitement is palpable and I for one cannot wait.

As the sun sets on this phase, we their supporters will be here to continue lifting them up when it rises again in the next chapter. We are drawn to them because of who they are as individuals and as a couple. No trinkets, pomp and pageantry required. A lot of us were supporters of Meghan before she became a royal. Nothing will change. We are here for her and her nuclear family. We wish them love, God’s peace and blessings and all the success in this world.

9 comments on “The Dawn Before The Sunrise”

The Curious Case of William’s Care for Harry

First trip with the Queen to Chester