Coronavirus And The Epidemic Of Royal Reporters’ Idiotic Sussex Opinions.

The last few weeks to months has seen people, communities, businesses, organizations, institutions and governments modify their norms and routines to fit the uncertainty and flux of their environments in a world that is in the grips of a pandemic. In the midst of the chaos and disruption, people are staying put as much as possible, in accordance with guidelines to slow the spread of the virus. The word of the day is ESSENTIAL; travel, personnel, services etc.

At the same time, a certain Prince and his wife have stepped away from their roles as working royals, with the blessing of the British monarch, and are currently isolating themselves from public non-essential activity, somewhere in a North American city, as are many others around the world. On their way out, they made it clear that, they will not be seen and will be focusing on finding ways to safely and privately support organizations that they are already connected with.

“…focusing this new chapter to understand how we can best contribute. While you may not see us here, the work continues.”

As of March 31, Harry and Meghan no longer have an official role with the British monarchy and the whole world knows it. For some inexplicable reason, some royal reporters have decided in the middle of all that is unfolding in the world, to throw a stupid party. It is not for lack of more pressing issues to write about. It is just something about the existence of The Duke and Duchess of Sussex that activates their brains’ irrationality and ludicrousness centers. While the monarch, her heirs and the remaining working royals are seeking refuge from the spreading contagion in their countryside luxury bolt-holes, what remaining peace of mind we have outside of the current crisis, is being rudely interrupted with nonsensical questions of “ Where are Harry & Meghan now that it matters” and equally foolish variations of it.

For all the amnestic, absent minded, willfully obtuse and all the others in the very back, and hopefully for the last time; Harry & Meghan have retired from royal work and are in North America where they said they’ll be. The Governor of California and the British Prime Minister both made it clear – stay home unless you are providing essential services. While England’s list of essential services/activities was only a quarter of California’s list, neither has The British Royal Family or former working royals listed as essential. Like everyone else, and as the government directed, Harry and Meghan are staying at home, sheltering in place and working behind the scenes for their organizations and doing whatever else they please, while observing lockdown guidelines like most responsible people.

Enter anything goes Kelly Parnell with a dumb take. In her opinion, regardless of the governments’ directives or the geographical impediment of living on a different continent, why aren’t The Duke and Duchess of Sussex in England “showing love and kindness to Harry’s Grandparents and his dad, who was infected with the virus?” and “why aren’t they supporting frontline medical staff like the Cambridges?” I don’t have the time or the desire to dissect the Cambridges’ string of COVID-19-induced PR stunts.

Kelly Parnell should know that going to “pay tribute to emergency personnel” was an irresponsible move by the Cambridges that not only could have endangered their health and that of those they came in contact with( because infectious asymptomatics exist) but which unnecessarily took essential workers away from essential duties.
Kelly isn’t even a royal reporter – she does everything from book reviews, to coronavirus lockdown survival guides, to reviewing Naomi Campbell’s airplane hygiene routine. I get it that writing jobs are in jeopardy in this corona era so, whatever it takes to make a living…But can they at least make some sense?

We can always count on propaganda queen Camilla Tominey for a hot take. According to her, Harry’s response to the pandemic has not been as good as his older brother’s. She really only had two “reasons” for her observation: Regarding #clapforourcarers, she writes “The Sussexes’ digital post appeared hollow compared to the Cambridge kids clapping” and “while Harry was announcing the postponement of the Invictus Games, the Cambridges were being lauded for making a ‘real’ difference with their visit to the 111 call center.” Really? Why postponing a week-long event that would have served as a ticking time bomb of Covid-19 infections, and thereby preserving the health and lives of the athletes and volunteers is somehow judged inferior to some ill-advised photo-op is beyond me. Also what is the basis for comparison? 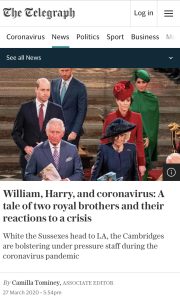 The disconnect here is stunning but not entirely surprising. The crop of royal reporters seem to be trapped in a static time capsule of ideas and action, where meaningless photo-ops and platitudes are far more palatable. It is a mindset that is yet to catch up with the modern world. With all manner of institutions adapting to telework, telemedicine and online learning, it seems a very backward and toothless argument to make against a digital anything, not to talk about the impracticality and danger of face-to-face business in this context.

For as long as we can recall the Duke and Duchess of Sussex have, through their actions, silently espoused doing good and leading by example. We see it in the way they support their patronages, their preparedness for their engagements, and the interaction on their social media site. While they still had a social media presence, the Duke and Duchess of Sussex led by example in doing good work, whether it was bringing attention to worthy charitable causes and organizations or adapting to the current need to share valuable resources in response to COVID-19. SussexRoyal was the first royal social media site to acknowledge the pandemic, its dire consequences and urged people to take the proper precautions. After SussexRoyal, the other royals’ social media sites followed with some kind of statement. Sussex Royal was the first and only royal social media site that acknowledged the emotional toll of the uncertainty of the pandemic, and offered links to get and give help. They were also first to share information on National Health Service (NHS) #Clapforourcarers.

Speaking of a digital post that wasn’t deemed hollow, The Director-General of WHO acknowledged SussexRoyal sharing The WHO’s hand hygiene guidelines and to this date, remain the only royal social media website whose efforts were acknowledged by WHO. 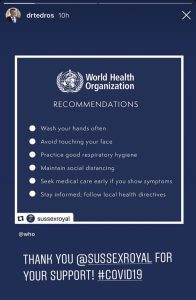 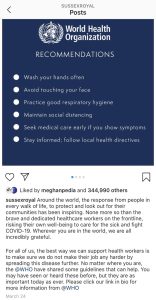 We know that in this epidemic of idiocy, the British Media (BM) cannot fully appreciate the concept of the Royal Family working behind the scenes unless there are glossy pictures to show just how hard they are working, even if we never see the yield or it underwhelmingly falls short of the hype. We don’t need to see Harry or Meghan artistically perched at their desks to know they are hard at work. We know they are working behind the scenes because, at the time of maturation, they always present the fruits or those who have benefited from their efforts share the impact.

“Though you may not see us here, the work continues,”

It is their track record. They just do it. No fuss or fanfare required. So Ms. Parnell and friends, Harry and Meghan are not scientist; we’re not expecting them to develop a vaccine to stop the virus. Yes, things are truly dire, but it’s not because Harry and Meghan have not been seen. Harry is not the monarch, nor is he the monarch in waiting. The Queen has been churning out addresses aplenty, her heir is opening field hospitals remotely, and his heir is currently experiencing another bout of “clueless jerkitis”. There is plenty of material there. Focus on that. 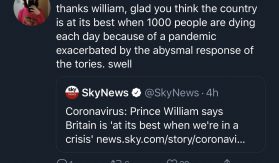 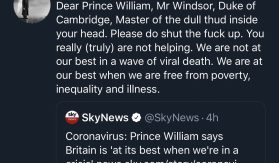 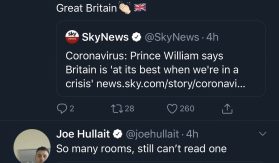 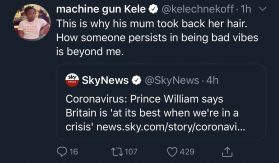 When they were senior working royals, every hack writer, using the excuse that Harry and Meghan were publicly funded, had an opinion about how they could be “better” royals. Now that they’ve stepped down as working royals, and are no longer receiving public funding, the hacks in the media still feel entitled to define the terms of The Sussexes’ private, non-taxpayer-funded life. The gall! Media hacks are showing they will remain as duplicitous in their coverage of Harry and Meghan, as they have always been – holding them to standards that not even the monarch is expected to live up to. 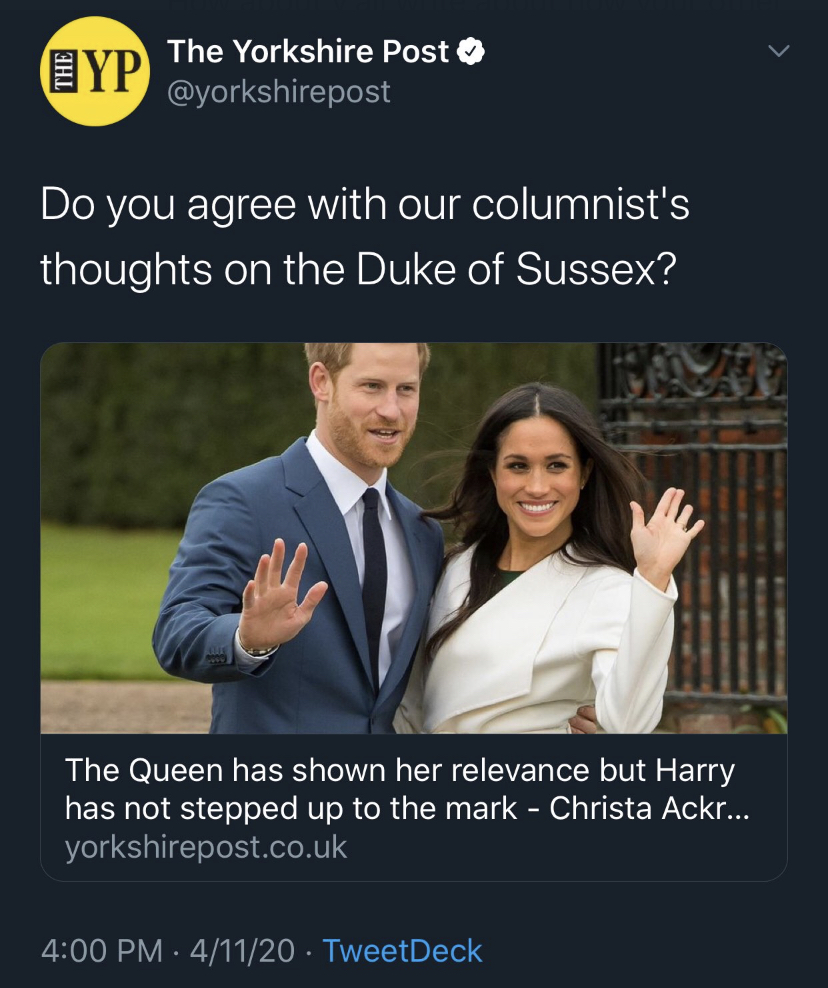 I am yet to comprehend the constant need to compare “Harry’s response” to the monarch, or the heirs. Why? Is he the standard? The same man who has been called irrelevant by these same media hacks? It is mind boggling, especially since the man no longer has official royal obligations. In Camilla Tominey’s rambling piece which really was an excuse to pick the Sussexes apart for any and everything, there was a surprising and brief moment of honesty as she wrote, “observers cannot fail to have noticed how depleted the royal family now looks without the Sussexes on side”. Perhaps they are the standard; of the empathy, energy, human touch and connection that would be apt for a time such as this.

Alas, wishes aren’t horses and beggars are certainly not going to ride. There was an opportunity to have the Sussexes “on side” part of the time but that offer was rebuffed by the monarchy. So for the love of God, please leave the Sussexes alone. They will decide for themselves what their contribution will be, and when it will be.

The coronavirus pandemic seems poised to eclipse some of devastating loss of lives suffered during recent armed conflicts. Coronavirus is not a tool to be used to by those pretending they care about the wellbeing of those not directly connected to them. It is not an opportunity for clout chasers to attempt to center this tragedy around themselves. The pandemic is not a “look at me, aren’t I benevolent?,” moment for those on the sidelines. But instead of calling out opportunists, the media hacks would further use the pandemic to hold Harry and Meghan to account for observing directives, staying home and living privately .

Fortunately, those with common sense can see the media hacks’ opinions for what they are: self-serving and irrelevant. Their advice is unwanted and their virtue signaling only resonates with people who are desperate for the validation of their intolerance. Meanwhile Harry and Meghan, the Duke and Duchess of Sussex, will continue to authentically search and carve their niche in the collective effort to better lives.