The Sun tabloid newspaper has apologised to the Duke and Duchess of Sussex after the Press regulator ruled it had breached accuracy guidelines in an article about an alleged staff parking ban at their home. 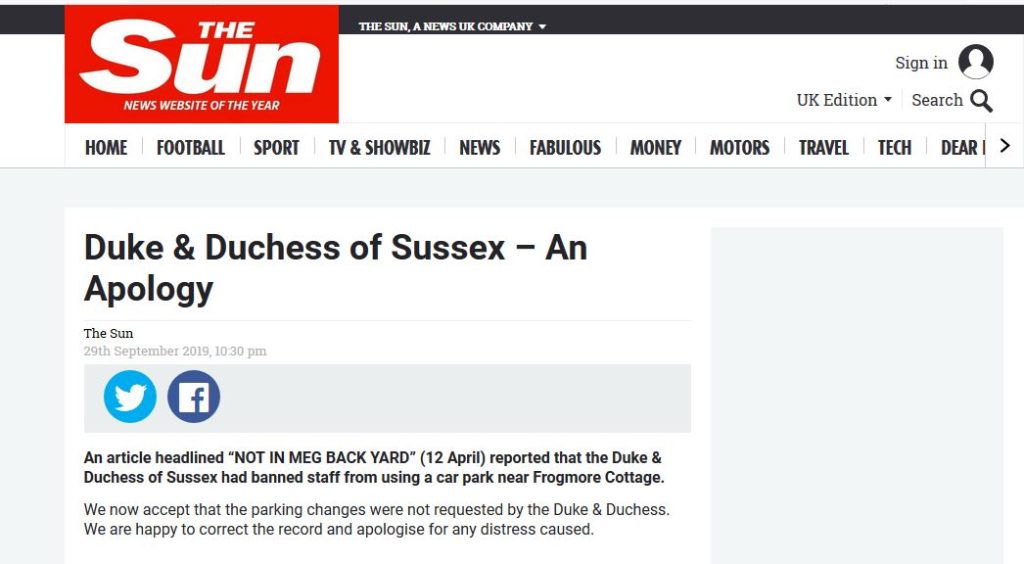 This started when around the time the Sussexes moved to their Frogmore Cottage residence, the Windsor Castle superintendent reportedly reassigned some workers who used a car park that overlooked Frogmore cottage to another one that was actually closer to the castle, at no charge. Some staff continue to use said car park. The Sun falsely reported that the Sussexes were responsible for the change and that the “low-wage staff” affected now had to pay for parking. Before the story went to press, representatives of the Sussexes told the Sun that the allegation was false and the Sussexes had no role in the parking arrangements. The Sun however decided to go with the story which was penned by a freelance writer, who was relying on quotes from “sources” who speculated about the possible involvement of the couple. 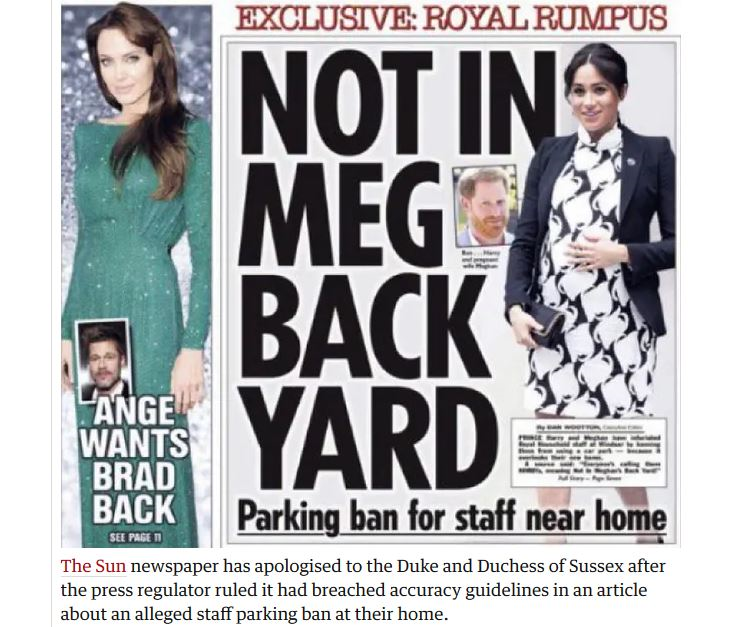 Following a complaint filed by the Duke and Duchess of Sussex, The Independent Press Standards Organization(IPSO) has now ruled that The Sun had “not provided any direct evidence” of Meghan and Harry’s involvement in the parking changes.

“In these circumstances, and where the complainants’ position had been made clear to the publication in advance of the article being published, there was a failure to take care over the presentation as fact of the claim that they had ‘imposed’ the ban.”

“The Sun was therefore found in breach of Clause 1 (accuracy) of the Editors’ Code of Practice.” 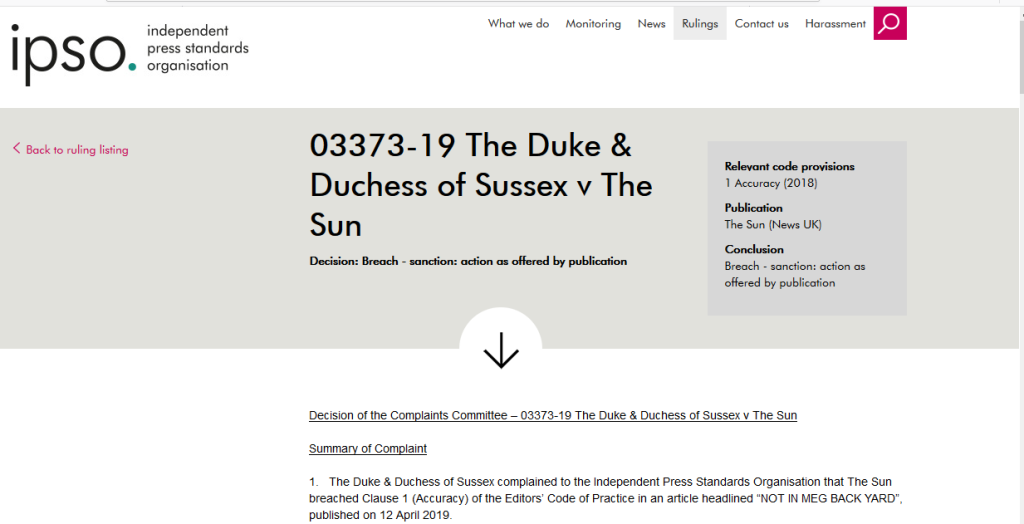 When the representatives of the Sussexes refuted the allegation of a ban, The Sun could have done some more due diligence but instead, chose to go with a damaging hit piece that they knew was factually incorrect as it pertained to the Sussexes.

This is reminiscent of the “Meg Commandment” story also in The Sun: They went to press with a story that the Sussexes had given out rules and regulations to their neighbours about how/how not to approach them etc. Again, in this instance it was false and the Palace refuted the allegation and the accuracy of the story prior to publication, but the Sun went with it anyway. It seems their calculation is whatever the most egregious-sounding headline that can drive traffic and gin up more anti-Meghan & anti-Sussex sentiment, the better. Damn the consequences. An apology 5 months after the fact, that is not even carried on the frontpage seems like a fair bargain to them.

Herein lies the problem with the archaic don’t complain, don’t explain royal mantra. The Tabloids know there are no consequences, or very little if any, so there is no incentive to strive for accuracy even when given opportunities to do so. This is precisely why the Sussexes taking a stand and drawing a line in the sand is crucial. As Prince Harry articulated in his statement,

“Though this action may not be the safe one, it is the right one… I’ve seen what happens when someone I love is commoditised to the point that they are no longer treated or seen as a real person…I lost my mother and now I watch my wife falling victim to the same powerful forces.”

Plan B: Take ANY incidental piece of information and make it a scandal/issue about Meghan

It seems the MO here is when in doubt, create a scandal and connect it to Meghan. It sounds very cynical but that is exactly what the tabloids are doing. E.g. This week, the Express put out a story about Princess Diana’s wedding bouquet and how one flower in the bouquet, lily of the valley, can be toxic. From the screen grabs below, you will see that the Princess Diana Story was written by Amalie Hendon, headlined “REVEALED: How Princess Diana royal wedding tradition has put guests in danger for decades” and published at 2:14pm on Saturday Oct., 12. Then at 2:29pm on the same day she published another story about Meghan’s bouquet but with a scandalous and inflammatory headline, “Royal wedding: How Meghan Markle’s flowers may have put Princess Charlotte’s life at risk”. 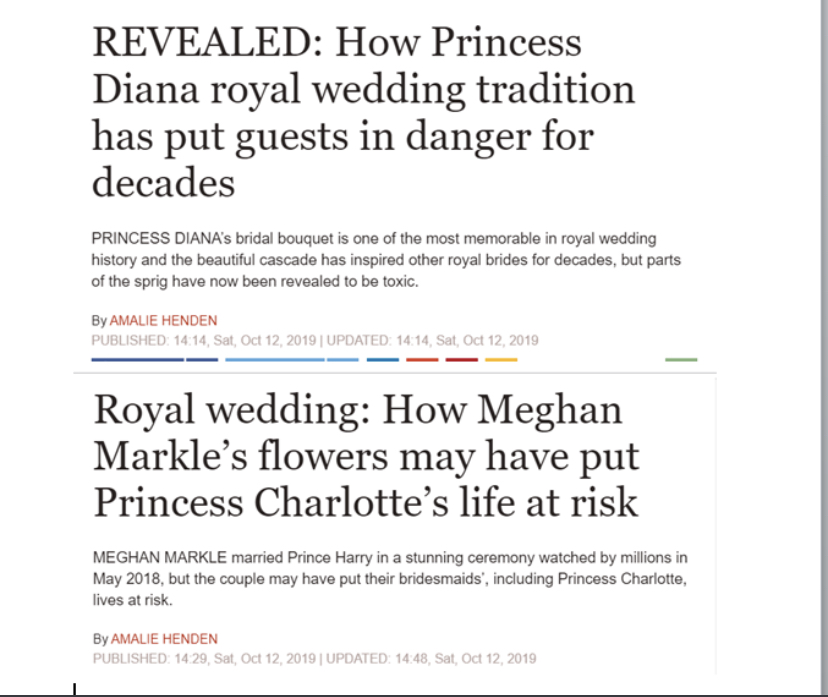 A little probing revealed to yours truly that, yet another wedding bouquet story was published by the Express earlier on Saturday, Oct 12 2019 at 9:09am, by Frederica Miller with the headline “Kate Middleton lily of valley: The deadly truth behind most royal wedding bouquets”. 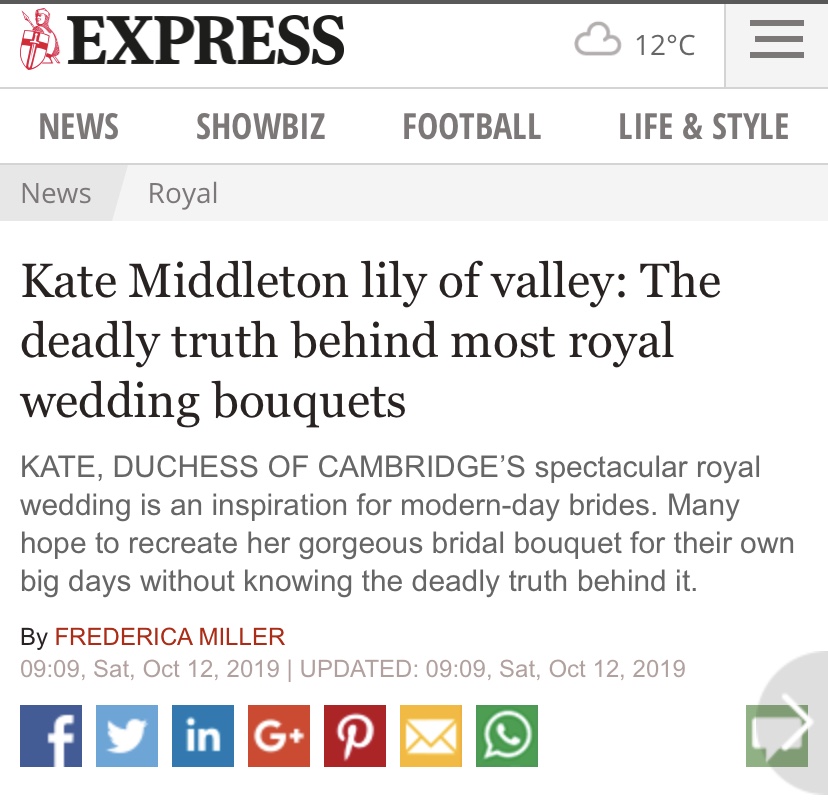 As you may have noticed, the choice of words applied to Kate are matter of fact, and the article is just informational about her wedding bouquet, the lily of the valley and its toxicity when ingested. It’s akin to a PSA, in case you were considering using lily of the valley in your wedding, you should keep pets and small children who might eat it away from it. It appears Ms. Hendon wanted to get in on the action so she wrote a Diana version of the Kate story, upping the ante by suggesting guests(note the generalization) were put at risk, and proceeded to sound the alarm bells with the Meghan version, where it really gets personal because Princess Charlotte may have been endangered.

There is so much to unpack here. First, the source of information about the toxicity of lily of the valley is attributed to the agriculturist Bonnie L. Grant in a May 7th 2018 post on the gardening website garden know how. Yes, you read that right, that is a year and half old article that had nothing to do with royal brides or bouquets, just an informational post for fellow gardeners. Why the express was randomly looking to write stories about toxic royal bridal bouquets, only God knows. Even if there was a human interest angle, why didn’t they look into what if any measures are taken to protect a bride and who holds the bouquet, since the flower is also thought to cause contact dermatitis in some people? Are lily of the valley used for bridesmaids? Should wedding guests really be worried? There is so much that could be meaningful to their readers because the lily of the valley has been used for decades and will continue to be used for the foreseeable future. But who am I kidding? Such content will not suit a character assassination piece.

Also, what about all the other children who were in the Duke and Duchess of Sussexes’ wedding party? Are their lives not valuable? Were the kids in Kate’s wedding ever at risk? Of course it’s nonsense because the flower was in the bride’s bouquet, not the children’s and since they were not having the bride’s bouquet for snack, there was real risk of poisoning. And who in their right minds actually believes that any florist worth their salt, would fail to put in safety measures at a royal wedding no less?

That Amalie Hendon and her editor, implied that Duchess Meghan could have harmed Charlotte and even depicted a sneezing Charlotte, as if to indicate distress is dishonest, criminal, irresponsible and dangerous because this is the substrate that nourishes deranged trolls, who literally threaten Duchess Meghan’s life. It is unacceptable and to Amalie Hendon, I say shame on you for writing such a lazy, disingenuous, hate-mongering piece and passing it off as journalism. That is not an honest day’s work.

In a similar vein, the Daily Mail tried to tie the termination of Duchess Kate’s long-time aide to the Duchess of Sussex. What madness! The Duchess of Sussexes does not make human resource decisions for the Cambridges, simple. Also a personal aide does not fall under the employ of the Royal Foundation so there cannot be any connection to Duchess Meghan on that account.

So why do these unscrupulous tabloids keep publishing these stories with the most tenuous connections to the Duchess of Sussex? She sells papers, period. That IS the commoditization. That is why newspapers dedicate on average 20 -70 articles a day to her. They slap her name on every outrageous story for profit without a care for how that impacts her life. They treat her as if she is not human. If you were unsure of this, look no further than the army of media types who this week, have come to the defence of Rebecca Vardy( alleged to have sold stories about her friend to the Sun tabloid) because she’s heavily pregnant. Most people are rightly shocked and outraged to hear this line of defence knowing that the Duchess of Sussex was not afforded that consideration during her pregnancy when she was hounded daily by the same press pack.

Why so? To the British media, Duchess Meghan’s commercial value superseded her humanity. I would add that their prejudice against her made it easy for them to cross that line. It is not limited to the tabloids. It is a cultural anomaly across all sections of the British media. The world sees how the British Media treat the Duchess. The British Media are the only ones in denial. As has happened repeatedly, when confronted with their dangerous and overt bias, there will be no reflection or thoughtfulness. Instead a reflexive defensiveness. The only language they would understand is money, the depletion of it, when the judgements start coming through.

6 comments on “The Anatomy Of A Tabloid Smear”

Queen Doria Is Indispensable, And You Will Not Erase Her!

Meghan, The Duchess of Sussex is Not your Slave