Article 12 of the United Nations Universal Human rights states that:

“No one shall be subjected to arbitrary interference with his privacy, family, home or correspondence, nor to attacks upon his honour and reputation. Everyone has the right to the protection of the law against such interference or attacks.”

The world has seen a line crossed by Splash News. Taking pictures into Prince Harry’s home. Even worse they took pictures into the bedroom that Prince Harry shares with his wife Duchess Meghan. This is a gross human rights violation to the privacy of Their Royal Highnesses Duke and Duchess of Sussex. It was done under the guise of journalism but is a violation of basic human right to privacy. This is not the first time that Prince Harry and Duchess Meghan have been subject to a wave of abuse and harassment by human rights violators hiding under the guise of journalism. 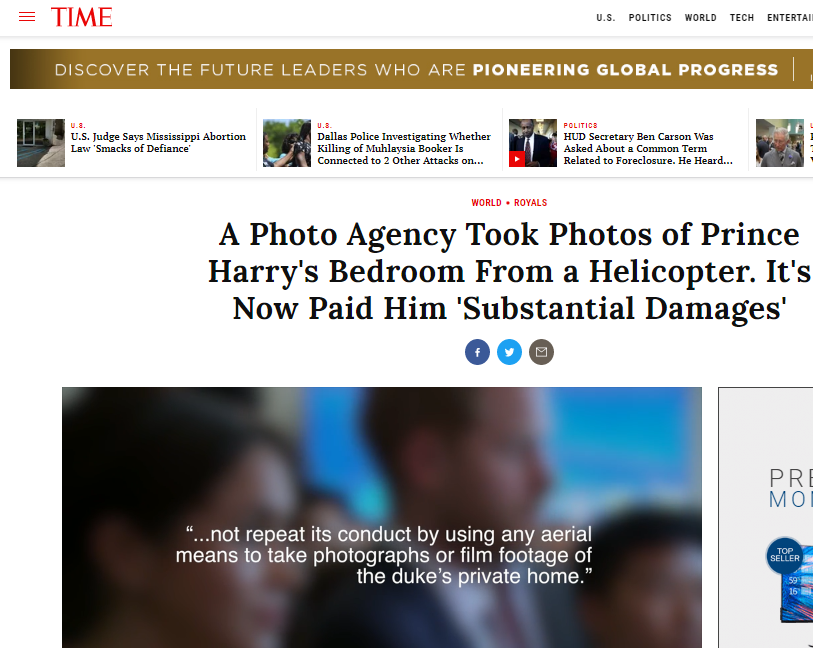 The court heard the photos, which were “published by the Times newspaper and elsewhere online”, were of living and dining areas, and included a shot taken “directly into the bedroom.- BBC

Since the United Kingdom is a land of law and order this savage behavior bordering on sexual deviancy did not go unpunished. The message from the courts was a resounding hefty penalty exacted on Splash News. The attack on the honour and reputation of the Duke and Duchess of Sussex was an attack on decorum and human civility. This violation of privacy represents human rights abuse.

The Duke of Sussex has accepted damages and an apology from a news agency which used a helicopter to take photographs of his home in the Cotswolds.- BBC

There is something very unsettling about the incessant desire to know what is happening in the life of TRH Duke and Duchess of Sussex. Peeping into someone else’s bedroom  is not just a human rights violation but has a hint of sexual deviancy. The lack of moral judgment can only be tied to sexual deviancy.

We apologise to the Duke and Duchess (of Sussex) for the distress we have caused.- Splash News 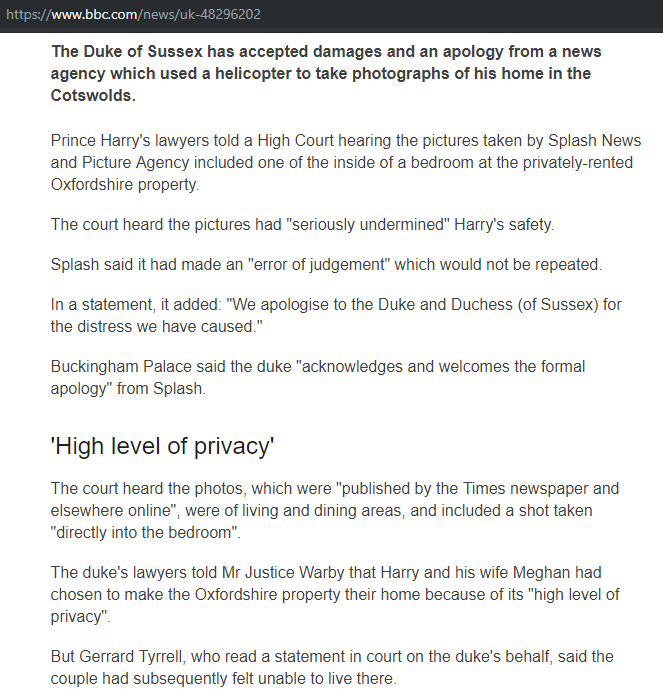 In the past Meghan’s mother Doria Ragland had to struggle past photographers in order to get to her front door. Reporters and photographers have made attempts to gain illegal entry to her home. This harassment of Doria Meghan’s mother is uncalled for. Duchess Meghan and Prince Harry and Doria and beloved Archie deserve protection and privacy.

Mr Tyrrell lawyer representing the Duke of Sussex confirmed that  Splash had agreed to pay a “substantial” sum of damages and legal costs to settle the privacy and data claims faced by the agency.

Splash would “not repeat its conduct by using any aerial means to take photographs or film footage of the duke’s private home, which would infringe privacy or data rights or otherwise be unlawful activity”.

WE hope that this serves as a cautionary tale and causes the paparazzi to pause and reflect. Human rights violators will pay for their abuses. Fair minded people understand that Duchess Meghan and Prince Harry and Doria and beloved Archie are human and they deserve respect. Prince Harry has a right to safeguard and protect his family from harassment and abuse by the paparazzi.

“Everyone has a right to their privacy, and a lot of the members of the public get it, but sadly in some areas there is this incessant need to find out every little bit of detail about what goes on behind the scenes,It’s unnecessary.- Prince Harry