Prince Harry and Meghan Markle have officially launched the website for Archewell, their non-profit organization. The couple shared an evocative message – think poem – for 2021 accompanied by photographs of themselves as toddlers with their mothers Princess Diana and Doria Ragland. 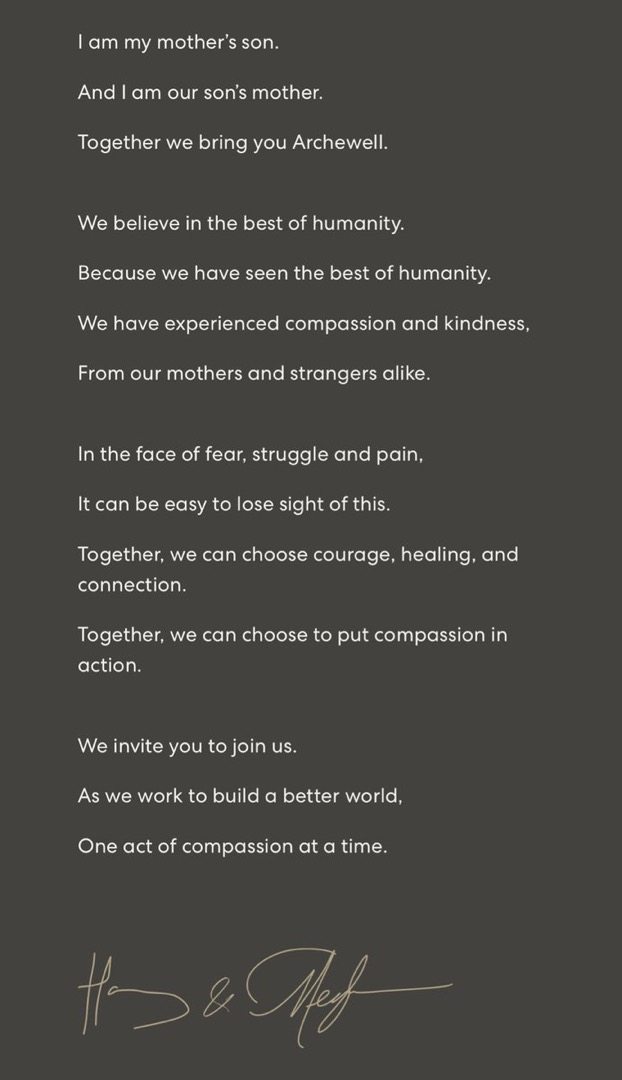 The message clearly communicates that they see themselves as both beneficiaries and inheritors of their mothers’ compassion and kindness.

“I am my mother’s son. And I am our son’s mother. Together we bring you Archewell.”

They are re-humanizing both Diana and Meghan by pointing out they are mothers of sons and that they intend to protect their son Archie as Harry’s mother protected her second son from the same malevolent forces in the institution and press.

The British media and the royal family are as usual “incandescent with rage” that they are not getting their way and will fabricate other stories to continue their smear campaign and negative narratives around Harry and Meghan. Whether it is their favorite past time of dehumanizing Meghan with deranged negative tropes or the demented attacks on their toddler son Archie to provoke them. We know their end goal is to cause a rift severe enough between Harry and Meghan and by any means necessary, so Harry can potentially feel justified and abandon his son and Meghan to return to England.

They hope to re-install him as the designated court jester and scapegoat to shield the royal family from any unwanted scrutiny from their failures, malfeasance and lack of value for the investment made by British taxpayers.

Notwithstanding his agency as a fully formed individual and adult, as a spare that is Harry’s pre-determined lot in life until his nephews and niece are old enough so he could be discarded according to plan. At which point the media hopes he would be so broken from being constantly tormented with their contrived caricatures and scripted narratives, it would become a self-fulfilling prophecy.

Hooray the macabre British monarchy soap opera must be continued! Another British royal family future monarch must be elevated by destroying another spare.
Think Princess Margaret who drank herself to death or Prince Andrew who has been accused of pedophilia and spent decades cultivating close friendships with pedophiles and child sex traffickers. Let’s not forget Andrew’s financial dealings with a few questionable figures.

Harry’s was always too independent in thought and his actions – co-founding Sentebale and creating the Invictus Games – and now having achieved financial independence from the royal family, would never find himself in the situations other spares did. In the past the firm clipped his wings, by yoking him to his less intelligent and work shy brother through The Royal Foundation. It has become clear through the lack of traction in recent Royal foundation initiatives not involving Harry and Meghan, which brother was the brain, visionary and industrious one, and who carried the foundation they formed jointly when they were both single-Prince Harry.

Based on the launch of their new website, Prince Harry and Meghan will have a big year. Their charitable works will be guided by humanity and compassion. Archewell currently includes Archewell Foundation, Archewell Audio, and Archewell Productions, each with a section on the website. The website offers not only a delightful digital experience, but insight into their current work and future work. 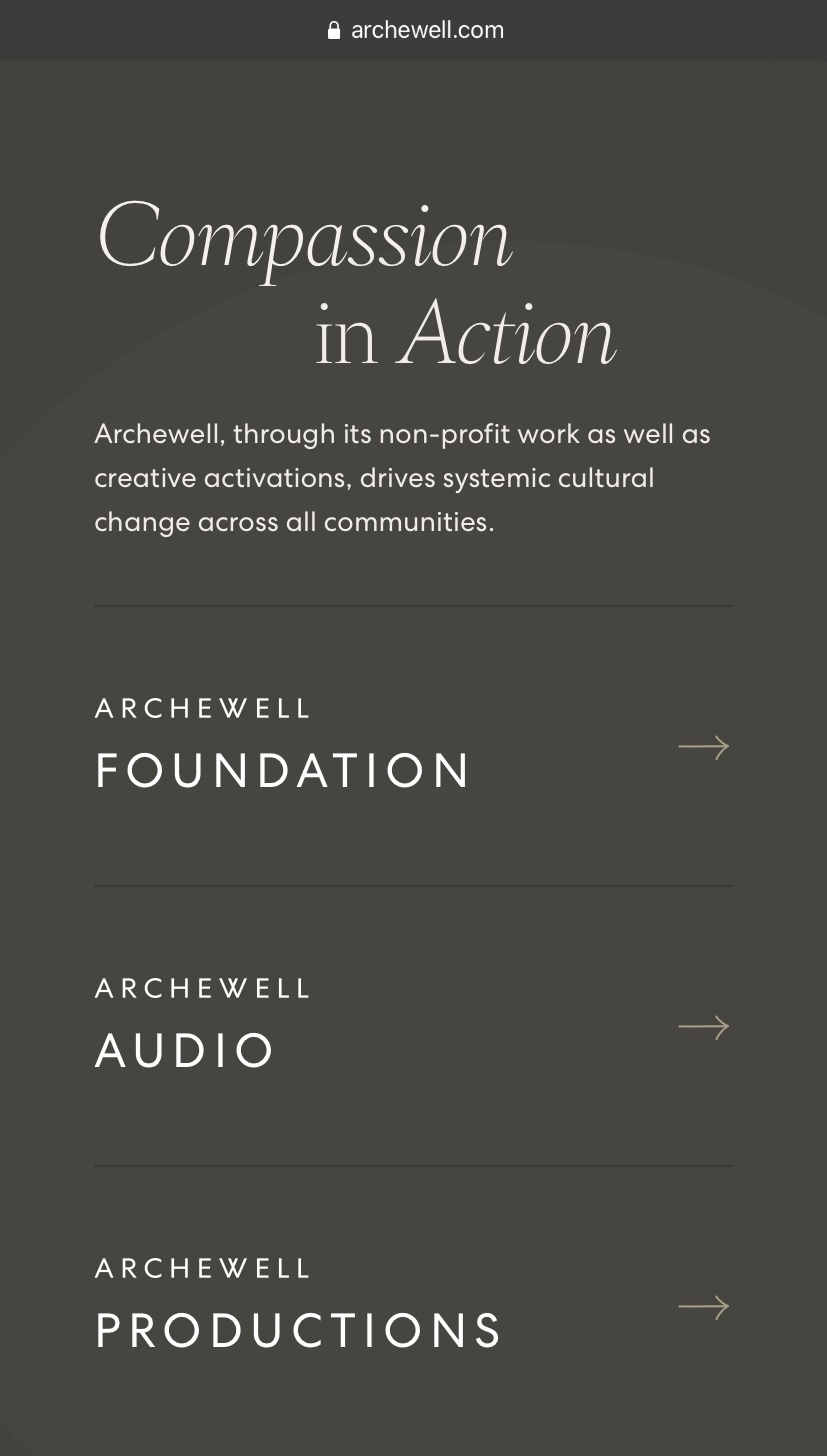 Archewell Foundation is the non-profit arm supporting core areas of interest for Harry and Meghan, like the community, food security, humane tech and mental health. At launch, they featured five organizations they have chosen to partner with and support financially.

Of particular interest is the support in humane tech. I can’t wait to see the impact they make there because it could help to fundamentally change how millions of us engage online. Also, I see it as inexorably linked to mental health for black women and girls, because a lot of harm to the mental health of black women and girls now emanate from and are disseminated via digital sources and interactions. In general the opportunity for good is immense and I’m so thrilled for Harry and Meghan on track to realize their vision through resiliency and industry.

Archewell Audio and Archewell Productions are the umbrellas for their partnerships with Spotify and Netflix, respectively. The Sussexes aim to produce and create content to inspire and uplift the global community, with creative storytelling in the case of the Archewell Productions. I can’t wait to hear and see more content from Harry and Meghan. They definitely over delivered with their heartwarming Spotify holiday podcast special, which appear to be trending and in top podcast lists in many locales in the world. 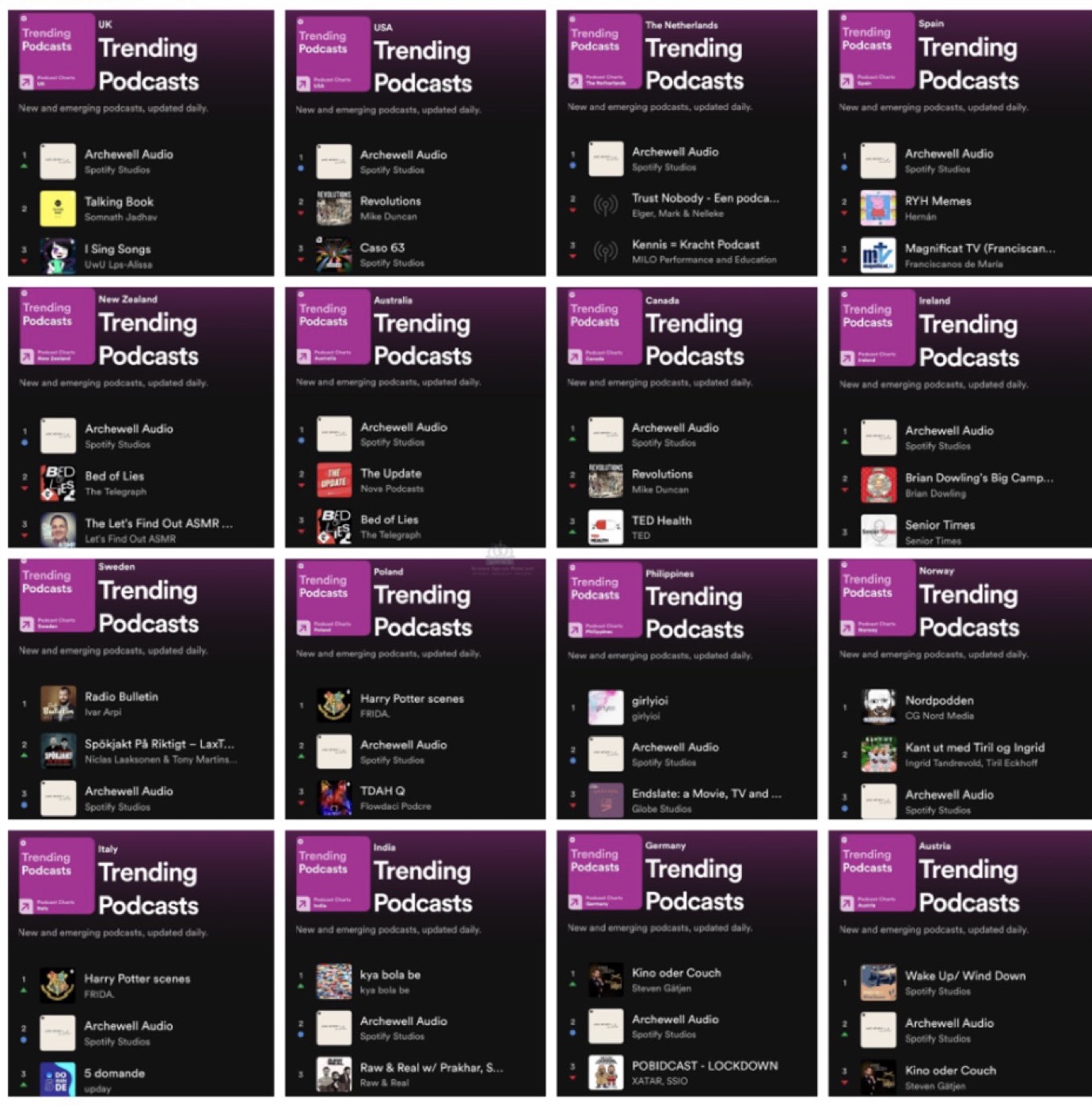 That Extra Tidbit:
The partnerships under Archewell Foundation showcase the work of the organizations, showing respect for other people and doesn’t presume to take credit for their work. Unlike recent “never before big” launches by Prince William and Kate who have shown breathtaking intellectual dishonesty in taking credit for other people’s work and presenting it as their own.

Kate took credit for existing well-documented research in early childhood and survey results by others, conflating the outcomes with her do-nothing feel good survey. It became clear her “biggest” ever UK survey for broken Britain project was a vanity survey eschewing well known scientific and survey methodology with no measurable outcomes or insights. Even while presenting other people’s work as her own you can see evidence of laziness, lack of commitment and preparedness in how she showcased the outcomes. A website presentation riddled with multiple misspelled words, which took days to correct. Truly shameful and astounding unprofessionalism on display.

William co-opted the name, work and awards by existing environmental organizations presented them as his own without giving credit to or engaging with those organizations, allegedly. It was apparent that they engaged those organizations days or weeks after the fact to avoid looking like blatant plagiarists. He presented other people’s work as the “most prestigious” environmental awards ever likening it to the Nobel prize. He announced his prize over a year ago with no framework or structures as it is apparent a year after he and his team of lazy, yes lazy incompetents scramble to put the framework for the prizes together and find people to award. Why announce something you have done no work? And the audacity of stealing the name and work of well-established organizations must stem from immense entitled hubris.

It seems this is on brand for the possible future heir and consort. Whether its giving other people’s money away and pretending its theirs, or capitalizing on harry and Meghan’s absence( due to maternity leave) to launch a “their project” Shout, when clearly Harry and Meghan did the ground work.

Bottom line, I am so thrilled that the Sussexes now have their own charitable instrument, through which to bring their innovative ideas to fruition, unencumbered by immature egotists. If in nine months during a pandemic, where most things have been restricted they have managed to accomplish this much, I can’t wait to see what is next.