The buck stops with Prince William; he is the leader at Kensington Palace and should be held accountable for the toxic work environment. Kensington Palace staff known as ‘the help’ has been bragging to tabloids that some staff members have been verbally abusing the Duchess of Sussex. According to Tatler, some staff members refer to Meghan using the sick barbaric name ‘Me-Gain’. This is the name also used by hate groups and online racist trolls.

This is the vile organization that Prince William runs; and this is the man who we in the Commonwealth are supposed to look up to for leadership? It is thought that Prince William will one day acquire the role as The Head of the Commonwealth. What type of leader allows his workers to abuse his brother’s pregnant wife? William talks about combating online bullying, but is silent when his own staff engages in the very same issue that he advocates against… despicable behavior!

‘Me- Gain’ is a derogatory term used by racist trolls. 70 % of the trolling in January and February were created by 20 accounts; which regularly use the term ‘Me-Gain’ to refer to the Duchess of Sussex. 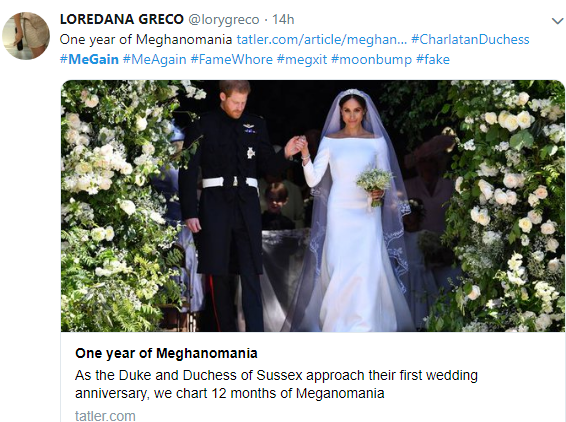 “This past week,’ it said, ‘has seen a line crossed. His girlfriend, Meghan Markle, has been subject to a wave of abuse and harassment. Some of this has been very public – the smear on the front page of a national newspaper; the racist undertones of comment pieces; and the outright sexism and racism of social media trolls and web article comments.”

The royal family announced a set of social media guidelines to create a “safe environment” against commentary considered to be discriminatory, threatening, abusive, hateful, and violent. According to Tatler, the staff itself is involved in the hateful behavior that they say they are fighting. Hopefully, the advocacy group Hope Not Hate can look into these assertions that Kensington Palace staff are boasting of using cruel language against the Duchess of Sussex.

Duchess Meghan Has Worn Many Items From Her Own Closet

Women’s participation in politics and leadership